The average interest rate on a two-year fixed mortgage has exceeded 4 per cent for the first time in almost a decade, following the Bank of England’s latest base rate hike.

An average two-year fixed rate mortgage is now at 4.09 per cent, according to Moneyfacts: 62.3 per cent more expensive than the same time last year when it was at 2.52 per cent.

It marks the first time the rate has breached 4 per cent since February 2013 when it hit 4.09 per cent.

A typical fixed five-year mortgage – now a more popular option as buyers seek to shield themselves from further rate rises – has risen from 2.75 per cent last August to 4.24 per cent today.

Mortgage rates have been climbing since December 2021 when the Bank of England began increasing the base rate in a bid to combat soaring inflation.

Over three quarters (76 per cent) of borrowers are on a fixed rate – and so the pain from higher rates will filter through slowly as their deals come to an end and they remortgage.

Eleanor Williams, finance expert at Moneyfacts, said: ‘Since the start of this month, the overall average two-year fixed rate has already increased by 0.14 per cent and has now reached 4.09 per cent.

Those on standard variable rate mortgages can see their rate increased whenever their lender chooses, and these have been moving up alongside the base.

Earlier this month the Bank of England increased its base interest rate by 0.5 per cent – the biggest single increase in 27 years.

It is the latest in a string of rises. The base rate has risen from 0.1 per cent in December to 1.75 per cent now, and the Bank’s Monetary Policy Committee has signalled it is willing to go further in order to tackle soaring inflation. 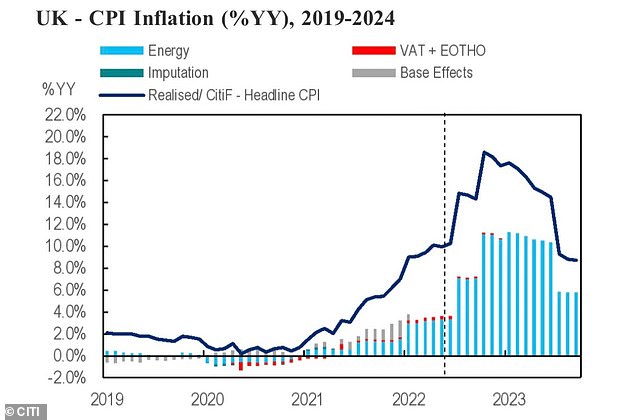 Forecast: Citi says CPI inflation will peak at 18% early next year and will remain in double digits for most of 2023

The UK inflation rate is set to peak at a near 50-year-high of 18 per cent early next year with energy prices set to soar, investment bank Citi has warned.

A 3 per cent base rate could see five-year fixed mortgages averaging 4.75 per cent.

Two years ago during the pandemic mortgages reached historic lows of as little as 0.89 per cent, as the housing market boomed.

In September 2020 the average two-year fixed rate stood at 2.24 per cent – 82.5 per cent lower than today, according to MoneyFacts.

Our mortgage calculator powered by L&C can let you filter deals to see which ones suit you best.