Average UK diesel price above £1.50 a litre for the first time ever

The UK average price of diesel rose above £1.50-a-litre for the first time ever over the weekend, according to data revealed by the AA this morning.

Experts described diesel surpassing £1.50 as ‘another milestone along a bleak road of pump prices increases this year’ and warned it could soon spark a rise in the price of goods and services.

Another milestone for record pump prices: The average price of diesel at forecourts around the UK over the weekend surpassed £1.50-a-litre for the first time on record

Motorists have been experiencing all-time-high prices at the pumps for the last three weeks.

Unleaded rose above the previous record high of 142.48p set in April 2012 from Sunday 24 October and has added another 4p-a-litre on average.

Diesel surpassed the previous record high in the same month nine years ago when it rose to 147.94p on Sunday 31 October.

Though with prices still on the rise and set to continue in the run-up to Christmas, November looks set to be another expensive month for drivers at the pumps. 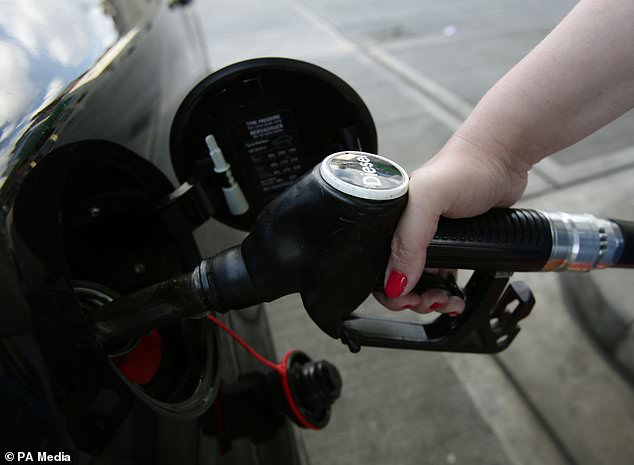 The UK average price of diesel peaked at a high of 150.50p over the weekend, which is the first time on record it has gone above the £1.50 barrier

Luke Bosdet, the AA’s fuel price spokesman warned that increasing diesel costs spark a rise in the price of goods and services if businesses begin pass on escalating costs to their customers.

‘Diesel setting a record of £1.50 a litre isn’t just yet another milestone along a bleak road of pump price increases this year,’ Bosdet said.

‘As the workhorse fuel for deliveries and craftspeople who drive to customers, it will likely usher in even higher costs for goods and services.

‘Many bigger businesses have insulated themselves against higher fuel costs with a system of surcharges on deliveries.

‘If pump prices go up, their customers pay a percentage more for deliveries, and that gets passed on to the consumer.

‘However, smaller businesses, particularly in rural areas, have little choice but to charge shoppers and clients directly. That strains customer relations and potentially puts jobs and contracts in jeopardy.’

He said the increase in the cost of diesel has been driven by a surge in oil prices, but other factors include a weaker pound and the rising cost of biofuel. 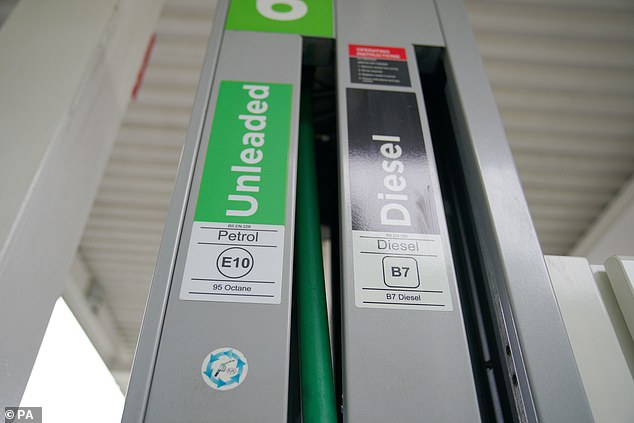 Drivers have been experiencing record fuel prices for the last three weeks, with petrol beyond the previous high on 24 October and diesel surpassing the former high on 31 October

At wholesale level in recent weeks, diesel has been up to 4.5-a-litre more expensive than petrol.

However, the difference at the pump is around just 3.5p per litre, suggesting retailers have not pushed their prices higher to reflect this.

‘Diesel drivers can at least take some comfort from knowing that their fuel hasn’t had extra cost lumped on it by fuel traders looking to balance their margins,’ the AA’s fuel expert explained.

‘Petrol drivers have been paying more because lower returns from selling discounted diesel to businesses with contracts or fuel cards have been compensated by adding higher margins to petrol.

‘Commercially, it may make sense. But, fuel prices are a highly emotive issue, being an essential worker and family outlay, and many petrol drivers take a very dim view of in effect subsidising business diesel.’

Last week, the RAC said drivers should prepare themselves for higher motoring costs in the build up to Christmas, with the recent growth in oil prices showing no sign of easing and pushing the price of fuel even higher than it already is.

‘Drivers are desperately in need of some respite at the pumps, but it’s hard to see when that’s going to come and it could well turn into an excruciatingly expensive winter for drivers,’ RAC Fuel Watch’s Simon Williams said.

He added: ‘The combined effect is going to be hard for many families on lower incomes who depend on their cars day to day.

‘There will also be a very unwelcome impact on businesses, which tend to be very dependent on diesel, and, in turn, this will lead to a knock-on effect on retail prices potentially adding more fuel to the fire of rising inflation.’

Record fuel prices have come at a time when Britons and already facing soaring living costs.

Supermarket price inflation has reached its highest level for more than a year while energy bills have also soared following the recent increase in the industry price cap.

The financial squeeze that Britons are facing this winter is thanks to inflation driven by labour shortages, rising energy costs and gaps in global supply chains as the coronavirus pandemic subsides.

Exclusive research for the Daily Mail by the Centre for Economics and Business Research (CEBR) reveals how inflation will cost the typical family of four an extra £1,800 by the end of this year, while a retired couple can expect to see living costs rise by more than £1,100, and a lower income couple could be stung by nearly £900.

‘The high prices drivers are having to endure at the pumps is also coming at a time of rising domestic energy costs and in turn inflation, which risks making the coming winter a horrendously expensive one, especially for those on lower incomes, RAC’s Simon Williams said today.

‘The fact used car prices are so high also means that it’s even more costly for many drivers to upgrade to newer, more efficient vehicles to save themselves money.

‘Our advice to all motorists is to shop around for cheaper fuel and drive as economically as possible – doing both these things can help keep costs in check, at least a little.’

1. Make sure the vehicle is in tip-top running order

Regular maintenance and servicing improves the efficiency of your vehicle, and therefore can improve your fuel consumption.

Ensuring your tyres are correctly inflated is key to making your car run efficiently. Check the owner’s manual or a sticker on the door sill to find out what the optimum pressures are for your vehicle.

Many modern motors are fitted with adjustable driving modes. If yours does it is likely to have an ‘eco’ setting, which restricts how quickly the car accelerates but will help reduce fuel consumption.

4. Be gentle on the throttle

If you have a car without adjustable driving models, try to be as easy on the throttle pedal as possible when you can.

Excessive speed is the biggest fuel-guzzling factor so having a light right foot and ensuring all acceleration is gentle is very important to fuel-efficient driving.

When you set off from a standstill, such as at traffic lights and junctions, try not to react like you’re on the starting grid at Silverstone.

5. Use the highest gear possible

The RAC says that the biggest secret to achieving high mpg (miles per gallon) is driving in the highest possible gear for your vehicle while keeping within the speed limit.

‘The best advice in urban areas is to change up through the gears as quickly as you can with the lowest revs possible, probably at around 2000rpm,’ it says.

Heavy acceleration will sap fuel economy, but braking too heavily also has the same impact, as you can use less fuel by coming to a standstill more gradually.

This requires a driver to anticipate traffic flow ahead, but is a great way of limiting fuel use.

While many will believe that using cruise control functionality will provide the lowest fuel use, this isn’t always the case.

Cruise control is most likely to benefit mpg on motorways with a constant speed and a flat surface.

However, if you were to use your cruise control regularly and not on flat roads, you would see fuel consumption increase.

‘This is because your cruise control would be slower to react to gradient changes, meaning when reaching the brow of a hill – at which point you would normally take your foot off the accelerator to maintain more of a constant speed when descending – your cruise control will keep the power on for a little longer as it’s unable to see the gradient change in front of you. Driving in this way regularly would lead to worse fuel consumption,’ says the RAC.

8. Avoid using the air-con and heater

Don’t use your air conditioning unless you really have to as it uses engine power and therefore increases fuel consumption.

This shouldn’t be an issue in these cooler months, though using a car’s heater will have a similar impact, with it running off the engine power and therefore lowering fuel economy.

Dress accordingly for the weather, is the best advice.

9. A warm engine is more efficient, so combine journeys

Once an engine is warm it will operate most efficiently, whereas several cold starts will increase fuel consumption.

So if you have a number of errands or trips in a day, try to do all of them in one go.

While this isn’t going to make the biggest difference to your mpg figures, emptying heavy clutter from your car will fractionally improve its fuel economy.

And if you’re not using roof bars and a roof box, take them off as it could make your motor less drag efficient.

According to the Energy Saving Trust, an empty roof rack adds 16 per cent drag when driving at 75mph. At the same speed a roof box adds 39 per cent, making your vehicle much less fuel efficient.

Driving with an open window also has a similar effect.