Average US deaths have not surpassed 1,000 in three weeks as average daily cases fall to 6-month low

Coronavirus cases and deaths are continuing to plummet across the country as more and more people get vaccinated against the disease.

On Tuesday, the U.S. recorded 40,733 new infections with a seven-day rolling average of 47,704, which is the lowest number seen since October 9, according to a DailyMail.com analysis of Johns Hopkins University data.

The figure is not only far below January’s peak of about 247,000 average new cases, but also below even the July surge, when daily cases were averaging about 68,000.

A total of 933 coronavirus deaths were also reported on Tuesday, marking the fourth day in a row that fatalities have been below 1,000.

The seven-day rolling average currently sits at about 723 deaths per day, marking the third-straight week that the average has been a three-digit figure.

Just four states – Hawaii, Louisiana, New Mexico and Wyoming – are reporting an increase in COVID-19 infections with all other states are either holding steady or seeing a decline.

On Tuesday, the U.S. recorded 40,733 new coronavirus infections with a seven-day rolling average of 47,704, the lowest number seen since October 9 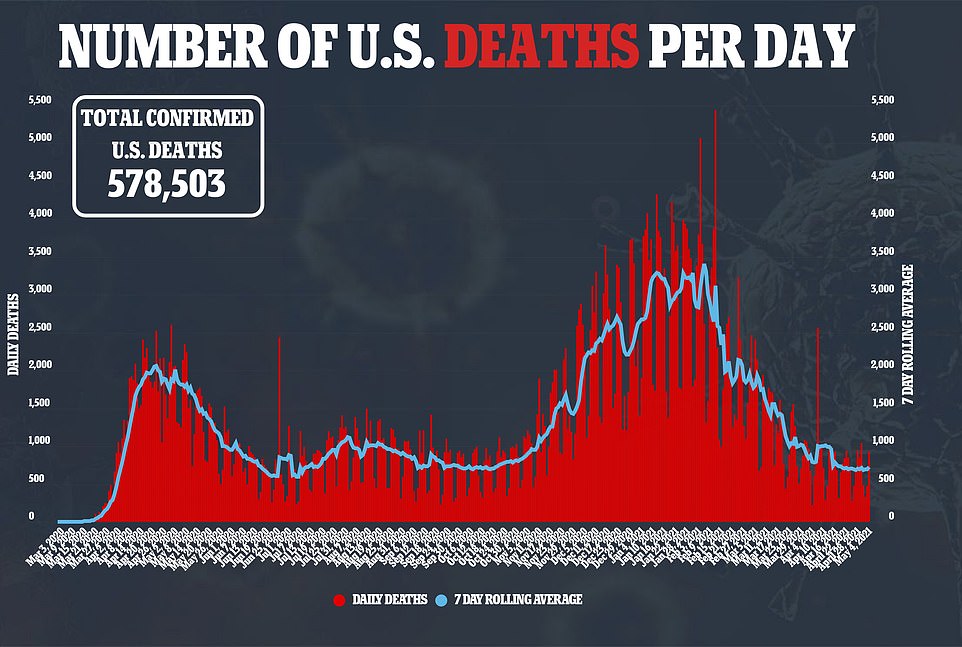 Additionally, 933 COVID-19-related deaths were reported, marking the fourth day in a row that fatalities have been below 1,000 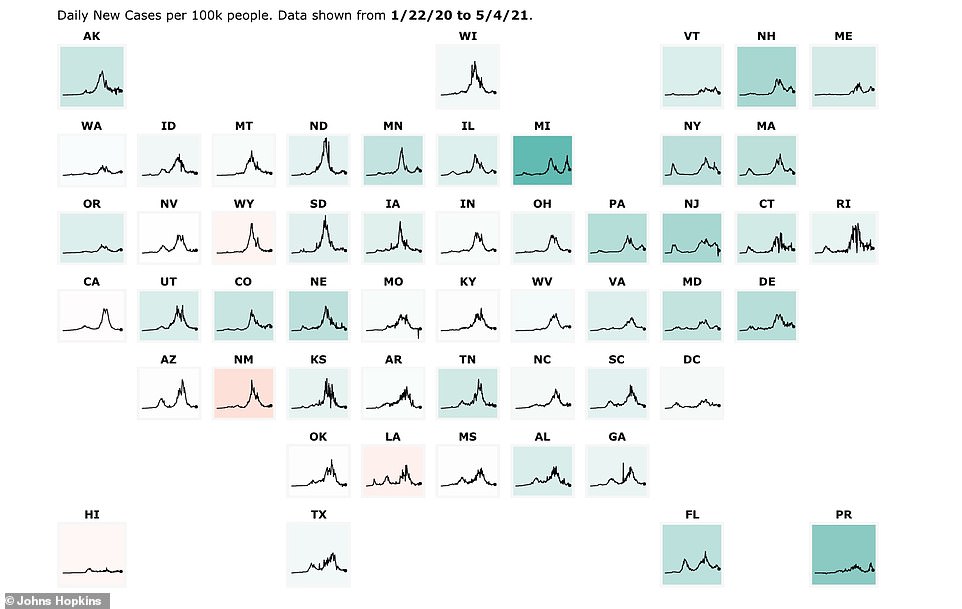 Coronavirus cases in the U.S. have dropped by about 80 percent since the peak in January and deaths have declined by 78 percent.

Not only that, but the seven-day rolling average for fatalities has decreased regularly since the start of 2021, a DailyMail.com analysis found.

Many public health experts say the decreasing numbers are due to the rollout of COVID-19 vaccines.

As of Tuesday morning, 147.8 million Americans – 44.5 percent of the population – has received at least one dose and 106 million – 32 percent – are fully vaccinated, according to data from the Centers for Disease Control and Prevention.

All three vaccines approved by the U.S. Food and Drug Administration for emergency use authorization – Pfizer-BioNTech, Moderna and Johnson & Johnson – were close to 100 percent effective in clinical trials at  preventing severe illness, hospitalization and death. 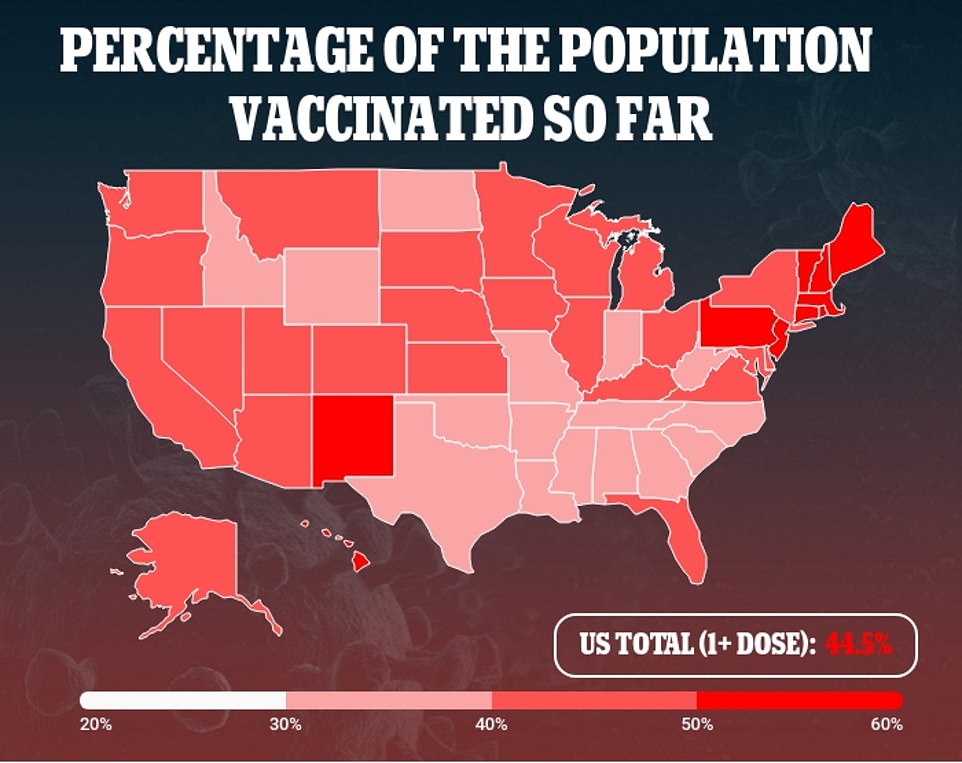 Health experts say that vaccinations have helped drive down cases and deaths, with all three approved vaccines nearly 100% effective at preventing severe illness and death 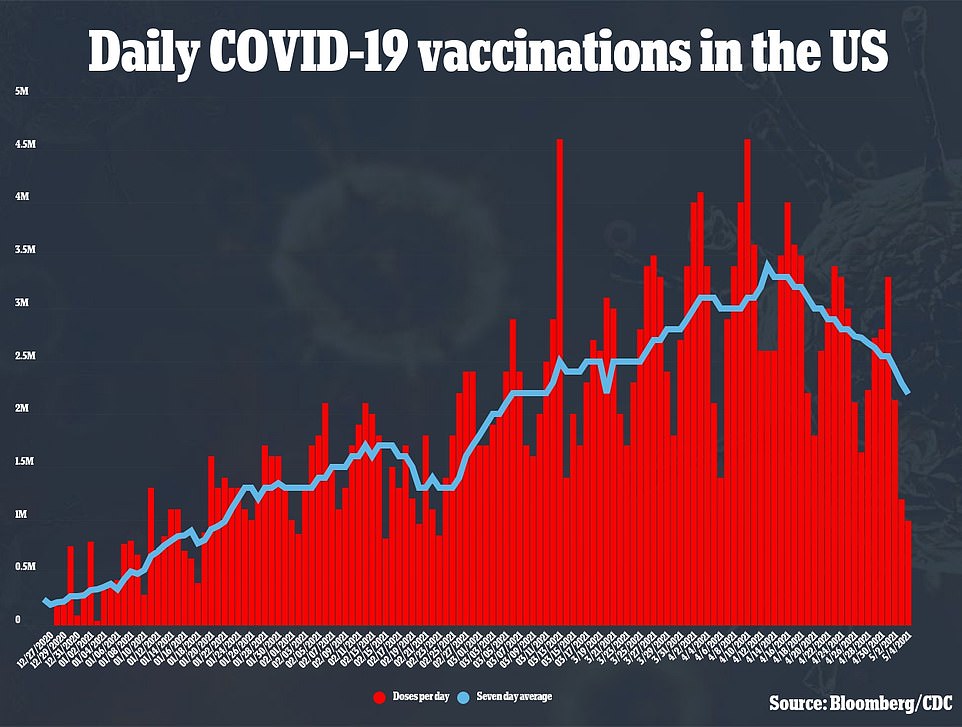 As more people become vaccinated, doctors say that cases and deaths have stopped yo-yo-ing up and down every few weeks

This has led to death rates among particularly vulnerable populations dramatically falling, such as among senior citizens, Dr Amesh Adalja, a senior scholar at the Johns Hopkins Center for Health Security, told CNN.

‘If you look, for example at populations that have been highly vaccinated like nursing home residents, you will see that deaths in nursing homes have plummeted, and overall, the death rate has been falling over time,’ Adalja said.

‘It’s really a function of how many of the high-risk individuals have been vaccinated and that is becoming more evident.

‘With the vaccine, it’s a little bit different because if you go to a nursing home and you’ve vaccinated the whole population, it’s going to take a while for them to be fully vaccinated and have that protection,’ he said.

‘Really to see the full impact of the vaccines, you want it to be two weeks after the final dose of whatever vaccine they’re getting.’ 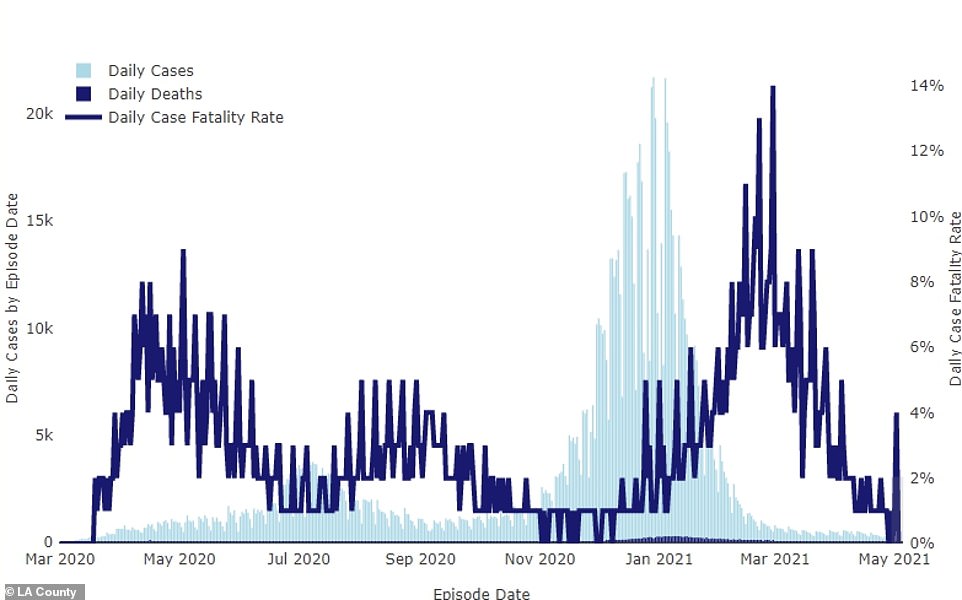 During the height of the pandemic in January, Los Angeles County was reporting as many as 17,000 new Covid infections per day and 300 deaths. On Tuesday, the county recorded just 273 new cases and 18 deaths 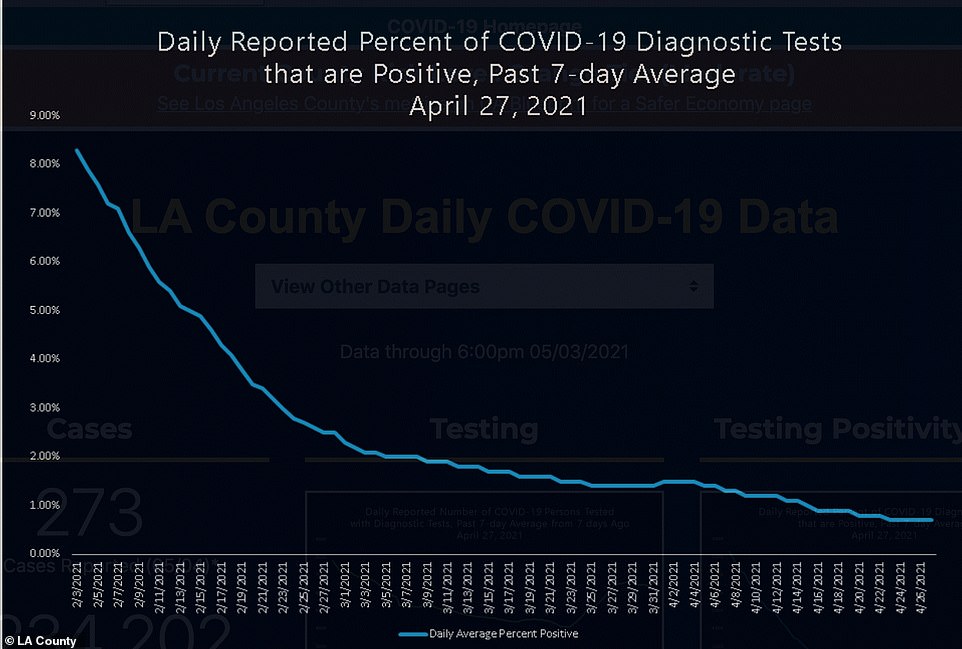 Meanwhile, former epicenters have been seen sharp declines in cases and deaths.

During the height of the pandemic in late January, Los Angeles County officials reported a death due to COVID-19 every eight minutes on average, about 300 per day, and a new infection every six seconds, as many as 17,000 per day.

However, on Tuesday, the county recorded just 18 deaths and 273 new cases, some of the lowest numbers seen since the start of the crisis.

On Tuesday, Los Angeles County was declared eligible to move to the yellow tier, which is the least restrictive tier of the state’s color-coded designations.

In a statement on Tuesday, LA Mayor Eric Garcetti said the progress ‘is a tribute to everything Angelenos have done to stay safe, stop the spread, and defeat COVID-19.’ 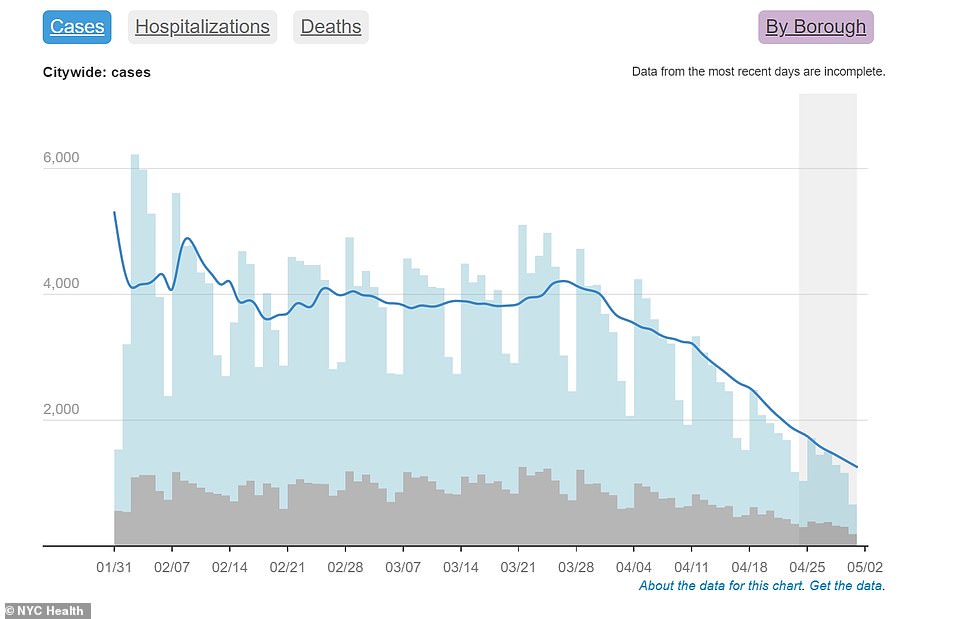 Coronavirus cases have declined by 65% in New York City over the last month from more than 3,500 cases to 1,256 cases recorded on Tuesday 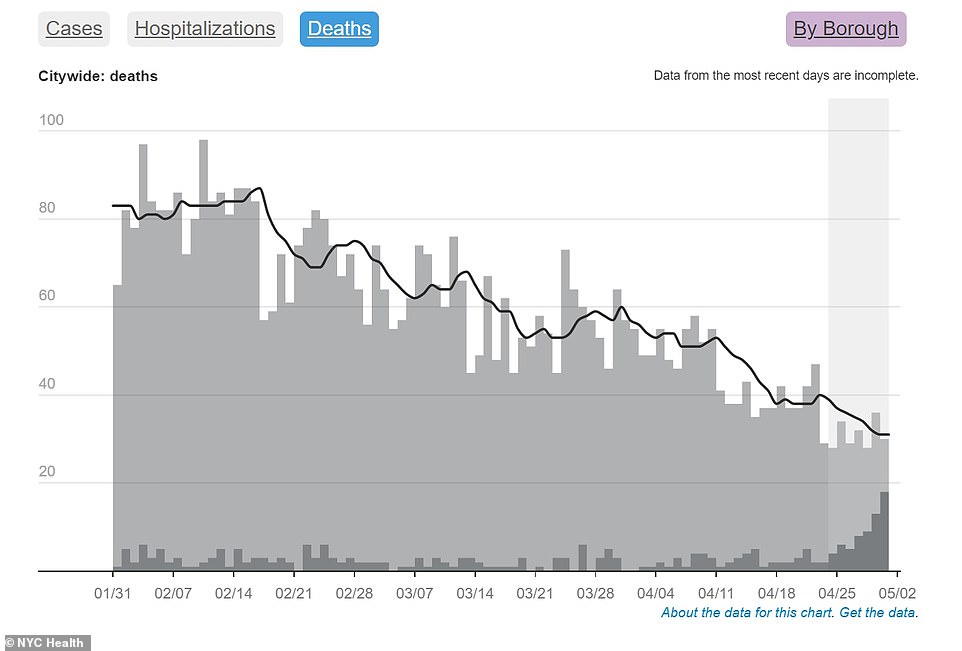 Deaths have also fallen drastically in the former epicenter, which saw about 60 COVID-19 deaths per day one month ago to just 22 reported on Tuesday

New York City is also seeing a drastic decline in cases and deaths after holding steady for weeks.

Over the last two months, cases had plateaued between 3,500 and 5,000 average cases per day and there were about 60 fatalities per day.

This led Mayor Bill de Blasio to declare on Thursday that New York City is expected to be ‘fully reopen’ for business on July 1.

‘This is going to be the summer of New York City,’ he said on MSNBC’s Morning Joe.

‘You’re going to see amazing activities, cultural activities coming back. I think people are going to flock to New York City, because they want to live again.’ 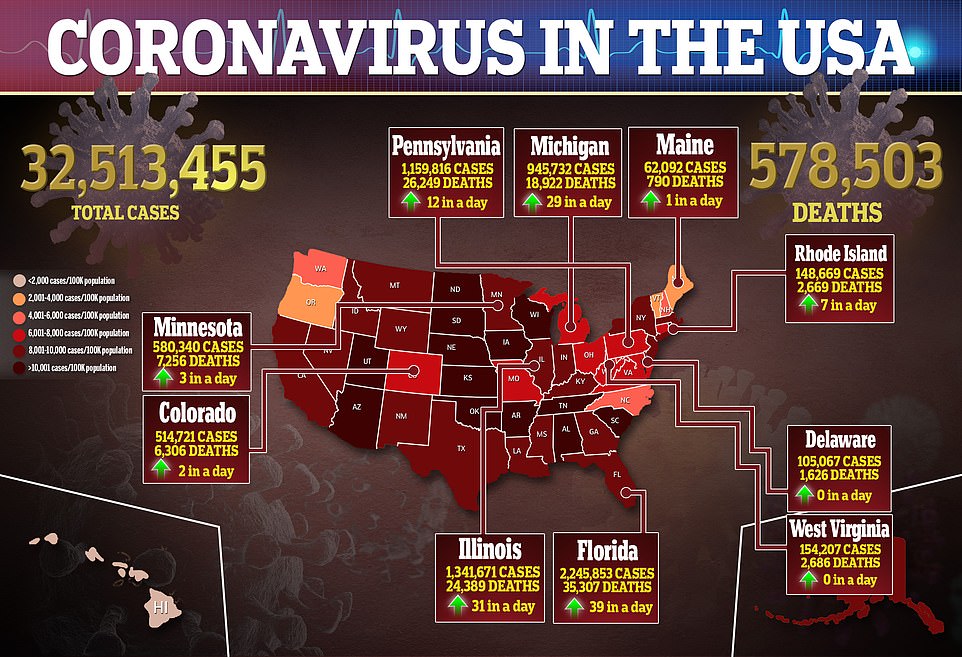