Axate: Would you pay 20p to read an article rather than subscribe?

‘I’m a classic news junkie. I kind of want them all and having to pick one or two is really difficult so I manage without which is a real shame,’ says Dominic Young.

The founder of Axate thinks he’s found the solution to this problem of what online news site or app to pay to read, with his service that lets users pay pennies to read an article that would normally be behind a paywall.

Subscription paywalls are now part and parcel of the media landscape, as many online publishers seek to rely not just advertising and ask their readers to pay for news and journalism.

But in a world of Netflix, Spotify and Amazon Prime, subscriptions can swiftly add up, so what if there was a middle way? By letting people pay 20p, for example, to read an article, or a small sum for a day pass, Axate aims to deliver one.

‘I personally don’t think there’s one single model that works for all media. I think most payment models try to shoehorn people into one way of behaving when that’s not right,’ he says.

Plenty of people have bandied the idea of micropayments around over the years without them taking off, but Young thinks this more casual approach has considerable mileage, despite subscriptions dominating the way people are charged.

The cost of reading an article is set by the publisher and Axate’s system includes a travelcard-style price cap, and once readers hit that any more articles read are free.

This could let a publisher charge up to a cap that was the same as their weekly or monthly subscription, for example.

Axate has gained attention through its crowdfunding campaign on Crowdcube, which has raised almost £400,000 and valued it at £11.3million. It currently works with some local and other smaller publishers, but can it persuade some of the big players to get on board and change how people consume news?

The question, Young had mulled before starting Axate was what if there was a way for consumers to only pay for the articles they want to read?

For anyone who reads articles online it has become increasingly obvious that the days of an ‘everything on the internet is free’ mentality are numbered.

Among some publishers there has been a distinct shift from an entirely free ad-supported model to a subscription paywall one, this can be either with a freemium element of a certain number of articles free first, or a hard paywall where nothing can be read without paying.

Subscriptions may help businesses make a profit but casual readers are left locked out and it can be impossible for people to read important investigations without paying a monthly fee.

‘I think news is like coffee and sandwiches. Asking people to be more formally considered about it almost guarantees a large proportion will walk away

‘The idea for Axate was born more than 10 years ago when it became obvious to me and others that neither advertising nor subscription on their own would be enough. What can we do in the middle? That’s a question that has not left me,’ says Young.

It wasn’t just his experience of the media industry but his own personal consumption of news and other services that crafted the idea for Axate.

‘The things I subscribe to are things I need the whole time and give me all I need, like Spotify or my phone.

‘The things I don’t subscribe to is where I need lots and lots of things and I don’t want to be too restricted to just one, or my need is variable some days more than others.

‘I think news is like coffee and sandwiches. Asking people to be more formally considered about it almost guarantees a large proportion will walk away.’ 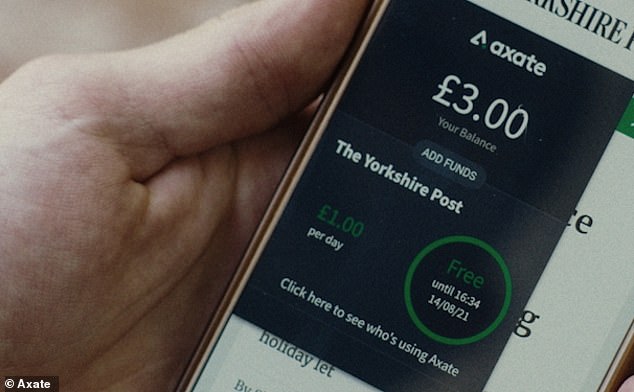 Interestingly, considering that comparison, Pret launched a coffee subscription last autumn. But while that has attracted thousands of customers, people paying for their coffee this way is a fraction of the casual footfall it has on a daily basis and if Pret only sold drinks by subscription its sales would slump.

Although the logic of a payment alternative may make sense, Young, is aware that big publishers make considered decisions and are unlikely to upend any current systems at haste.

But he says that Axate can play into this by potentially sitting alongside an existing model.

‘You don’t have to suddenly have a massive shutdown. Down comes the paywall, lock everyone out, doing something very disruptive and hostile,’ he says.

‘It’s important to me that publishers implementing Axate can do so without that turbulence… and adding options they can adjust and evolve as their products, their relationship, their audience develops and also their ability to invest more in the product.’

Once a user signs up to Axate, they can go to a publisher using the system and choose an article to read and pay from the money pot in their account.

Axate does not charge any upfront fees to readers and instead gets a cut of the revenue from publishers.

Currently, this pay-as-you-go way of reading journalism can be used for 15 publishers, among them are some local news websites, including the Yorkshire Post, and the music and celebrity site born out of popular email newsletter Popbitch, but it is yet to roll out to bigger name publishers.

The charges are set by the publisher and could be 10, 20 or 50 pence for an article, for example. Some, such as the Yorkshire Post, offer a daily pass rate.

Axate suggests a benchmark but publishers are given the freedom to adjust the price and crucially cannot charge different prices for different articles.

Additionally, the company has introduced a travelcard-style price cap. Once readers hit that upper limit over a certain period of time, they can then continue to read a site for free.

‘It would be perverse to punish people for reading a lot. You want to encourage them to read a lot to give them better value for money when they do,’ says Young.

Most importantly there is no ongoing commitment. Young likens it to ‘cup of coffee-type money’ spending, with the average amount put in around £3.

‘[The money] doesn’t get taken away from you every month regardless of what you’re doing, which is one of the main things people are nervous about with subscriptions.’

Can Axate turn paying for news into profits?

Axate isn’t the only company to try and make casual payments work for journalism. Dutch company Blendle, dubbed the ‘iTunes of journalism’ when it launched seven years ago, was recently bought by French peer Cafeyn.

However, in 2019 it ditched its micropayments to lean on premium subscriptions because it failed to turn a profit.

Axate is not yet profitable and its recently launched crowdfunding campaign will help to fund its ongoing operations and expansion. With crowdfunding, personal investors take a small stake in a fledgling business, alongside founders and others who have backed it.

Crowdfunding has become a popular way for early stage companies to raise cash, creating a pool of small investors backing something they are interested in, and raising a company’s profile.

Young says: ‘It really is about growth. I think we need to be ready to be in scaling mode, because if we do sign up a really high volume publisher, you can expect the numbers to quite rapidly increase.’

‘We think this funding will take us past that point. We may or may not need to do additional fundraising after that. We need to scale up customer and technical support as we grow. The idea is for Axate to be a facilitator for a lot of people rather than becoming itself a big thing.’

Axate has already beaten its £350,000 crowfunding target with over a week to go until the round closes, raising £399,500 at the time of publishing this article.

It says it has also raised £2million from private and media industry investors.

The idea clearly resonates with people – and Axate says it has 31,000 users – but it is unlikely to really gather steam until a big hitter in the industry takes a punt on readers paying for news online this way.

That said, it is perhaps start-up journalism operations that have the most to gain from small payments to read their articles, allowing readers to support them without taking a subscription and mediating the difficulty of relying on online advertising, which works best at scale.

Young is convincing and optimistic about the future of news which will undoubtedly play well with publishers, but will they go for it? He seems to think so.

He says: ‘I think the big subscription publishers are open to the idea of expanding their customer base, opening up new revenues but are cautious because of their subscriber base and they want to protect it. The pathway in implementing something like this is a little bit slower for them.’

Axate’s crowdfunding campaign can be seen here. It closes on 21 October.