Immersed up to her neck in a dark viscous liquid, Sulfiya smiles in delight, confident that the fetid substance will cure her painful condition.

Sulfiya, a Russian woman in her 60s, has travelled to Azerbaijan’s north-western city of Naftalan in the hope that crude oil baths at a local sanatorium will end her years of suffering from polyarthritis, a disease affecting the joints.

‘This is so pleasant,’ she enthuses, despite the reek of engine oil.

Her naked dip in oil heated to just above body temperature lasts 10 minutes, after which an attendant scrapes the brown oil off her skin and sends her into a shower.

A man bathes in a tub filled with Naftalan crude oil during a treatment session at Sehirli Naftalan Health Centre in Azerbaijan, 186 miles from capital Baku 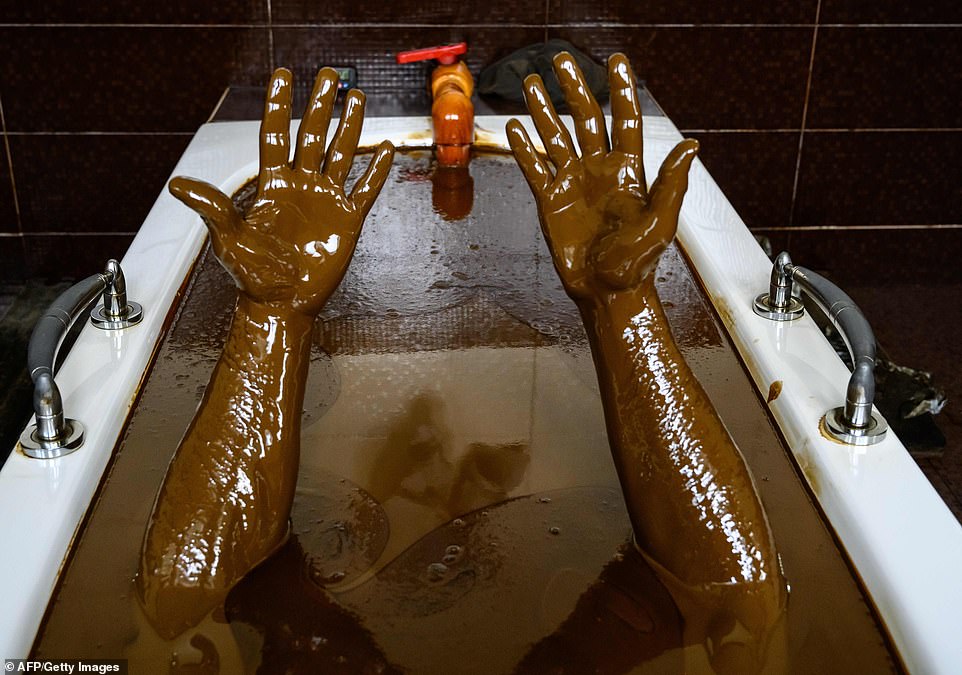 The crude oil that comes from subsoil reservoirs in Naftalan is not suitable for commercial use. It is instead used to treat gynaecological and neurological issues 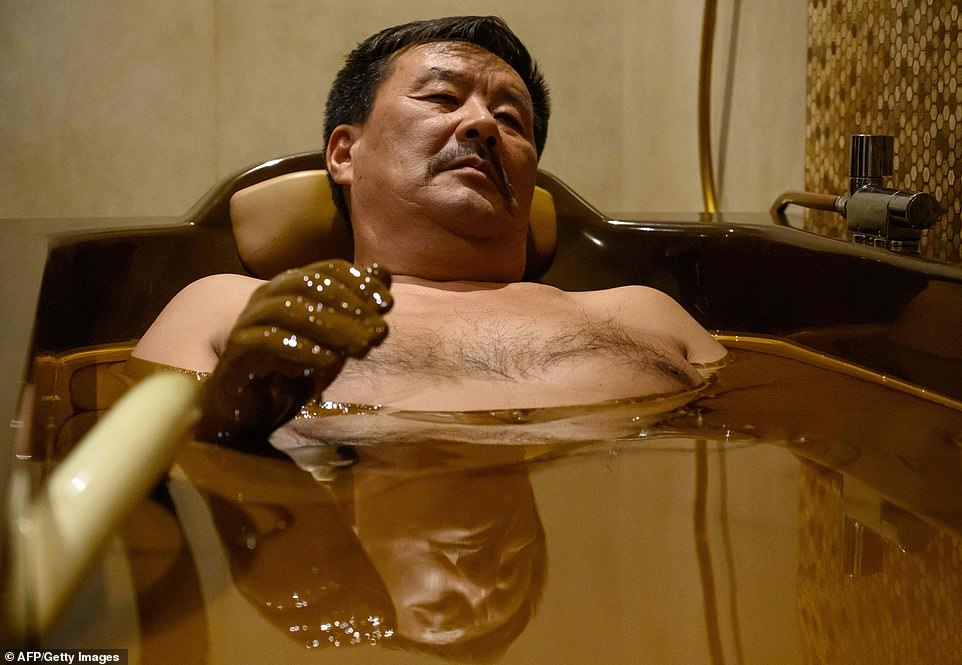 A man sits with his head against a cushion in the oil bath as he raises his hand out of the liquid. The country’s huge oil deposits were discovered in the 1800s 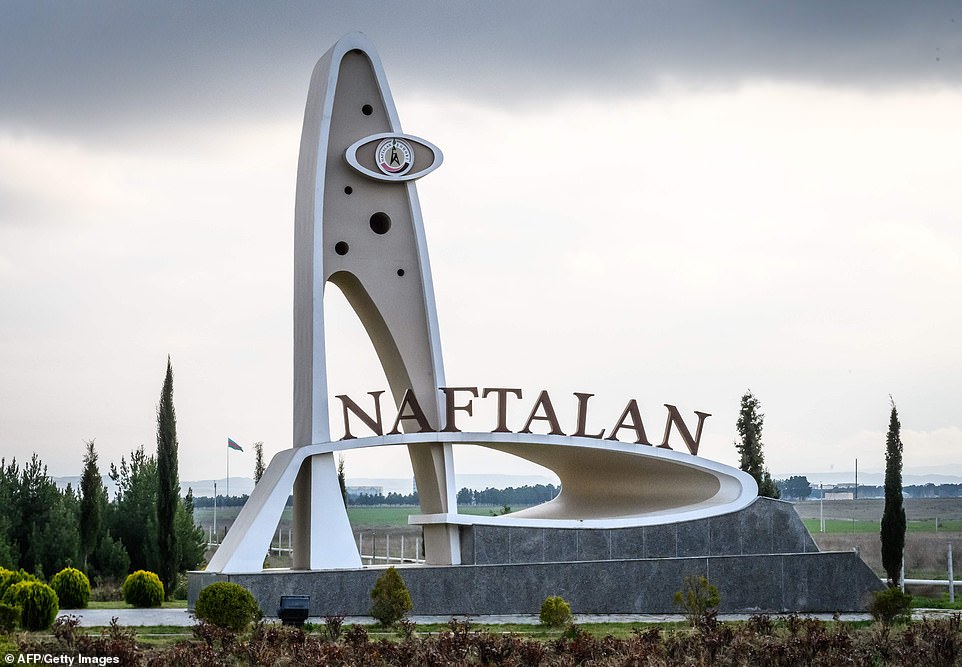 A monument stands at the entrance of the city of Naftalan – 186 miles from Azerbaijan’s capital Baku. The petroleum spa resort is popular among tourists despite being close to the conflict zone Nagorny Karabakh 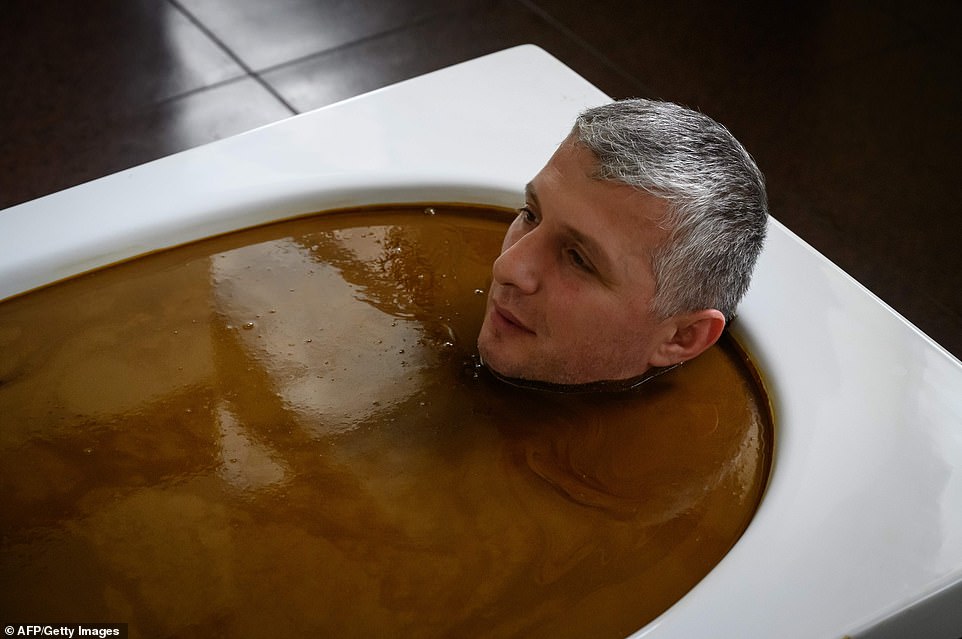 Oil exports to markets all over the world are the largest sector of Azerbaijan’s economy. It helped made the country one of the first places to start commercial oil production in the 19th century

The native of Russia’s Tatarstan region said she and her friends ‘have long dreamed of coming’ for treatment in Naftalan.

The petroleum spa resort in the oil-rich Caucasus country is a draw for visitors despite its proximity to Nagorny Karabakh, a region disputed between Azerbaijan and Armenia in a long-running armed conflict.

After 10 days of bathing in crude oil Sulfiya says she now feels ‘much better’ and has even reduced her medication for the polyarthritis that she has had for 12 years.

‘It is a gift from God,’ agrees 48-year-old Rufat, an Azerbaijani journalist and opposition party member who is undergoing treatment in the sanatorium called Sehirli, or ‘magic’ in Azerbaijani.

Azerbaijan’s vast oil deposits were discovered in the mid-19th century, making what was at the time part of the Russian Empire one of the first places in the world to start commercial oil production. 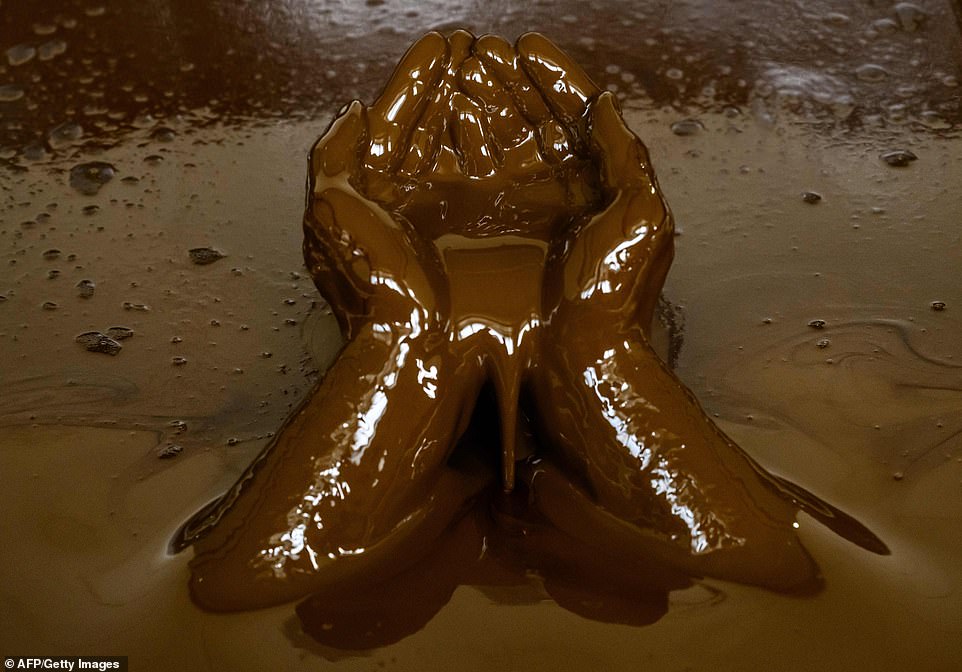 One Russia woman, known only as Sulfiya, who is in her 60s, said after 10 days in the oil baths she feels better and has been able to take less medicine for her polyarthritis that she has had for 12 years

Oil exports to markets all over the world are the largest sector of Azerbaijan’s economy, but the crude that comes from subsoil reservoirs in Naftalan is not suitable for commercial use.

Instead the local oil is used to treat muscular, skin and bone conditions as well as gynaecological and neurological problems.

According to a legend, which spa staff readily tell clients, the healing properties of Naftalan’s ‘miraculous oil’ were discovered by accident when a camel left to die near a pool of oil was cured.

The small town of Naftalan some 185 miles from the capital Baku became a popular health resort for Soviet citizens in the 1920s. 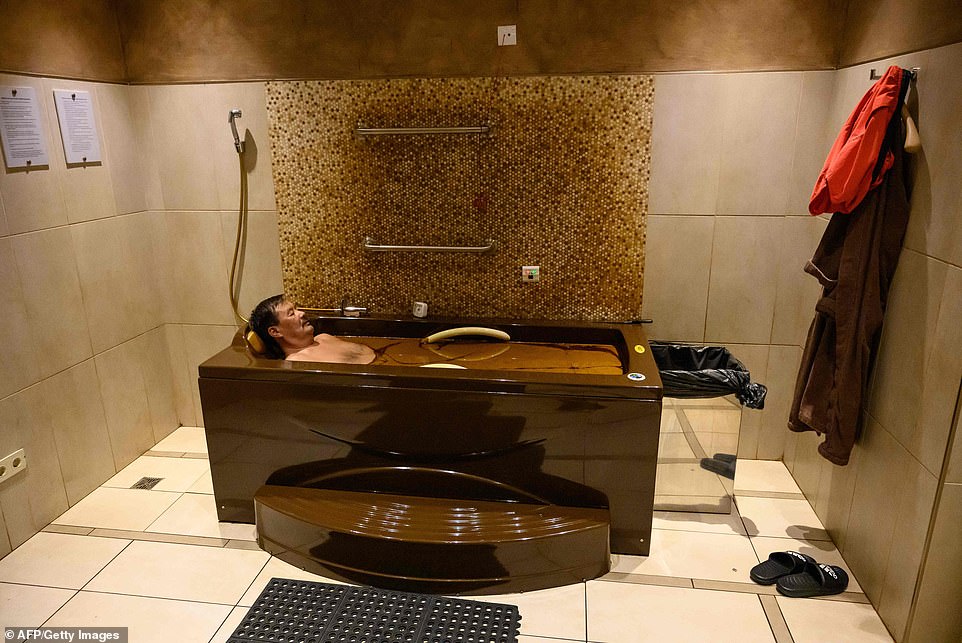 Spa staff regularly tell of the legend of the healing properties of Naftalan’s ‘miraculous oil’. They say the powers were discovered by accident when a camel left to die near a pool of oil was cured 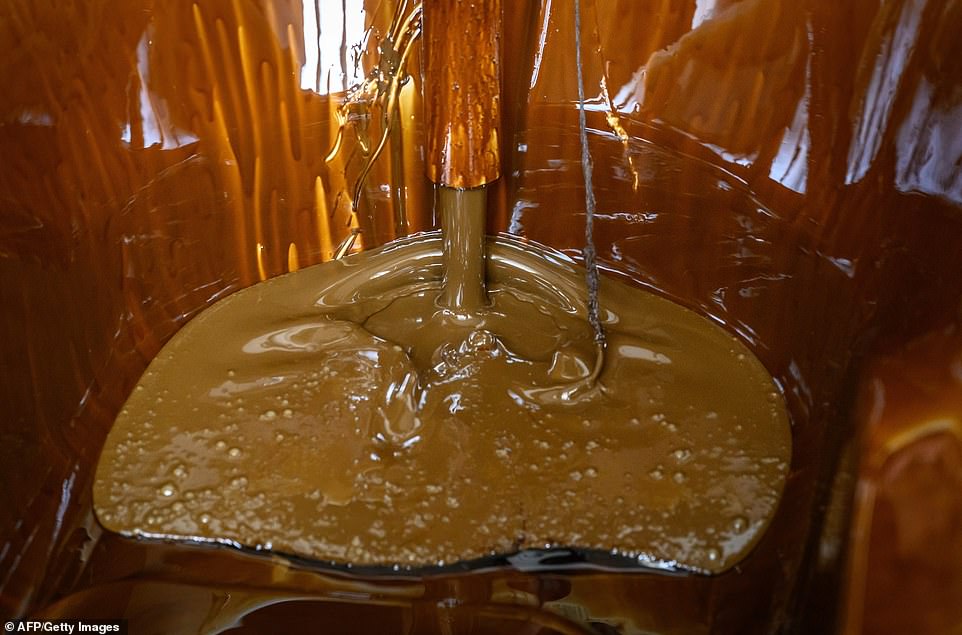 The thick, dirty oil runs from a tap into the large brown baths. Naftalan became a popular health resort for Soviet citizens in the 1920s 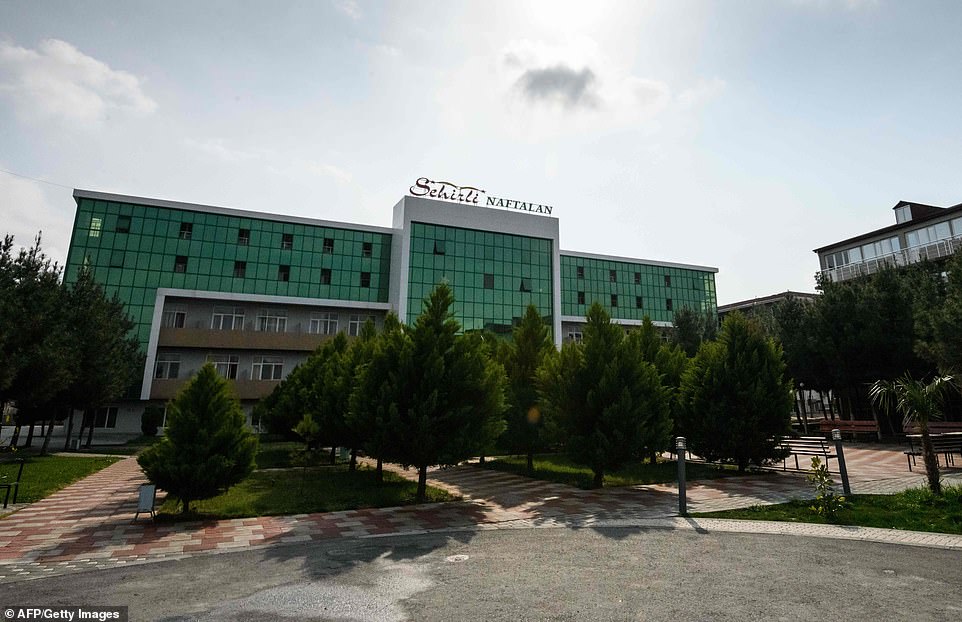 The facade of Sehirli Naftalan Health Centre, is pictured on March 21. Over the last two decades, Azerbaijani authorities have worked hard to re-establish Naftalan’s reputation as a health resort

‘In the past, when there weren’t any hotels or sanatoriums, people would come to Naftalan and stay with locals,’ said one of the doctors at the Sehirli sanatorium, Fabil Azizov, sitting in her office under a portrait of strongman President Ilham Aliyev.

‘But as time passed, sanatoriums were built and treatment methods developed.’

Some specialists warn the method has dangerous side effects.

‘Despite the stories of past cures, the use of crude oil for medicinal purposes has been condemned by Western doctors as potentially carcinogenic,’ former journalist Maryam Omidi wrote in a 2017 book published in Britain about Soviet-era sanatoriums.

In fact, the oil at Naftalan is almost 50 per cent naphthalene, a carcinogenic substance found in cigarette smoke and mothballs that in large amounts can damage or destroy red blood cells. 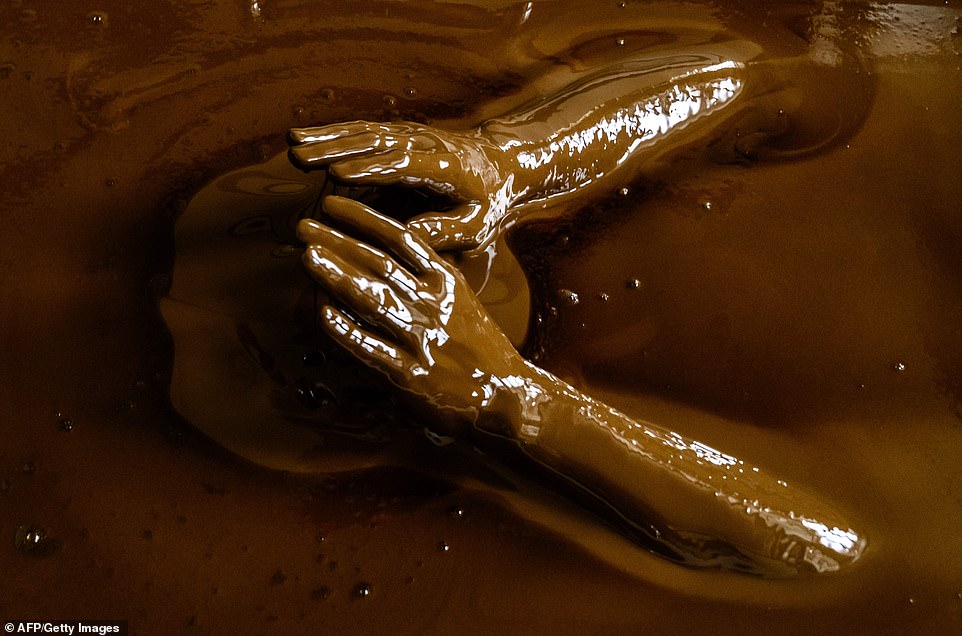 A man pushes oil away from his body in the bath as his hands emerge from the sludge-like substance. Doctors and patients brush aside misgivings over the treatment method 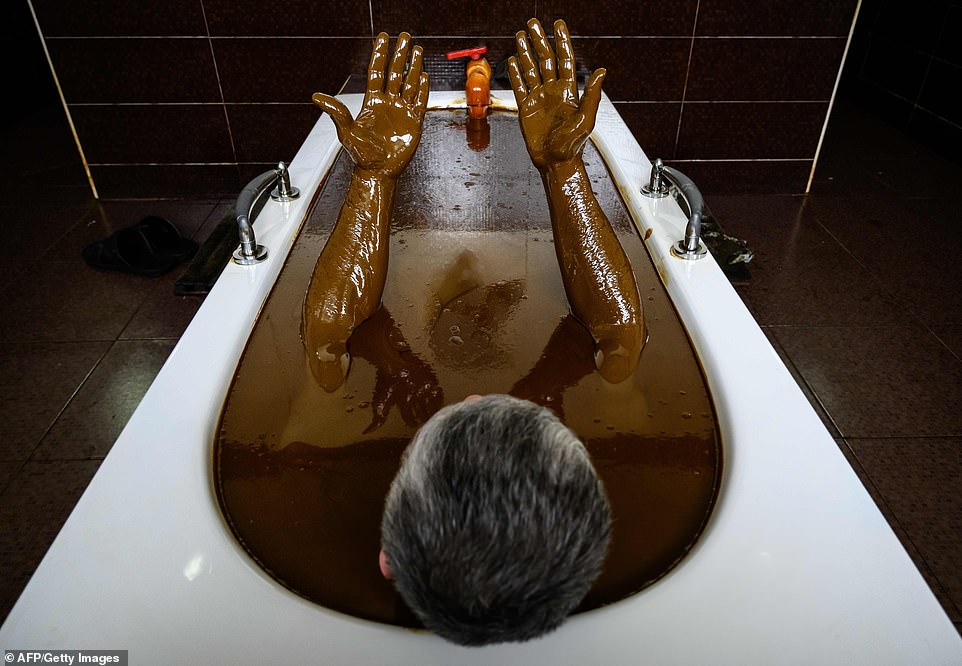 A grey-haired man holds up his hands in a white bath at the health centre. An orange tap that appears to be made from plastic sits at the top of the bath

But doctors and patients at Naftalan brush aside any misgivings and the sanatorium even has a small museum displaying crutches that once belonged to patients who have recovered from their illnesses.

But in 1988, a bloody war began with neighbouring Armenia for the control of Azerbaijan’s separatist Nagorny Karabakh region, which unilaterally proclaimed independence from Baku in 1991.

The conflict claimed the lives of some 30,000 people from both sides and forced hundreds of thousands to flee their homes.

A 1994 ceasefire agreement ended hostilities, but the arch foes have yet to reach a definitive peace deal and there are frequent skirmishes along the volatile frontline. 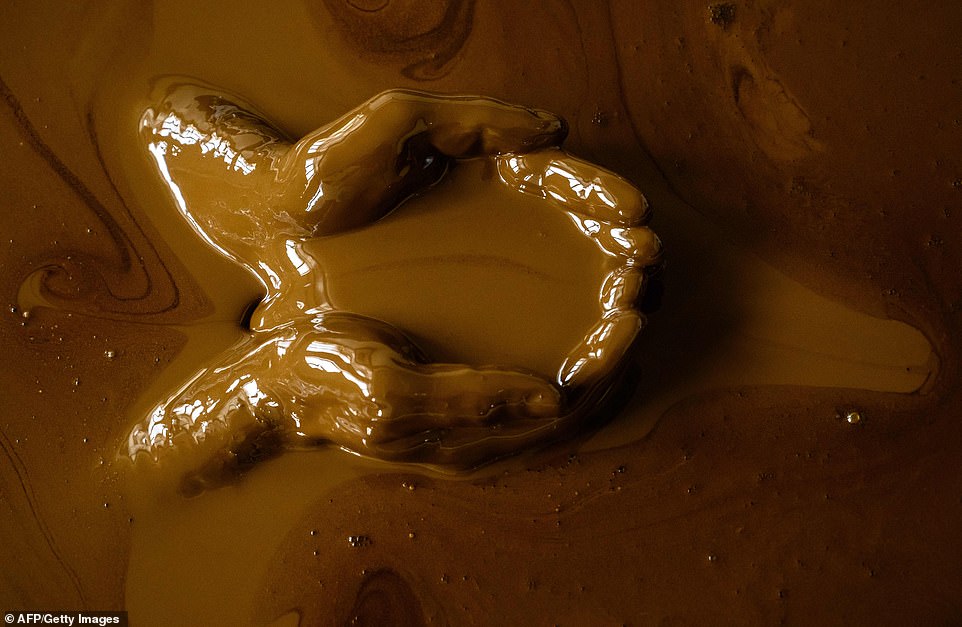 In the 1980s, Naftalan would host more than 70,000 visitors a year but has since lost tourists after a bloody war in 1988 ensued with Armenia 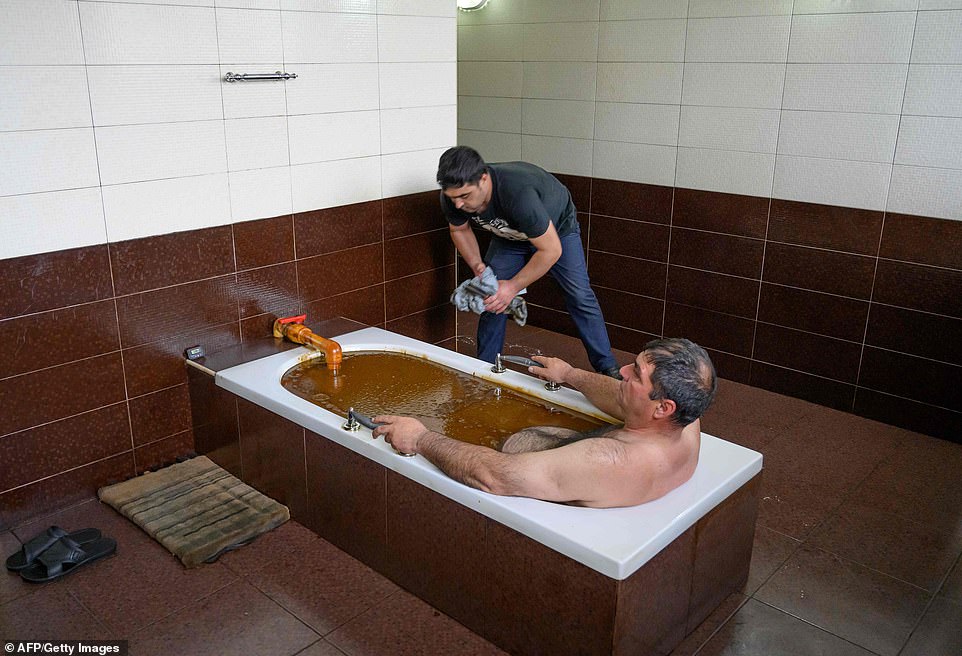 Visitors are treated to a dip in the oil, which is heated to just above body temperature, fro around ten minutes. After this an attendant scrapes the brown oil off her skin and sends them into a shower

During the war, the sanatoriums in Naftalan – a few kilometres from the frontline – were converted into hospitals for wounded soldiers and temporary accommodation for refugees.

Over the last two decades, the Azerbaijani authorities have worked hard to re-establish Naftalan’s reputation as a health resort.

The simmering Karabakh conflict may be out of sight, but guests can still feel uncomfortably close to the military action.

During one of the deadliest recent bouts of fighting in April 2016, ‘we heard gunshots,’ said a member of staff at Naftalan’s luxurious Garabag spa, adding quickly that ‘everyone stayed on.’