Away from the Algarve, out in the Atlantic, the archipelagos of the Azores and Madeira are big on nature and small on crowds. The summits of huge underwater islands, they offer very different experiences if you’re a fan of the great outdoors.

There is a rare wild beauty on the Azores, with black-sand beaches on dramatic basalt coastlines, but it’s cooler here with unpredictable weather. Some 600 miles south-east, the region of Madeira is much more developed but is still rugged, is hotter and sunnier, and its island of Porto Santo comes with a divine sandy beach.

These glorious destinations are expected to be given the green light by the Government this month for quarantine-free travel, and will make for wonderful holidays through the summer and into autumn. Here is a taster of some of the most mouth-watering and creative holidays on offer.

THE VOLCANIC AZORES ARE HOT STUFF FOR INTREPID EXPLORERS

Hotspots: The crater of Sete Cidades on the island of Sao Miguel is three miles in diameter and filled with blue and emerald-coloured waters

The stunning Lagoa das Furnas (Lake Fumas) on Sao Miguel, which is the largest island in the Azores

It feels as if you’re walking through the pages of a geography book on these nine farming isles which straddle the continental plates of North America, Africa and Eurasia. The geological hotspot is full of volcanic craters – some of which you can walk around inside – smoking fumaroles, bubbling hot springs, verdant valleys and cavernous grottos formed from solidified lava.

This is a land made for exploring, starting on the largest island of Sao Miguel with its beautiful lake-filled volcanic craters. Skirt the crater of Sete Cidades, three miles in diameter and filled with blue and emerald-coloured waters, and hike by the hydrangea-fringed Lagoa do Fogo (Lake of Fire).

At Furnas, dominated by two volcanic craters, refuel on cozido, a kind of casserole cooked in a volcanic steam chamber – pick the one you want by watching the cooks lift the lids, before following them back to the restaurant.

Of the many walking trips on offer, Regent Travel has one of the best, combining the geographical highlights of Sao Miguel with the lesser-known island of Santa Maria, where you can take in its highest peak and visit an area of brightly coloured terrain known as the red desert. 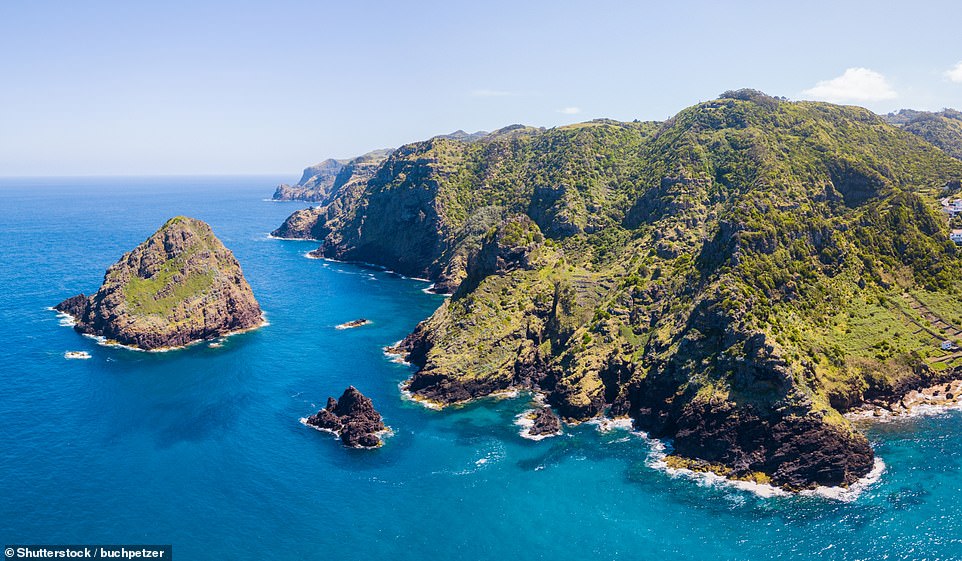 The Azores’ lesser-known island of Santa Maria, which you can visit on many of the walking trips on offer

Everything is at your own pace. Guests are given a walking itinerary and are dropped off and picked up each day.

If you prefer to walk as part of a guided group, HF Holidays has a 14-night holiday in September taking in five of the islands. It includes a full-day tour with a local geologist on Sao Miguel, and visits Faial, known as the blue isle; Sao Jorge, with walks along small coastal plains created by cliffside erosion; lilac-filled Terceira; and Pico, which has the highest peak in Portugal at 7,713ft.

It costs from £2,899pp for 14 nights’ half-board, with flights, internal travel and tips included (hfholidays.co.uk). 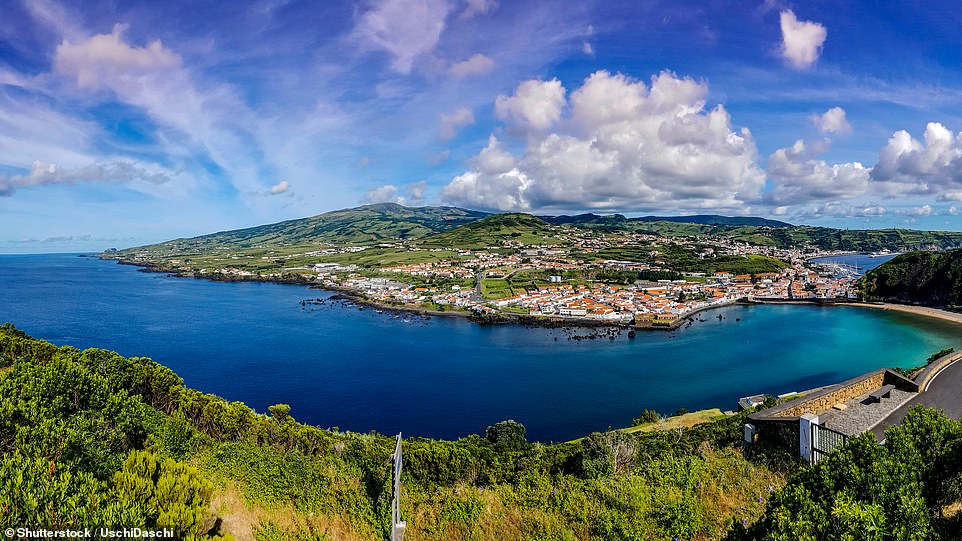 On a 14-night walking holiday with HF Holidays, you can take in five of the Azores islands, including Faial, pictured, known as the blue isle

Pico merits a stay in its own right, particularly if you want to attempt the day-long mountain climb. Base yourself at Lava Homes, a collection of 14 cottages on the island’s north coast, with a shared pool, yoga classes and walking trails from the door. If you’re not up to taking on the mountain, check out the huge stalactites and stalagmites at its base instead, in the three-mile Gruta das Torres lava tunnel.

Either way, you will have earned a glass or two of Pico wine, which has been produced here since the 15th Century on tiny vineyard plots separated by a network of low, protective dry-stone walls.

Learn all about it at the wine museum near Madalena, where you can see the ruts left by the wheels of grape-laden ox carts on the black lava ground. 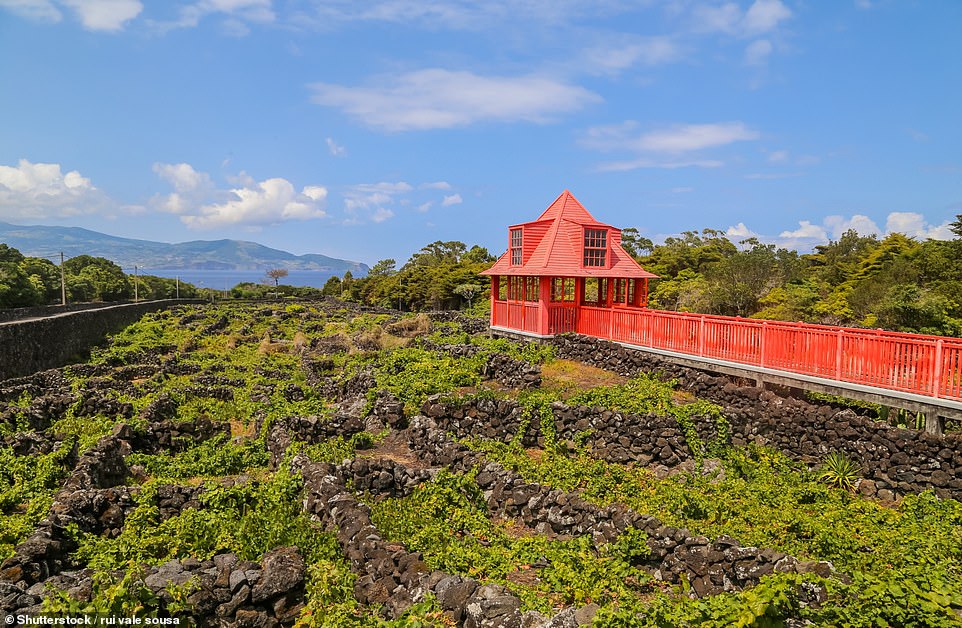 Pico’s wine museum, where you can see the ruts left by the wheels of grape-laden ox carts on the black lava ground

Alternatively try a self-guided cycling tour of the island, taking in Pico’s dramatic coastline from the saddle and stopping off to taste wine en route, as well as some of the gastronomic highlights, including stewed octopus with wine, fish soup and Pico cheese. Expect to cycle up to 19 miles a day with some (not too steep) hills, while your luggage is transferred ahead.

The trip, which costs from £1,056pp for a week’s B&B with flights and bike hire, also includes a whale and dolphin-watching excursion (azoreschoice.com). 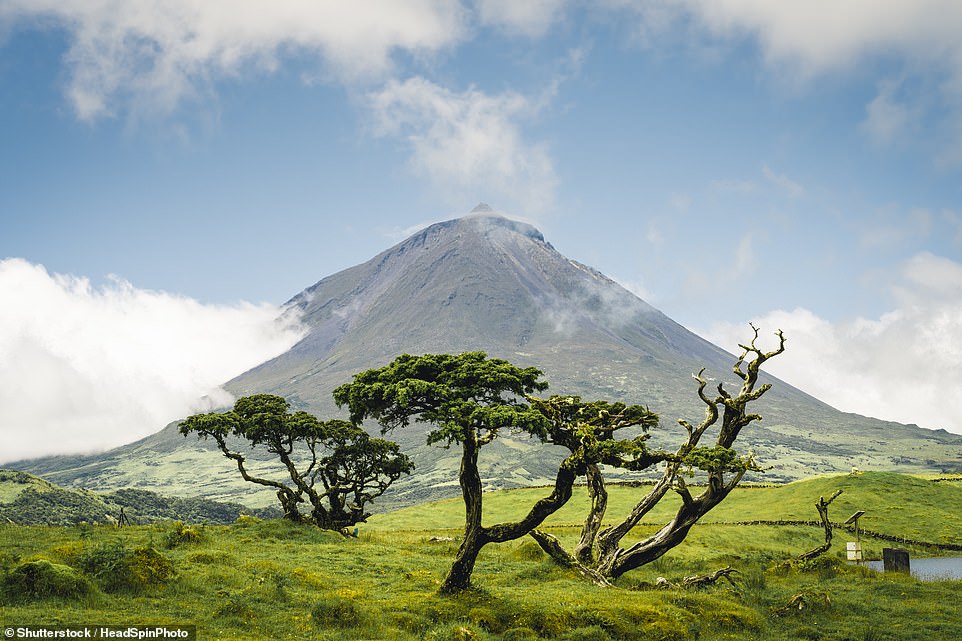 Mount Pico, pictured, on the Azores island of Pico, is the highest peak in Portugal at 7,713ft

For a more relaxing way to appreciate the volcanic surrounds, check in to Furnas Boutique Hotel on Sao Miguel for a spa stay, where the natural thermal water comes out of the ground at 40C (104F) and is used in both its indoor and outdoor pools. Enjoy a massage with volcanic stones and a body exfoliation with ingredients from the island, including Gorreana green tea – the plantation is just a short drive from the hotel.

STAY: Rooms in summer cost about £200 a night (furnasboutiquehotel.com).

While there is plenty to offer landlubbers, the Azores is just as interesting out at sea, where 20 types of whales and dolphins – a third of the total number of species – either live permanently or migrate through, including blue whales and humpbacks. 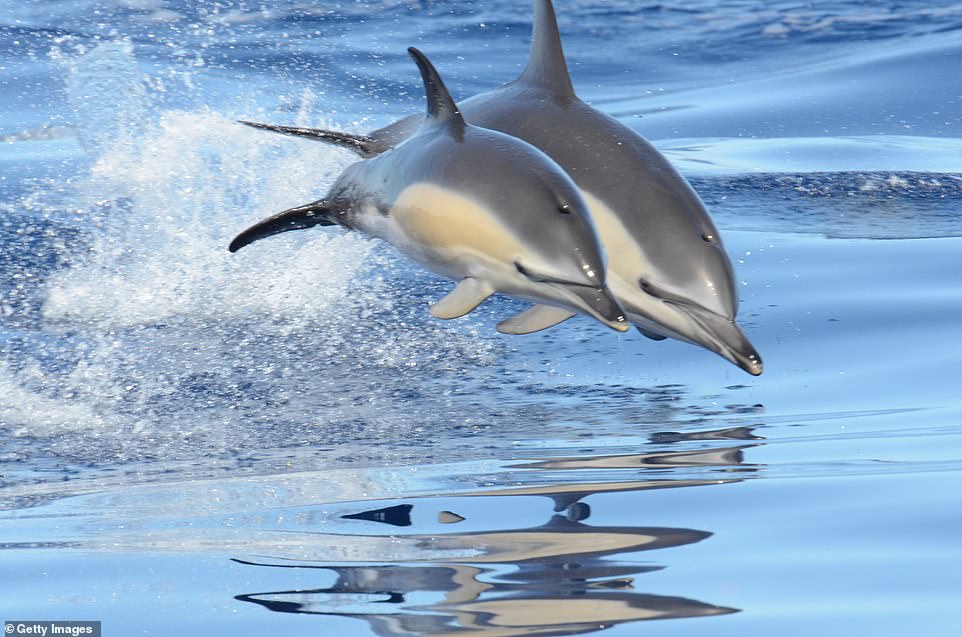 The Azores is one of the best places to spot dolphins and whales, including blue whales and humpbacks

Most packages incorporate a whale-watching excursion, but Wildlife Worldwide runs a whole holiday dedicated to studying sperm whales. During the summer, when they visit in numbers, you can join experts helping a team of researchers. Spend your days photographing and recording whales and dolphins with cetacean biologist Dr Lisa Steiner, and your nights in the comfort of a four-star hotel across from the marina in Horta, capital of Faial.

STAY: Six nights’ B&B, with flights and all meals during three days at sea, costs from £1,525pp (wildlifeworldwide.com).

Join dolphins in the water on a holiday that includes three half-day boat outings accompanied by a marine biologist. Although eight passengers are carried on board, only two are allowed in the water with the dolphins at any one time. 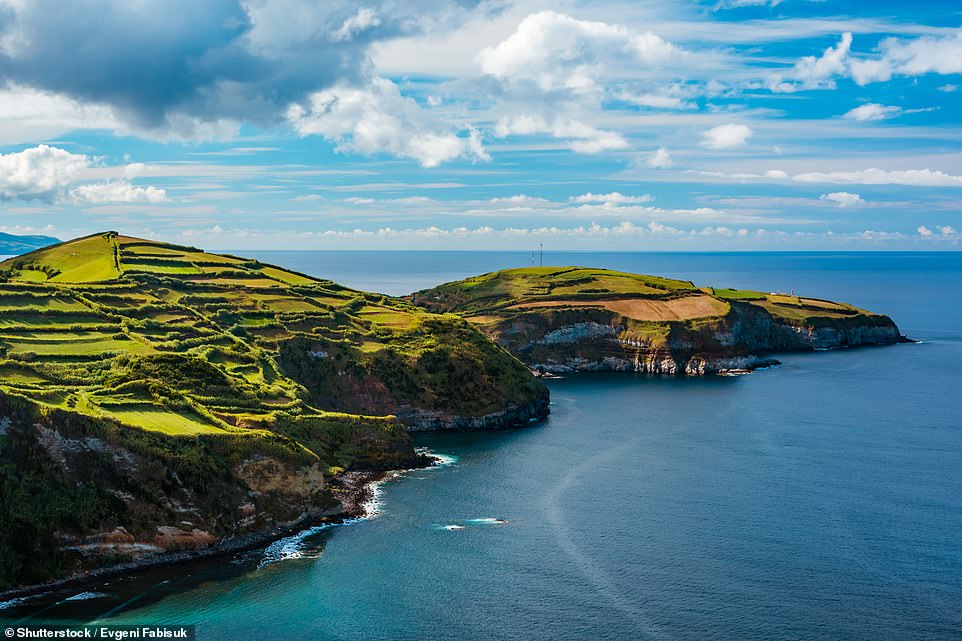 Off the coast of Sao Miguel, pictured, you can go diving and see the largely intact wreck of the SS Dori, which sank in 1964

With time to see island highlights too, it costs from £755pp for a week’s B&B, excluding flights (responsibletravel.com).

There’s more to be seen beneath the waves on a diving holiday that takes in some seriously big fish as well as a wreck and amazing rock formations.

Off Sao Miguel, dive down 70ft to the largely intact wreck of SS Dori, which was involved in the D-Day Normandy landings but sank in 1964 and is now surrounded by shoals of fish.

WHY EVERYTHING’S BLOOMING ON MADEIRA, THE ‘FLOATING GARDEN’

Madeira has spectacular scenery that is best seen by walking some of the 1,864-mile network of levadas – channels carved into the landscape to distribute water from the top of the slopes to the valleys.

Thanks to these waterways, a riot of exotic flowering plants has grown up, giving the island its nickname of ‘floating garden’.

You can walk along them at your own pace on a self-guided holiday in the eastern part of Madeira, with options to take routes of different lengths. You’ll be able to follow the levadas up and down mountain ridges and into tunnels, stop for a dip in a waterfall pool and see one of the island’s last remaining sugar refineries. There’s time to explore the capital of Funchal and to taste its famous fortified wine. Luggage is transferred while you walk between four hotels. 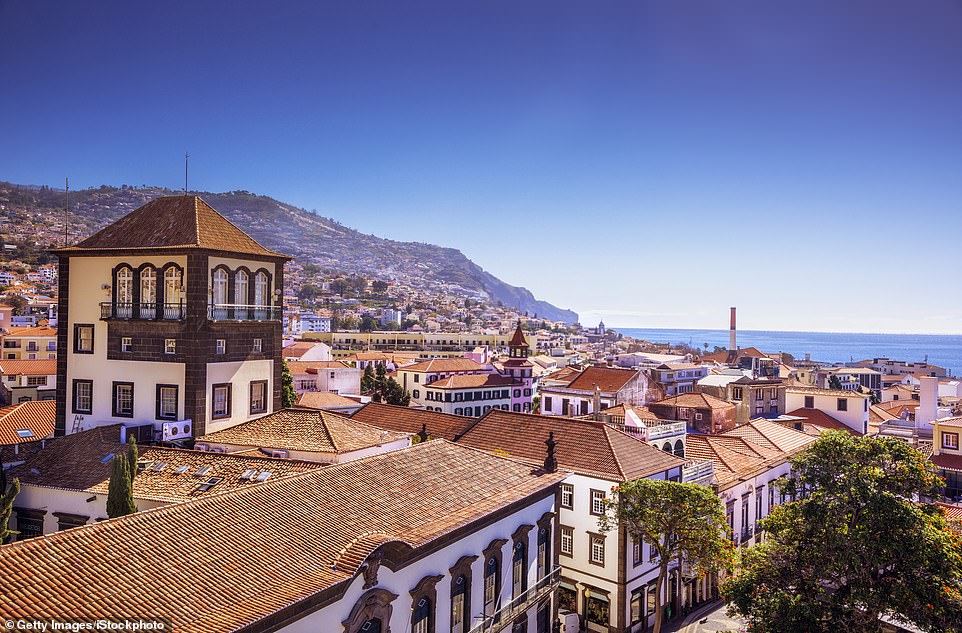 Madeira has spectacular scenery that is best explored on foot. Pictured is Funchal, the capital of Madeira

For a guided walking trip, G Adventures has small-group tours that explore a different terrain each day. Climb the jagged mountain staircase high above the cloud line to Pico do Arieiro, one of the island’s tallest peaks, and brave the glass skywalk extending across the cliffs at Cabo Girao.

STAY: Five nights’ B&B in June and September costs from £749pp in groups of up to 16 people, which includes three lunches but not flights (gadventures.com). 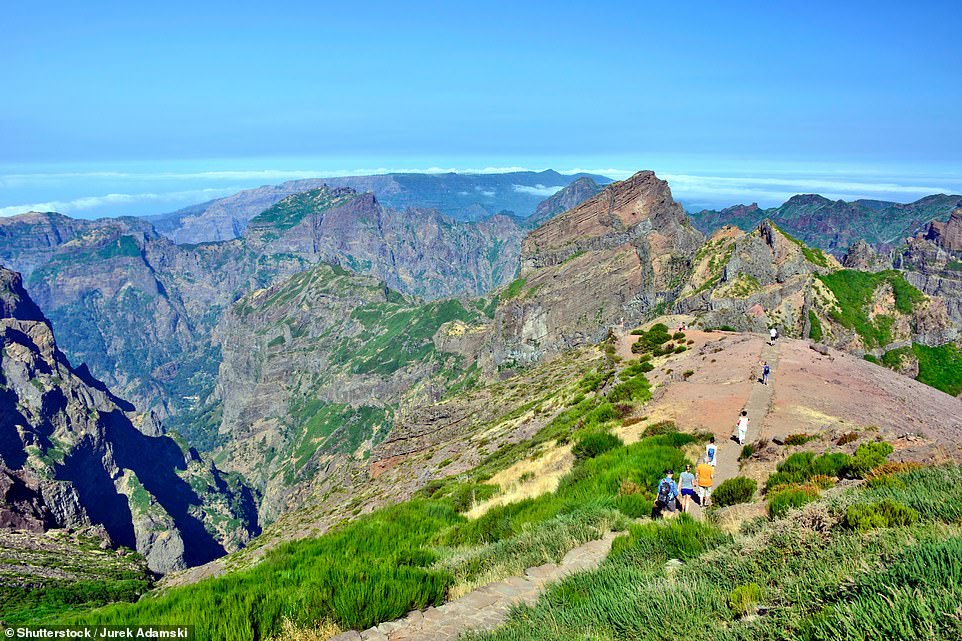 Visitors to Madeira can climb the jagged mountain staircase high above the cloud line to Pico do Arieiro, pictured, one of the island’s tallest peaks 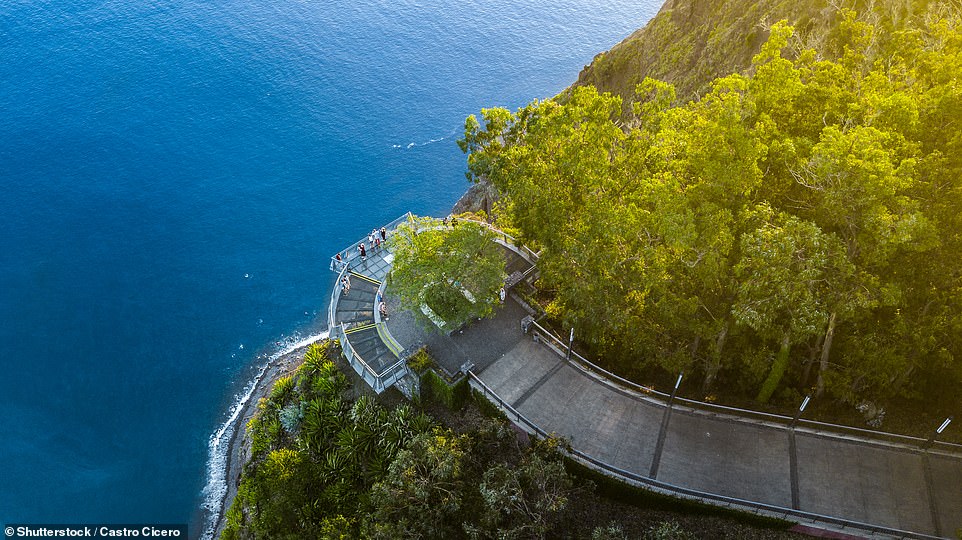 Would you be brave enough to venture on to the glass skywalk, pictured, that extends across the cliffs at Cabo Girao?

If a luxury hotel is more your thing, look no further than Reid’s Palace, a sugar-pink clifftop eyrie whose long list of famous guests includes Sir Winston Churchill. It’s a gentle kind of place for afternoon teas and dips in the pools.

Take a boat trip to the uninhabited Desertas Islands and explore their caverns and grottos before returning to dine in the Michelin-starred restaurant. The hotel organises tours of its impressive subtropical gardens with a horticultural expert.

There are more gardens to see at the Palheiro Nature Estate, famed not only for the variety of plants, which include jacaranda and hibiscus almost year-round, but also for the beauty of the hillside setting. 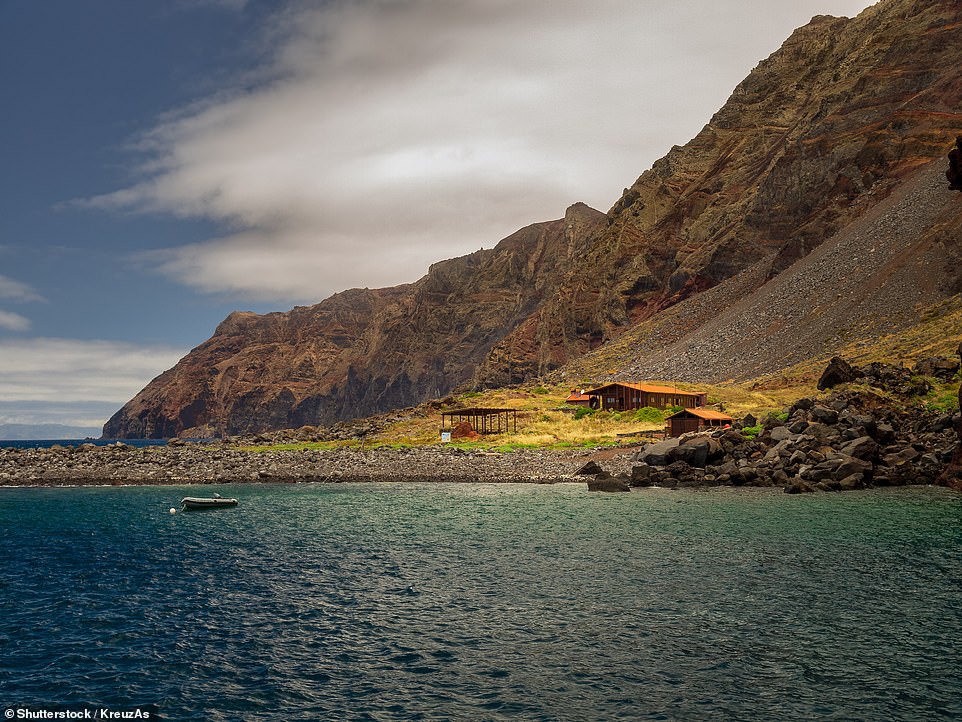 The uninhabited Desertas Islands, pictured, where visitors can explore caverns and grottos

Stay at the Casa Velha Do Palheiro, which has hiking and biking trails through the 300-acre estate. Play golf on the 18-hole course which, at 1,640ft above sea level, has dramatic Atlantic and mountain views.

There’s croquet, tennis and a spa back at the hotel – part of the Relais & Chateaux group – with its 38 elegant rooms bedecked in floral fabrics. A week’s B&B between June 23 and July 31 costs from £799pp with flights if booked by May 11 (ba.com).

Smaller but just as lovely is the botanical oasis created at Quinta da Casa Branca, which was first used to grow banana trees and vines. Owned by the Leacock family, it was once one of Madeira’s largest wine producers, trading with England from the mid-18th Century until 1925. 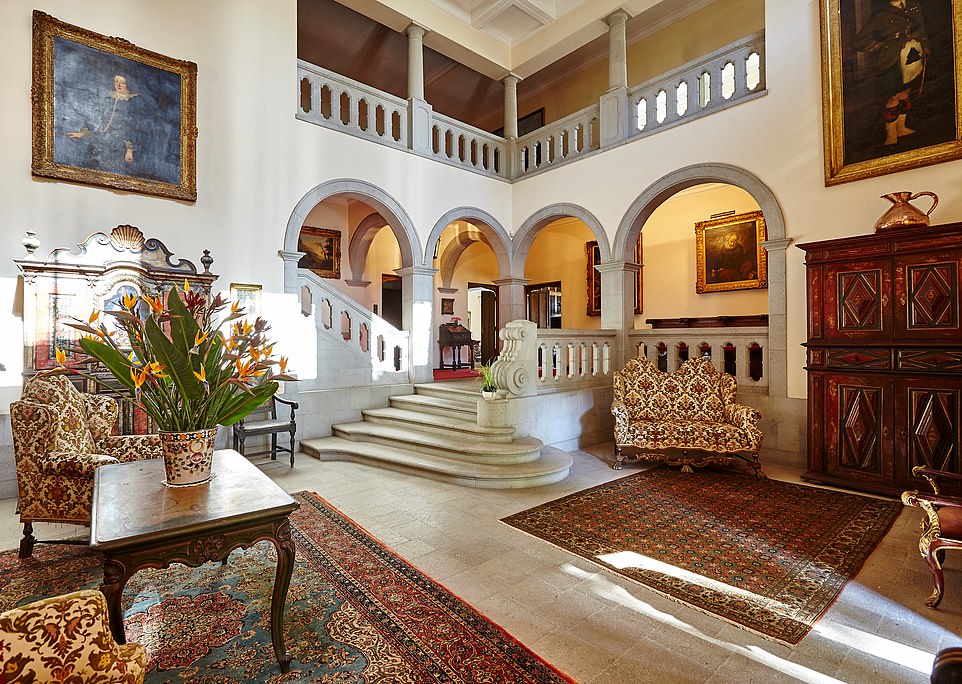 Oasis: Inside Quinta da Casa Branca, where light spacious rooms open directly on to the garden

Now you can take in the hotel’s giant Indian rubber trees and the African tulip trees, the iconic bird of paradise plant and whole carpets of pink, yellow and purple flowers.

STAY: A week’s B&B with flights costs from £990 (elegantresorts.co.uk).

If you are looking for a glorious beach, the place to go is Porto Santo – it has five-and-a-half miles of sand running down one side of the island.

The island of Porto Santo, pictured, has five-and-a-half miles of sand running down one side of it

There’s an added bonus: the sand is said to have therapeutic qualities that can help cure various ailments.

From the low-slung Pestana hotel, you can walk to the sleepy town of Vila Baleira, the location of Christopher Columbus’s former house (it is now a museum). At the other end of the beach, stop in at O Calhetas to try the local speciality of scabbard fish in passion fruit sauce topped with banana.

STAY: Seven nights at the all-inclusive Hotel Pestana Porto Santo is from £692pp, with Gatwick flights in June (tui.co.uk).