Babes in the Wood killer Russell Bishop has been jailed for life and will serve at least 36 years for the infamous murders.

The sentence means the 52-year-old – who refused to attend court today – will be 88 before he can apply for parole.

But he was only convicted yesterday – 31 years to the day after he was previously cleared of the killings – ending the victims’ families’ long fight for justice.

Bishop has been in prison since 1990, when he was jailed for sexually assaulting and trying to kill another young girl.

Handing him his latest life term today, Mr Justice Sweeney said: ‘I have no doubt that you were a predatory paedophile. The terror that each girl must have suffered in their final moments is unimaginable.’

Bishop was previously cleared of the Babes in the Wood murders in 1987, but within three years he went on to kidnap, molest and throttle the seven-year-old girl, leaving her for dead at Devil’s Dyke.

While serving life for that crime, Bishop was ordered to face a fresh trial for Nicola and Karen’s murders in light of a DNA breakthrough. 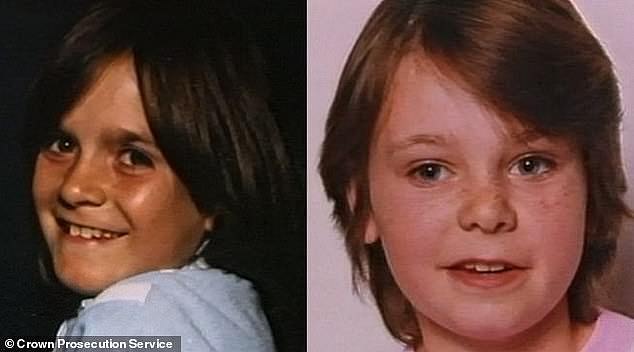 Nicola Fellows (left) and Karen Hadaway (right) were found dead in woodland near Brighton in 1986. The case went unsolved for more than 30 years 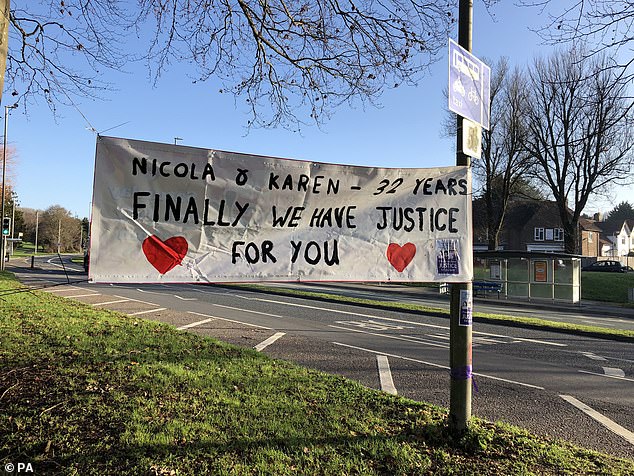 Susan Eismann, formerly Fellows, said: ‘On 9 October 1986 my beautiful little girl Nicki was taken from me and from that day my world was turned upside down.

‘No parent ever thinks this would happen to their children but sadly for me, it did.

‘In 1987 Russell Bishop went on trial for the murder of both Nicki and her little friend Karen.

‘After giving my evidence at the start of that trial I couldn’t face going anymore and therefore stayed away, just receiving updates from the family liaison officer.

‘I will remember forever the day she called me to tell me he had been found not guilty.

‘I could not believe the outcome because I have always known that he killed my Nicki.

‘I have lived with the pain, the loss and sheer hate towards him for what he has done for the last 32 years.’ 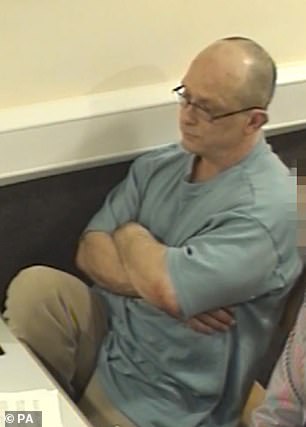 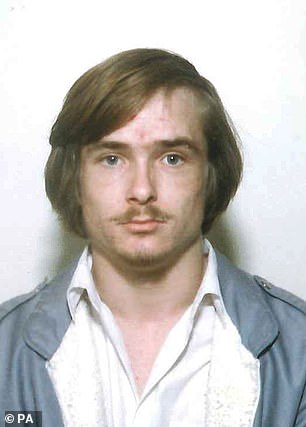 He sat with his arms arrogantly folded during questioning and told police he’d take them ’round and round in circles’ like he did 30 years ago. He is pictured, right, after his initial arrest in 1986 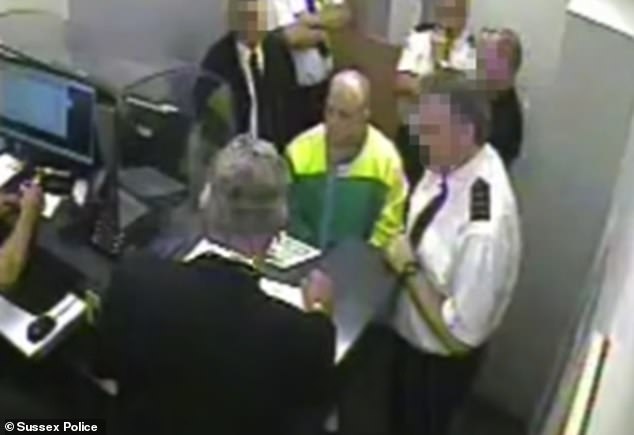 Bishop, centre, was rearrested two years ago and questioned over the 1986 murders

Sussex Police informed her the case had been reviewed in 2013 in light of further evidence in line with scientific advances.

In 2017 Bishop’s acquittals were quashed paving the way for a second trial, ending five long anxious years for the families.

‘Those years were a huge worry, Mrs Eismann continued. ‘They opened up a lot of old wounds and I was forced to think about everything all over again.’

The judge said: ‘Russell Bishop, yesterday, 31 years ago to the day after your acquittals for the same offences you were convicted of on now overwhelming evidence of the murders of Nicola Fellows and Karen Hadaway, both aged nine in Wild Park in Brighton on 9 October 1986.

‘I have no doubt that you were a predatory paedophile that, having seen Nicola and Karen playing near the entrance to the park at around 5.15pm you remained in the area in case a chance arose to lure them through the woods in the park.

‘That that chance did arise at around 6.30pm when you saw them not far from you outside the southern end of the park.

‘That, taking advantage of your previous dealings with their families and with them and your local knowledge you then lured them to a secluded den in the woods.

‘That there, entirely for your own pleasure, you subdued them, punching Nicola in the face and putting your hand over her nose and mouth in the process, and that then, in turn, you strangled and sexually assaulted each of them and that the worst of the sexual assaults was inflicted on Nicola – including part of it after her death – because earlier that afternoon she had been rude to your then 16-year0old girlfriend.

‘The terror that each girl must have suffered in their final moments is unimaginable.’

Of the current trial, Nicola’s mother Mrs Eismann said: ‘I have had to listed to the most dreadful detail of what happened to her.

‘To think that someone could and did do that to her is beyond belief.

‘I always knew she had been physically hurt, sexually harmed and would have been absolutely terrified but over the years I have stopped myself from thinking of that as it would have absolutely tortured me.’

Bishop faced a second trial after a Pinto sweatshirt discarded on Bishop’s route home was linked to the defendant by DNA, while fibre, paint and ivy transfers placed it at the scene.

Tests on a sample from Karen’s left forearm also revealed a ‘one in a billion’ DNA match to Bishop.

He tailored his evidence to counter the new forensic evidence, claiming to have touched the bodies to feel for a pulse after they were found by two 18-year-olds.

But jurors took just two and a half hours to see through the web of lies and convict Bishop on the ‘overwhelming’ evidence on the 31st anniversary of his acquittal.

Members of the girls’ families wept and hugged each other after the verdict.

Barrie Fellows said the loss of Nicola destroyed his relationship with his wife, saying it ‘tore us apart’.

On the false accusations he has faced over the murders, he said: ‘Thirty-two years is a long time to be suspected of murdering your daughter. When they arrested and charged Russell Bishop I thought that would be the end and we would get some closure. It did not pan out like that.

‘Since the trial began I have been through every feeling imaginable from hope to sheer dread.

‘Words cannot describe how I feel about Russell Bishop and the effect it has had on people’s lives.’ 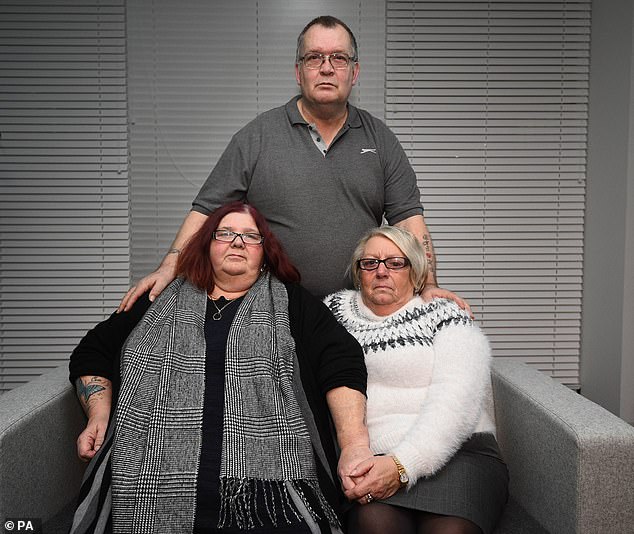 Michelle Hadaway, the mother of Karen Hadaway, (left) with Barrie Fellows and Sue Eismann the parents of Nicola Fellows. Victim impact statements from the parents were read today

‘Unless you have lost a child you cannot imagine the heartbreak,’ Mr Fellows added.

‘It’s like your heart has been ripped from your chest, over and over again, day in day out.

‘To then be accused of being involved in the loss and harm of that child is emotionally and psychologically damaging.

‘For the past 31 years I have lived with the constant paranoia and dread of what everyone thinks of me, even those close to me.

‘To look up Russell Bishop’s name of Google and see my face as the first picture to come up, with headlines such as ‘Father watched sex tape’ has caused me many sleepless nights, not just for me but my whole family.

‘Being accused by him has affected the way I interact with both my children and grandchildren.

‘I feel people may see normal things such as a hug or a kiss as me doing something inappropriate.’

A former forensic investigator who failed to recognise the significance of a key item of clothing linking suspect Russell Bishop to the murder of two schoolgirls has told for the first time how he had always believed the sex fiend was responsible.

Edward Redman, an ex scenes of crime officer who gave evidence at Bishop’s first trial in 1987 into the double murders of Nicola Fellows and Karen Hadaway, blamed the British public and jury system for allowing him to evade justice for 31 years.

He spoke out after the killer was finally nailed yesterday at his retrial for the notorious two crimes. 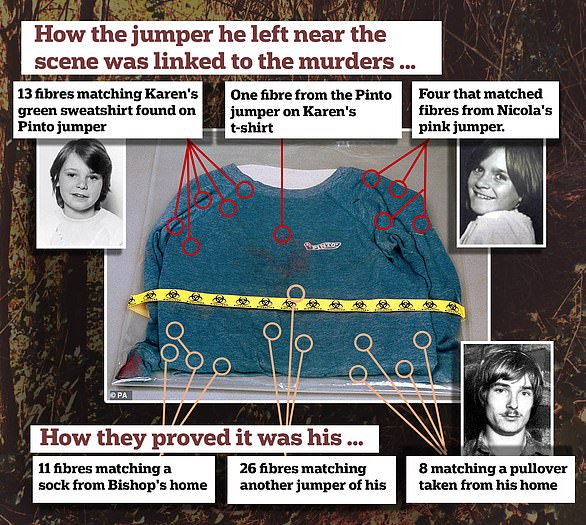 In the latest trial, forensic experts used the latest techniques to link a jumper found not far from the girls’ bodies to Bishop and the killings

The civilian police force worker, who wasn’t called to give evidence for the prosecution a second time, said: ‘It was the fault of the British public – the jury – for allowing the killer to evade justice and walk free.

‘The verdict was based on what the British public thought. The verdict did not reflect the evidence given. He should have been found guilty.’

The bungled first trial had been branded ‘a shambles’ by one of the lawyers involved.

A key part of evidence brought against Bishop in both trials centred on a blue Pinto sweatshirt that prosecutors say he wore then later discarded as he walked home from killing the two girls in Brighton’s Wild Park on October 9 1986. 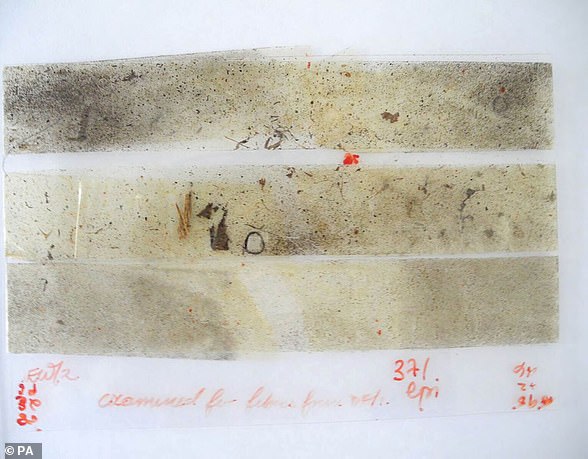 Mr Redman, who had helped gather evidence for murder squad detectives, declined to comment on accusations he could have been at fault, simply saying: ‘I’ve done my bit. I did my job to the best of my ability.’

The retired SOCO, speaking from his home in South Leicestershire before the verdict, added: ‘I couldn’t care a less about him. I’m just not interested. I’m coming to the end of my life now.

‘But he should have been found guilty first time round, he really should have.’