Rarely-captured scenes show a pack of painted wolves – the same African wild dogs set to be featured on David Attenborough’s Dynasties this weekend – hunting baboons, for the first time.

The photographs show how the animals, Africa’s most efficient predator, have changed their diet and begun to hunt the primates – something never witnessed by experts.

Wildlife photographer Nicholas Dyer took the pictures in the remote Mana Pools of Zimbabwe, where he has been following the animals on foot for the last six years.

His images show two packs hunting baboons on the banks of the Zambezi river, reaching speeds of 44mph to bring down their prey. 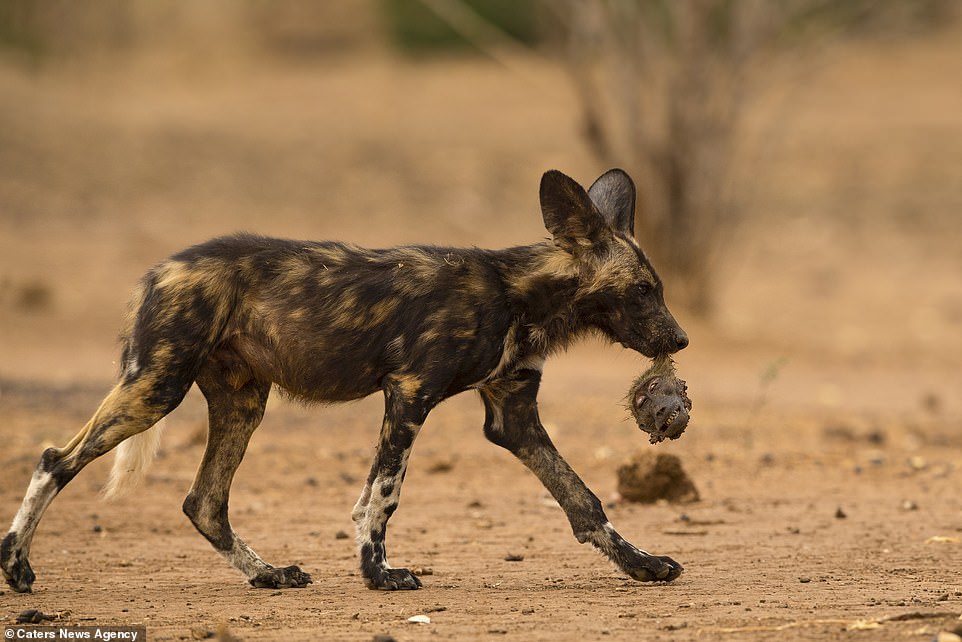 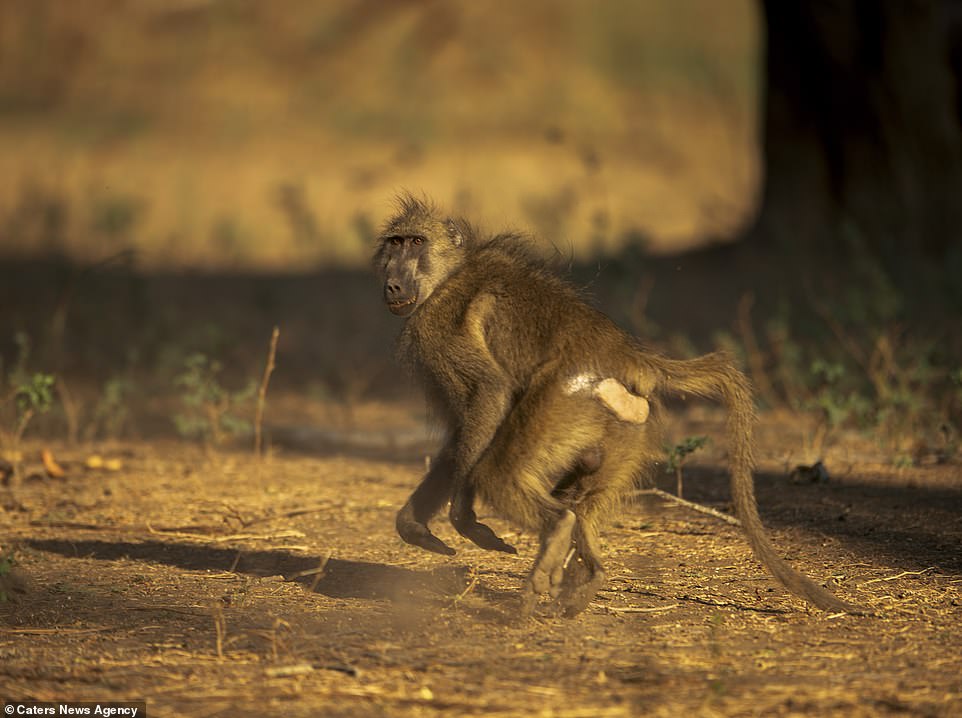 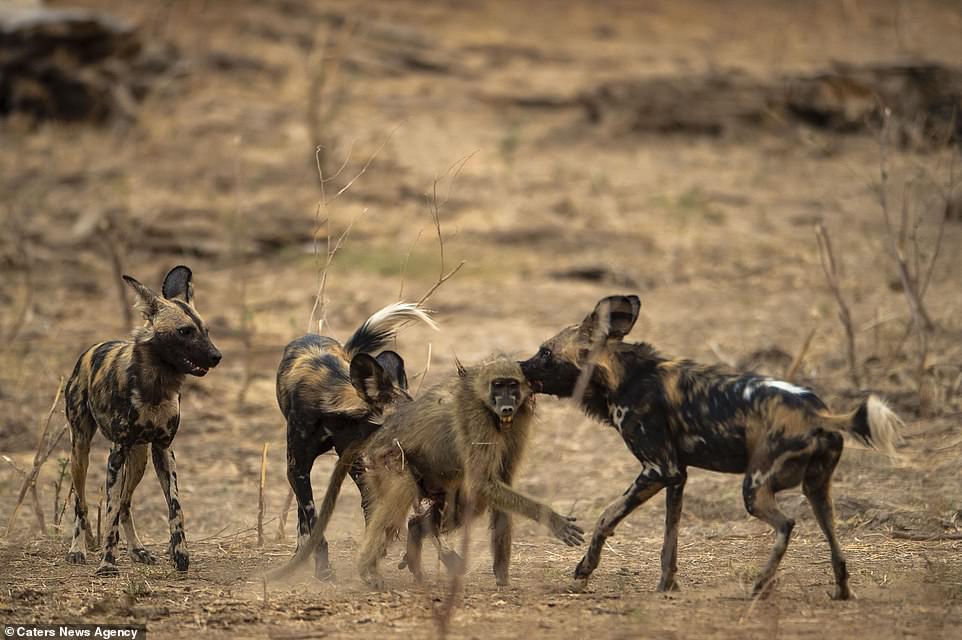 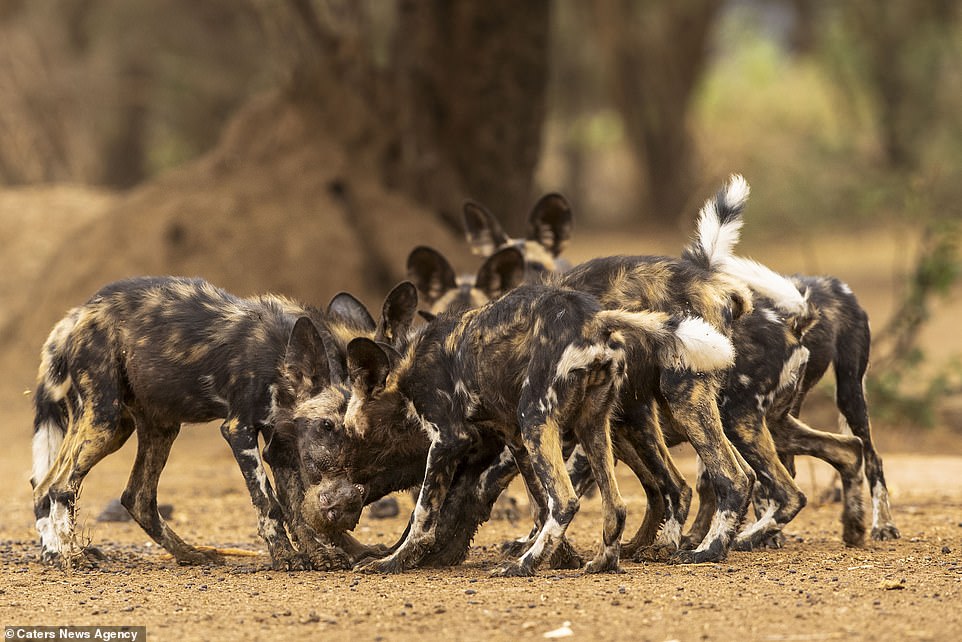 According to the scientific community the painted wolves are eating a baboon after changing their diets, something never before witnessed by experts

Nicholas, 55, who was born and raised in Kenya, commenting on the pictures said: ‘The first time I saw them hunt baboons I found it hard to believe.

‘Normally they only hunt antelopes, like impala and kudu.

‘But to add baboon to the list is unreported in the scientific community and has been seen by very few.’

Viewers will get a chance to see more of the unusual behaviour in the latest episode of BBC’s Dynasties, narrated by David Attenborough, which airs this Sunday.

The first painted wolves to get a taste for baboon – led by pack leader Blacktip – were captured in filming by the BBC and were one of the packs Nicholas was also following to photograph.

He added: ‘One of my photographs shows two of Blacktip’s puppies playing with the head of a baboon just a few metres in front of me.

‘Some people find it disturbing to see painted wolves eat our fellow primates.

‘But it is actually nature rebalancing itself.

‘The baboon population was exploding in the area and they were destroying birdlife and damaging the local ecosystem.

‘And while the pictures look really macabre, the puppies are just having lots of fun like your dog does when it runs around with a soft toy.’ 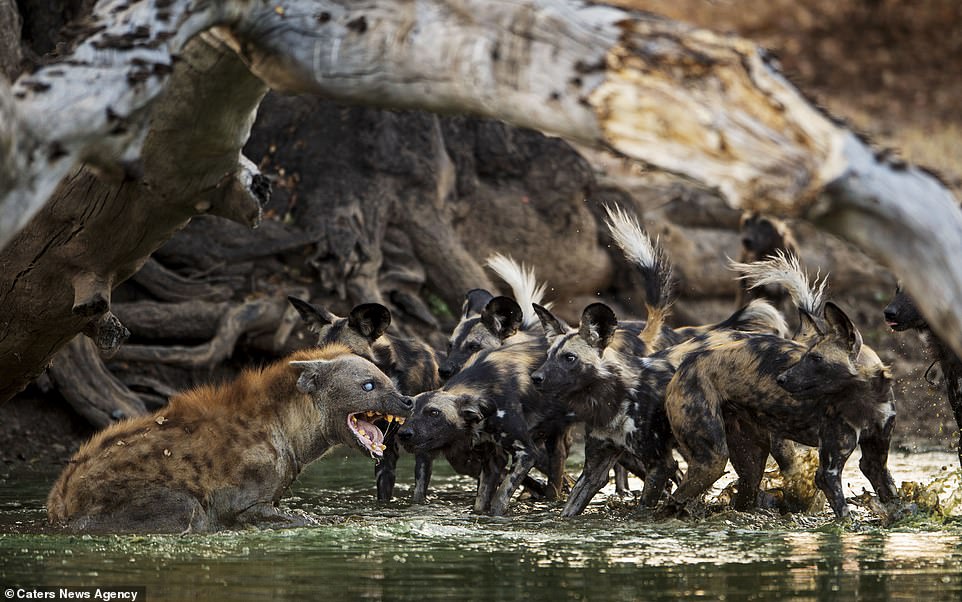 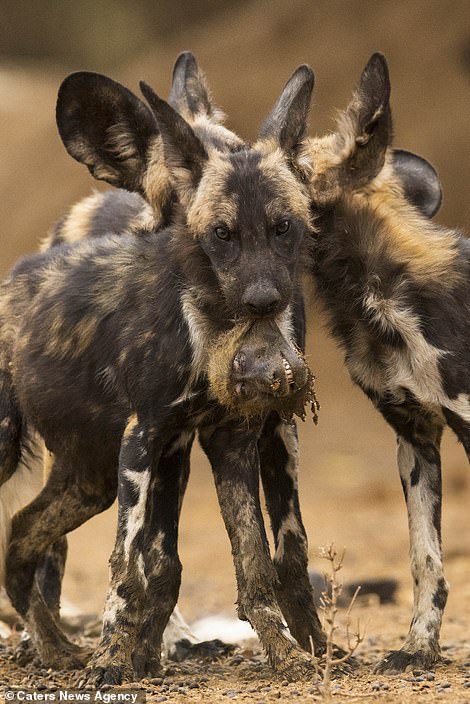 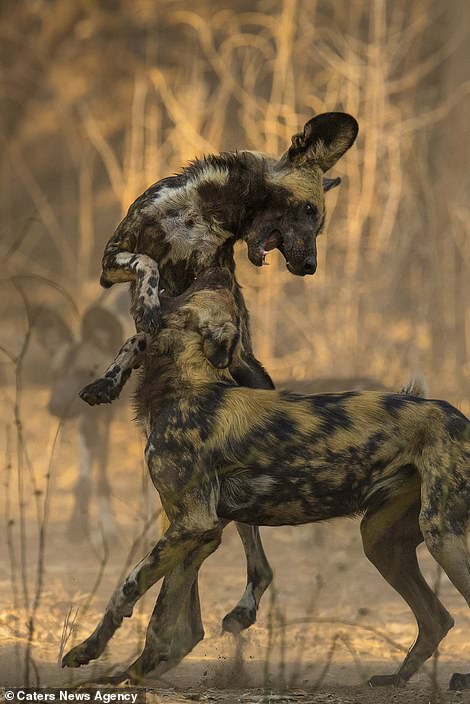 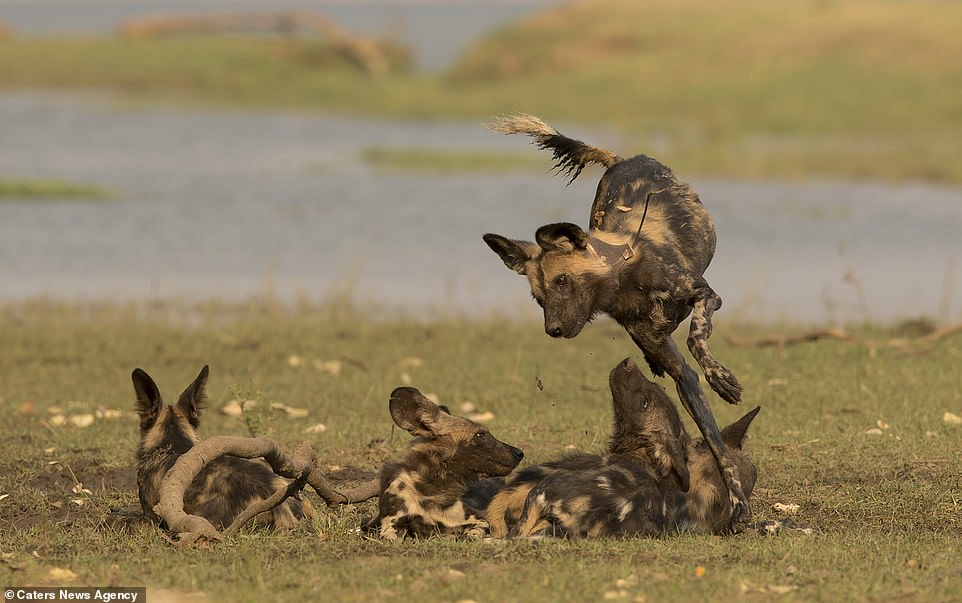 Nicholas’ passion for saving the incredible creatures led him to set up the Painted Wolf Foundation to raise awareness of their plight and release the book Painted Wolves: A Wild Dogs Life.

He added: ‘There are only 6,500 left in the world and in the race to extinction, they are winning.

‘The reality is that these are beautifully social creatures that live in intricate tightly knit family groups that really care for each other.

‘And yet mankind has been doing all it can to destroy them.’ 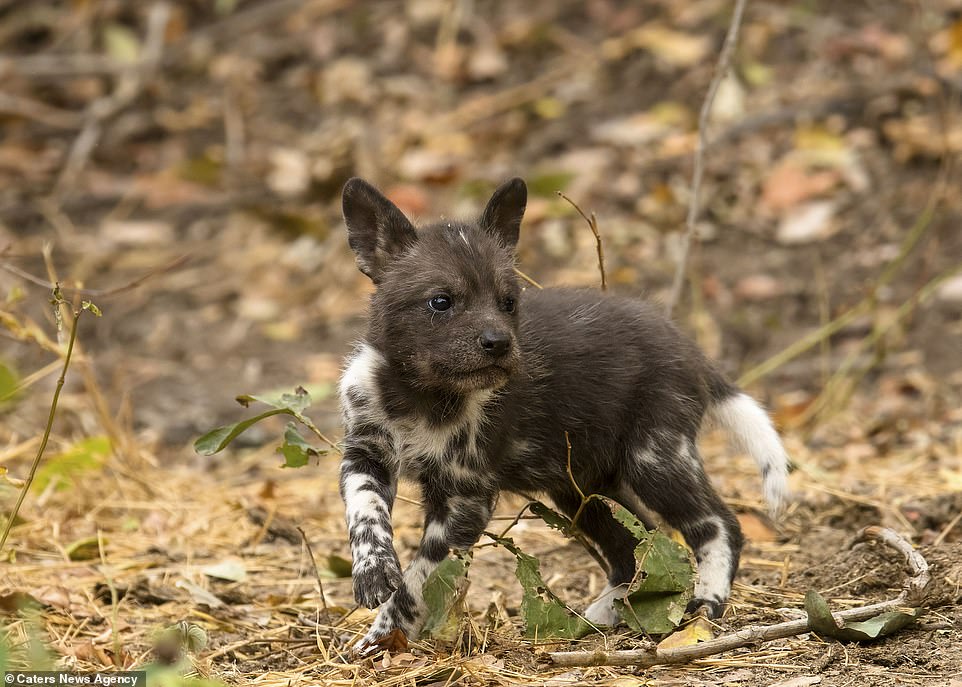 The population of the African wild dogs has depleted in recent years with 6,500 currently in existence due to habitat loss causing by human over population and disease 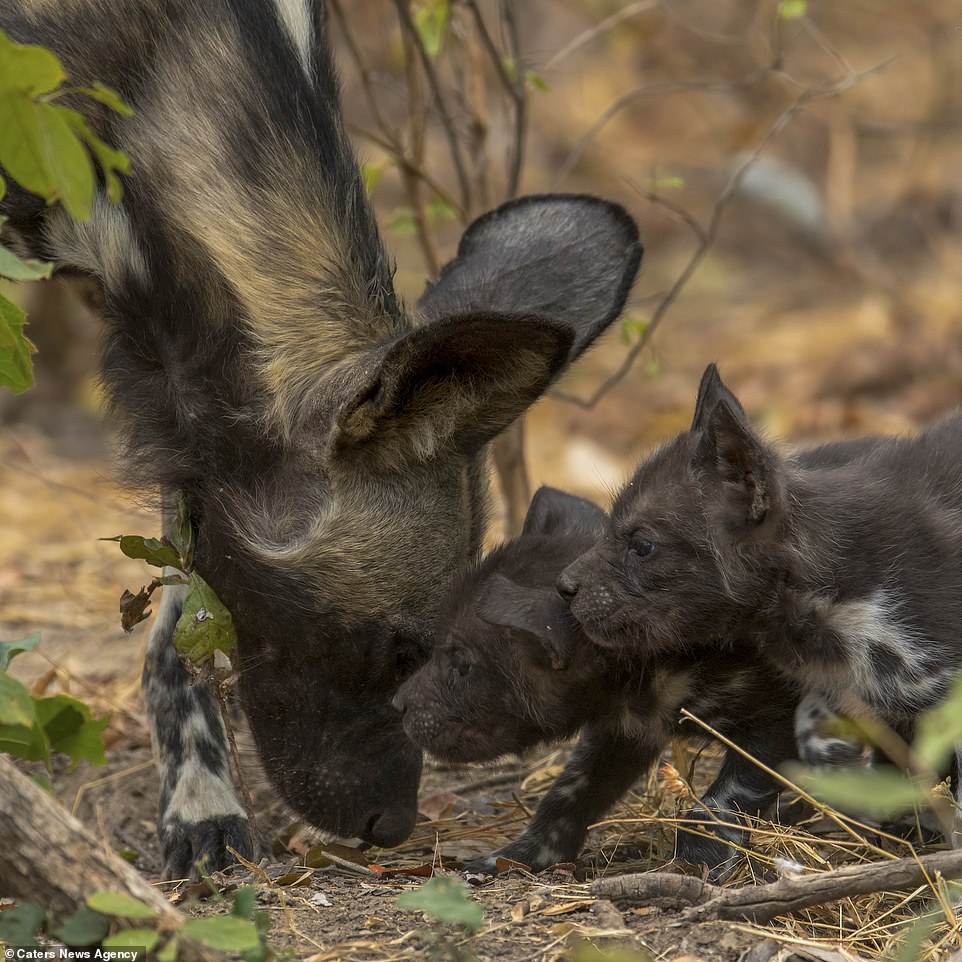