A newborn delivered after his mother crashed her SUV and died while on her way to a hospital to give birth has also died.

Twenty-seven-year-old Desiree Strout was driving from Canaan to nearby Skowhegan to have labor induced when her vehicle hit black ice, struck a snowbank and rolled over onto a frozen pond Monday morning.

Officials say her son, Gage Arthur Weeks, was in critical condition after being delivered by an emergency cesarean section.

Desiree Strout, 27, died on Monday while driving to the hospital to be induced while her husband Harry Weeks, 29 (right) suffered a punctured lung and lacerated liver. One of their eight-year-old daughters was in the car with them and suffered minor injuries 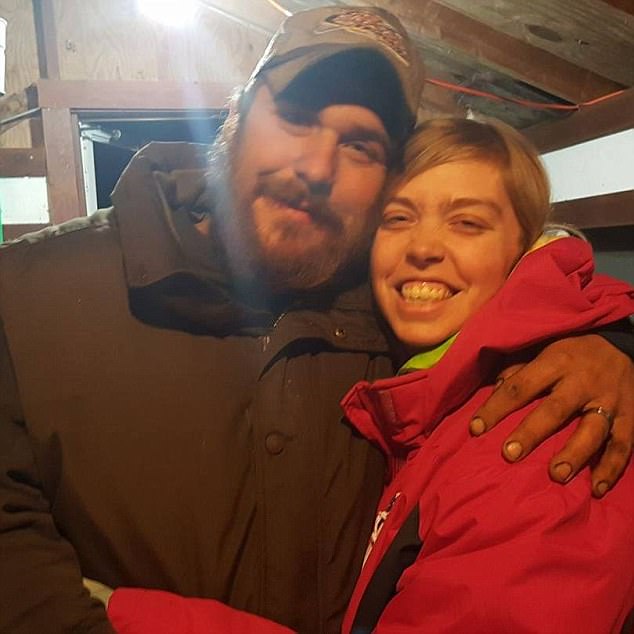 On Thursday, Strout’s newborn son died, just three days after he was delivered in an emergency c-section. Strout pictured above with her husband

The family released a statement saying they are ‘saddened to share Gage Arthur Weeks has left this world to spend eternity in his mother’s arms’.

Strout’s husband, Harry Weeks, and eight-year-old daughter were hospitalized after the crash.

Authorities say Weeks suffered a punctured lung and a severed liver, but he’s expected to survive. Their eight-year-old daughter suffered only minor injuries. The couple has another daughter who was not in the car at the time.

The vehicle skidded and hit a snow bank sideways, flipping over several times before coming down on the driver’s side on a frozen pond.

He said speed was not a factor in the crash, but did not respond to questions over why Strout had been driving instead of Weeks.

Relative Travis Weston said Strout was ‘fiercely independent’ and that the 2005 Chevy Trailblazer they were driving was ‘her baby, and she wouldn’t have let anyone drive it unless she had to.’

A GoFundMe campaign has been set up to raise money for funeral costs and hospital bills. As of Friday morning, the fund had raised more than $18,000 of a $50,000 goal.

Addressing Desiree’s mother Andrea, Robin Hubert added: ‘Oh my Andrea I’m so so sorry. I love you and my heart aches. Praying for you and family.’