A baby born weighing less than a tub of butter, so small her hand could fit through her mother’s ring, has been dubbed a miracle after defying the odds to survive.

Abigail, who was three months premature, is now getting ready to go home for the first time after a staggering six months in hospital.

She had been given less than a 50 per cent chance of survival.

Parents Taryn Meijers and Owen Peters said the journey had been tough. Within moments of Abigail’s birth, the tiny baby was placed on life support

The newborn had a condition known as fetal growth restriction and weighed just 422 grams.

The condition affects about 20 babies in Australia each year, and doctors say the odds of survival are low.

The bub was so tiny her hand could fit through her mother’s ring.

Within moments of her birth, the baby girl was placed on life support.

Neonatologist Dr Atul Malhotra, who was at Abigail’s delivery, said it was difficult getting a breathing tube into her tiny body and described the situation a ‘pretty touch and go’.

Mr Peters said that the family spent the next 179 days by Abigail’s bedside – taking her situation day-by-day – knowing there was only a 50 per cent chance or less of her survival. 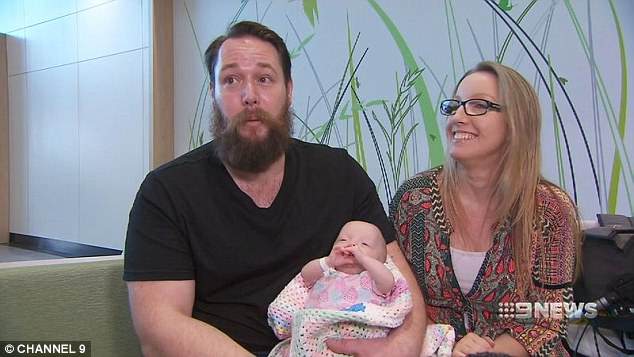 What is fetal growth restriction?

* Causes of fetal growth restriction vary but include placenta abnormalities, high blood pressure in the mother, infections and smoking or alcohol abuse

There were a lot of things stacked against her,’ Mr Peters said.

The first-time parents are now able to take their six-month old daughter home, thanks to the work of staff and researchers at Monash Children’s Hospital.

‘One of the things that is great about Abby is that she’s not only going home and she survived, but she’s going home with a pretty bright future,’ Dr Malhotra said.

Although little Abigail is still at risk of cerebral palsy and development issues, ongoing medical advancements mean those health risks can be detected earlier.

‘Basically, she is a miracle,’ Mr Peters said.