A leading family judge is to rule whether a transgender man’s baby could become the first born in England or Wales to not legally have a mother.

The baby is the child of a single parent who was born a woman but now lives as a man after undergoing surgery.

He wants to be identified on the birth certificate as the child’s ‘father’ or ‘parent’ but the law requires him to be registered as the mother as he gave birth to the child.

Sir Andrew McFarlane, President of the Family Division of the High Court, is due to make a decision on what will be on the child’s birth certificate following a trial scheduled to take place at the High Court in London in February.

According to lawyers, the baby could become the first person born in England or Wales to legally not have a mother.

Judges have already heard that the man had been biologically able to get pregnant and give birth but had legally become male when the child was born.

The man has taken legal action after complaining of discrimination.

He says forcing him to register as the child’s ‘mother’ breaches his human right to respect for privacy and family life. 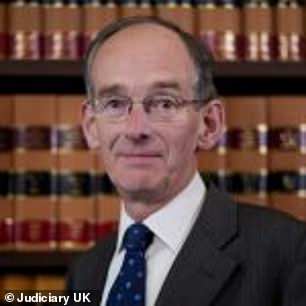 Sir Andrew McFarlane, President of the Family Division of the High Court, is due to make a decision on what will be on the child’s birth certificate

It hit the headlines in June after another judge oversaw a preliminary hearing.

Mr Justice Francis said then that the issue had never been raised in a court in England and Wales before.

The judge said if the man won his fight ministers might have to consider changing the law.

He ruled that the baby could not be identified in media reports and said journalists should not reveal the baby’s gender or age, or the man’s age, and should not give any clue as to where the man and the child lived.

Lawyers say other transgender men have given birth but have been registered on birth certificates as mothers.