By Holly Hales For Nca Newswire

A baby who was born with major internal organs outside her body has defied the odds and is about to enjoy her first Christmas.

Little Elsie’s parents, Hannah and Simon Cox, from Queensland’s Sunshine Coast, were told the shocking news at a 12-week scan that their baby had a ‘giant’ omphalocele.

The condition involves a baby’s organs growing outside its body in the umbilical cord.

Elsie’s stomach, liver and intestines were all outside her tiny body, presenting a huge challenge for her medical team at the Mater Centre for Maternal Fetal Medicine at Mater Mothers’ Hospital that had to ensure her organs did not rupture during birth.

Elsie’s stomach, liver and intestines were all outside her tiny body, presenting a huge challenge for her medical team

On May 30, 39 weeks into Ms Cox’s pregnancy, a complex caesarean section was performed by Dr James Aridas to deliver Elsie, who weighed 2.56kg.

Dr Aridas said a team of more than 10 medical professionals collaborated in the successful delivery, including surgeons and anaesthetists as well as midwives and nursing staff.

‘We needed to be careful with Elsie to not put pressure on her abdomen or the umbilical cord during the delivery,’ Dr Aridas said.

‘This was definitely the biggest omphalocele I have seen in my career.

‘It was a very delicate, challenging delivery – but everything went to plan.’

Mater director of neonatology Pita Birch said omphaloceles affected one in 4200 live births, but ‘giant’ ones were much rarer and often associated with other anomalies.

One in five babies born with a giant omphalocele do not survive. 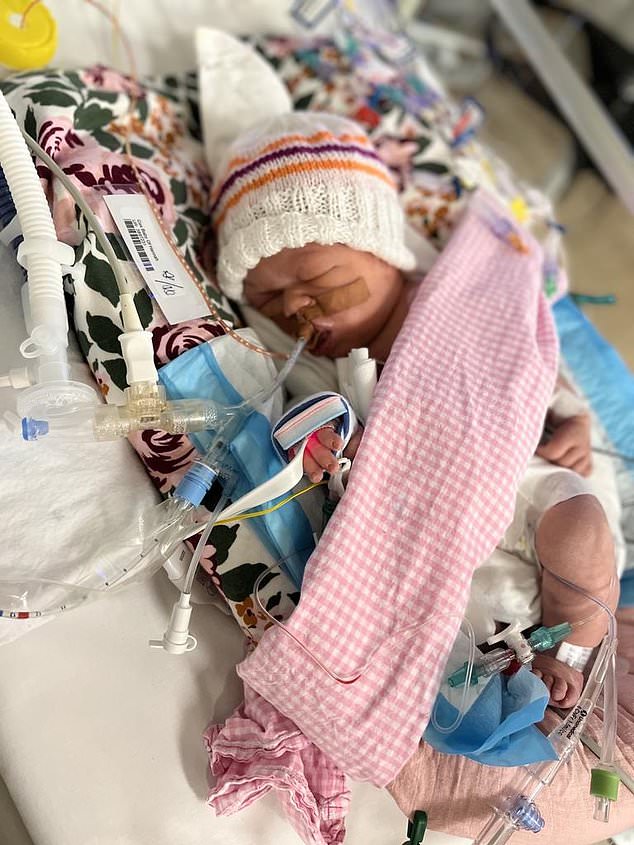 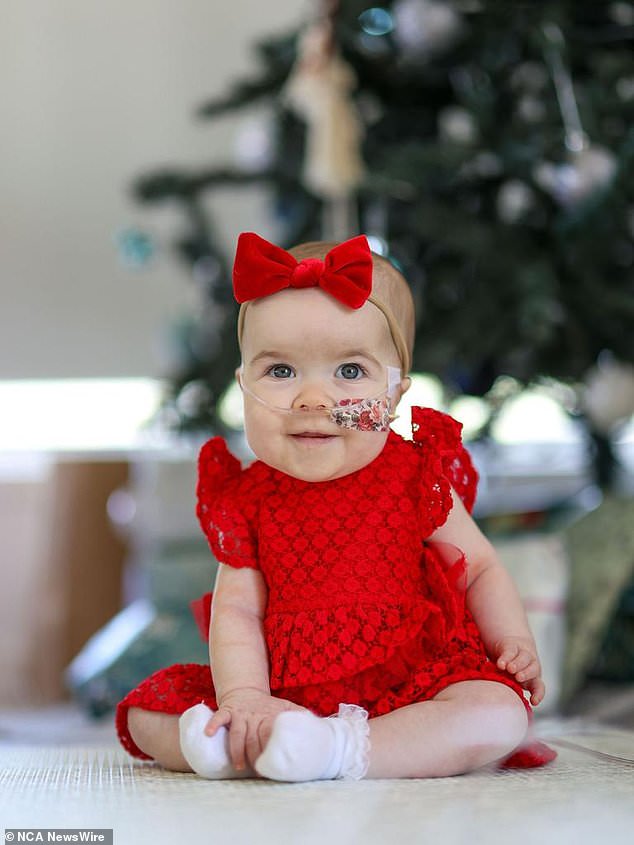 After months in hospital, Elsie has defied the odds in her first year and will spend her first Christmas at home

‘There was a plan to attempt at least a partial closure of Elsie’s abdomen, but she was too sick and had a number of respiratory problems at birth,’ Dr Birch said.

She said care for Elsie had been a ‘big team effort’, including input from her parents who were ‘very attentive and actively involved’ in her care.

Ms Cox said Elsie’s condition had affected her respiratory system, as her ribs and chest had formed into a cone shape and she might require surgery when she gets older.

But otherwise Elsie, who spent almost two months being cared for around-the-clock at Mater Mothers’ Hospital, is a thriving and happy baby.

‘Her tummy is pretty much flat now; she has a little bump which looks like a hernia, but it’s actually just her intestines still moving down. Her body still needs some time to heal.’

The couple are looking forward to celebrating their first Christmas with their amazing girl.

‘What we have gone through this year has felt like a lifetime. I look at photos and see how far Elsie has come and think ‘she’s our miracle’,’ Ms Cox said.

‘It’s been a big journey and she’s worth every minute of it.

‘We never imagined we would be home for Christmas with Elsie and sharing her with our friends and family is a precious joy.’