The answer to one of life’s great questions has been answered – what exactly do baby crocodiles sound like?

It turns out the answer is perhaps more familiar than many would have anticipated.

The video was recorded by their keeper, Brad Valle, at the The Dragonwood Wildlife Conservancy organisation in Pine Lakes, Florida.

In the video, 13 baby Cuban crocodiles, which are distinguished by their black and yellow speckles, can be seen plodding around. 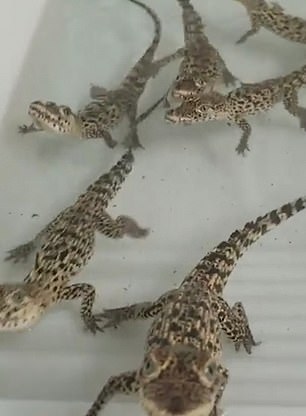 They have been placed in a white, plastic tub that has been filled with a few inches of water.

The group are continually communicating to each other with a series of noises that sound as if laser guns are being fired back and forth like in a video game.

Brad extends his hand into the tub as several of the newborns start climbing up the ramp.

One enthusiastic youngster slowly even crawls up his hand.

Brad starts talking to the group and says: ‘What? You’re a sweetheart.’ 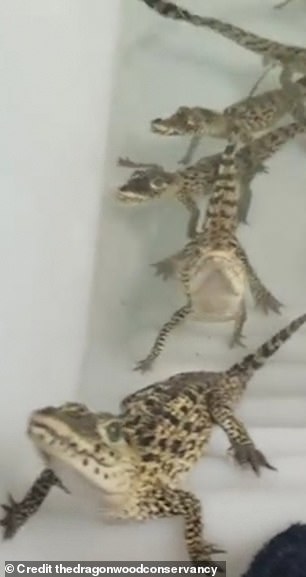 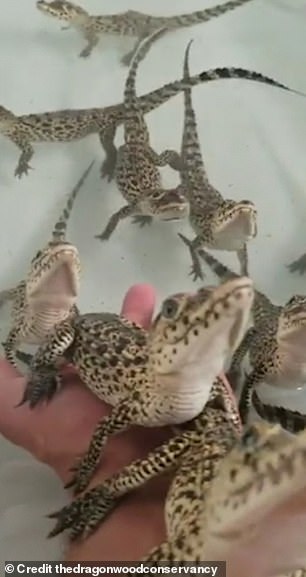 As a second of the baby reptiles also scrambles onto the keeper, he adds: ‘You’d all climb all over me if you could.

The Dragonwood Wildlife Conservancy is a non-profit organisation that is dedicated to the conservation of threatened endangered and critically endangered reptiles.

Cuban crocodiles have a conservation status of ‘Critically Endangered’.

Cuban Crocodiles mainly feed on fish, small mammals and turtles but they can also leap from the water, using powerful tail thrusts below the surface. This allows them to catch birds and smaller mammals from overhanging branches.

When in groups the crocodiles form a dominance hierarchy based on gender, size and temperament.

They also have the smallest geographical range of any crocodile as they encompass an area less than 200 square miles (500 square kilometers). They are now only found in Cuba’s Zapata Swamp in the southwest and Lanier Swamp on Isla de Juventud.