A newborn baby died after catching herpes from a ‘kiss of death’, her heartbroken mother has revealed.

Aliza Rose Friend was just eight days old when she passed away after developing neonatal herpes from the HSV-1 virus.

Her mother Abigail, 19, claims Aliza was healthy for the first 36 hours of her life before she developed a fever, became lethargic and lost any interest in food.

The newborn quickly deteriorated as the disease ‘ate her lungs and brain’, leaving her struggling to breathe and suffering seizures.

After doctors told Miss Friend and her partner Tyler Hensley, 26, there was ‘real hope’ Aliza would make it, she was declared brain dead on May 20 and medics turned off her life-support.

They later told Miss Friend, from Oakland, Maryland, her daughter likely caught the infection after being kissed by someone with the virus, which typically manifests as a cold sore.

In a Facebook post that has gathered more than 500,000 responses, she wrote: ‘WASH YOUR HANDS. DO NOT KISS BABIES.’

Newborn Aliza Rose Friend died after catching neonatal herpes from ‘the kiss of death’. Pictured in hospital, the youngster had to be hooked up to various machines after the virus ‘ate away her lungs and brain’, leaving her struggling to breathe and suffering seizures 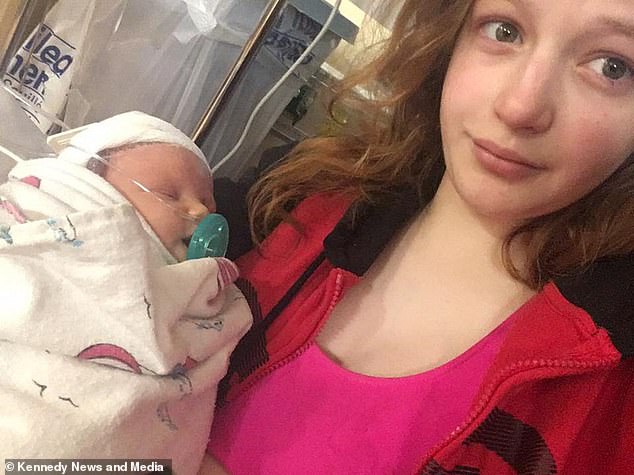 Pictured before she became unwell, her mother Abigail Rose Friend was told by doctors her daughter caught the infection after being kissed by a carrier or touched by unwashed, contaminated hands. Due to her having many visitors, it is unclear who passed the virus on

‘There’s not a moment goes by that I don’t think about her. She’s in my thoughts every day,’ Miss Friend said.

Although doctors have told Miss Friend her daughter became unwell from a kiss, or after being touched by unwashed, contaminated hands, there is no way of telling who passed the virus on.

‘Aliza was healthy for a day and a half. It took the virus six and a half days to completely destroy her body,’ Miss Friend said.

‘Some family and a few close friends came to visit her when she was born. There’s no way to ever know who gave it to her because it’s such a common virus. 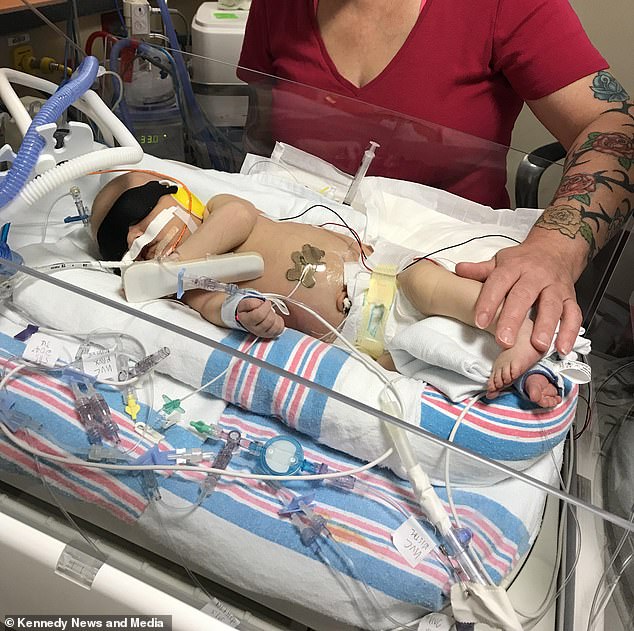 Doctors initially said there was ‘real hope’ Aliza may live but sedated her to keep her comfortable. Miss Friend says she vomited when she saw all the wires coming out of her baby

WHAT IS NEONATAL HERPES?

Neonatal herpes occurs when a newborn baby catches the virus.

The herpes simplex virus is highly contagious and spreads via cold sores or genital ulcers in adults.

Herpes can be very serious in newborns due to their immune systems not being strong enough to fight off the infection.

If the virus spreads to a baby’s organs, nearly a third die even if they have been treated.

A baby can be at risk if its mother catches genital herpes for the first time during the first six weeks of her pregnancy.

Such women can pass the infection to their babies if they have a vaginal delivery.

Cold sores are at their most contagious when they burst but remain contagious until they have completely healed.

A baby may be infected if it:

If a baby becomes lifeless, will not wake, has breathing difficulties, or has a blue tongue or skin, call 999 immediately.

To reduce the risk of a baby being infected, people should not kiss infants if they have a cold sore and should wash their hands before touching them.

Aliza was a happy, healthy baby for the first day-and-a-half of her life but then quickly took a turn for the worse.

‘She started running a fever and didn’t want to wake up from her naps or eat,’ Miss Friend said.

‘She started to swell up from all the fluid building up in her lungs.

‘Her brain swelled up so badly and her lungs were so swollen that you could see all the veins in her chest.’

While fighting to save her life, doctors sedated Aliza to help keep her comfortable.

But the combination of different drugs caused the newborn to suffer seizures.

‘She was having trouble breathing and they had to put her on oxygen and eventually she was on so many machines and tubes you couldn’t even tell she was a baby,’ Miss Friend said.

‘I would go in and sit with her for a little bit and I would just sit there and see her on these machines and see them breathing for her and I would throw up.’ 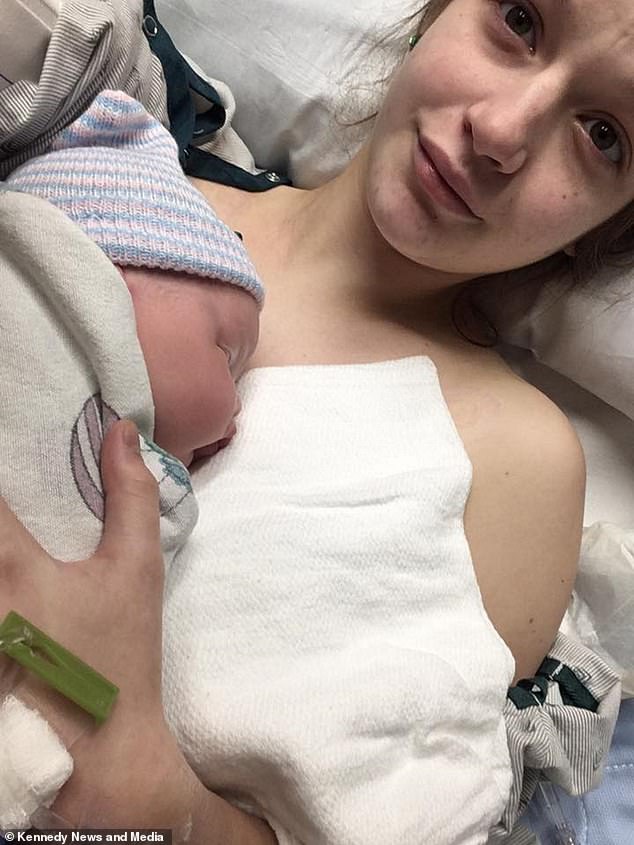 Pictured at just one-day-old, Aliza was healthy for the first 36 hours of her life but then developed a fever, became lethargic and lost all interest in food. Before she became unwell, Miss Friend claims her daughter was ‘chubby and happy and cheeky’

Doctors claimed the illness was so rare it was practically a ‘fluke’ and assured Miss Friend and Mr Hensley their little girl may pull through.

‘They told us on May 19 that they didn’t think she was going to get better but that she could,’ Miss Friend said.

‘Then I asked if there was hope or false hope and they said there was real hope.’

But just the next day, Aliza was declared brain dead and her mother sang ‘you are my sunshine’ as her baby passed away.

‘The only way to describe this is that it’s absolutely soul shattering,’ Miss Friend said. ‘Aliza was chubby and happy and cheeky.’ 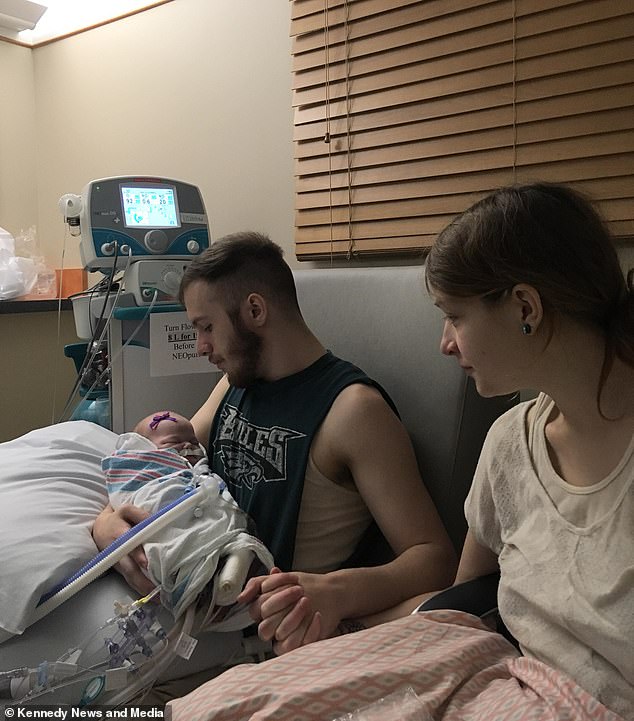 Pictured being held by her father Tyler Hensley while battling the virus, so much fluid accumulated in Aliza’s lungs Miss Friend claimed you could even see the veins in her chest 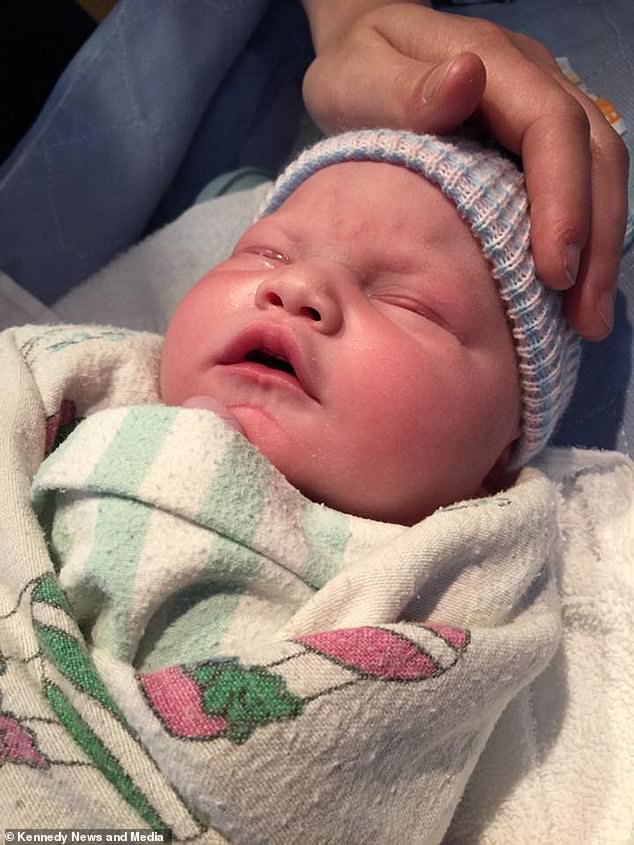 Pictured at just one-day-old before she became unwell, doctors declared Aliza brain dead on May 20 and turned off her life-support while Miss Friend sang to her ‘you are my sunshine’

Months after her daughter’s death, Miss Friend finally feels strong enough to speak out to encourage other parents not to let people kiss their babies.

‘Someone touched her without washing their hands or kissed her face while being a carrier of the virus. And anyone can be a carrier and not show signs!

‘It’s fatal until at least two weeks old and parents can pass it on to them as well! Please help us save more babies lives by sharing our story and NOT kissing babies.’

‘I didn’t even know it was possible for babies to get this until it had already happened,’ Miss Friend said.

‘The illness is so rare that as a new mum you don’t hear about it, and yet it’s such a common virus. No one seems to know that babies can die from this.

‘It attaches to their spine and causes fluid to build up around their lungs and around their brain and it essentially just eats away at the inside of their bodies until they go brain dead.

‘There’s no cure. It’s fatal to infants that are two weeks old or younger, and if they do manage to survive they need 24 hour round the clock care for the rest of their lives.’