A baby elephant has died after suffering horrific injuries when a hunter tied her up and abandoned her in a forest in eastern Thailand.

The one-month-old elephant was found by villagers in Rayong, tethered to a fence with a rope cutting deep into her ankle and exposing her bone.

It is not known how long the baby elephant, christened Baitong, had been without her mother’s milk when she was rescued, but she was so weak that she was barely able to stand.

Heartbreaking: The one-month-old elephant was found by villagers in Rayong, eastern Thailand, tethered to a fence with a rope cutting so deep into her ankle her bone was exposed

Baby elephants are completely dependent on their mothers for food until they are around two years old, and it is not known what happened to Baitong’s mother.

Baitong was rescued on December 18, but despite round-the-clock care and an emergency amputation of her infected foot, she died on Friday.

Prasarn Buangsook, a vet from the Bureau of Conservation Area Management, said: ‘The wire cut Baitong’s foot deep through her bone. She was badly wounded and skinny because she hadn’t eaten anything for days.’

‘Her whole foot skin was dead and her bone has an huge, incurable wound.

‘Cutting her foot off was needed to prevent her from dying of infection,’ Buangsook added. 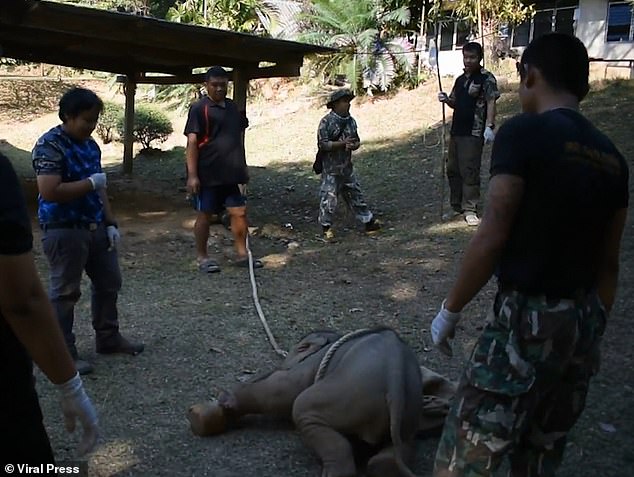 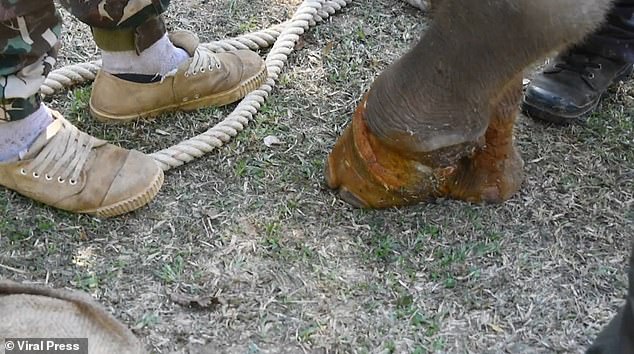 Despite initially making a recovery after the surgery, Baitong collapsed and died last week

Buangsook said vets had noticed that she was slowly starting to recover, but she still need to be under 24-hour care.

Last Thursday, Baitong was playing with some of her carers when her condition suddenly worsened and she collapsed later that evening.

Several vets worked through the night to treat Baitong but she passed away on Friday morning.

Nathanong Panpech, one of the vets, said: ‘Baitong’s blood oxygent levels were very low, causing a high level of acid in the blood.

‘We gave her an infusion, medicines, and oxygen but she couldn’t bear it any longer.

‘We are all close to her and very sad to see her go. Hope the death of Baitong will remind all the hunters that animals are innocent and they do not deserve any of this at all.’