Warsame Mohamed, 23, had been wanted by police after attacking 21-year-old Zakir Nawaz over a ‘minor road prang’ in Birmingham which ended in him being stabbed to death

A baby-faced killer involved in the fatal knifing of a father-to-two has been jailed after sneaking back into the UK from his Holland bolthole.

Warsame Mohamed, 23, had been wanted by police after attacking 21-year-old Zakir Nawaz over a ‘minor road prang’ in Birmingham which ended in him being stabbed to death.

Killer Mohamed later fled the country but was arrested after returning as an illegal immigrant and has now been jailed for four and a half years after admitting manslaughter in the case.

In September 2016, killer Mohamed, along with suspected murderer Abdulahi Shire, 22, collided with a Fiat hire car rented by a friend of Mr Nawaz, but did not stop.

Mr Nawaz went looking for the pair before eventually confronting them in the Washwood Heath area of Birmingham.

But the matter then escalated with Mohamed repeatedly kicking, punching and stamping on Mr Nawaz.

Moments later the victim was stabbed in the chest by another man, and the pair then fled from the scene and is believed to have sought refuge in Holland. 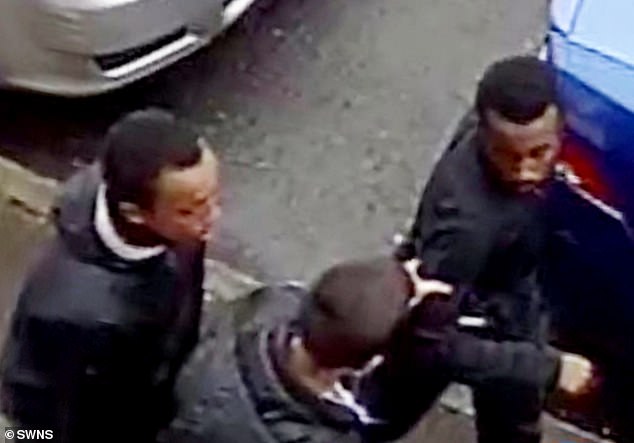 Mr Nawaz was pronounced dead at the scene minutes later while Mohamed and Shire drove off.

After two year on the run, Mohamed sneaked back into the UK and was arrested after police spotted him walking on the M40 in High Wycombe on January 29.

Mohamed tried giving false details but checks revealed he was wanted over killing and was arrested.

The Nissan Almera that was driven by Mohamed and another man at the time of the initial prang had been found the day after the killing abandoned on Mendip Road near to the scene. 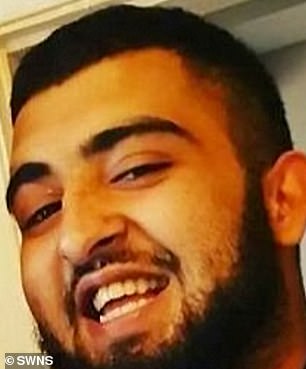 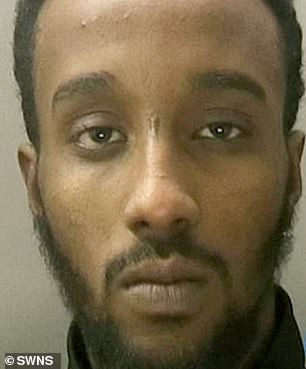 After father-to-two Zakir Nawaz (left) was repeatedly beaten and thrown to the floor by Mohamed it is alleged he was stabbed to death by Abdulahi Shire. Police continue to search for Shire so that he can stand trial for murder

It had been stripped of its number plates and there had been a failed attempt to set fire to the car.

Forensics experts found Mohamed’s DNA on a pair of blood-stained jeans in the boot and a cigarette butt in the car’s ashtray, while his fingerprint was also recovered from a petrol canister in the boot.

A painstaking CCTV trawl showed the car’s movements before and after the attack, while facial mapping experts determined a strong likeness to Mohamed and the man caught on CCTV punching and kicking the victim.

Mohamed was due to stand trial for murder – with detectives arguing he played a ‘joint enterprise’ role despite not delivering the fatal stab wound – but he admitted a lesser charge of manslaughter.

He was jailed for four-and-half years at Birmingham Crown Court on Wednesday.

‘He goes into the melee, throws lots of punches and can be seen on CCTV running off with the man we believed stabbed Mr Nawaz,’ he added.

‘Our argument was that he knew a member of his group was armed with a knife and was complicit in the killing.

‘My detectives worked really hard to secure this conviction, scrutinising lots of CCTV to piece together a picture of what happened and called upon forensic and facial mapping experts to link Mohamed to the offence.

Meanwhile an international arrest warrant has been issued for Abdulahi Shire who is suspected of fatally stabbing Mr Nawaz.

‘We are working with Europol in a bid to trace Abdulahi Shire and bring him back to the UK to stand trial for murder.’