Baby found abandoned on the Victoria Embankment: Tony May tells his story

A foundling who was abandoned on London’s Victoria Embankment in the middle of World War Two has revealed his 25-year battle to trace his family story.

Tony May, 77, from St Albans, was found in November 1942, wrapped in a bright blue women’s coat on a bench at the pier, before being brought to a police station near the Houses of Parliament and named ‘Victor Banks’ – in reference to the spot he was found.

He was then adopted by Arthur and Ivy May in 1944, along with a little girl, and while they were open about his adoption, he never felt the urge to look into his biological family – until his adoptive parents passed away.

Speaking on a BBC podcast, he admitted: ‘It was no big deal really. But I remember my sister went around telling everyone we were adopted and I was so embarrassed.’

Tony May, 77, from St Albans, was found in November 1942, wrapped in a bright blue women’s coat on a bench at the pier. Pictured with his half-sister with whom he was reunited

But when he started searching for his birth parents, he found it much harder than he had ever imagined – even appearing on radio and TV during the 1990s in a bid to find further information.

Tony’s break came after he joined a Facebook group for foundlings in 2016, and a woman called Julia Bell, a genetic genealogist who has used DNA to track down American servicemen who fathered children during World War Two, offered to help him out – in what would be her ‘most complex case to date’.

Intrigued by his theory that he may have been fathered by a solder due to the timing of his abandonment, she started to look into his family tree, searching birth records, DNA on ancestry sites and old newspaper clippings.

Julia’s first clue was a newspaper clipping she found from 20 December 1942 reporting Tony’s discovery, reading: ‘A blue-eyed boy four weeks old, wrapped in a bright blue jacket, part of a woman’s costume, has been found abandoned on the Embankment.’ 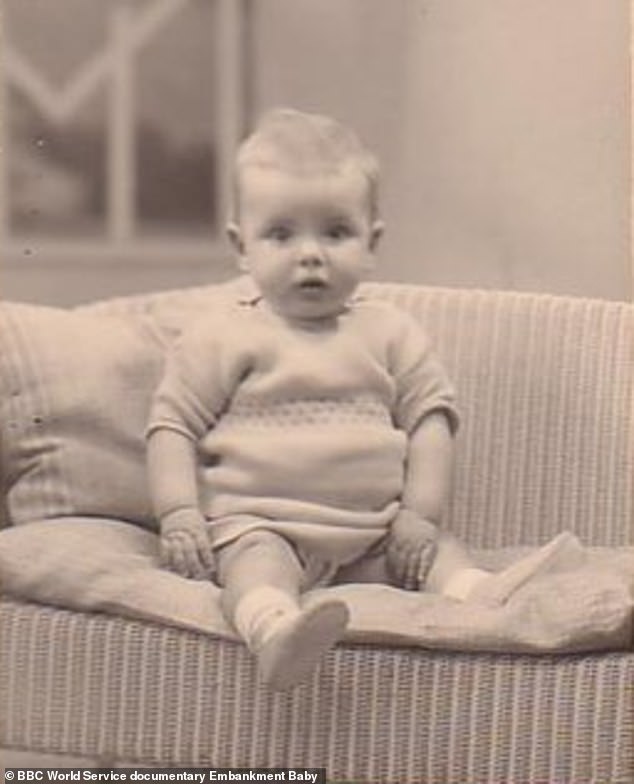 Tony as a baby, a foundling who was abandoned on London’s Victoria Embankment in the middle of World War Two 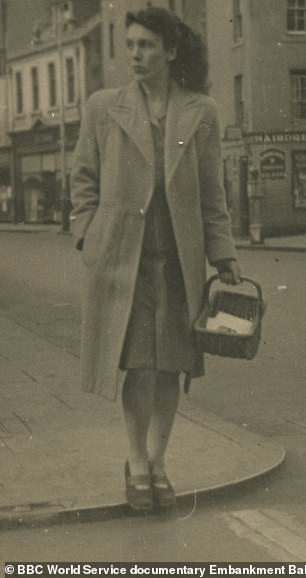 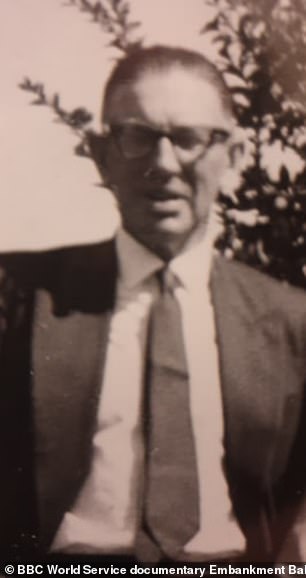 It transpired Tony’s father was a married soldier Eric Wisbey (right), who at 35, had an affair with his mother Mary, 22, (left) before moving to Australia, leading her to give him up

She then embarked on sharing Tony’s saliva with a range of privately owned companies that offer DNA matching with other clients on their database.

This uncovered a fourth cousin called June, from Scotland, who Julia suspected shared great-great-great-grandparents with Tony, and who was able to share her full family tree – leading them to find a mutual cousin.

Explaining the method of researching three people’s ancestry, called ‘triangulating’ Julia said: ‘I found an ancestor pair living in the 1860s that all three people shared. Then I created a chart with all the different possible lines of descent, with every marriage and every birth.

‘I looked for people further down the lines who were living descendants and asked them to do a DNA test. Each time I found a closer match that would help me refocus and refocus, getting closer to my goal.’ 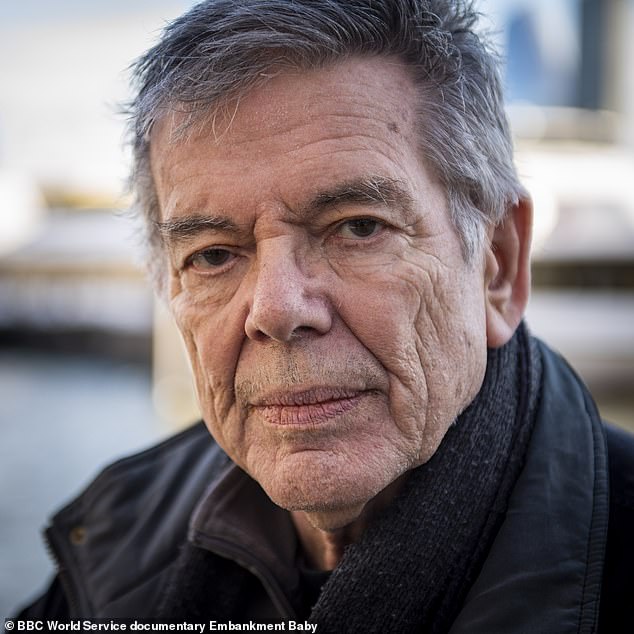 Two years on, in 2018, Julia finally stumbled on a couple she believed to have been Tony’s maternal late grandparents from Edinburgh, and while their son Bill, who is in his nineties, was reluctant to do a DNA test, Bill’s daughter Kathleen agreed.

And while Bill’s sister Mary had died in 1988, she had two surviving children, born just four years after Tony, and daughter Sheena – Tony’s potential half-sister – agreed to meet Julia in 2019.

Speaking of the moment she discovered her mother’s secret past, Sheena said: ‘[My cousin] came here and told me, ‘I’m 80% sure that your mum is Tony’s mother.’ Well you could have knocked me over with a feather, I knew nothing about it! 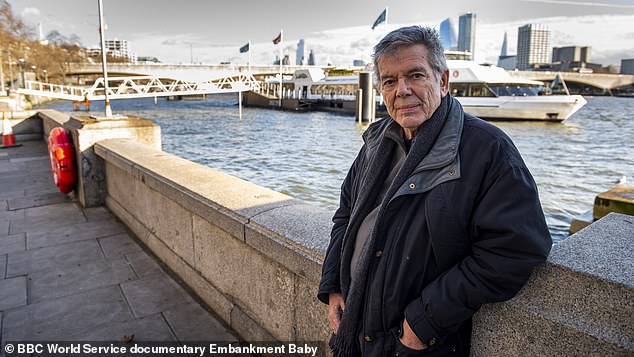 ‘I thought, ‘How could my mum have done it?’ And then I thought, ‘What must she have been through to feel she had to do something like that?’ If only she’d been able to talk to us.’

But she was left with no doubts when she agreed to meet Tony last year, recalling: ‘He walked in and I thought: ‘That’s my mum walking towards me.’ He was so much like her it was scary. I just couldn’t take my eyes off him.’

Sheena has helped Tony build a picture of her mother Mary, who married Sheena’s father in 1946 and had two children, describing her as someone who would ‘do anything for anyone’.

Tony and Julia then embarked on finding his birth father, with it emerging that that Mary had secretly been married before – and threatened to jump off the bridge where Tony had been left the same day, before disappearing with her former husband – who she later divorced.

Mary had married a man from Kirkcaldy called James on 1 August 1942, but she applied for a divorce in 1946 – and racked with guilt over leaving the baby he had later been suicidal himself.

His daughter told Julia: ‘He was a very supportive and helpful person. It just seems such an out-of-character thing for him and I think it weighed heavily on him,’ she says.

‘In fact, in his late 70s he tried to take his own life and was treated for severe depression. I think the incident in 1942 with the baby [is something] he’d carried all those years and felt guilt and shame for. I think it contributed to his suicide attempt.’ 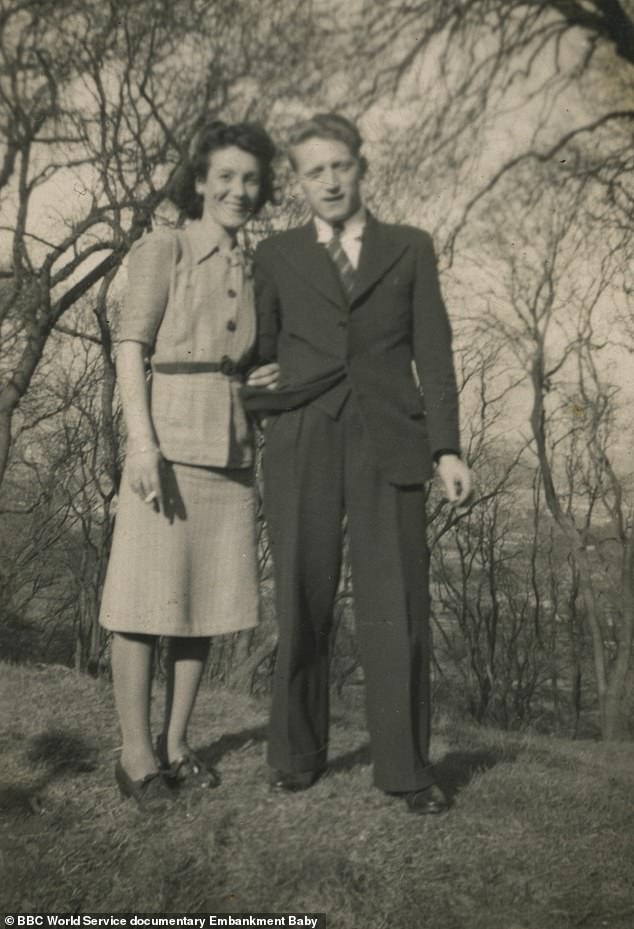 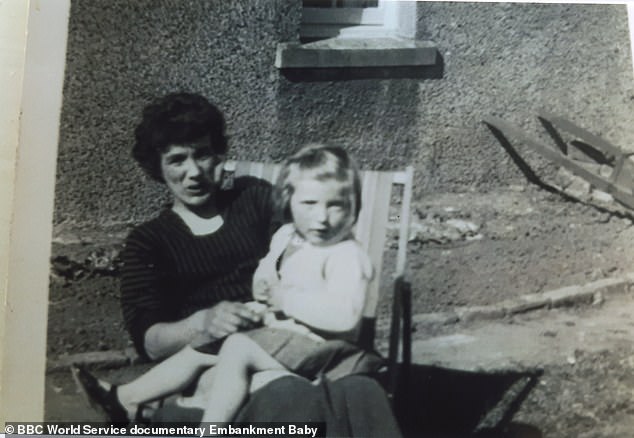 Mary pictured with Sheena, who is Tony’s half-sister – his father was a married soldier 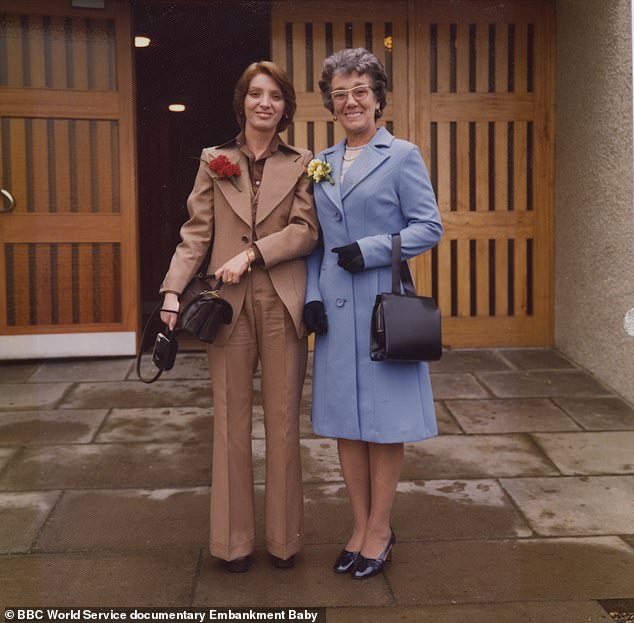 When Sheena, Mary’s daughter, learned the truth about her mother’s secret past, she said: ‘I feel angry and bitter that my mum felt she had to hide it all (pictured together)

However the man had not been Tony’s father, and further research into local DNA records located traces in Yorkshire and Hertfordshire,  and led to a soldier called Eric Wisbey, who had died in 2004.

Eric’s son – thought to be Tony’s half-brother Ken – had died in 2011, but left behind daughter Leesa, who Julia traced to Australia.

Leesa agreed to do a DNA test, which proved she was Tony’s niece, confirming that Eric had been Tony’s father.

Leesa told Tony that Eric was in the Army Pay Corps in World War Two in 1942, and stationed in Edinburgh, just a few miles away from Mary’s hometown of Kirkcaldy. 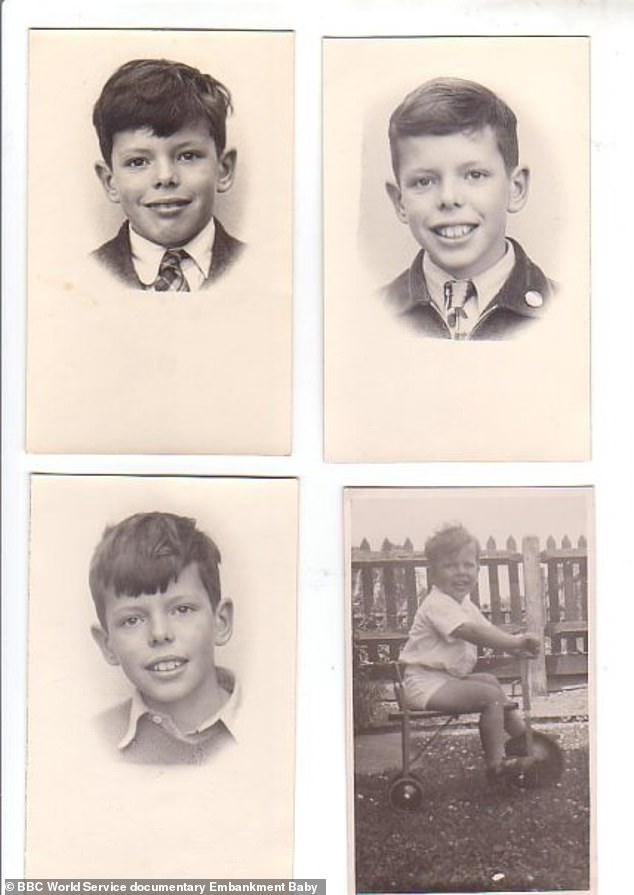 Tony, pictured in his youth at various different ages, said he always grew up knowing he was adopted 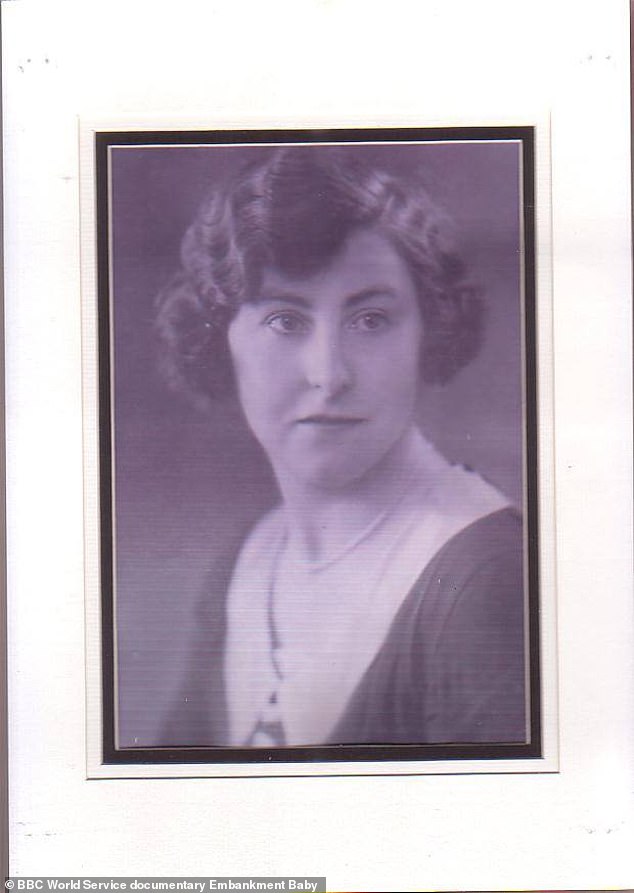 Ivy May who adopted Tony with her husband Arthur in 1944 along with a little girl, and they were open about his adoption

At the time Mary was just 22 and living with her parents, while Eric was 35 and married with a young son back in Australia.

Eric had returned to Australia leaving Mary pregnant and with no choice but to give Tony up – and Leesa admitted that her father Ken had always suspected he had a half-brother, but never got to the bottom of it before his death.

When Sheena, Mary’s daughter, learned the truth about her mother’s secret past, she said: ‘I feel angry and bitter that my mum felt she had to hide it all. What she must have gone through for the rest of her life, to my mind, is absolutely heart-breaking.’

Speaking about the discovery of his family in Australia, Tony said: ‘I have got a father that went out to Australia and now I’ve spoken to my father’s granddaughter out there over the internet. These are huge bonuses’. 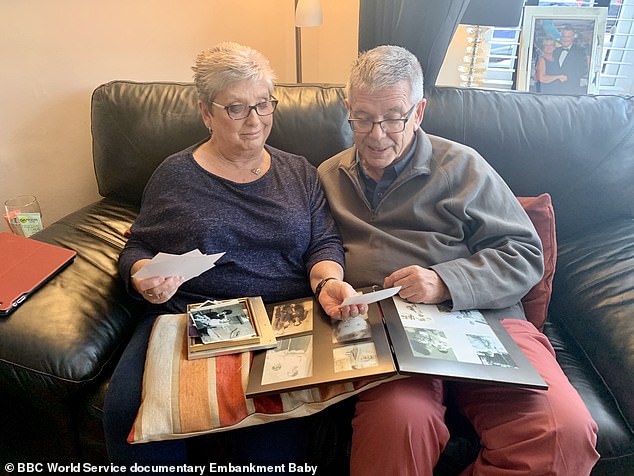 In 2018, Julia finally stumbled on a couple she believed to have been Tony’s maternal late grandparents from Edinburgh, locating his half sister Sheena (pictured together)

Tony’s relationship with his half-sister Sheena has gone from strength to strength, and he said: ‘When Julia first told me she had a result I think I was a bit stunned,’ Tony says.

‘But now I’ve met my half-sister, I’ve corresponded with my half-niece in Australia. I’m looking forward to introducing my son and daughter to Sheena’s family. It’s given me a new lease of life.’

He added of his biological mother: ‘I wish I could tell her ‘I’m sorry you had to do it.

‘I was sure she wouldn’t have abandoned me without a damn good reason.’