A baby girl who went under the knife while in the womb to treat and prevent a birth defect is now thriving at home.

Allee Mullen was 20 weeks pregnant when doctors diagnosed her daughter with spina bifida, a severe birth defect that occurs when the spinal cord doesn’t form properly.

Doctors at UPMC Magee-Womens Hospital in Pittsburgh, Pennsylvania, discussed all the options with Mullen and her husband, including in-utero surgery that could preserve neurological function better than a surgery after delivery.

So, in January, surgeons performed one of the first operations in the US to close the spinal column with the baby still in the womb.

There were no complications and Mullen gave birth at 33 weeks.

She was so grateful that she named her baby girl Emery Greene after the two doctors that treated her, Dr Stephen Emery and Dr Stephanie Greene. 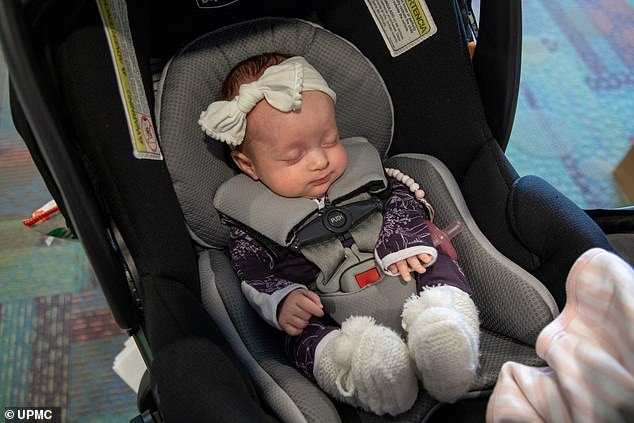 Spina bifida is a birth defect that occurs when the spinal cord doesn’t form properly, which can cause walking and mobility problems. Pictured: Emery Green shortly after birth

‘We found at my 20-week ultrasound. It was our anatomy scan that day,’ Mullen told DailyMail.com.’

Spina bifida is a defect of the neural tube, a structure from which the brain and spinal cord form.

It normally closes early in pregnancy. But, in those with spina bifida, the neural tube fails to develop or properly close.

This leaves the spine and the nerves susceptible to trauma and damage.

The condition’s symptoms can range from mild to severe, and can leave sufferers with physical and intellectual disabilities.

Children often suffer from walking and mobility problems due to weak muscles or nerves in the legs not working properly.

They can also experience bowel and bladder problems, difficulty breathing and swallowing, and a have higher risk of wounds.

‘In the third world, this is a lethal diagnosis and [children] die,’ Dr Stephen Emery, director of the Center for Innovative Fetal Intervention at UPMC Magee, told DailyMail.com.

‘In the developed world, you can close the damage, but children often have no function of their legs, no control of their bowel.’

Currently, there is no cure for spina bifida. Treatment consists of managing symptoms and preventing complications.

More than 1,600 babies are born with spina bifida each year in the US, according to the Centers for Disease Control and Prevention. 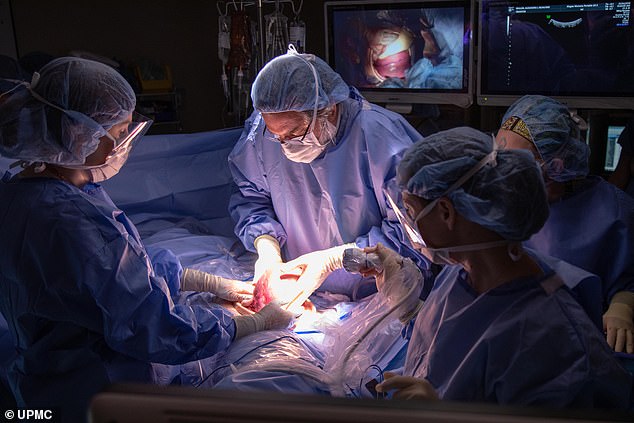 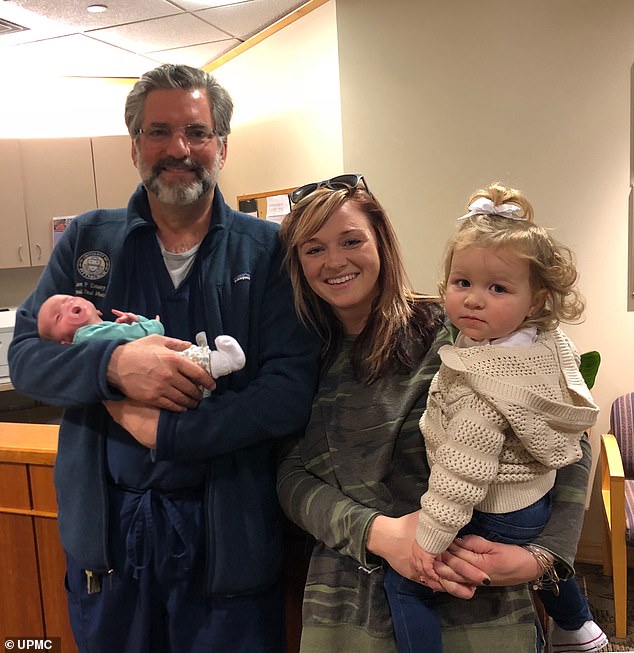 Emery Greene was born with her surgical wound healed and she performed well on her neurological tests. Pictured: Emery being held by Dr Emery, left, and Mullen, right, holding her older daughter, Anistyn

However, a randomized controlled trial published in the New England Journal of Medicine in 2011 found that performing surgery in-utero may result in better neurologic function for babies than if done after delivery.

‘It’s a really complicated risk-benefit assessment,’ said Dr Emery. ‘Put it all together and analyze it, and it’s the difference between walking and being in a wheelchair.’

Mullen went on a vacation with her family and discussed the options ahead of them, before choosing to have the in-utero surgery in Pittsburgh.

Dr Stephanie Greene, the director of vascular and perinatal neurosurgery at UPMC Children’s Hospital, performed the operation when Mullen was 25 weeks pregnant.

Emery was born in February with the surgery wound fully healed, and she performed well on her post-natal neurological exam.

‘The skin was closed, there was no evidence of leakage of cerebral spinal fluid,’ said Dr Emery.

‘She was kicking her legs and flexing her toes. And that’s cute but, more importantly, it means that neurologic function is there. We won.’ 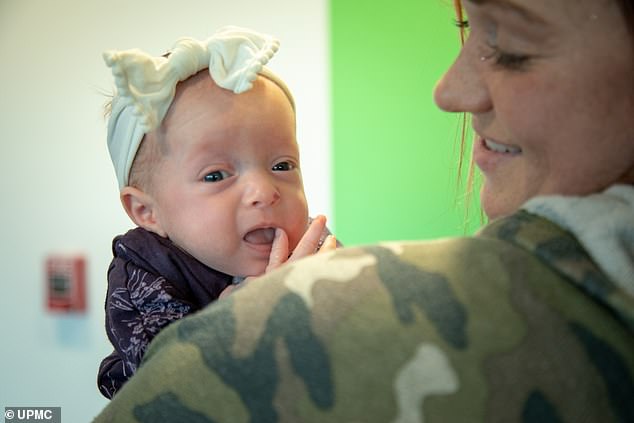 Mullen and her husband named their daughter after the two doctors that treated her: Dr Emery and Dr Greene. Pictured: Mullen holding Emery Greene 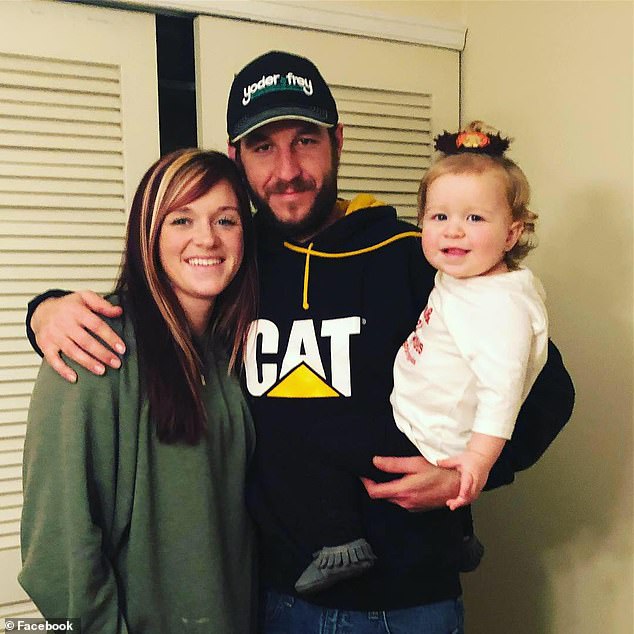 Emery will be watched closely for the first year of her to make sure she hits her developmental milestones. Pictured: Mullen, left, with her husband, Kevin, and their older daughter, Anistyn

Mullen said they were going to name their daughter Millie, but were having second thoughts.

It was her mother who suggested naming her after the two doctors.

‘They not only changed her life but our lives as a family,’ Mullen explained.

Both of the doctors said they were honored by this.

‘I was so flattered,’ said Dr Greene. ‘Nobody names their baby after their neurosurgeon. What higher compliment could they pay?’

For the first year of her life, Emery will be watched closely to make sure she doesn’t develop hydrocephalus or any other defects.

She will also likely meet with several specialists to make sure she’s meeting her developmental milestones.

‘Doctors can’t away all the birth defects, but we can make it more manageable,’ said Dr Greene.