A baby girl who died within an hour of being born might have survived if paramedics had saved ‘critical’ time by using their ambulance’s emergency blue lights on the way to hospital, an inquest heard.

Jessica Harland passed away after her mother suffered a ‘placental abruption’ moments before the birth.

The infant was ‘more likely’ to have survived if a crew from the North West Ambulance Service had arrived at hospital just 15 minutes earlier, a coroner was told.

A two-day inquest into Jessica’s death was told how paramedics spent several minutes longer at mother Sarah Grimes’ home in Oldham, Greater Manchester than they should have in an emergency case, having missed signs of her life-threatening condition, believing she had ‘stabilised’.

Gary Harland and Sarah Grimes outside Heywood Coroner’s Court after the inquest into the death of their daughter, Jessica Harland

They then made the ‘wrong decision’ not to activate the emergency blue lights on the ambulance, the coroner ruled.

The inquest was told it could have halved the journey time at rush hour.

Coroner Joanne Kearsley told the inquest: ‘Time was critical and nobody can say what would have happened, but on the balance of probabilities, had she been admitted to hospital earlier, the placental abruption would not have occurred and Jessica would have been delivered earlier, meaning she may have survived.’

A midwife at Royal Oldham advised Miss Grimes to phone for the ambulance service, who dispatched a registered paramedic and Emergency Medical Technician (EMT) to her home, on October 12 last year, when Miss Grimes realised she was heavily bleeding, 35 weeks into her fourth pregnancy.

Midwives from the hospital told the hearing, at Rochdale Coroner’s Court in Heywood, that they believed Miss Grimes’ situation was ‘serious’ and anticipated a quick arrival onto the maternity ward.

Meanwhile, paramedic Ian Dean and EMT Gillian Charlesworth took an initial set of observations from Miss Grimes and began to treat the situation as a medical emergency.

The inquest heard that 20 minutes were spent on scene with Miss Grime, twice the recommended time.

Giving evidence, Mr Dean said: ‘We began to take physical observations and there was enough evidence to suggest to me that the patient was suffering from blood loss.

‘I did not recognise what the actual diagnosis was, I wanted to treat her for the effects of blood loss.

‘The plan was to go to hospital with the blue lights on, until I did the second round of observations which showed her condition had stabilised. 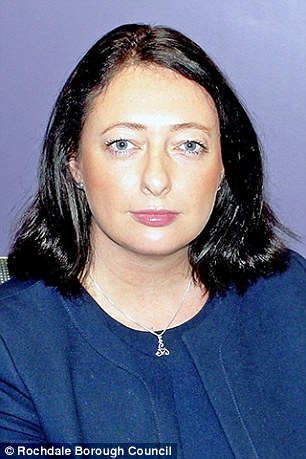 Coroner Joanne Kearsley (pictured) said: ‘The evidence I have heard leads me to find that Sarah should have been at hospital 15 minutes earlier.’

‘At this point she was sitting up and talking to me and I thought I might have been wrong about her suffering from blood loss.’

Mr Dean admitted that at no point did he ever ask Miss Grimes’ whether or not she was still bleeding.

A subsequent decision was made by both paramedics not to use the emergency blue lights during rush hour traffic, which research says could have halved the journey time, the inquest heard.

Mr Dean said: ‘I was with Miss Grimes in the vehicle on route to hospital and we had a normal conversation. The whole journey was unremarkable.

‘At no point did I realise she was having a placental abruption.’

Medical professionals from Royal Oldham Hospital reported ‘no sense of urgency’ from either paramedic as they arrived, almost half an hour after leaving Miss Grimes’ home.

Upon arrival, Miss Grimes was rushed to theatre where baby Jessica was delivered by an emergency Caesarean in a matter of minutes.

Doctors told the hearing that Jessica was born in a ‘very poor’ condition and was immediately transferred to the neonatal unit at Royal Oldham Hospital.

Despite extensive efforts to resuscitate her, Jessica was sadly pronounced dead approximately one hour later.

A post-mortem examination revealed she died as a result of hypoxia and acute blood loss due to a placental abruption.

This occurs when the placenta separates early from the uterus and can be very dangerous to both mother and baby.

Neonatologist consultant Professor Simon Mitchell told the hearing that if Jessica had been delivered earlier, the abruption may have been avoided.

Prof Mitchell said: ‘The placental abruption happened very close to the delivery of the baby and early delivery would have avoided that.

‘If Jessica could have been delivered 15 minutes earlier I believe she would have been born in a better condition and more likely to have survived.’ 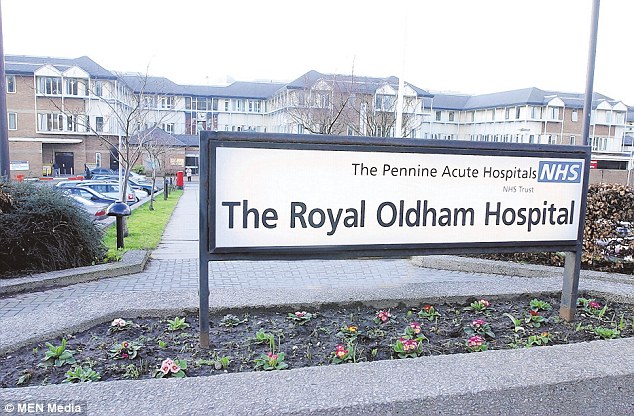 Upon arrival, Miss Grimes was rushed to theatre where baby Jessica was delivered by an emergency Caesarean in a matter of minutes

An internal investigation conducted by North West Ambulance Service concluded that both paramedics failed to do an adequate examination and assessment of Miss Grimes and missed key features that identified signs of a life-threatening condition, which lead to a delay in definitive care.

Recording a narrative conclusion, Coroner Joanne Kearsley said: ‘The evidence I have heard leads me to find that Sarah should have been at hospital 15 minutes earlier.’

She added: ‘It is clear that Miss Grimes needed urgent medical assistance, and the care afforded to her was not of an acceptable standard.

‘Transport to the hospital should have been taken with blue lights and the wrong decision was taken.

‘Upon arrival at the hospital it was noted by doctors and midwives that there was no degree of urgency displayed by both paramedics.’

Following the hearing, a spokesperson for North West Ambulance Service said: ‘The trust would like to express its sincere condolences to Jessica’s family for their very sad loss, we appreciate this must be a difficult time for them.

‘The trust strives to provide the very best of care to all of our patients and we acknowledge that on this occasion, this was sadly not the case.

‘The trust’s own internal review into this incident identified that there were failings but we have already implemented extensive measures, such as improvements to training, to ensure better future care for patients.

‘The improvements made by NWAS and the reasons for doing so, are being shared with other ambulance services nationally to ensure improved care throughout the country.’