The mother of the premature baby girl cradled by the Princess of Wales revealed little Bianca gave her a surprise as she arrived five weeks early.

Sylvia Novak, who recently gave birth at the Royal Surrey County Hospital, told mother-of-three Kate, 40, she had gone into labour at just over 34 weeks pregnant.

A video shows the two mothers sitting down together in the maternity ward of the hospital, before the Princess of Wales takes baby Bianca into her arms and cradles her.

As Her Royal Highness shakes Sylvia’s hand, the new mother tells Kate: ‘I can’t stand up.’

As the pair sit down to chat, Sylvia, who is holding her baby on her chest, tells Kate: ‘[Bianca] was born at 34 weeks and two days.

The Princess of Wales looked lovingly at a newborn baby girl, Bianca, at the Royal Surrey County Hospital’s maternity unit in Guildford 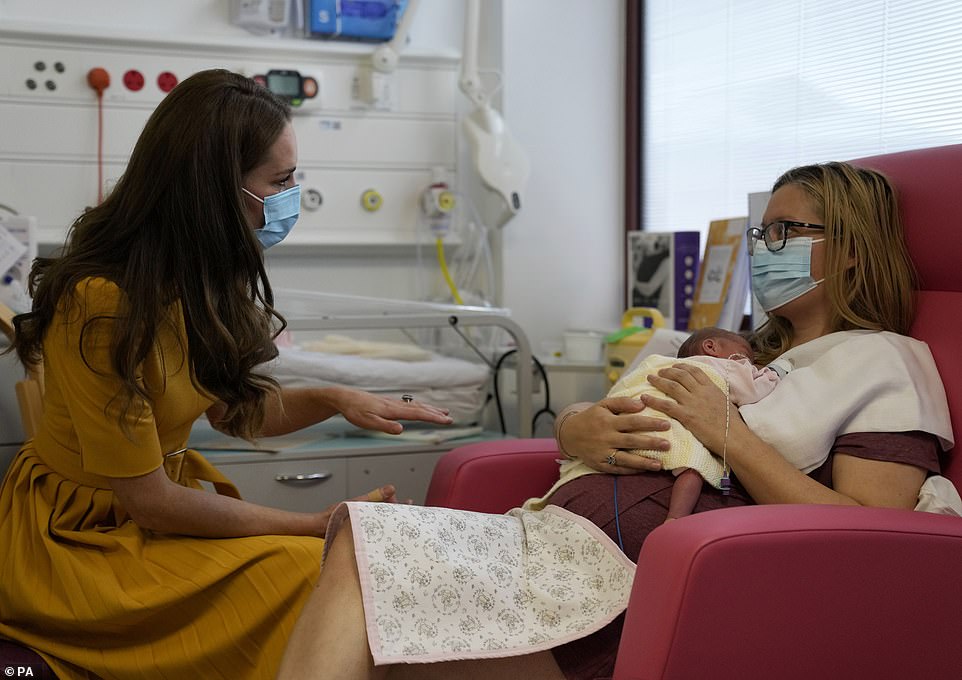 Her Royal Highness supported the baby’s head as she spoke to her mother, Sylvia Novak, who had recently given birth to her baby daughter in the unit 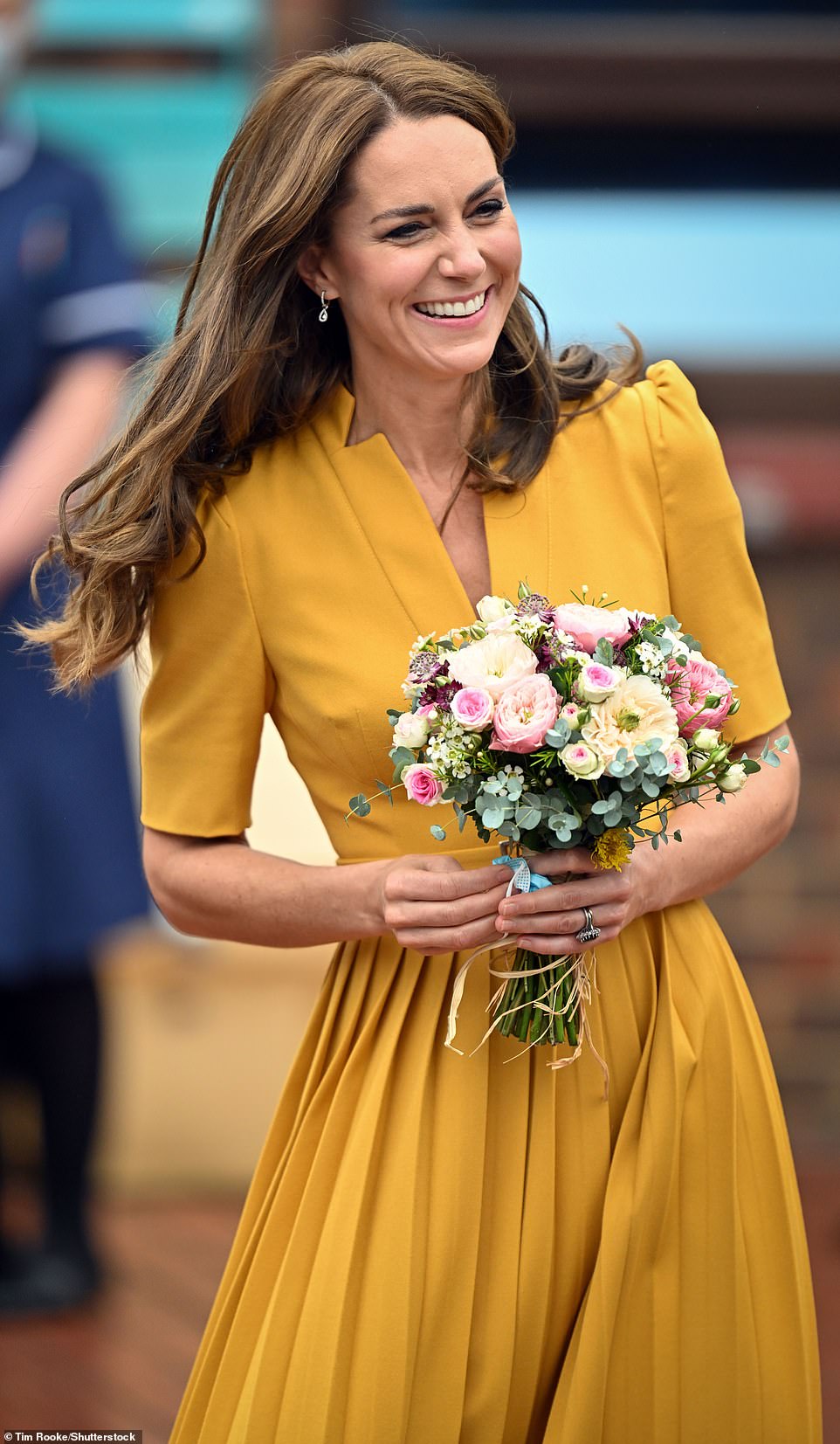 Masked up! The Princess of Wales stuck to Covid regulations at the maternity unit of the Royal Surrey County Hospital this afternoon on her official visit

The Princess is then pictured cradling Bianca in her arms and supporting her head, while stroking the baby’s hair with her fingers.

As Her Royal Highness prepares to leave, she tells Sylvia: ‘I’ll leave you in peace.’

The Princess of Wales looked stunning in yellow on Wednesday as she visited an award-winning maternity unit at a hospital in Surrey in her first solo royal public engagement since assuming her new title.

During her visit to the maternity unit of the Guildford hospital, Kate looked radiant in a mustard £220 Karen Millen dress while she met with staff and learnt more about the support the unit provides to pregnant women and new mothers.

Her Royal Highness accessorised the bright yellow dress, which had echoes of summer, with contrasting navy suede court stilettos and a navy clutch bag.

Her brunette locks, worn in curls and tucked behind one ear, bounced in the breeze as she strolled up to the entrance of the hospital. She was also spotted wearing a face mask inside the hospital corridors, in line with covid regulations.

The Princess wore simple and understated white gold hoops with a teardrop and opted for just a touch of make-up with a neutral lip shade and minimal eyeshadow. 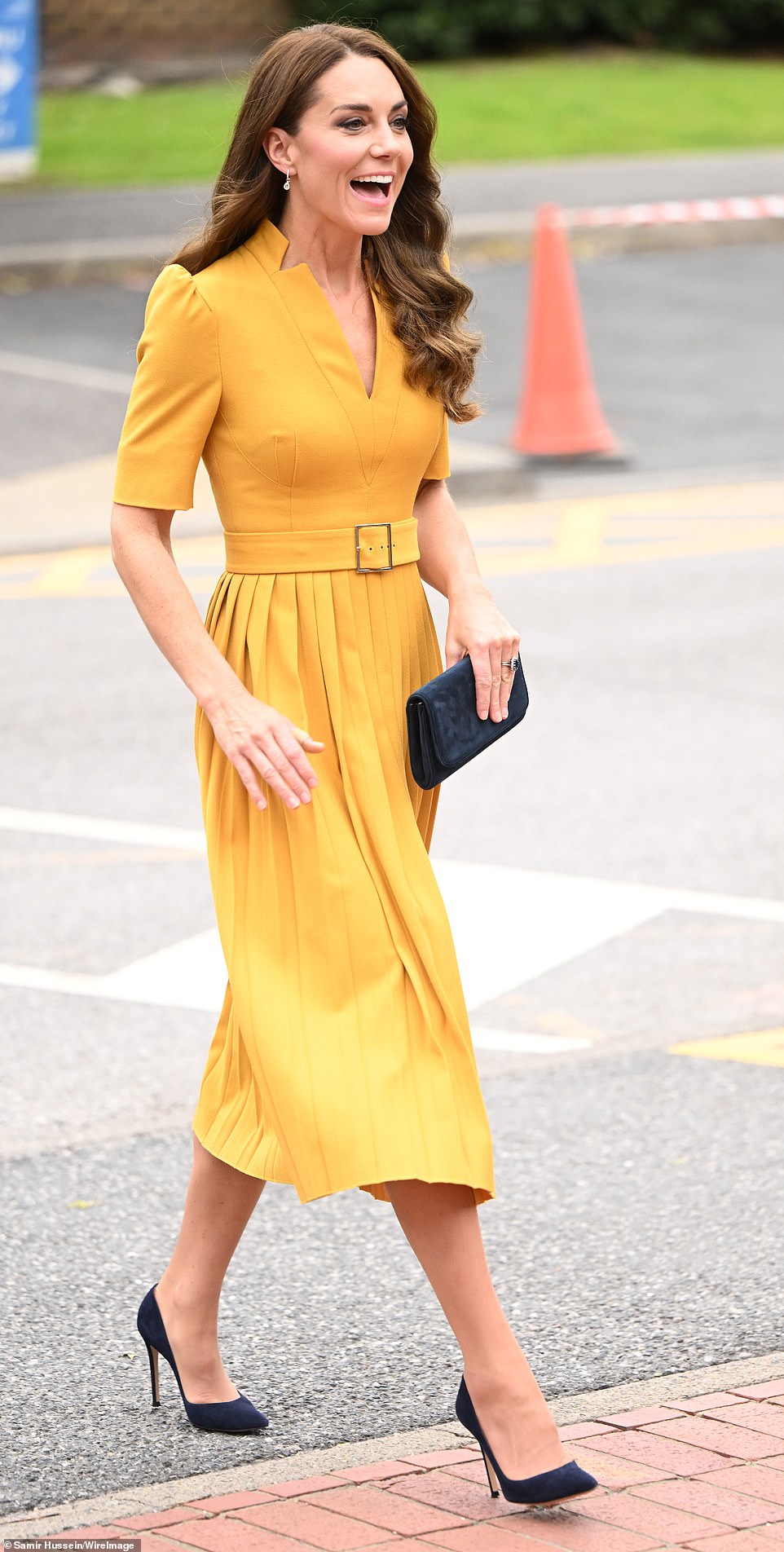 The Princess of Wales, 40, looked radiant in a mustard £220 Karen Millen dress an as she arrived at the maternity unit in Surrey this afternoon 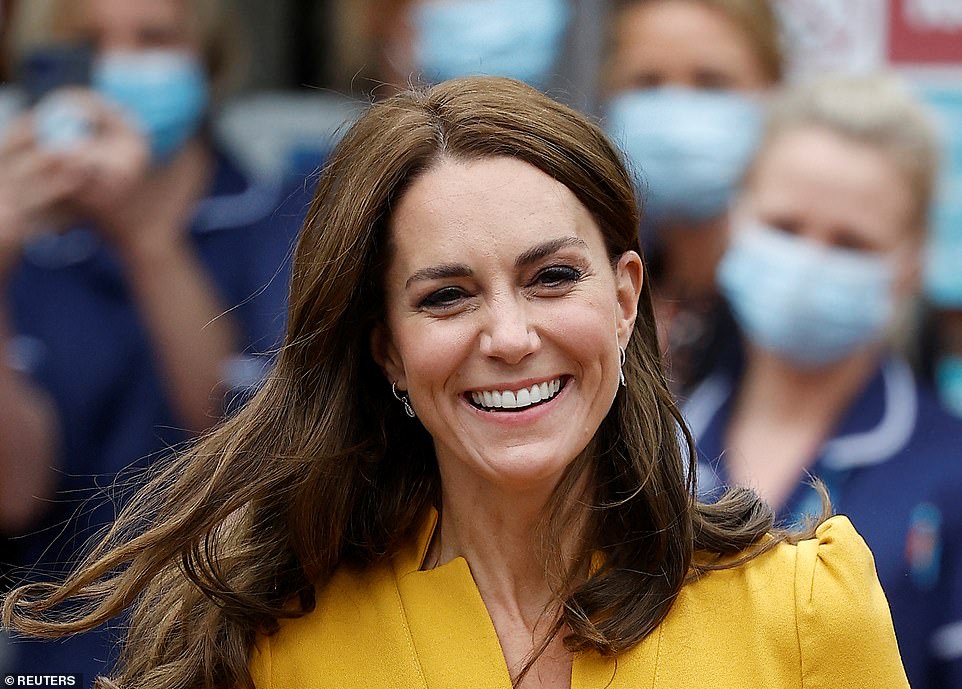 Once it was safe to whip off her face mask, The Princess beamed for the cameras upon her departure from the maternity unit, where she had visited staff and mothers 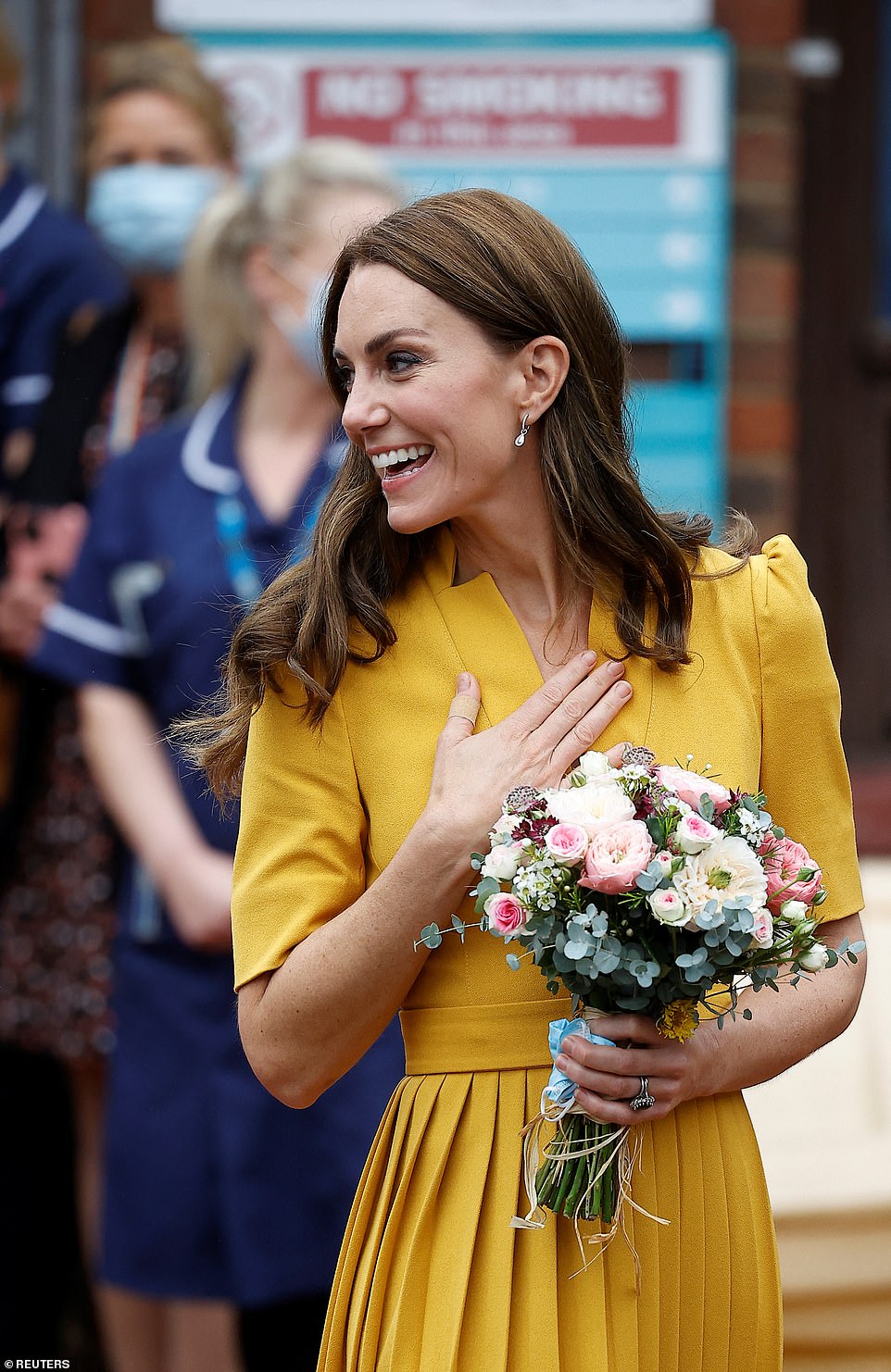 The Princess carried a posy of flowers which included eucalyptus and roses, and had been tied together with a rustic straw fastening 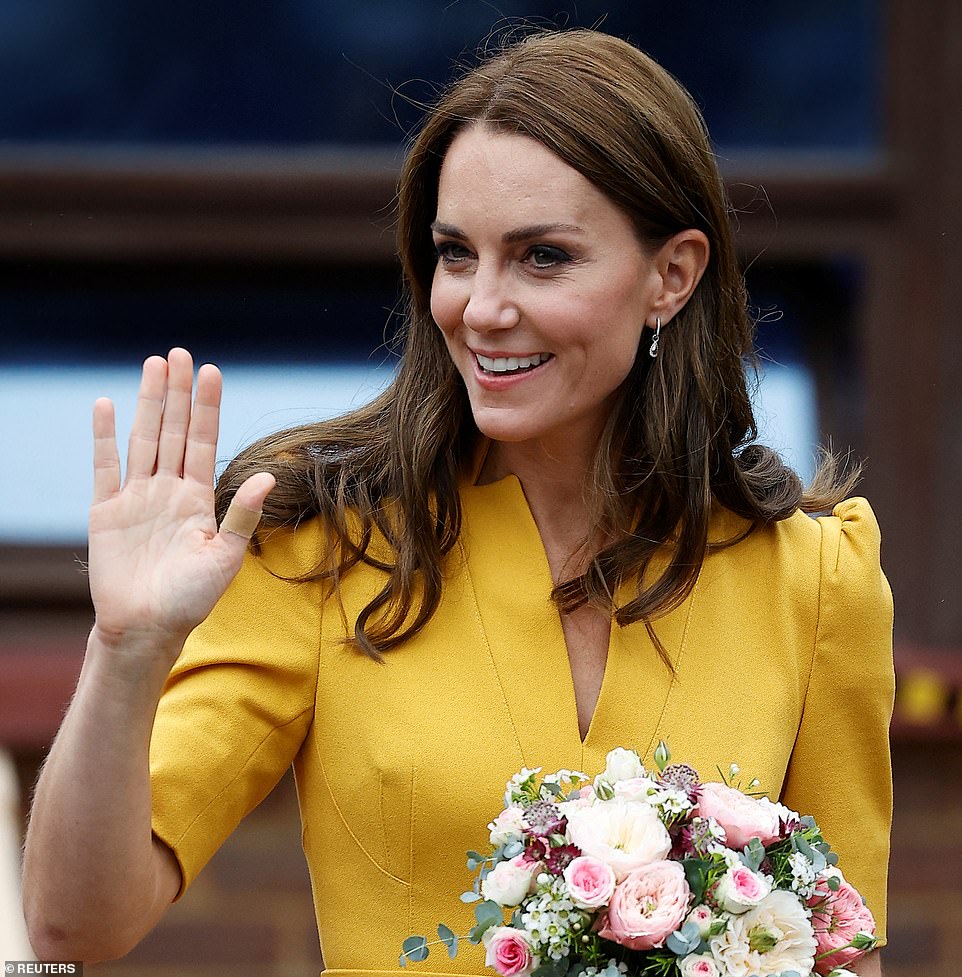 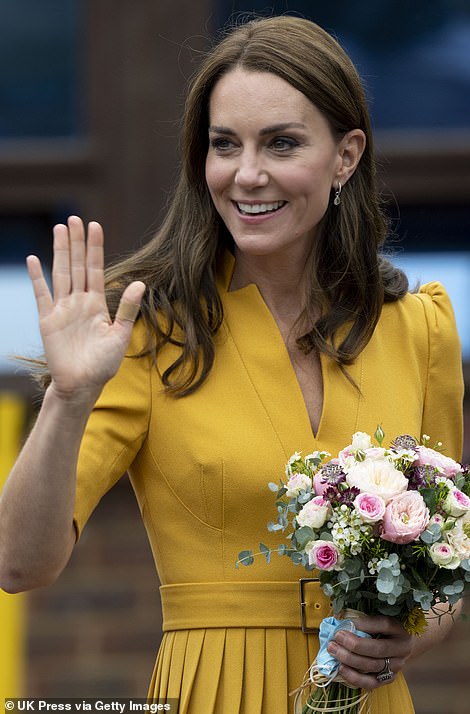 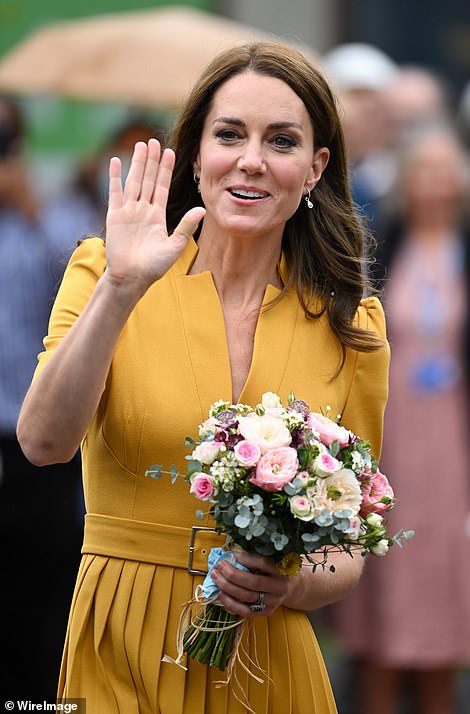 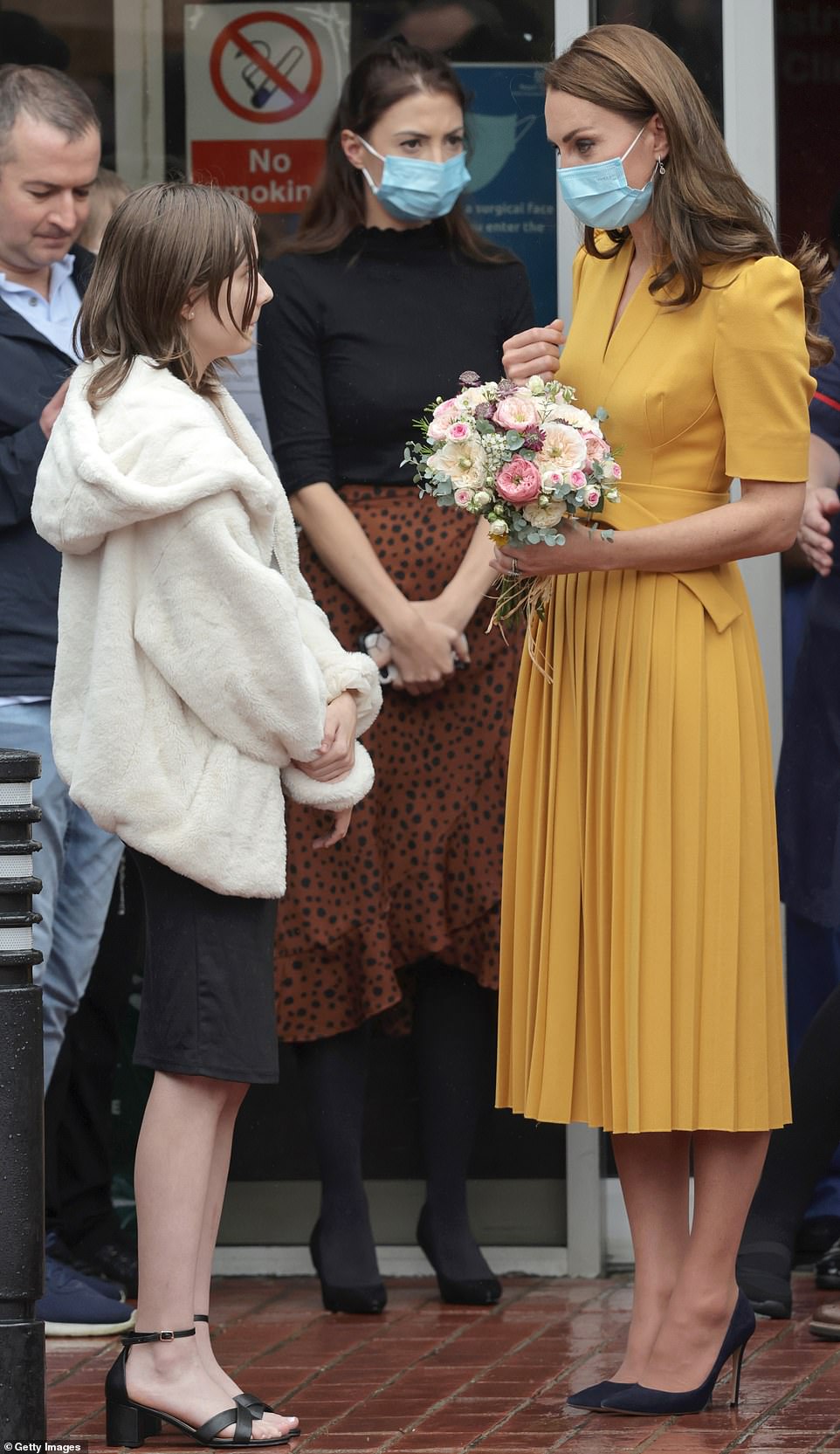 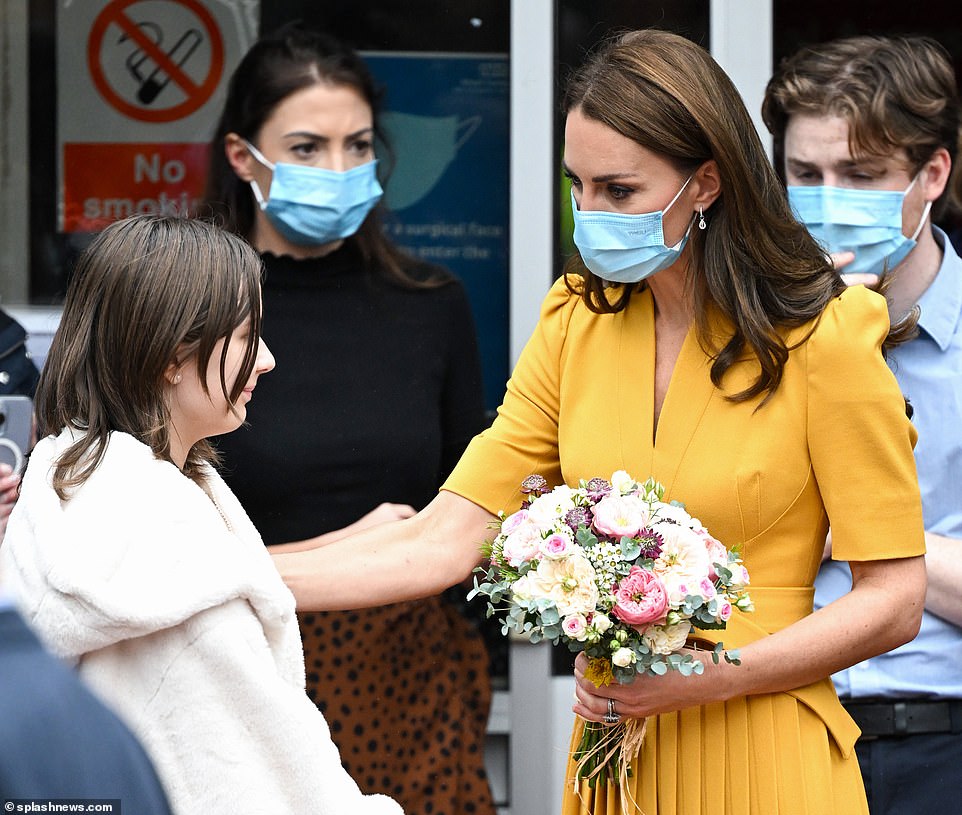 The young girl coyly smiled at the Princess as she reached out to put her hand on the well-wisher’s arm, while still wearing her covid face mask and carrying flowers 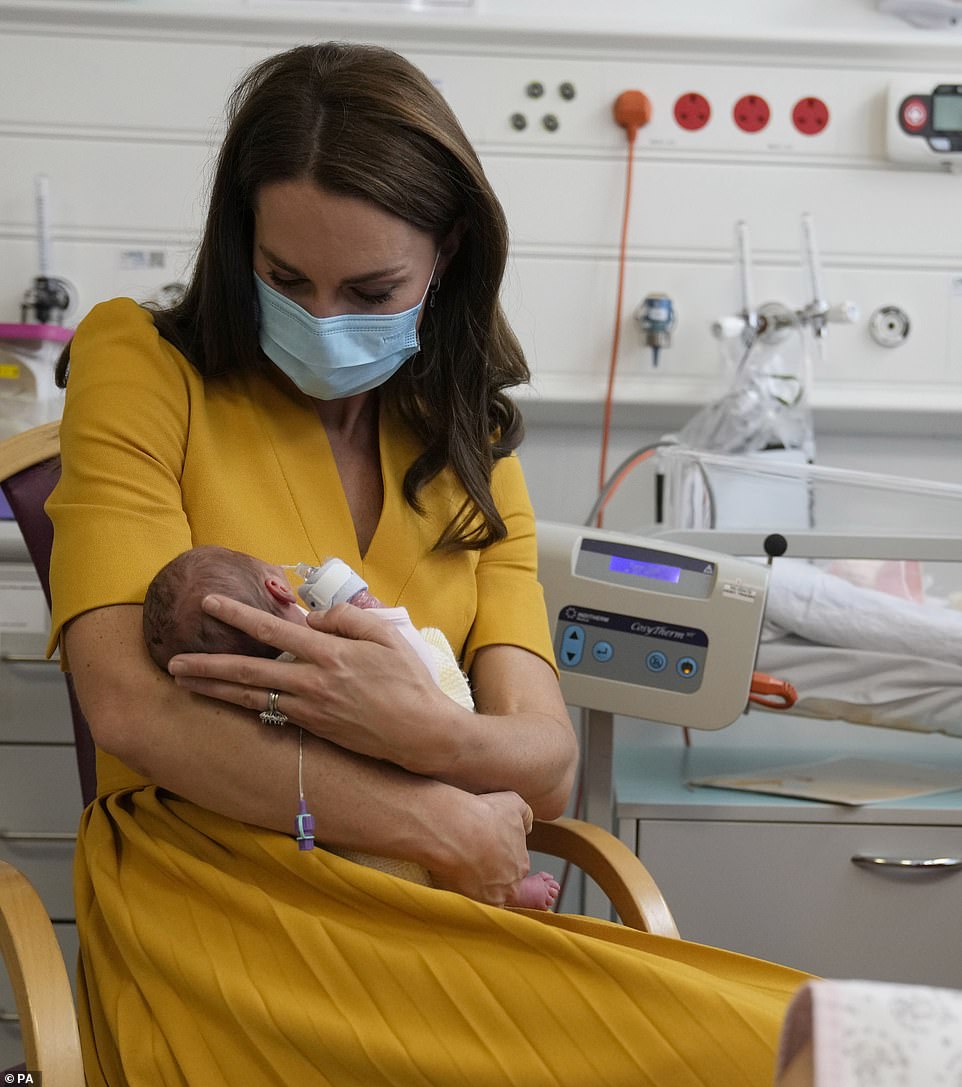 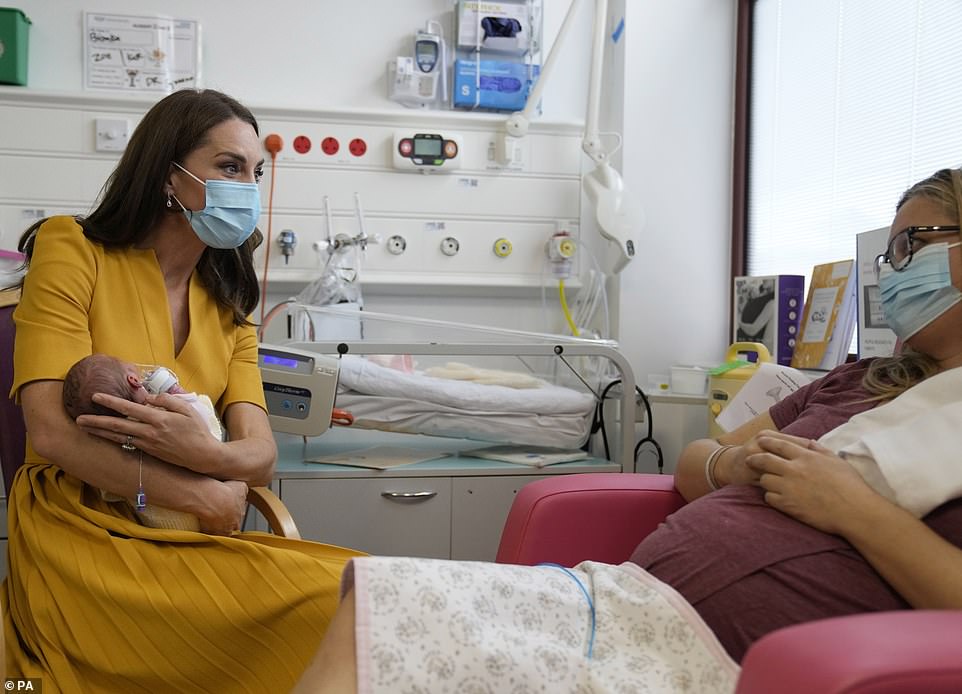 Kate wore a Covid-19 facemask as she chatted to Bianca’s mother, who has recently given birth in the maternity unit at the Surrey hospital 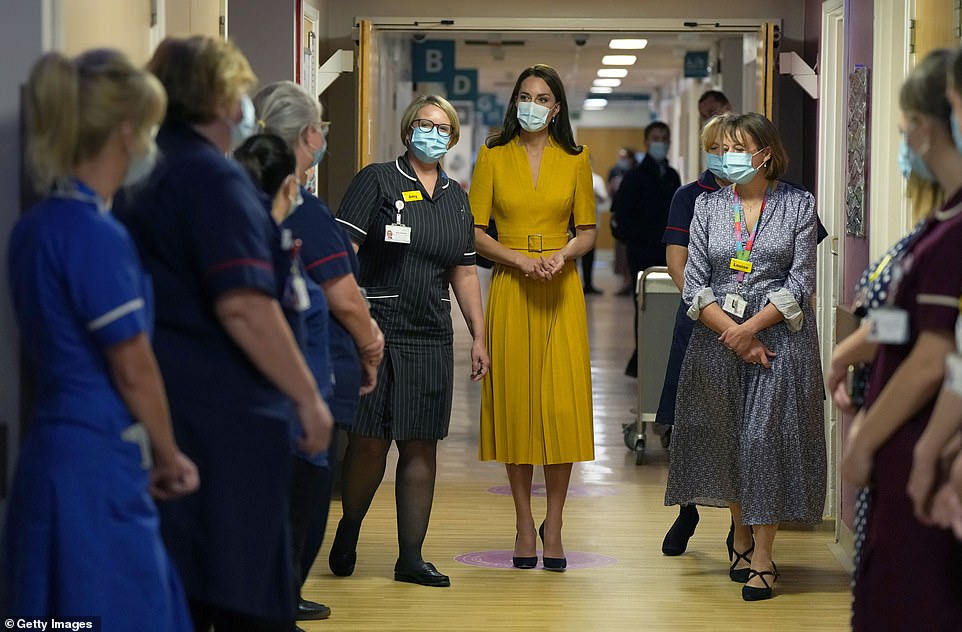 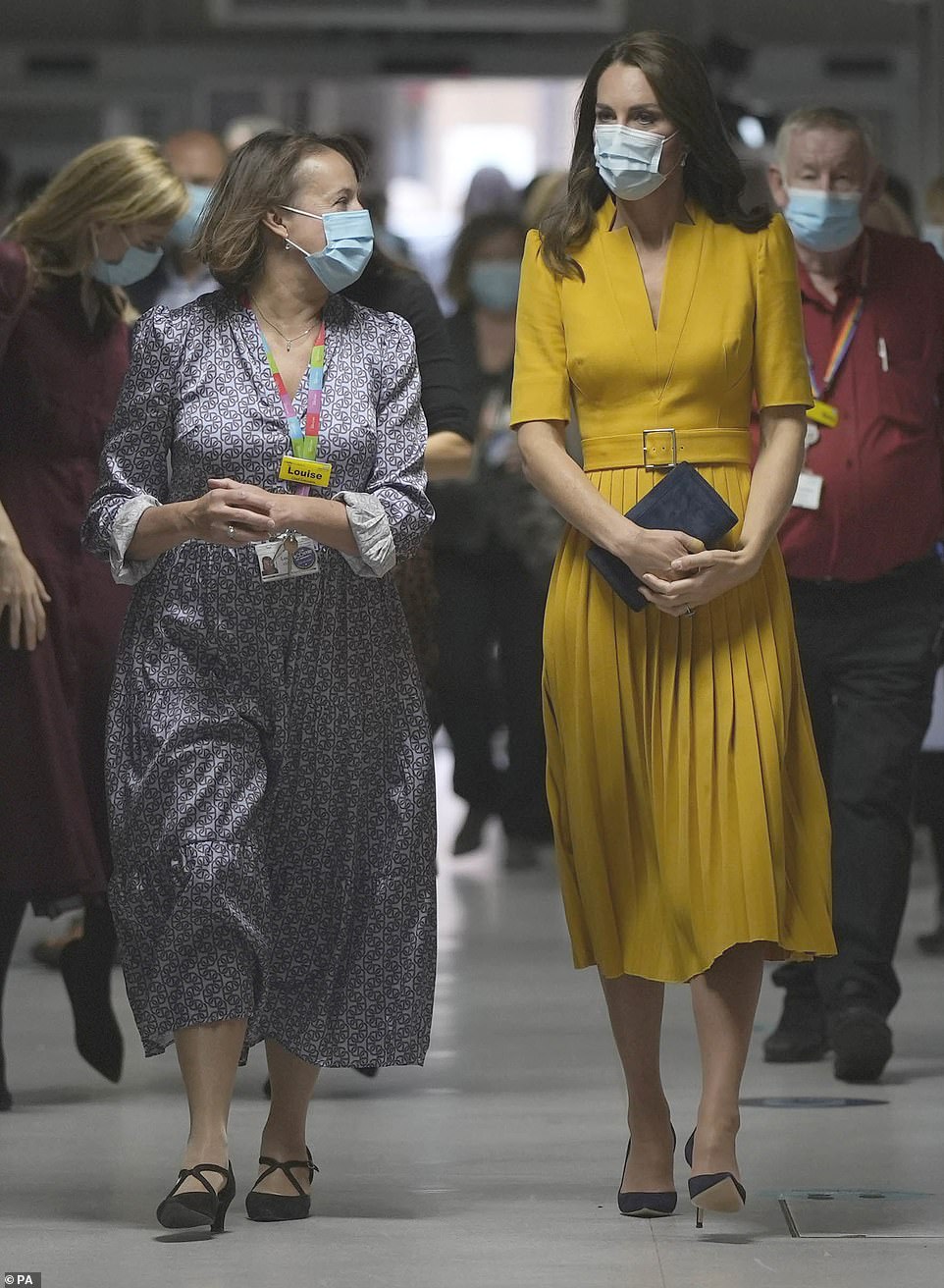 The Princess of Wales walked along the corridor of the hospital’s award-winning maternity unit while wearing a mask in line with Covid regulations, which are still in place in some hospital trusts 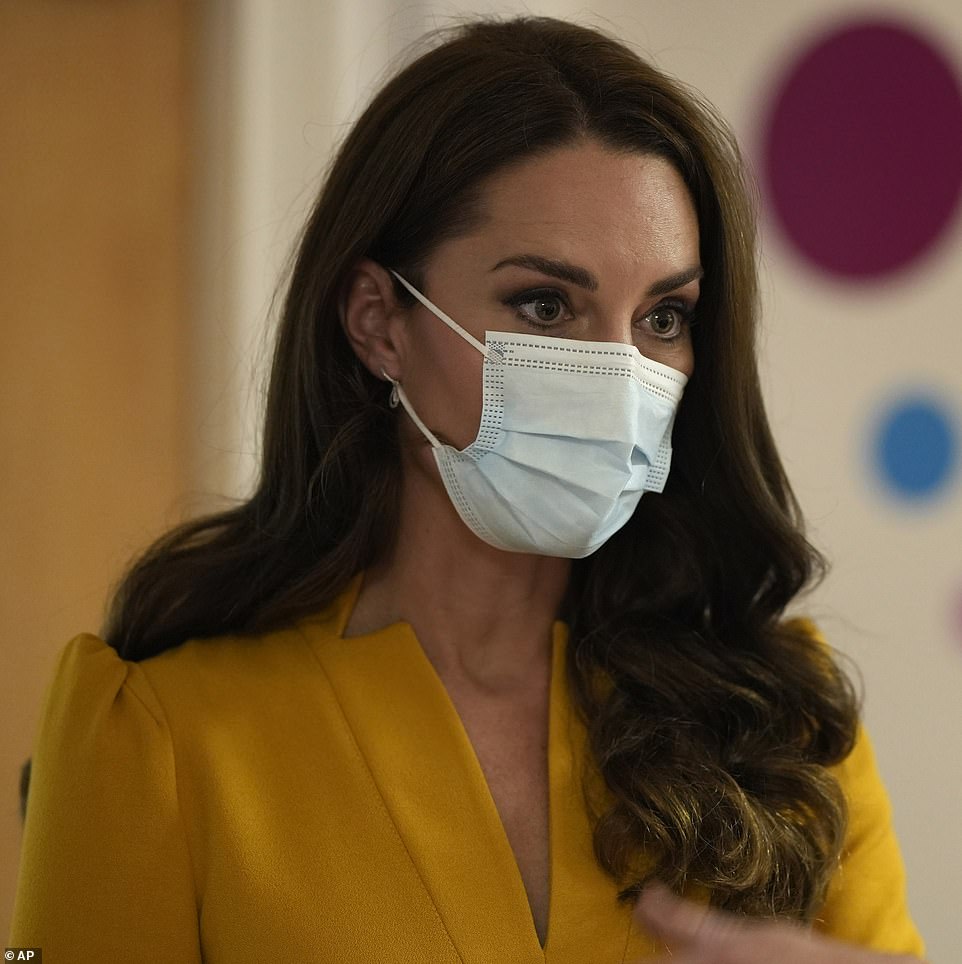 Harking back to the days of the Covid-19 pandemic, the Princess of Wales donned her face mask to prevent the spread of the virus 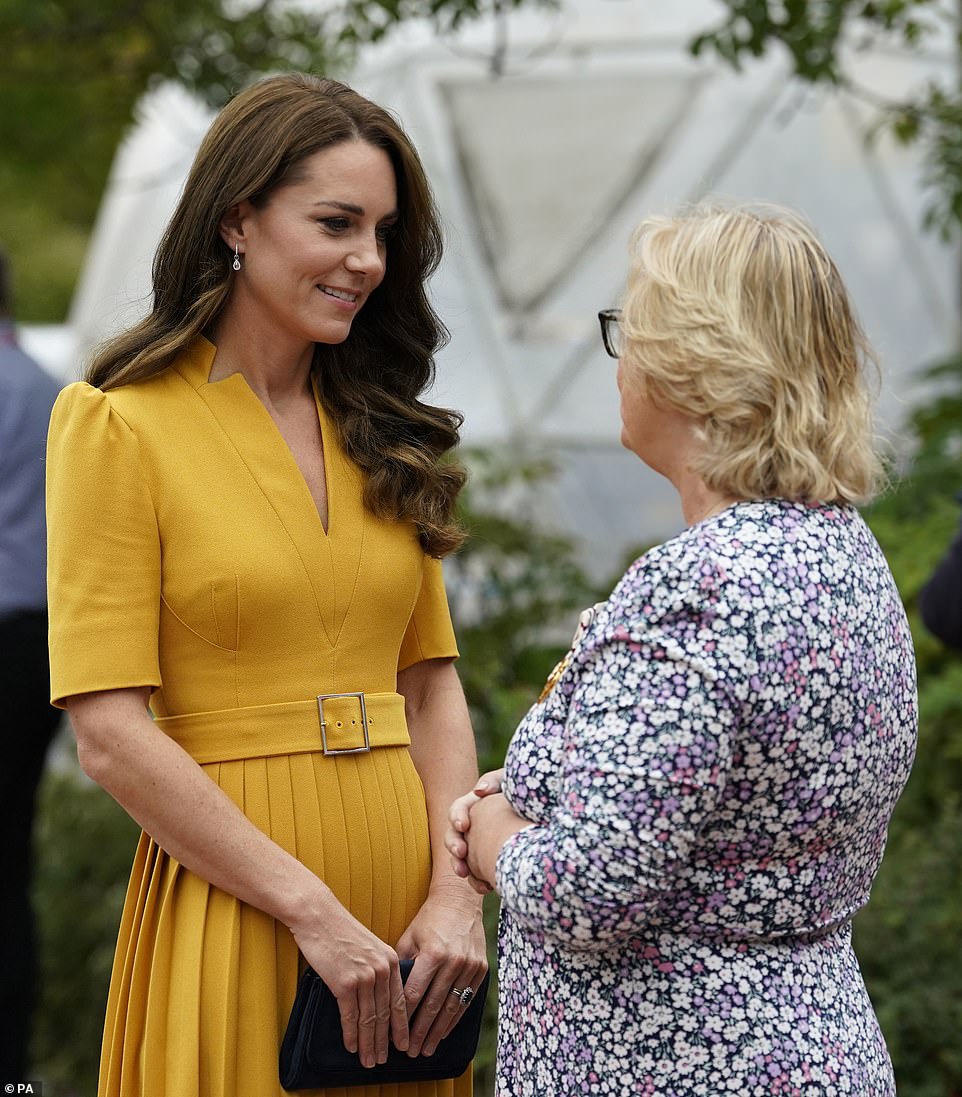 Her Royal Highness looked professional and regal as ever as she chatted with a member of staff at the hospital in Guildford, which has won an award for its maternity care 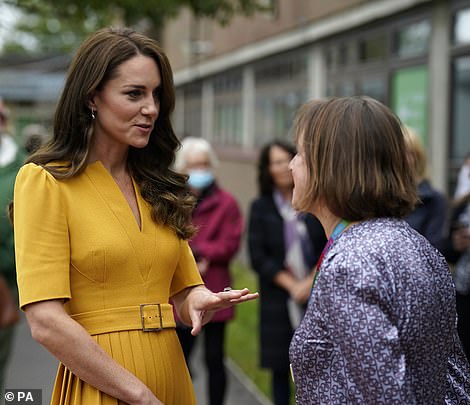 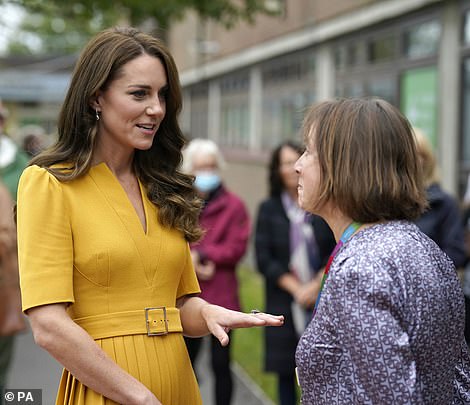 The maternity unit, which cares for around 3,000 babies every year, received a UNICEF Baby Friendly Initiative Gold Award in May for its outstanding work supporting infant-feeding and parent-infant relationships.

This is a solo trip for Her Royal Highness as her husband Prince William carries out his own duties today – meeting young footballers at a training session at St George’s Park.

Kate and Prince William were made Prince and Princess of Wales by King Charles III on September 9, a title reserved for the heir apparent of the monarch.

The Princess met staff from the unit’s Jasmine Team, which helps women affected by mental illness during pre and post-natal periods – something that one in five women in the UK are affected by. 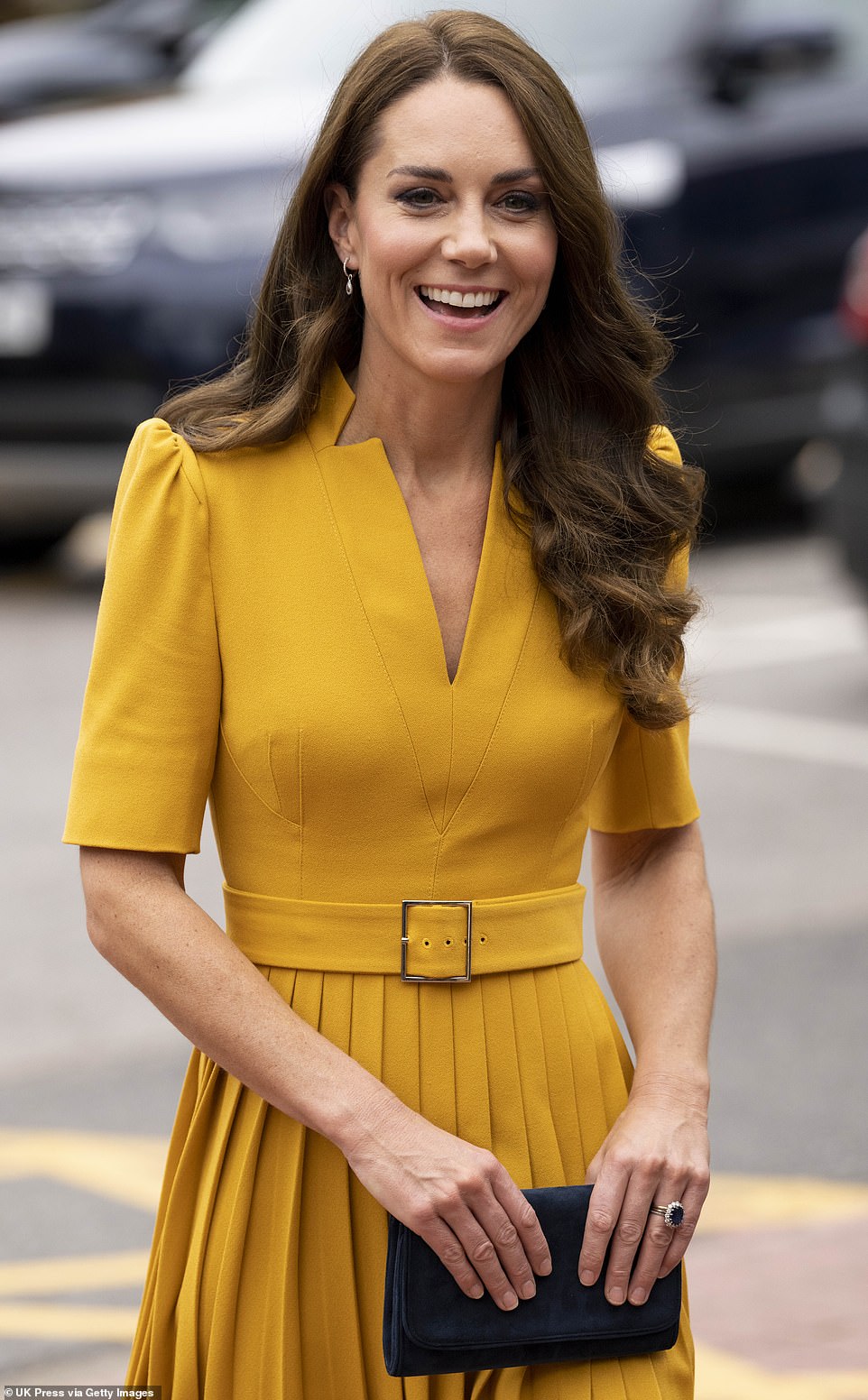 Kate’s dress, belted at the middle, was a bright, summery flash of colour on a dreary autumn day as she arrived at the unit in the Royal Surrey County Hospital 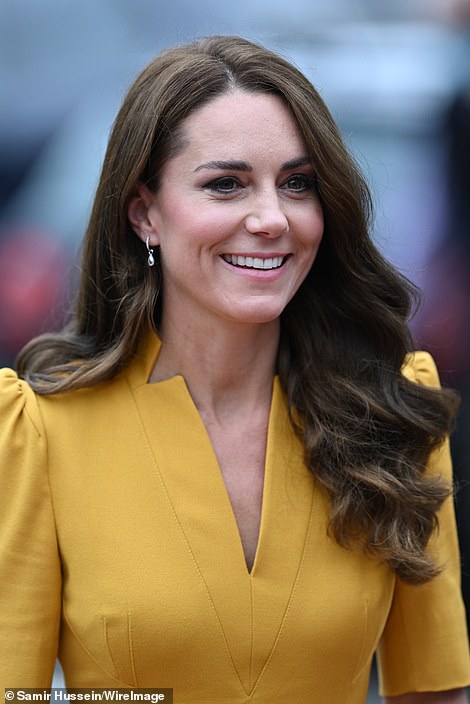 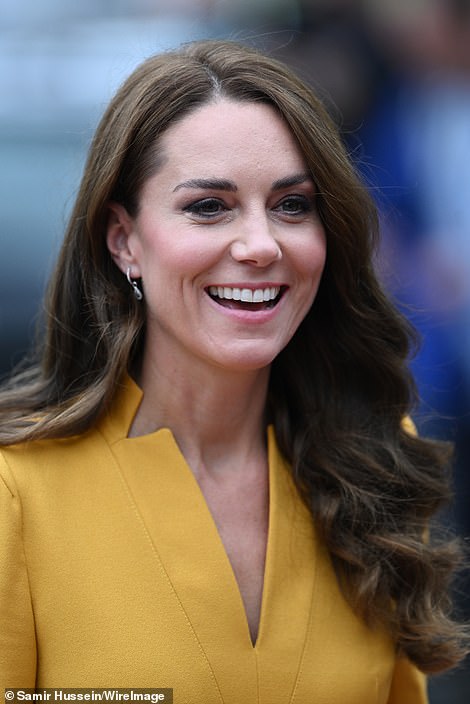 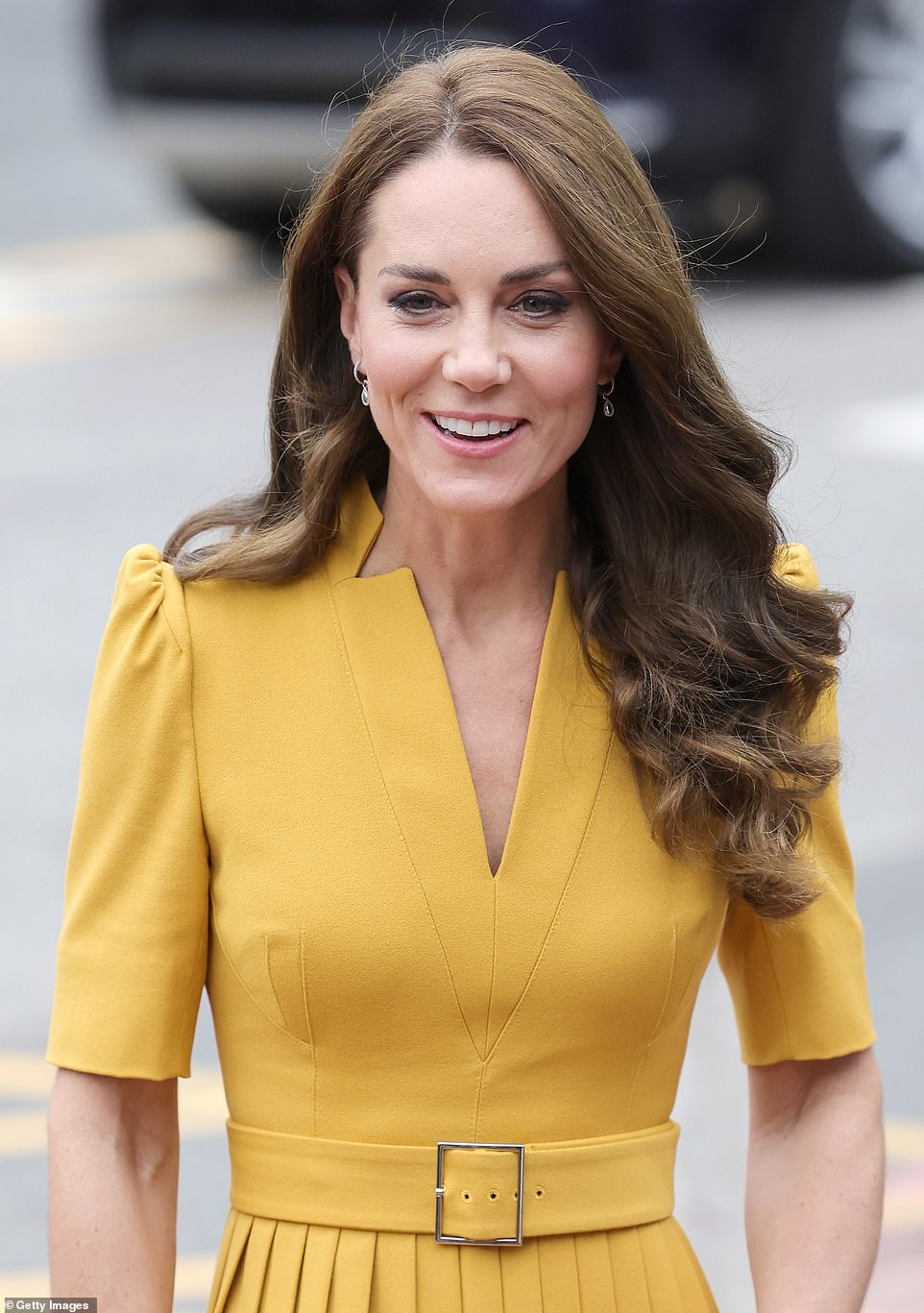 As patron of the Maternal Mental Health Alliance, the Princess will learn how teams at the hospital are supporting new and expectant mothers 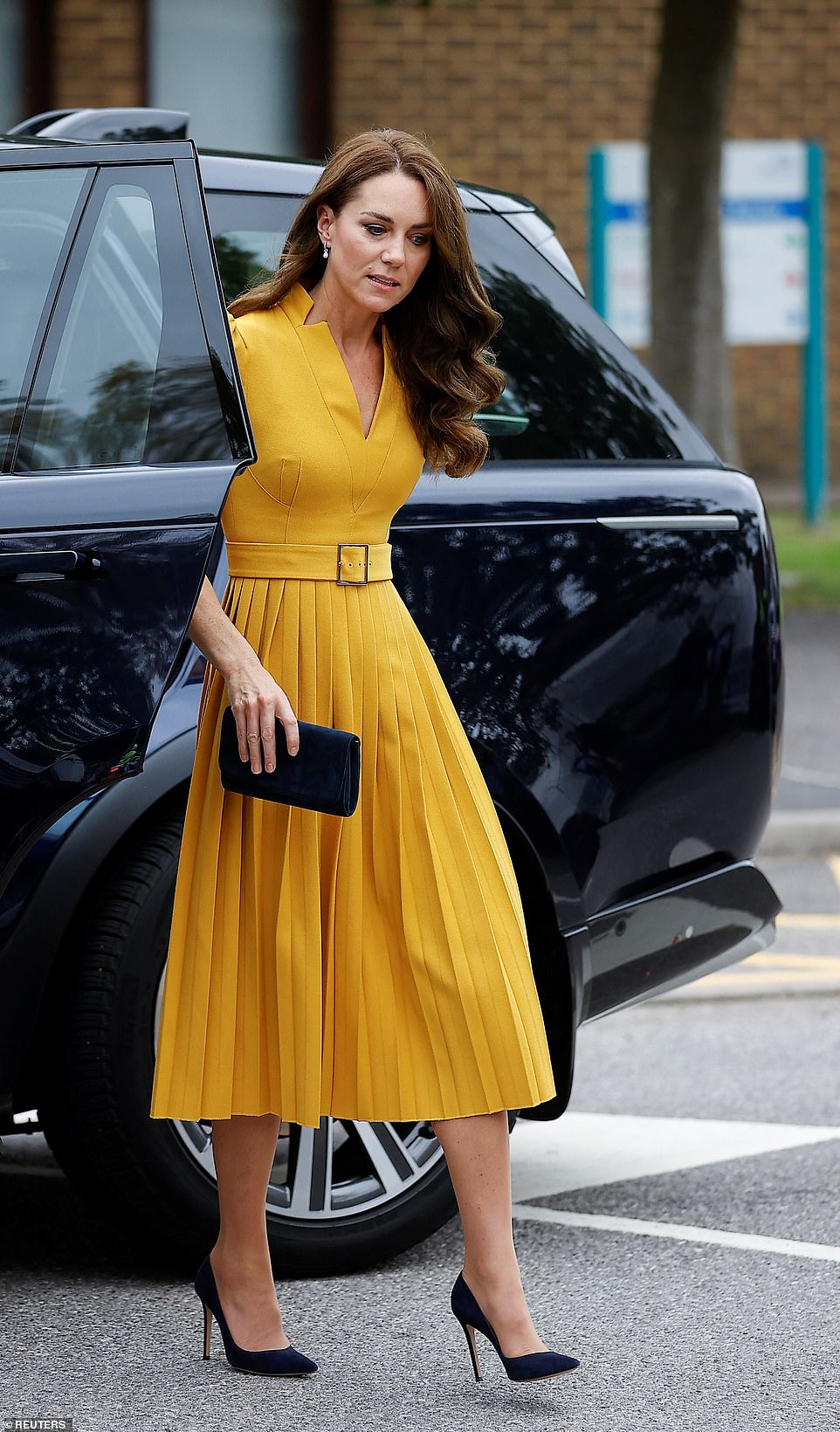 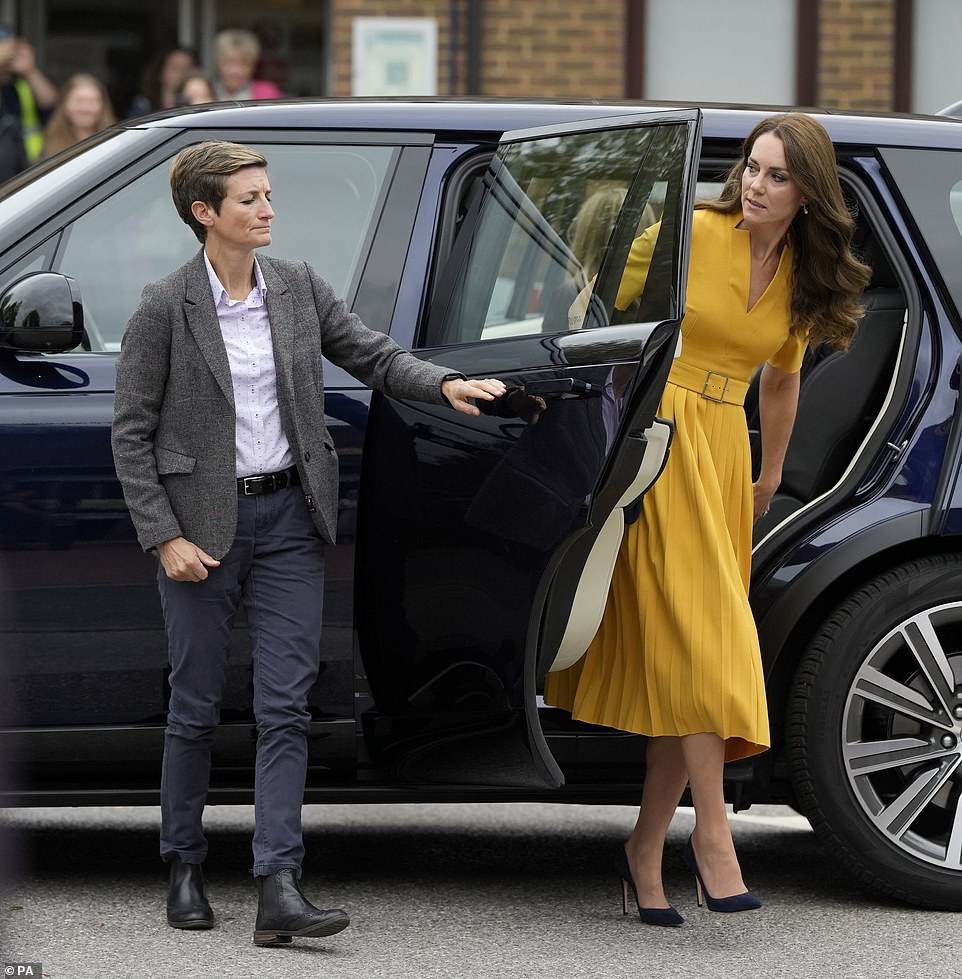 One of the more sensitive parts of the Princess’s visit was to the Special Care Baby Unit (SCBU), which cares for premature babies and supports their families. She also met with a family whose child was cared for in the unit.

A hospital spokesman said: ‘The SCBU is one of only a few units nationally which has the ability for mothers to remain close to their babies at all times through the provision of around-the-clock cot side sleeping facilities.

‘Staff also encourage parents to take part in the care of their child as much as possible, including bathing, feeding and nappy changing. Evidence demonstrates that the ability for families to develop close and loving relationships at this early stage in their journey is essential for maternal well-being and the long-term physical, cognitive, social and emotional development of their baby.’

At the unit’s postnatal bay, the Princess heard how staff had implemented a pioneering model of care at the hospital by working to ensure that as many mothers as possible received continuity of care during pregnancy and childbirth.

The spokesman added: ‘Being supported by the same team of midwives throughout their journey allows mothers to build positive and trusting relationships with their caregivers, which is particularly important for women from vulnerable backgrounds or with mental health needs.’

Following the visit, the Princess of Wales used her joint Instagram account with her husband to praise the unit.

Posting a photo of herself cradling baby Bianca, she wrote: ‘With a focus on maternal mental health, alongside pioneering overnight facilities, Royal Surrey County Hospital ensures women and their families feel safe, supported and have the best chance of developing those all-important early attachments which are so crucial to ensuring their babies grow and thrive.

‘It was lovely to meet some of the new mothers and their babies who are supported by such a brilliant team at the hospital.’

Last week, Kate made her first appearance since the Queen’s funeral alongside her husband Prince William as they visited Anglesey for a whirlwind visit of the nation.