Researchers may have discovered a nursery of hammerhead sharks off the coast of Florida, which if confirmed, would be the first ever identified in that part of the planet.

Experts have found that a small section of Biscayne Bay, a lagoon on the Atlantic coast of South Florida, may be a region where the endangered sharks give birth and where they spend many of their formative years. 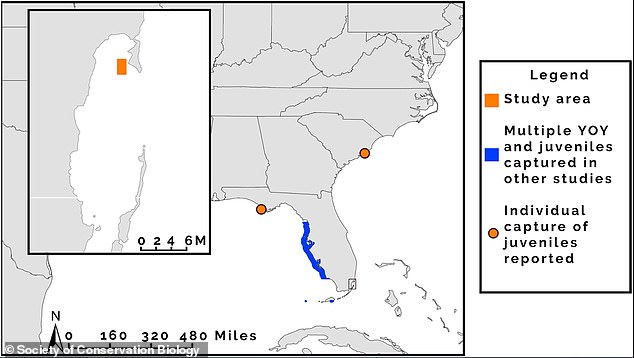 Experts have found that a small section of Biscayne Bay (inset), a lagoon on the Atlantic coast of South Florida, may be a region where the endangered sharks give birth and where they spend many of their formative years

‘We report the first identification of a probable nursery area for young-of-the-year and juvenile great hammerheads off the Atlantic coast of the United States. Notably, these animals were all encountered within highly human-impacted marine habitats near Miami, Florida,’ the authors wrote in the study.

‘The capture of nine individuals under 200 cm (79 inches) total length in a 10-month period supports the hypothesis that this area represents a primary or secondary nursery habitat for great hammerheads.’

In June 2018, researchers caught the first juvenile great hammerhead near the lagoon. Until January 2020, nine great hammerheads were caught, tagged and released in total, one every few months over a span of 80 total fishing days.

‘We were doing research on another species in Biscayne Bay, and just happened to catch a juvenile hammerhead,’ the study’s lead author, Catherine Macdonald, said in a recent interview with the Associated Press. 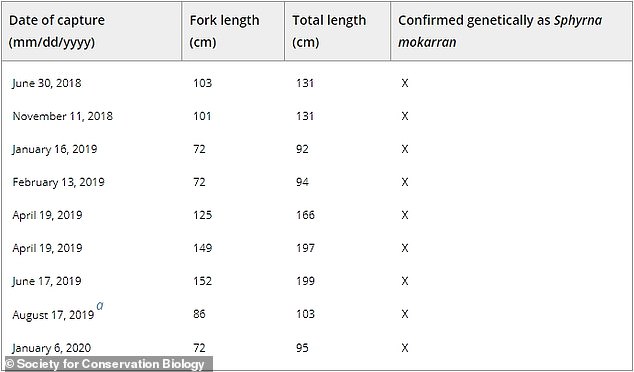 Nine great hammerheads were caught, tagged and released in total, all under 200 cm, between June 2018 and January 2020

Biscayne Bay is a ‘large, shallow’ area with seagrass beds and coral reefs that support ‘considerable biodiversity,’ the researchers wrote in the study, adding that it’s likely the habitat could provide them with protection and considerable amounts of prey. 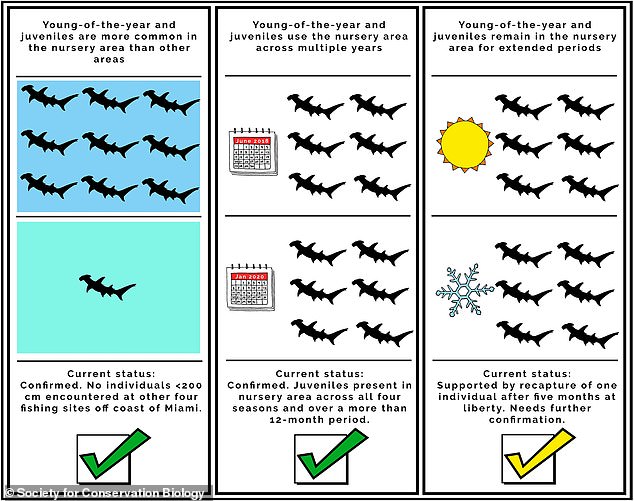 Three components are needed to call the area a nursery: more juveniles there than other areas; if the juveniles were there for a lengthy period of time; and if they were still present after a year

The researchers needed three components to call the area a nursery: more juveniles there than other areas; if the juveniles were there for a lengthy period of time, and if they were still present after a year.

According to Oceana.org, hammerheads breed once every two years, doing so via internal fertilization.

Great hammerheads have a faster growth rate than other hammerheads and reach maturity between 5 and 9 years of age.

They can live up to 44 years and possibly longer, the organization added.

Great hammerheads, which can reach slightly more than 13 feet in length and weigh up to 500 pounds, are listed as ‘critically endangered,’ according to the International Union for the Conservation of Nature.

Hammerheads prey on rays, which are somewhat prevalent in Biscayne Bay. They also prey on other sharks, such as black-tips. 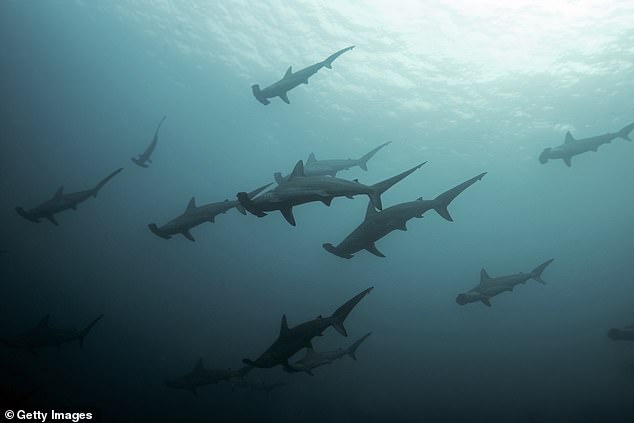 Little is known about nursery areas for great hammerheads, although some have been tentatively identified on the Gulf Coast of Florida based on reported catches of juveniles, and larger juvenile individuals have been captured around the Florida Keys.

The study was published last month in Conservation Science and Practice.

Hammerheads, including scalloped and great hammerheads, were found to be most active during the night, peaking around 10 p.m. and 2 a.m., respectively.

As a new study sheds light on the hunting and feeding behavior of sharks, including the dangerous bull shark, these apex predators have long terrified and fascinated humans at the same time.

Their basic design has never really changed over the course of 200  million years and they are considered to be complex and intelligent.

Bull sharks, commonly found in warm waters, are likely responsible for the majority of near-shore shark attacks, including biting other species.