A baby who was born four months premature and weighed less than a bag of sugar has defied the odds to survive.

Murphy Russell was given just a 50 per cent chance of survival after he arrived by emergency C-section on January 24.

After being rushed to intensive care, his parents Joanne, 33, and Richard Russell, 34, were forced to look at their son through an incubator while he battled a low heart rate and a bleed on the brain.

After a 14-week stay in hospital, Murphy finally went home to Oakenshaw, near Bradford, a month ago.

The youngster still requires oxygen 24/7, with doctors warning Murphy, who suffers from chronic lung disease, may have cerebral palsy.

Joanne Russell is pictured with her four-month-old son Murphy. The youngster was born at just 24 weeks on January 24, weighing 1lb 11oz – less than a bag of sugar. After defying the 50/50 odds to survive, Murphy still requires oxygen 24/7 and has chronic lung disease 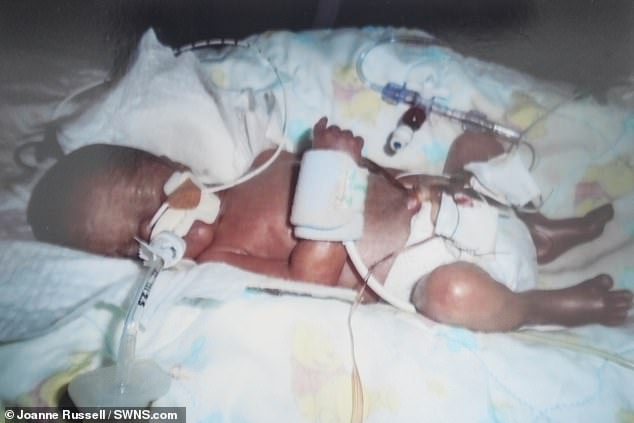 Murphy is pictured in an incubator in neonatal intensive care during his 14-week stay in hospital. His parents could not even touch him due to his skin being so sensitive

Mrs Russell, a cleaner, worried she may never be a mother after she suffered a miscarriage while eight-weeks pregnant in 2017.

The mother-of-one also has to take medication every day to control her rheumatoid arthritis, which can affect fertility.

However, the couple conceived in August last year, with Mrs Russell having a healthy pregnancy for the first five months.

But things took a dramatic turn for the worse when she went into labour in January, despite her due date being May 12.

‘I had been working the day before and then felt like I had trapped wind,’ Mrs Russell said.

‘It got worse and worse, and I ended up phoning the ambulance, they said I was 5cm dilated.

‘Going from no signs at all to giving birth was unbelievable. It’s difficult to put into words, it was just blind panic.’

Mrs Russell’s traumatic birth lasted around 13 hours. Speaking of labour, she said: ‘I was bleeding and bleeding.’

When Murphy arrived, he was immediately taken to neonatal intensive care. ‘You get a quick look at the baby and they’re rushed off’, Mrs Russell said.

‘I did see other babies being brought down and it’s so traumatic. You don’t know what to do.’

The newborn was initially put in a plastic bag. This is due to premature babies losing water easily through their thin skin. Wrapping an infant in a plastic bag and then blankets helps to keep them warm.

Once he was moved to an incubator, his parents were forced to look at Murphy through an incubator, with his skin being too delicate to touch.

‘Even the doctors don’t really know what is going to happen,’ Mrs Russell said.

After 10 weeks in an incubator, Murphy was moved to a heated cot, before finally being allowed home. 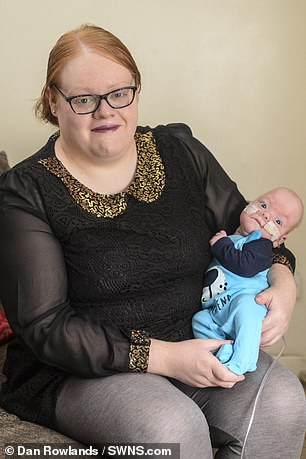 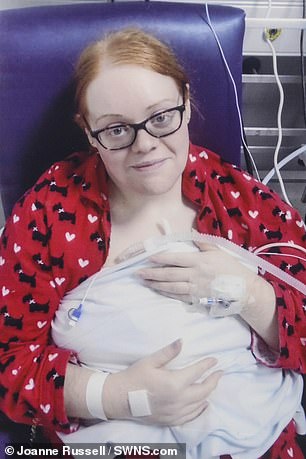 Mrs Russell (pictured left recently with Murphy) worried she would never be a mother after suffering a miscarriage in 2017. She is pictured right holding her son for the first time 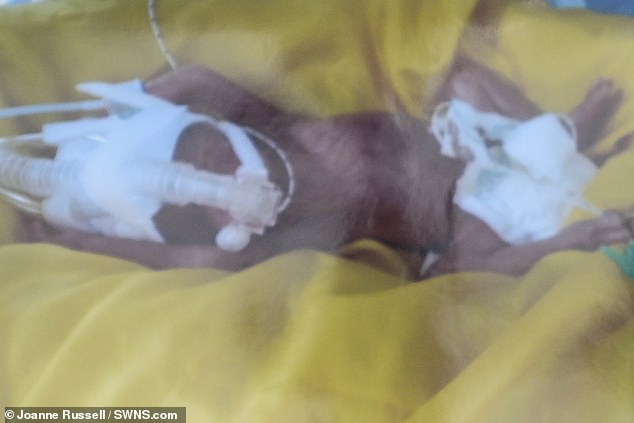 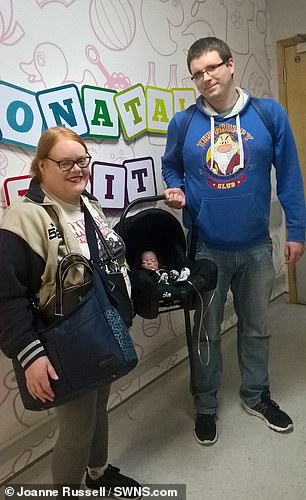 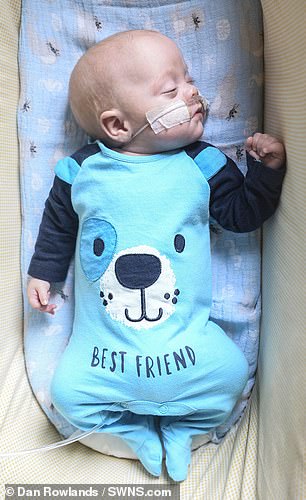 Mrs Russell and her husband Richard are pictured left taking Murphy home to Oakenshaw, near Bradford, a month ago. Although home, doctors will be unsure of Murphy’s future health until he grows older. They have warned he may have cerebral palsy

WHAT IS A PREMATURE BIRTH? AND WHAT ARE THE RISKS TO BABIES?

Doctors have warned the parents their son’s future health will only become clear as he gets older.

Mrs Russell will have to return to work in October and fears she will miss out on his milestones.

Her paid leave started the day after Murphy was born, four months before her due date.

Mrs Russell is now campaigning for the law on paid leave for parents of premature babies to be extended.

‘It would just be so helpful if you could have the time you spend in hospital at home as well,’ she said.

‘It’s just a worry you’re going back soon, you’ve not had much time to bond. It’s a bit of a countdown.

‘I’m worried about him all the time. It’s not like having a baby at full term and having nine months to enjoy with them.

‘The trouble is he is getting to be a normal baby now, in the next four months I will have to go back to work so there is a possibility I will miss his first steps, the first time he sits up.’

Mrs Russell is one of more than 300,000 parents in the campaign after the petition was set up by Catriona Ogilvy, who founded the premature-baby charity The Smallest Things.

The charity wants paid parental leave to be extended by the number of days a baby is born premature.

‘We urge the Government to act now so all parents have the time to bond with their babies and have a better chance of returning to work successfully after the trauma of time on a neonatal unit,’ Ms Ogilvy said.

‘We don’t believe work or pay should be added to those worries.’

Mrs Ogilvy and her team met with Kelly Tolhurst, MP for Rochester and Strood, and officials from the department for Business, Energy and Industrial Strategy (BEIS), for a review earlier this year.

But she feels ‘frustrated’ the findings have not been published. An additional consultation has now been recommended by the minister.

A BEIS spokesperson said a meeting is taking place this summer to see what further support could be provided for parents of premature, sick and multiple babies.

‘As a Government, we are committed to supporting working parents,’ the spokesperson said.

‘Having a premature or sick baby can be an incredibly difficult time for parents.

‘Some parents can face significant challenges if their baby spends a long time in neonatal care, which may impact on their ability to return and stay in work.’ 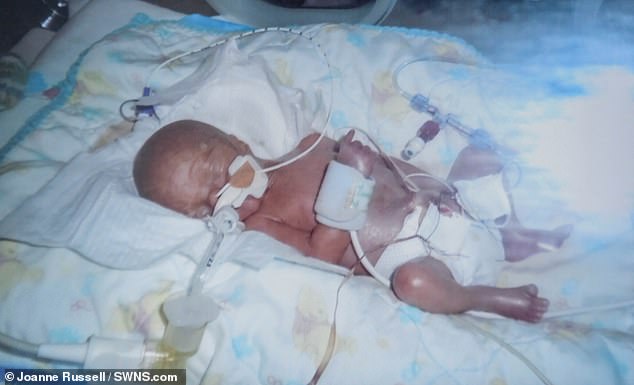 The newborn (pictured in an incubator) was initially put in a plastic bag. This is due to premature babies losing water easily through their thin skin. Wrapping an infant in a plastic bag and then blankets helps to keep them warm. Murphy was later moved to a heated cot 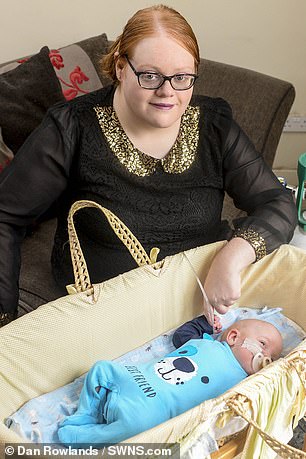 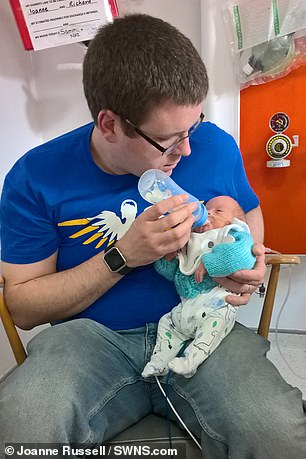 Mrs Russell (left) is dreading going back to her cleaning job in a month as she worries this will cause her to miss out on Murphy’s milestones. Mr Russell is pictured left feeding his son in hospital after he was finally strong enough to be taken out of the incubator 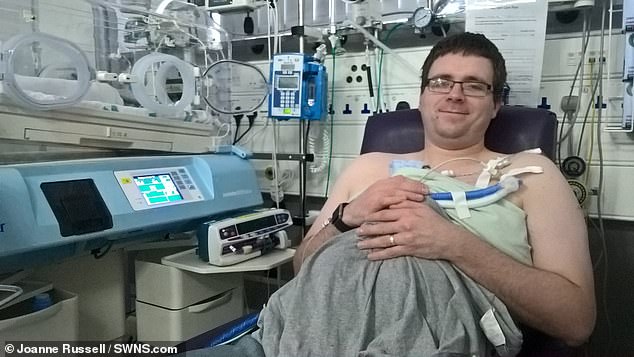