A baby has been killed by a drunk driver who plowed into the shopping cart she was sitting in while her mother unloaded groceries in a Dollar General parking lot.

Corinna Tovar, one, was in the baby seat of the shopping cart when driver David Fuentes came roaring towards her in a blue Ford Ranger at 1.50pm in San Antonio, Texas.

He made a wide turn while entering the parking lot and crashed into the cart, sending Corinna flying out of it and injuring her mother.

The toddler was later pronounced dead and her mother, whose name police have not released yet, is in the hospital being treated for injuries.

A third woman who is in her 60s was also with them and she was also injured. That woman had to undergo surgery and is now in a critical condition.

Fuentes had someone else with him in his vehicle at the time who is being questioned.

San Antonio Police Department say he was traveling at a high speed when he turned into the parking lot but they have not specified how fast he was going.

He was charged with intoxication manslaughter and intoxication assault. He was booked into county jail on a $75,000 bond.

The police department would not give more information about the incident on Tuesday including what Fuentes’ blood alcohol level was or how fast he was driving. 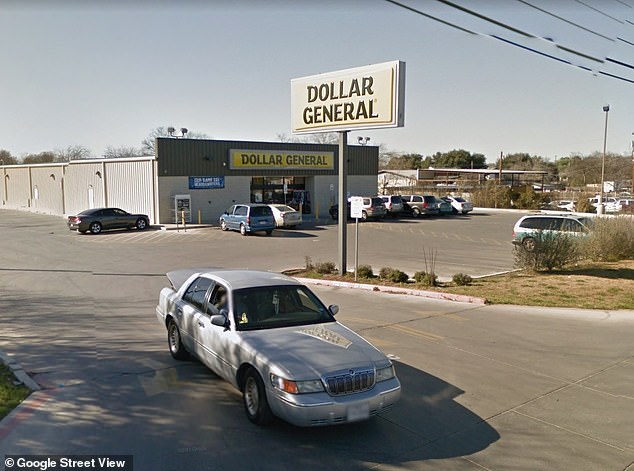 This is the Dollar General store where the baby was killed. Fuentes went too wide as he turned into the parking lot and plowed into the car which was at the rear of the baby’s mother’s vehicle

The charges may change if their health deteriorates.

The incident was captured on the Dollar General’s surveillance cameras but no video of it has been released by police.

It is unclear if Fuentes has a criminal background.

Some of the toddler’s family members grieved her loss on social media. Among them was a woman who said she was Corinna’s aunt.

She thanked well-wishers for their kind remarks and asked them to pray for the recovery of the child’s mother and the other woman who was harmed.

The woman did not immediately respond to DailyMail.com’s inquiries.

Many were shocked by the incident and described it as their ‘worst nightmare’.