Baby inhaled an LED bulb from the Christmas tree

A 14-month-old girl inhaled an LED bulb that was originally used as a decoration on her family’s Christmas tree, a bizarre new case report reveals.

The French baby, whose name is unknown, suffered from coughing and wheezing in the run-up to Christmas last year.

Doctors suspected she had developed asthma and dished her out drugs to combat her symptoms. However, they didn’t work.

Medical scans three weeks later revealed a U-shaped foreign body in her left lung, which surgeons were concerned about.

The French baby, whose name is unknown, was found to have inhaled a LED lightbulb (pictured is the chest X-ray of a U-shaped foreign body in her left lung)

The object was found to be an LED bulb. It was removed using a bronchoscope – a flexible tube with a camera and light attached to the end.

Her parents, who are believed to be from Marseille, then realised it had come from their Christmas tree because they were missing a bulb.

The tale, published in Respiratory Medicine Case Reports, prompted doctors to joke about how Christmas tunes often lead many to relive childhood memories.

Writing in the journal, they said: ‘We are not absolutely sure that this young, 14-month-old girl will be in the same spirit in the coming years.’

Doctors at the University Hospital Timone-Enfants in Marseille warned this isn’t the first time a baby has inhaled a Christmas decoration.

A 15-month-old Chinese girl also had a tree light bulb lodged in her lung after she inhaled it, medics in Hong Kong revealed in 2015. 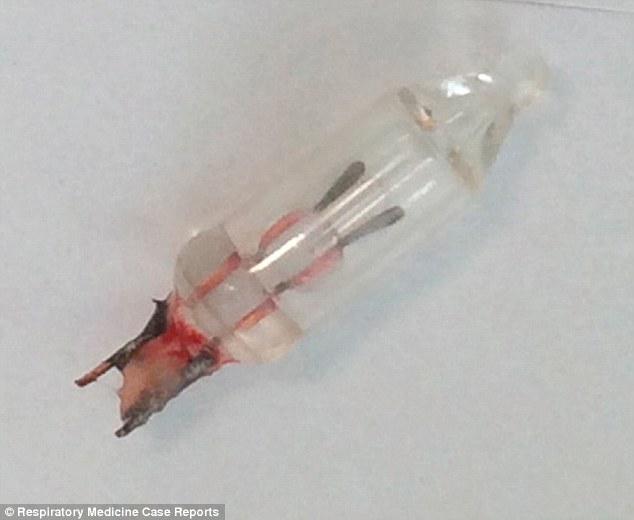 Her parents, who are believed to be from Marseille, realised the decoration had come from their Christmas tree because they were missing one

ANOTHER BIZARRE CASE OF AN INHALED OBJECT

The new case comes after MailOnline broke the news in September of a postman who inhaled a Playmobil cone that was lodged in his lung for 40 years.

Paul Baxter, from Croston, Lancashire, was suspected to have cancer after doctors found a mass in the ex-smoker’s lungs.

Tests at first appeared to confirm their fears – until they inserted a tiny camera to look at the suspected tumour. They burst into laughter when they saw.

What they believed was a malignant growth turned out to be a toy plastic traffic cone from a Playmobil set he received as a seventh birthday present.

Mr Baxter, 50, has since kept it as a souvenir of his ordeal, which came out in ‘perfect working order’.

He also revealed doctors could have found it 20 years ago – but missed it.

LED bulbs should be modified

The French doctors claim that manufacturers should ‘possibly reconsider the shape of some LED bulbs’.

And they described how a child needed an emergency tracheostomy two years after inhaling a flat plastic Christmas tree that was embedded in its throat.

They wrote: ‘To diagnose a foreign body in the respiratory tract at the Christmas period in a young child may be a challenge.

‘Nearly all children are sick during this period.’

They said wheezy respiratory infections are so frequent that a misdiagnosis can be easy.

Writing in the journal, they added: ‘Therefore the “Christmas bronchial aspiration” should be of particular knowledge.

‘The imagination of our children for inhaling objects, including Christmas decorations, is limitless.’

The little girl was reported to have made a good recovery after the procedure.

It is common for young children to aspirate a toy, say experts, but the problem is usually spotted very quickly as it causes breathing problems. It most often happens in toddlers under three.

Usually children swallow items instead of inhaling them. These pass through the body naturally, although thin, sharp objects can cause internal injury.