A mother who was told she would never carry a child of her own has revealed her joy at falling pregnant with two miracle babies after adopting another couple’s embryos.

Jenna Lowell and her husband Jon, both 29, from Arizona, married in 2015 seven months after meeting on a dating app and it wasn’t long before Jenna floated the idea of starting a family.

‘I have wanted to be a mother my whole life, so pretty quickly after getting married I introduced the conversation of having kids,’ Jenna told FEMAIL.

She added that, although Jon was keen to become a father, he convinced his wife to wait a few years to enjoy being married before trying for a baby.

Jenna and her husband Jon, both 29, were desperate to have a child after discovering both had fertility issues. They eventually adopted embryos, meaning Jenna could carry her children but they had other biological parents 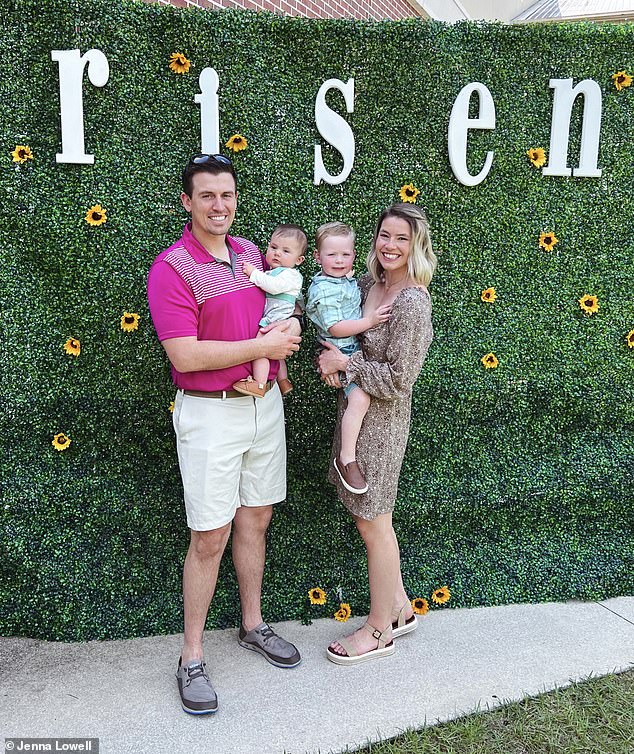 The couple have welcomed two sons, Colton and Cayden, through embryo adoption. They want to raise awareness to help other couples struggling with fertility issues

‘Around the beginning of 2017, we decided to take a nonchalant attitude to having kids – we thought “if it happens, it happens”,’ she said.

But about a year later when Jenna hadn’t fallen pregnant, the pair began to worry and went for fertility testing.

‘I had a gut feeling something wasn’t right,’ she said. ‘Every month when I didn’t fall pregnant it would hit me like a ton of bricks.’

She added she was apprehensive about seeing a doctor for fear of finding out something was wrong – but throughout the process Jon was her rock.

Jenna needed her husband more than ever when tests revealed she had a low egg count – and there were problems on Jon’s side too.

‘Within three weeks we received word we’d never conceive naturally and there was a less than one per cent chance of having biological children,’ she said.

What is embryo adoption?

When prospective parents want to adopt a child, some may consider embryo adoption.

After parents go through IVF, they may have some frozen embryos left over that they no longer need. They sometimes choose to donate their embryos to adoptive parents, which happens through an embryo adoption agency.

The agency helps to match up the donors with adoptive parents before contracts are signed so the donors can legally ‘release’ their embryos.

Once the embryos have been released, a transfer is arranged where they are implanted into the uterus of the adoptive mother, allowing her to carry her own child.

Adoptive parents can choose to have more than one child from the embryo donors.

According to the Embryo Adoption Center, an adopting family can expect to pay between $7,500 and $19,500 for the process – which includes a fee for the agency, a home study, drawing up of contracts and the transfer itself.

As the pair processed the news, they moved from their home state of Arizona to Utah for Jon’s career in the military and decided to ‘press pause’ on their fertility journey.

Eight months later, Jen went for more tests which showed her ability to produce eggs had declined even further.

While doctors gave her the option to harvest and freeze some eggs for an IVF attempt, Jenna had already made up her mind.

She said: ‘It was really hard but I dove into researching adoption. I’ve wanted to adopt since I was a little girl.’

But a few weeks later Jon came to Jenna with some research of his own and suggested the couple adopt embryos instead – something Jenna had never heard of.

The process gives an adoptive mother the chance to carry a child after adopting the embryos of a donor couple.

Donor couples are usually people who have been through IVF and have embryos left over from the process.

Through an agency, prospective parents are matched up with donor couples who can agree to release their embryos and give others the chance to have a child.

After Jenna and Jon signed up with an agency in November 2018, they found a match within weeks.

In April 2019, she had the embryos transferred into her womb – and by December she had given birth to her son Colton.

For Jenna, the feeling of being pregnant was incredibly emotional after being told for so long she wouldn’t carry a child.

‘It was surreal. It’s something you’ve wanted for so long, but there’s a side of it that sucks.

‘There’s a constant mental and emotional tug of war going on,’ she explained.

But when Colton arrived happy and healthy in December 2019, Jenna and Jon were overjoyed to finally have their miracle baby. 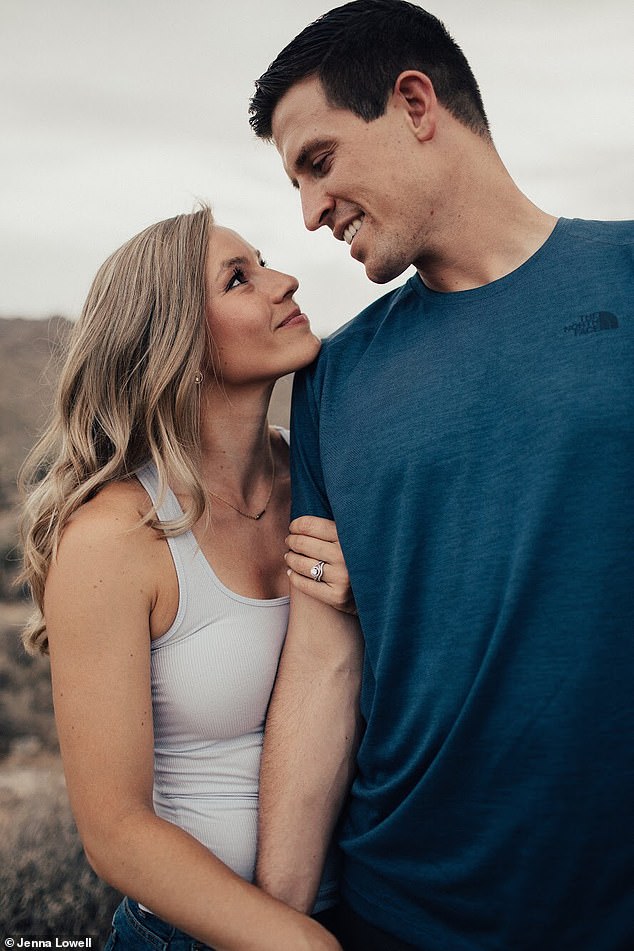 The couple, pictured, haven’t ruled out going through the process of embryo adoption again in future

And while they grappled with being first-time parents, they decided they wanted to go through the process all over again to give Colton a younger sibling.

Using the same agency, the pair were matched with a second donor couple and Jenna had more embryos transferred. In November 2021, she gave birth to their second son, Cayden.

Although they feel their family is complete, Jenna and Jon haven’t ruled out going through the process of embryo adoption again in future.

Jenna now advocates for the process for couples struggling with infertility, although she admits there are financial obstacles for some couples.

Jenna added the second adoption added up to around $11,000.

She explained the costs covered freezing the embryos, the transfer and legal fees for the contracts that confirmed the release of embryos from the donors to Jenna and Jon.

As the boys get older, the parents will raise their boys to understand how they were conceived and born and they’re going down the path of open adoption for both sons.

‘Colton is almost two and a half years old now and we have his biological parents on Facebook. We keep up with them all the time,’ she said.

Cayden is just six months old, but as he gets older Jenna hopes to be in regular contact with his biological parents too.

Now Jenna tells her story to help other couples going through the pain of infertility and give them hope that there are plenty of options for them.

‘We kept the beginning of our journey with infertility quiet and that was harder on me than I realised,’ Jenna recalled.

‘Now we’re very open with our journey of how we got our boys. They’re an amazing gift.’