A mother was puzzled when her baby monitor sent a movement alert even though her son was not in his crib – only to discover it had been triggered by her cat playing with the cot mobile.

Emily Marzullo, 26, from Queensland, Australia, couldn’t work out why a notification popped up on her phone when nine-month-old Atlas was not in his bedroom but sleeping in a bassinet in her room.

When she looked at the screen, she was stunned to see five-year-old Persian cat Mr Pickles staring into the baby camera.

Emily Marzullo, 26, from Queensland, Australia, saw her Persian cat Mr Pickles lying on his back and playing with the mobile in her nine-month-old son Atlas’s crib on the baby monitor

While lying on his back next to a teddy bear, the mischievous moggy was happily batting away at the mobile hung above Atlas’s cot, without a care in the world.

Now whenever Atlas is sleeping in his mother’s bedroom, Emily gets notifications that not only is Mr Pickles enjoying playtime, but he has also led his brother Wilbur, four, to the party.

Ms Marzullo said: ‘Mr Pickles is always breaking into Atlas’s room when he’s not around but I was still shocked when my phone flashed up there was movement in the crib. 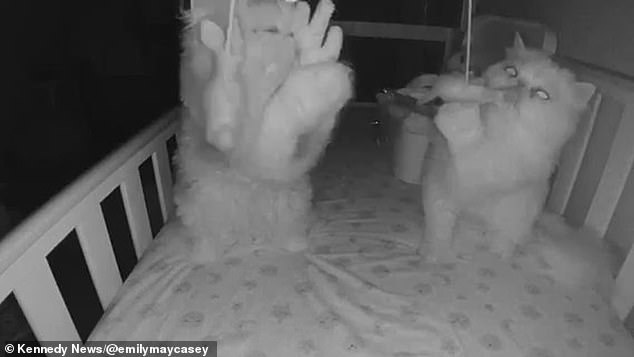 Ms Marzullo still gets notifications as Mr Pickles still plays in Atlas’s crib and has invited his brother Wilbur, four, to join him

‘When I looked at the footage I couldn’t help but laugh when I saw him lying on his back just batting away at the mobile with his paws.

‘Mr Pickles has been obsessed with the toy ever since I brought it back home in December.

‘He must have told Wilbur how much fun it was as they’re both in the crib playing with it regularly.

‘They’ll also play with Atlas’ activity centre when they’re together, they like to spin the wooden beads over his head. 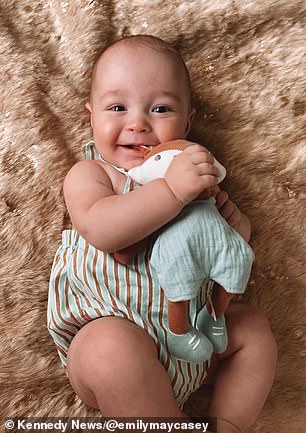 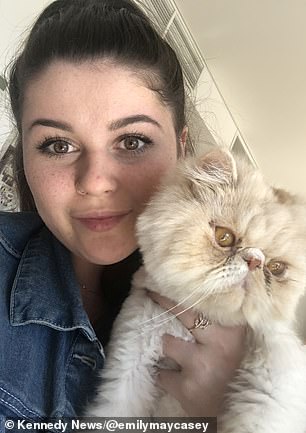 ‘I don’t leave the cats alone with Atlas in his room but they do really get along. He’s always crawling after them when out and about.’

After Emily uploaded the video to TikTok on June 9 with the caption ‘He’s always breaking into my son’s room’, it was viewed more than 487,000 times with many people comparing Mr Pickles to a baby.

One person said: ‘Cat: “I was born first Emily, I called dibs.”‘

A third wrote: ‘Now I have to buy a baby mobile for my cats.’ 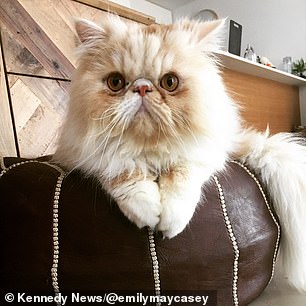 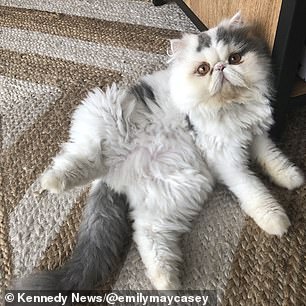 Mr Pickles (left), five, and Wilbur (right), four, play with the mobile together in Atlas’s cot when he’s not there