Time is running out to reunite a baby orca calf with his lost pod after he was found beached and abandoned in New Zealand.

Hundreds of Kiwis have joined the massive search mission to track down the juvenile whale’s mother and lost pod before it’s too late.

The orca named Toa by locals is too young to survive alone in the wild and will die unless it’s reunited with its pod.

The orca calf was found beached in a rockpool by two teens in Plimmerton in Wellington’s north on Sunday, sparking a widespread rescue and search effort.

The Department of Conservation updated the public on the orca’s condition on Tuesday afternoon as its efforts to save the orca calf ramp up.

‘The animal has been provided electrolytes through a tube by veterinarians. This method does cause the animal some distress but is the best option to ensure the animal remains in reasonable condition at this time,’ the department posted on Facebook.

‘Ensuring the animal remains in reasonable condition and reuniting it with its pod remains our objective.

‘We have a DOC vessel out at sea searching for the pod and a local pilot has also volunteered to support the search. So far he has made one flight today and will make a second flight this afternoon.’ 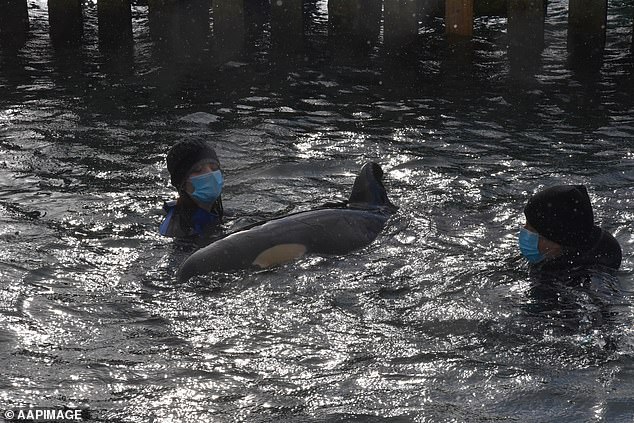 Time is running out to reunite the orca calf with its lost pod. Pictured is the orca in Wellington on Tuesday

The Wellington community has rallied together and given up their time to support and help care for Toa with the help of the local council and Wellington Zoo.

Volunteers have been jumping in and out of the water on an hourly basis to check on the calf.

‘We put a man on the moon. Surely we can get a whale back to its family.’

Local Kate Godfree spent time in the water with Toa earlier on Tuesday and comforted him by tapping and stroking his dorsal fin to simulate interactions with his lost mother.

‘I have an orca tattoo. I grew up watching Free Willy. It’s a sh***y situation but this is amazing,’ she said.

Dr Visser has been blown away by the public support.

‘It’s been a phenomenal effort. We’ve had donations of food and blankets. Heaters. So many volunteers,’ she said.

‘We are making him as comfortable as possible.’ 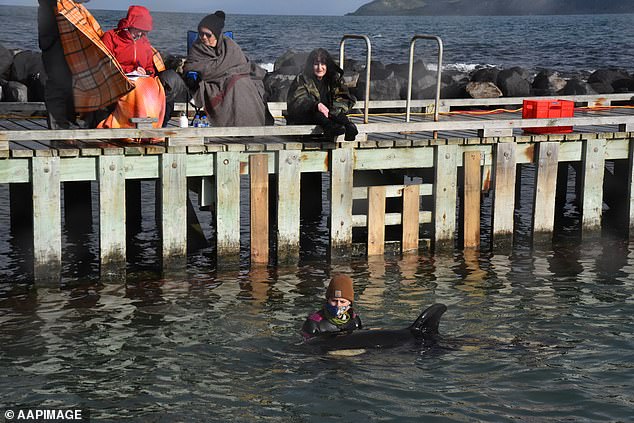 Wellington residents have responded en masse to Toa’s plight, searching coastlines by foot, boat and plane in the hope of spotting the pointed dorsal fin of a relative.

‘Orcas travel between 100 and 150 kilometres a day but they don’t go in a straight line. They could turn around and come back here tomorrow. We just don’t know,’ Dr Visser said.

Reports have emerged of a possible sighting of a pod in the Marlborough Sounds at the north of South Island.

The roaming nature of the animal means if a pod is found, it’s likely to be Toa’s, however any pod may do.

Orca pods have been known to adopt lost children, so long as the mother is lactating and can support the youngster. 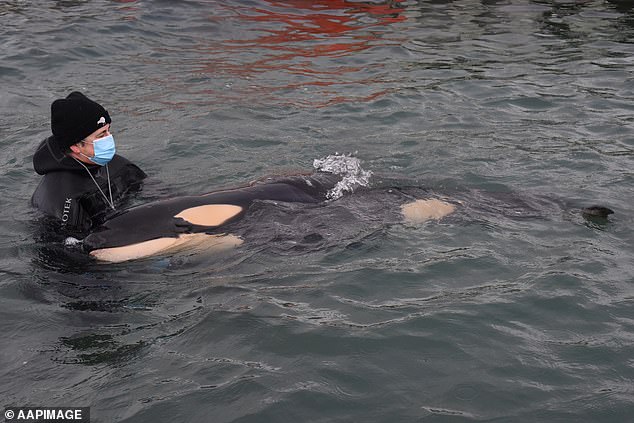 Dr Visser said they would most likely put a boat with the pod and then take Toa to it by road or boat.

‘It’s difficult to transport by helicopter. You don’t want a 200-pound animal thrashing around inside a chopper,’ she said.

New Zealand is home to up to 200 orcas, according to the Department of Conservation.

Orcas, also known as killer whales can be identified by their distinctive black and white markings and very tall, prominent dorsal fin.

Orca pods are known to venture into Wellington Harbour throughout the warmer months but rarely stick around.