Baby saved from 40 seizures a day with whipping cream diet

Parents of a premature toddler with a heart defect and Down’s Syndrome thought their worries were over after their newborn underwent hernia surgery.

But as little Olivia Browning, two, grew, her problems seemed to escalate, resulting in as many as 40 frantic seizures a day, that would debilitate her development and eventually caused her to lose her ability to smile and laugh.

Mom Sandy Browning, 34, and dad William, 33, of Bolingbrook, Illinois, were at their last end when a surprise diet of meticulously measured whipping cream provided a solution to all little Olivia’s problems and saw her life switch from constant unrest and seizures to a bright convulsion-free lifestyle.

Little angel: Olivia Browning, two, of Bolingbrook Illinois was born with a heart defect and Down syndrome, underwent surgery at five months which gave her 40 seizures a day 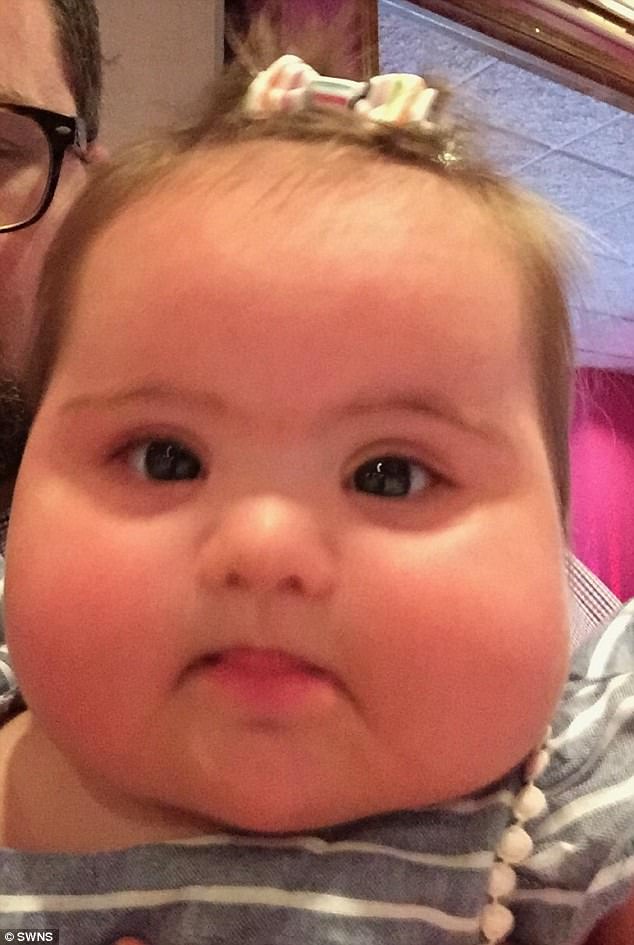 Sweet cheeks! The baby underweight eight different medical treatments for eight months, including steroids which caused her to bloat (above) before finding the solution diet 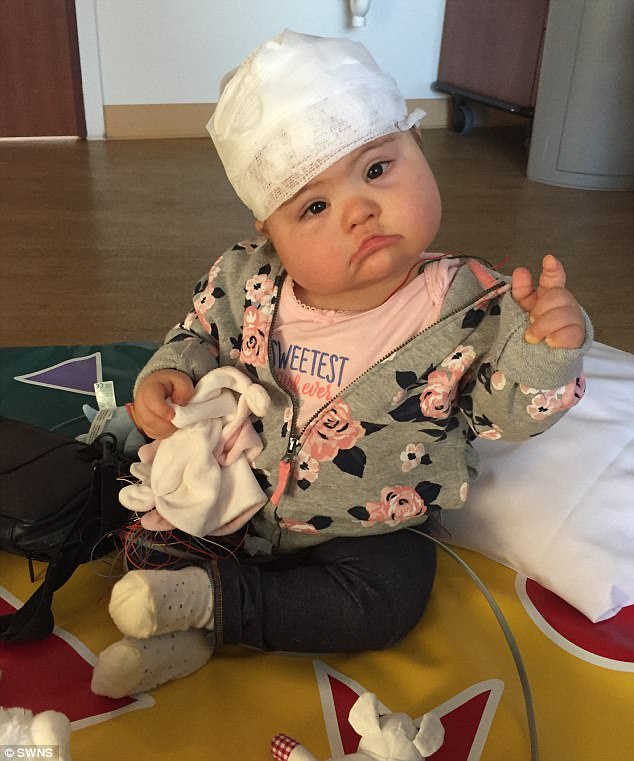 Itty bitty baby: Olivia’s seizures escalated and severely stunted her mental development resulting in her lost ability to smile and laugh, which broke her family’s heart

Olivia was born four weeks early in October 2015 with a heart defect. She underwent surgery at five months for an acid-leaking hernia, but it left her with devastating side effects of debilitating brain spasms that started just one day after her operation.

The child saw stunted development due to her seizures that made her lose her ability to smile and giggle, which broke her mother’s heart.

‘It was heartbreaking and frustrating watching Olivia have seizures. I felt helpless,’ Sandy, a finance worker, shared to SWNS Media.

‘Every time she had one it was like an explosion inside her head. Her brain was shutting down and she lost some of her development,’ she added.

The family tried a eight different medicines over eight months, and though some appeased the seizures, they also gave her severe side effects.

‘I missed seeing her smile and constantly worried about her crawling or walking because she would need to be monitored constantly, otherwise she could hurt herself,’ the mom said.

‘Neither of us were sleeping because Olivia couldn’t sleep and we were terrified she would have seizures at night and go into cardiac arrest,’ she added.

But doctors struggled to put their finger on Olivia’s problem exactly.

‘Her eyes would close and she would go into the fetal position then come back up and go back into that position repeatedly,’ Sandy said. 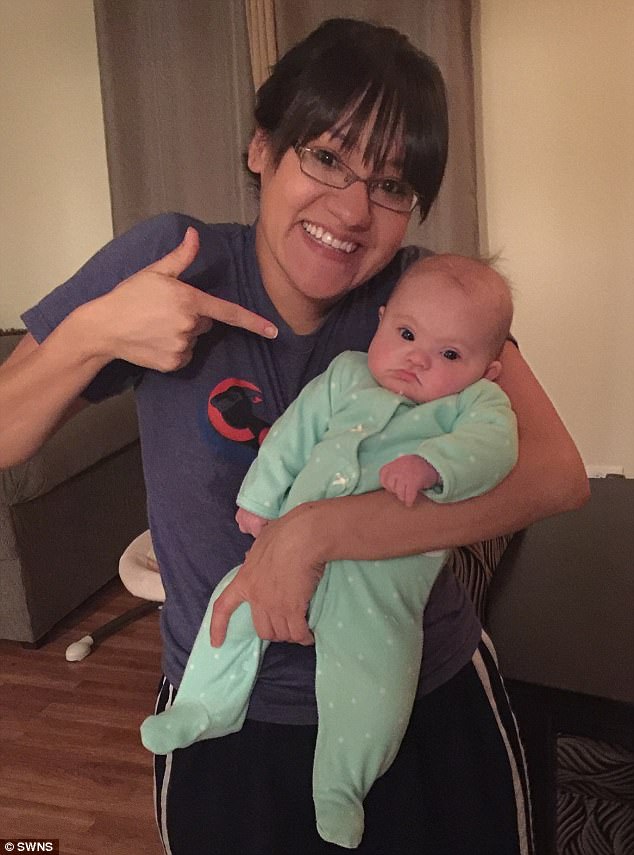 Tiny tot: The little one poses for a picture with her mom before her surgery at five months 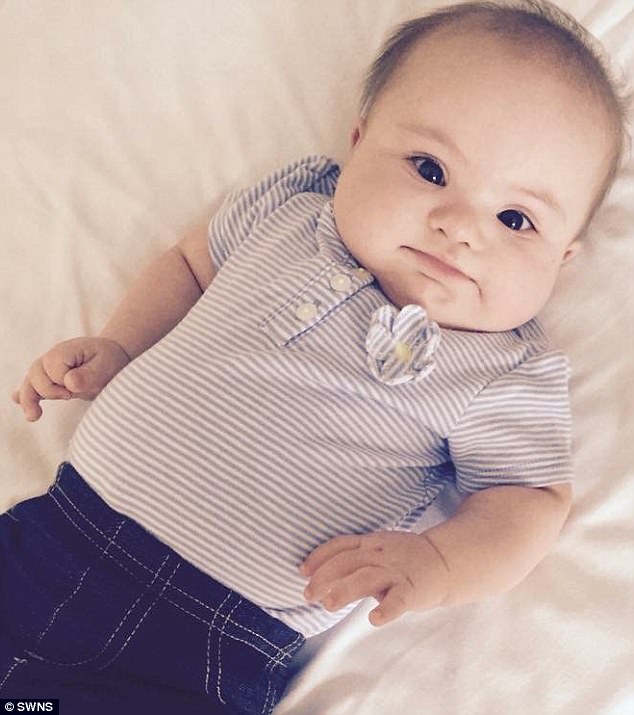 Just chilling! Olivia above, pictured before her surgery, that led to eight months of medicine trials and battle with severe side effects before finding a cure to her daily spasms 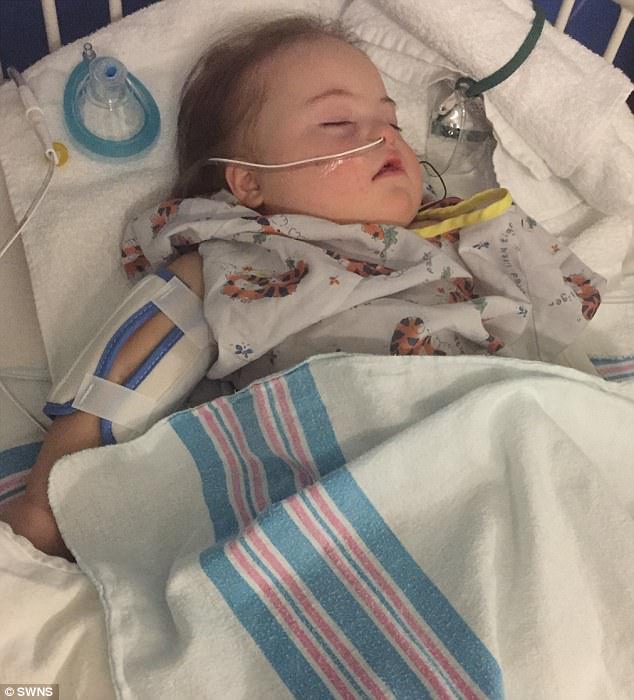 Getting better: The baby is pictured above at the hospital after her procedure for her hernia

‘I thought I was going crazy because at first the doctors told me it was a digestion problem and gave us laxatives,’ she added.

But the mom knew it was a more serious issue at hand. After researching she deduced it could be a neurological issue and sought the expertise of a specialist.

A specialist then diagnosed the tot with chronic epilepsy and started her on steroids, which caused the little one to bloat with water retention making her look severely overweight, in addition to risking liver damage.

But in February Olivia’s family was transferred to Lurie Children’s Hospital of Chicago where they tried something different: a ketogenic diet, which is a low carbohydrate, high fat eating balance.

The diet was designed for Olivia to consume a 3:1 fat to carbohydrate ratio, maintained by eating 220 grams of whipping cream a day. The increased fat intake keeps the tot in a state of ketosis, which means her body has no choice but to burn the fat.

And the results of the added sweets are colossal. The whipping cream routine stopped Olivia’s seizures completely and she has even regained her ability to smile.

The reasoning behind the whipping cream success isn’t clear and still leaves doctors and scientists stumped today, but the results of the ketogenic diet has cured up to one in seven children with epilepsy.

At first the mom was skeptical about the diet.

‘The doctors said they could ween Olivia off all the medicines and I was like, “Really?” I was a little angry and very skeptical, but we were willing to try anything,’ she shared. 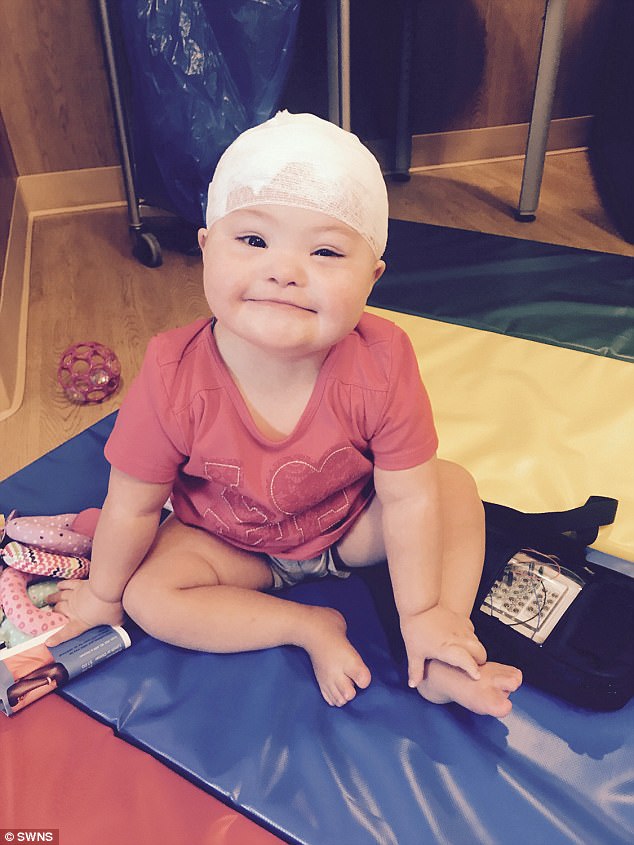 A fighter! Olivia manages a smile and dons a bandage over the electrodes used to record her brain activity after her surgery let to countless daily seizures 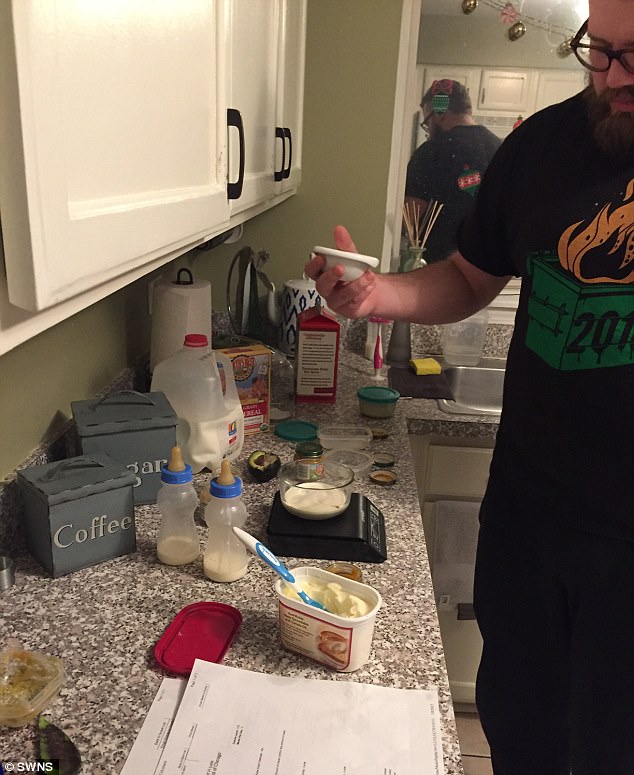 Daddy duty! In February 2017 the family trialed a ketogenic diet, which balances a 3:1 ratio of fat to carbohydrates a day, and cured Olivia of her seizures after just three weeks 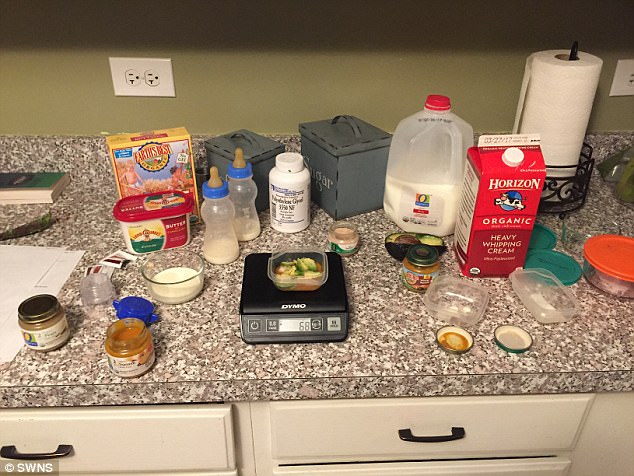 All the right measurements! Her new diet sees her guzzle whipping cream with every meal, even in her daily bottles of milk, and eat loads of butter and avocado to rack up her fat intake 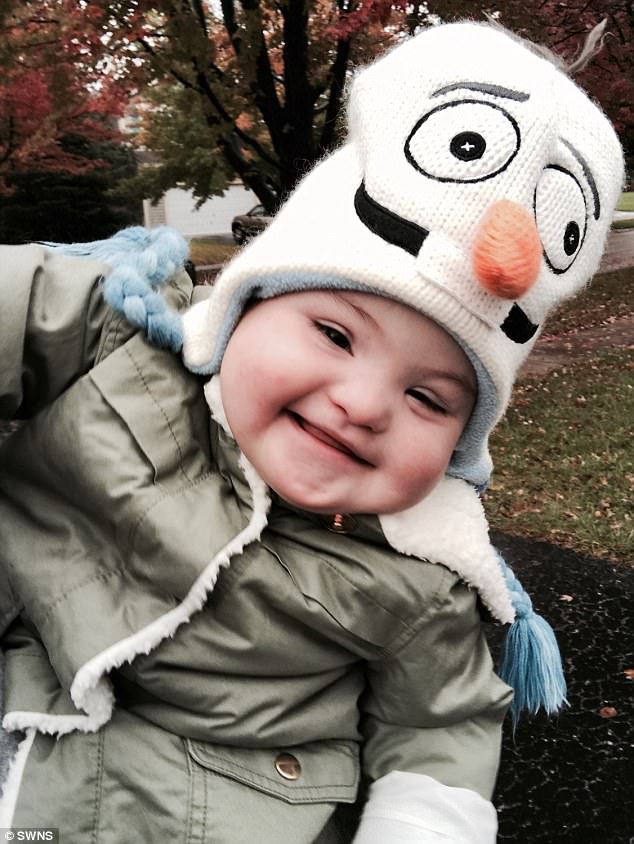 Better than ever! Today the tot hasn’t suffered a seizure for the past eight months since starting the fat-heavy diet and has has made great stride in her development and is smiling again 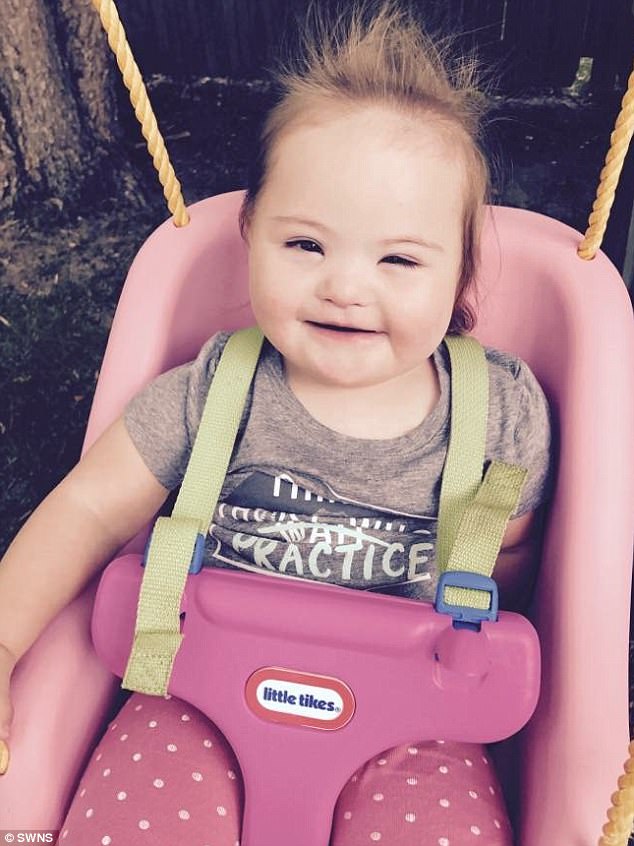 Happy girl! Now Olivia is stronger than ever and is laughing again, and doctors say she can eventually ween off the whipping cream diet and live a seizure free life

‘The diet has changed everything. Before, she would be having fits constantly. It was five a day, then ten, then 30 or 40. Now Olivia is 100 per cent seizure free. The ketogenic diet has given her a chance to reset – we can tell her brain isn’t battering her anymore,’ Sandy expressed.

Olivia was back to her normal self after just three weeks on the new diet.

‘She is smiling and laughing again. It’s incredible. We feel like we have got our daughter back,’ she added.

They show Olivia before she started suffering seizures, when she was bloated due to taking steroids and now, seizure-free. And her future looks bright with many children on the diet eventually weened off to live seizure-free lives.

Now Olivia eats a fat-dense diet with avocado, heavy whipping cream, egg and butter for breakfast along with a morning bottle filled with 20g cream, 20g milk and 5oz water.

Later in the day she eats yoghurt, whole milk, fruit, and more whipping cream and butter and another bottle. Dinner is the same, except paired with meat and vegetables.

The new diet will allow Olivia to develop mentally and regain the skills she lost due to her spasms.

‘When I first met Olivia she had many types of seizures, including spasms, myoclonic jerks of her limbs, and atonic seizures. For her, it made learning anything new almost impossible. It’s like her brain hit a reset button every time she had a seizure,’ Olivia’s dietitian and nutritionist at Lurie Hospital Robyn Blackford said.

Olivia hasn’t reported a seizure since the start of the diet 8 months ago.

‘She has been weaned from other seizure medications that have potential unwanted and dangerous side effects,’ Robyn shared.

And the family couldn’t be more pleased and relieved.