This adorable picture shows a newborn baby surrounded by nearly 30 litres of frozen breast milk, arranged in a heart shape, pumped by her mother.

Nia Malika, believed to be from Ohio, hooks herself to a breast pump every three hours to make sure Nora never runs out of vital nutrients.

The high school student’s bizarre plan will allow her to return to work and school while nursing her daughter, she hopes.

Ms Malika has even adopted a diet designed to help her lactate more, including oatmeal for breakfast and special cookies.

The self-proclaimed ‘breastfeeding beast’ drinks water ‘like a fish’ to aid the natural process, she wrote on her Instagram page.

Nia Malika, believed to be from Ohio, hooks herself to a breast pump every three hours to make sure her daughter Nora never runs out of vital nutrients

Writing on her social media, she said: ‘I want the best for my baby. Every three hours around the clock I’m hooked up to my pump.

‘I never miss a scheduled pump time even in the middle of the night.

‘Every week i’m making some type of lactation cookies, oatmeal for breakfast everyday, I drink water like a fish.’

How much milk has she collected?

She said that over the past two months she has been able to store away 1000 fluid ounces – the equivalent of just more than 28 litres. 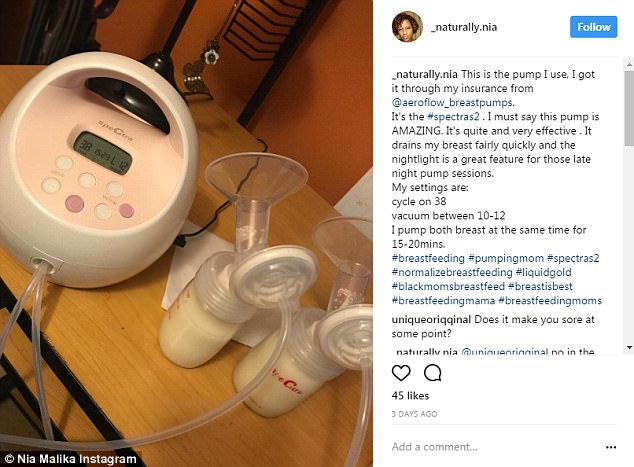 The high school student’s bizarre plan will allow her to return to work and school while nursing her daughter, she hopes

Ms Malika added: ‘I’m dedicated to providing my baby with the nutrition she needs, I trust my body and know this is what I was made for.

WHAT TO EAT WHILE BREASTFEEDING

You don’t need to eat anything special while breastfeeding, but the NHS recommends:

‘When people say I’m lucky to have this supply I simply tell them i’m not lucky, I’m blessed and I work really hard to get where I am and will continue to do whatever it takes to keep my girl fed.’

The post was eventually shared by the Facebook page Breastfeeding Mama Talk, where it collected more than 4,000 likes.

Women can expect to produce around 900ml of breastmilk after five weeks, with experts saying a minimum of 500ml is needed to ensure a health toddler.

This comes after a survey in March found that mothers are giving up breastfeeding because they are too embarrassed.

Figures from more than 152,000 British women showed that just 45 per cent still give their infants breast milk after two months.

How long should you breastfeed?

The NHS recommends that babies are breastfed exclusively for the first six months and after that a combination of breastmilk and food for about a year.

Breast milk contains antibodies passed on from the mother that boost the babies’ immune systems and help them fight of infections and viruses.

There is also evidence that babies who were breastfed have higher IQs and are less at risk of obesity – as formula milk is higher in fat.