A six-month-old baby who doctors warned could be stuck on a ventilator for life has new hope after being given personalised breathing therapy.

He relies on a machine to breathe and has already contracted pneumonia since being born in March.

After warning his parents, Shannon Turner and Jamie Hambly, both 22, that their son might not survive, doctors have now taken inspiration from a hospital in the US and designed a personalised therapy for Archie.

‘Archie’s Protocol’ involves regularly changing the way his ventilator works and training his lungs to start working for themselves, and is showing promising results.

He recently opened his eyes for the first time since getting sick with pneumonia and there are signs his lungs are starting to grow, his parents said. 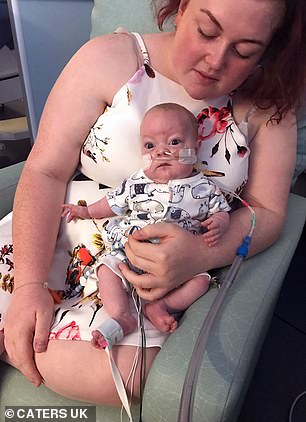 Archie Hambly, from Plymouth in Devon, weighed just one pound (454g) when he was born 13 weeks premature. He has struggled because his lungs are under-developed and he relies on a ventilator to breathe

‘I went into labour when I was five months pregnant and Archie was born weighing just over 1lb,’ Miss Turner, from Plymouth, said.

‘We were in the NICU for months and everybody else’s babies were going home, but Archie just kept getting sicker and sicker after he contracted the pneumonia.

‘In June, his doctors told us that he would not survive and that we’d never take him home from the hospital.

‘We were beyond devastated but determined not to give up. We are his parents and it is our job to fight for him.’

Archie was born with underdeveloped lungs because he was more than three months premature, which meant he had to use a ventilator to breathe.

As a result, he developed bronchopulmonary dysplasia, also known as chronic lung disease, which stems from using the breathing machines for so long.

The condition has left him with breathing difficulties and susceptible to deadly infections such as pneumonia, which he developed in June.

Miss Turner started raising £10,000 to get Archie to a hospital in Ohio where doctors could change the way they used the ventilator to try to get his lungs to grow. 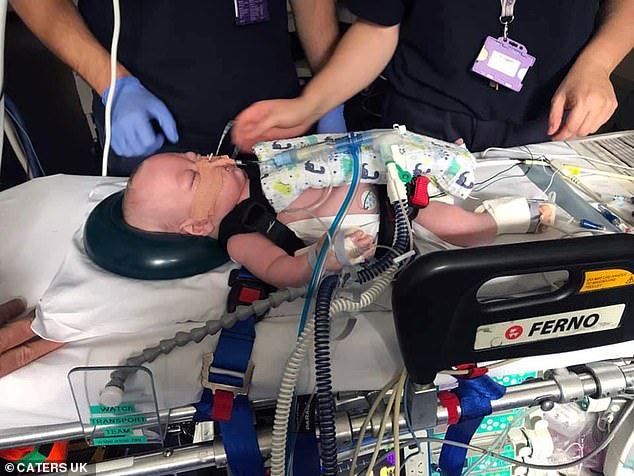 Doctors warned Archie’s parents he might die when he got pneumonia because his lungs are so weak, but there are now signs his health is getting better, his parents said 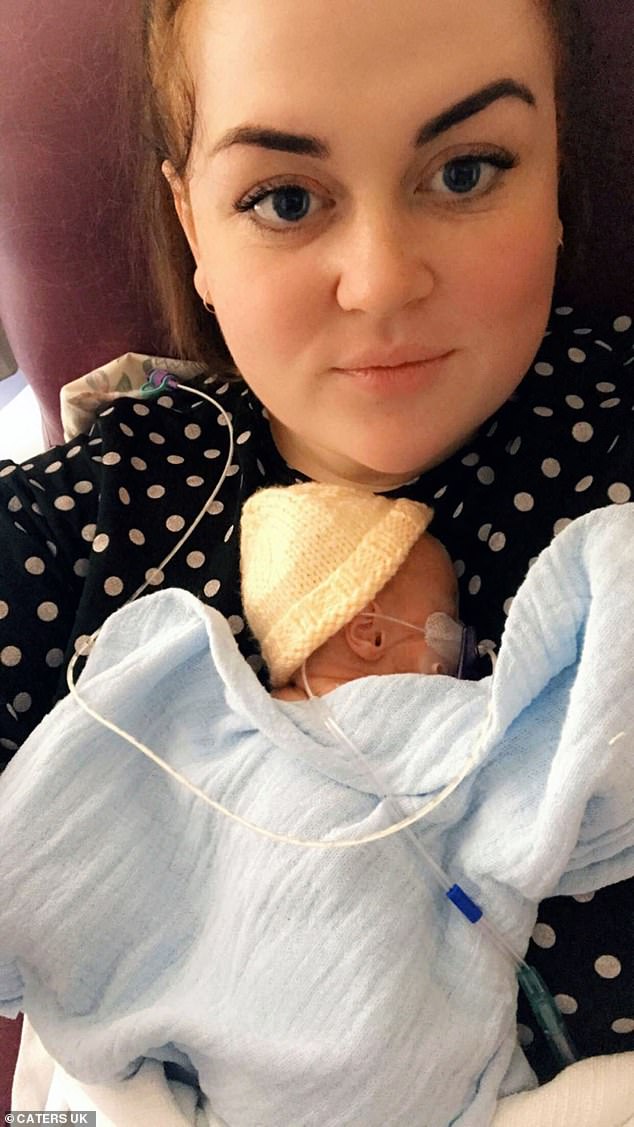 Archie, pictured with his mother Shannon Turner, 22, developed pneumonia in June and doctors warned he might not be strong enough to survive it 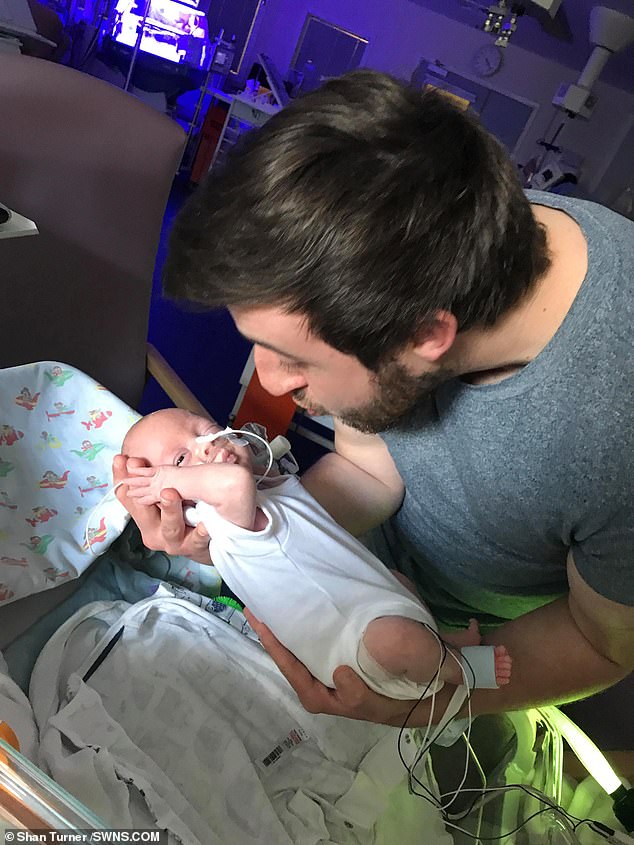 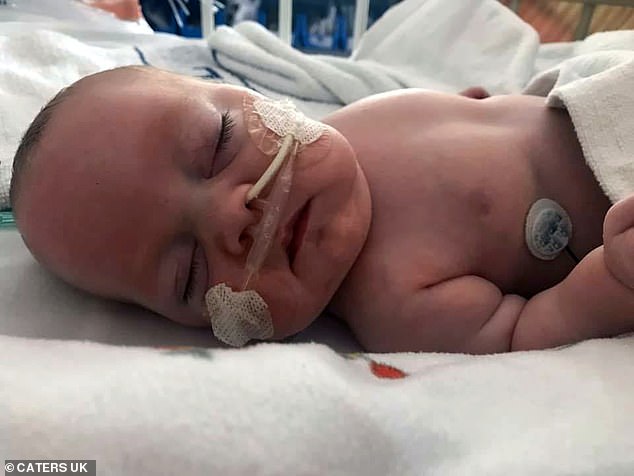 Doctors started the new ‘Archie’s Protocol’ treatment three weeks ago and Miss Turner said: ‘Archie’s lungs aren’t the age he is, but as long as they can continue to progress slowly, we’re on the right track’

Bronchopulmonary dysplasia (BPD) is a lung condition that can cause long-term breathing problems.

The condition can develop in infants who need ventilators to help them breathe in their early days. Sometimes premature babies are born before their lungs are fully formed, meaning they cannot properly take in and absorb oxygen to stay alive.

The lungs also may not produce enough surfactant – a fluid that helps keep the lungs open.

Children suffering with this condition are given extra oxygen, but using ventilator machines can irritate the baby’s airways and scar the fragile air sacs lining the lungs.

The machines can pump in more gas than the small sacs – called alveoli – can handle, causing physical damage, or they may damage the breathing tubes when they’re put in.

Irritation and scarring makes breathing more difficult for the child, meaning it has to stay on a ventilator for longer. And although most children can recover from BPD, some face long-term breathing problems afterwards.

The machines also raise the risk of babies catching infections such as pneumonia, which can be deadly.

The condition most commonly affects in babies who are born more than 10 weeks before their due dates and weigh less than 2 pounds.

It affects around 10,000 newborns every year in the US. It’s not known how many children in the UK develop the illness.

But, after intensive care doctors at Bristol Children’s Hospital asked to see details of the treatment, they designed a form of it themselves.

It works by gradually forcing the lungs to take deeper, longer breaths, whereas premature babies are usually given short, shallow breaths which they’re better able to cope with.

The theory behind the treatment is that it coaxes the lungs to become stronger as they do more work for themselves.

Archie started the therapy three weeks ago and his progress so far has given the family hope he will pull through.

Miss Turner, 22, said: ‘We did so much research into the treatment being done in the US and were determined to fly Archie to America to give him any chance we could.

‘But then doctors at Bristol Children’s Hospital asked me to show them my research, and they came up with a treatment similar to the one I’d heard about in America, but tailored just for Archie.

‘They’re calling it Archie’s Protocol – it’s similar to the US protocol but not quite the same.

‘We moved to Bristol three weeks ago and, after two weeks he came off the nitric (a chemical used to expand blood vessels) and in a few hours opened his eyes, for the first time in months.

‘The moment that he opened his eyes was just incredible. It has given us all hope that he can beat this.’

Bronchopulmonary dysplasia (BPD) is caused by damage ventilating machines do to the lungs of newborn babies.

Although the machines are life-saving, they can pump in more air and oxygen than the tiny lungs can handle, causing physical damage to the organs.

Most children can recover from the illness but may suffer long-term breathing difficulties, but it may cause rapid or wheezy breathing, blueish lips or stunted growth. 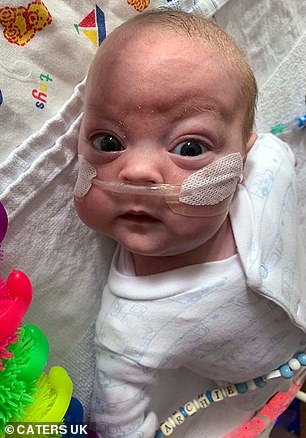 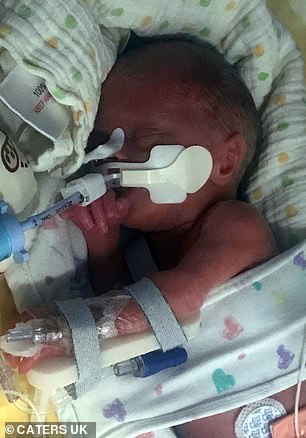 Archie is still not well enough to leave hospital or be taken off his ventilator but his parents hope he will one day grow strong and able to survive on his own. Miss Turner said: ‘We’re finally seeing some light at the end of the tunnel’ 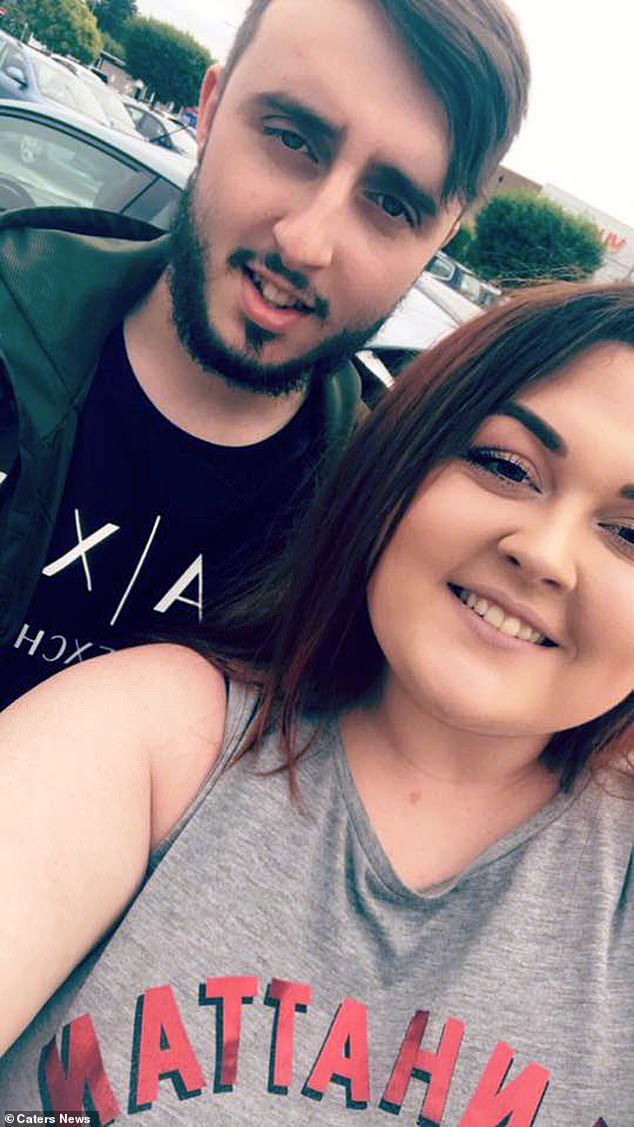 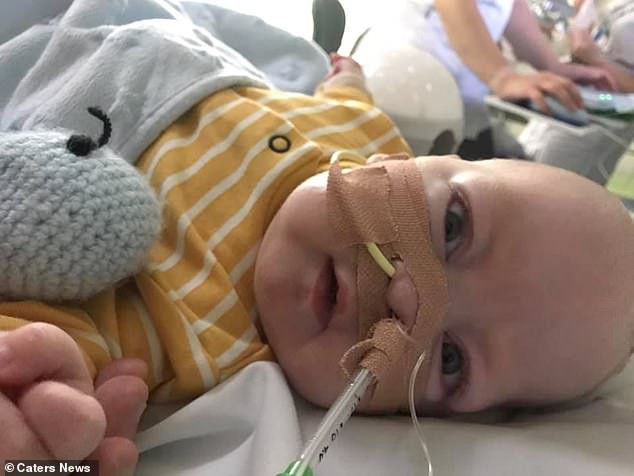 Spokespeople for Bristol Children’s Hospital, where Archie has to stay in intensive care, said: ‘We continue to provide the best possible care and have developed an individualised plan for Archie with the involvement of his family’

‘Archie’s lungs aren’t the age he is, but as long as they can continue to progress slowly, we’re on the right track.’

A University Hospitals Bristol NHS Foundation Trust spokesperson said: ‘We continue to provide the best possible care and have developed an individualised plan for Archie with the involvement of his family.

‘As an NHS organisation we have a duty to respect patient confidentiality and as such we are unable to provide any further information about Archie or his treatment.’

The family are continuing to raise money on GoFundMe for Archie’s future care and have got £3,000 of their £10,000 target.