A baby whose birthmark makes her look like ‘Batman’ is heading to Russia for treatment.

Luna Fenner, from south Florida, was born with the skin condition congenital melanocytic nevus on March 7. The disorder causes abnormally dark blemishes, usually across the face.

Her mother Carol Fenner, 35, set up an Instagram page to celebrate her daughter’s uniqueness, only for cruel trolls to call Luna a ‘monster’ who ‘should be killed’.

Doctors in the US agreed to perform laser surgery on the blemish, however, they warned the youngster would have to endure around 100 operations.

With her parents losing hope, a Russian surgeon got in touch after reading about Luna in a local newspaper.

The medic has offered to perform a pioneering treatment that is not yet available in the US. It is unclear what the procedure involves.

Luna is set to fly to Krasnodar in southern Russia tomorrow to begin tests. If successful, she is expected to have between six and eight surgeries, each costing around $25,000 (£19,977). 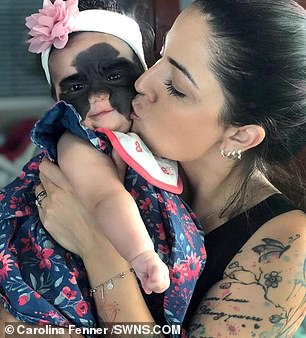 Luna Fenner (left) was born with a birthmark across her face that resembles Batman’s mask. After hitting international headlines, a Russian surgeon got in touch with her mother Carol (pictured together right) offering pioneering surgery that is not available in the US 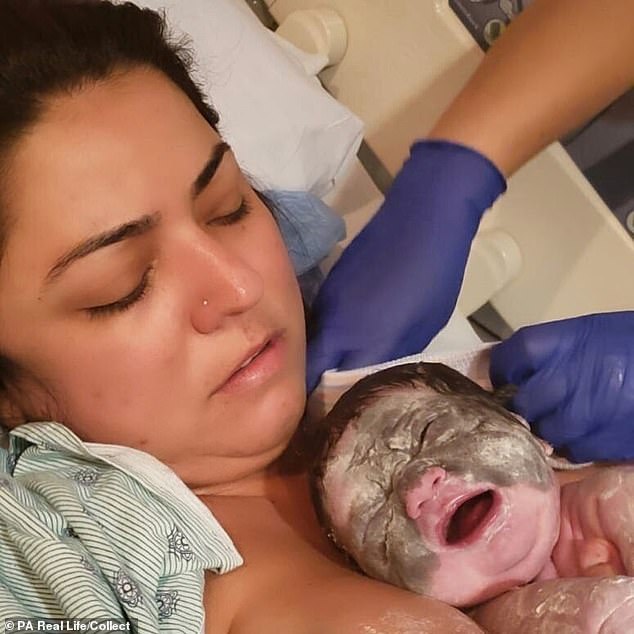 Ms Fenner did not know what the blemish on Luna’s face was when she was born on March 7 this year. The youngster was diagnosed with congenital melanocytic nevus a week later

Speaking of Luna’s upcoming treatment in Russia, Ms Fenner said: ‘They have technology there that isn’t available in the US yet.

‘In the US it would take four years for Luna to be treated, but in Russia I’m told it will be 18 months.

‘The doctors in the US kept giving me different advice, I felt so lost and didn’t know what to do.

‘Everybody thinks I’m crazy to go to Russia but I have done a lot of research and gained advice from several doctors, and I really think this is the best option for Luna right now.’

Luna was diagnosed with congenital melanocytic nevus six days after she was born.

‘It’s impossible to know before babies are born whether they will have this mark,’ Ms Fenner said.

‘We had a 4D scan, which showed that she had a lot of hair, but nothing to show she had a birthmark.

‘When Luna was first born nobody in the room knew what the condition was.’

WHAT IS A CONGENITAL MELANOCYTIC NAEVUS?

Around one per cent of babies are born with a CMN. However, they are often much smaller. In some cases, they can be hairy.

CMNs are sometimes called ‘brown birthmarks’ by medics. They get bigger as children age.

They don’t usually cause any complications but they can be itchy. There is a slight risk of melanoma, thought people with bigger CMNs face the highest risk – but it is still low.

Dr Adil Sheraz, consultant dermatologist and British Skin Foundation spokesperson, told MailOnline: ‘The word melanocytic refers to being composed of melanocytes – these are cells that produce pigment or colour.

‘A naevus is another word for a mole. A mole that is present form birth is known as a congenital melanocytic naevus (or birthmark).’

After being warned the condition raises Luna’s risk of melanoma, Ms Fenner set about searching for a doctor who could help.

‘A surgeon in Boston all told me Luna must be subjected to over 100 sessions of laser treatments,’ she said.

‘I didn’t feel comfortable with that, I wanted her to start school at the right time and feel like she could fit in with the other kids.

‘Other surgeons in New York, Chicago and Florida told me laser would be the worst thing for Luna. They all had very different opinions about what to do and when.’

Just as Ms Fenner was losing hope, she heard from the Russian surgeon and oncologist Dr Pavel Borisovich Popov.

‘He had seen Luna’s case in a Russian newspaper and said he had some options for Luna that weren’t available in the USA yet,’ Ms Fenner said.

Ms Fenner and her husband, Thiago Tavares, 32, who works in construction, decided to give it a try.

Speaking of the procedure, she said: ‘They will check her and do some exams.’

‘Dr Popov agreed for me to meet some parents of patients who have done it before.

‘My husband will stay here to pay for bills and everything.’

If the initial tests go to plan, Luna will go under the knife, with her parents footing the bill.

‘It’s been very difficult for us to raise the money,’ Ms Fenner said. ‘We still have a long way to go.’

Amid all the uncertainty over Luna’s condition, Ms Fenner admits she has not fully processed what is about to happen.

The full-time mother said: ‘I haven’t stopped to think about it yet. I think I am probably going to freak out when we get to the airplane.’ 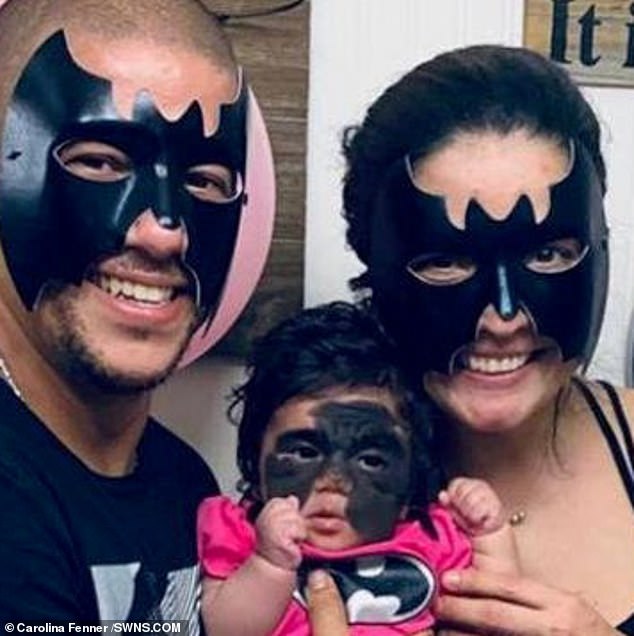 Ms Fenner and her husband Thiago Tavares celebrate their daughter’s uniqueness. They are pictured wearing Batman masks to look like Luna when she turned four months old 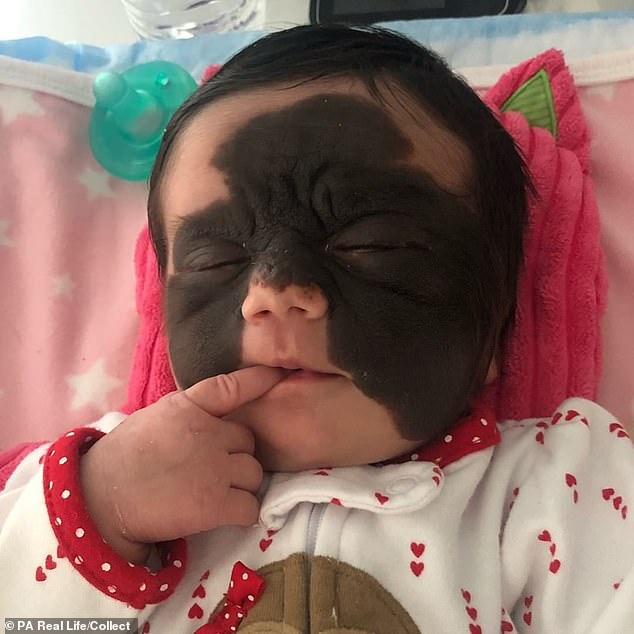 Cruel trolls have hit out at Luna on social media, calling her a ‘monster’ who ‘should be killed’

Despite her daughter’s condition, Ms Fenner insists Luna is like any other baby.

‘She just learned how to jump and she giggles all the time, she’s very calm, she doesn’t cry often,’ she said.

Ms Fenner, who is originally from Brazil, worries about her daughter’s future, particularly when she starts school.

‘I don’t want her to get bullied,’ she said. ‘People ask if it’s contagious and say really mean things.

‘One time we were at church, and a girl sitting next to us said to her mother, “Wow, look at her. What a monster”.’

‘The worst we had was a man who said, “Wouldn’t it be better if we killed her than lived so close to a monster like Luna?”,’ she said.

”At the beginning, I wanted to kill everybody. Now, I answer with the education I have regarding the condition. But sometimes I still get mad.

‘I also receive a lot of encouragement and people who tell me Luna is beautiful. When people say she looks like the Batman superhero or a butterfly that makes me happy.’

Ms Fenner hopes to be an inspiration for her daughter as she grows up.

‘I will teach her how to deal with some bad comments and bad people,’ she said. ‘She is really strong. I need to prepare her.’

The mother-of-one also believes Luna has helped her.

‘I am a better person now,’ she said. She’s stronger than me. I learn from her.’

‘She is the happiest baby I’ve seen in my life. That’s what makes me so relieved.’ 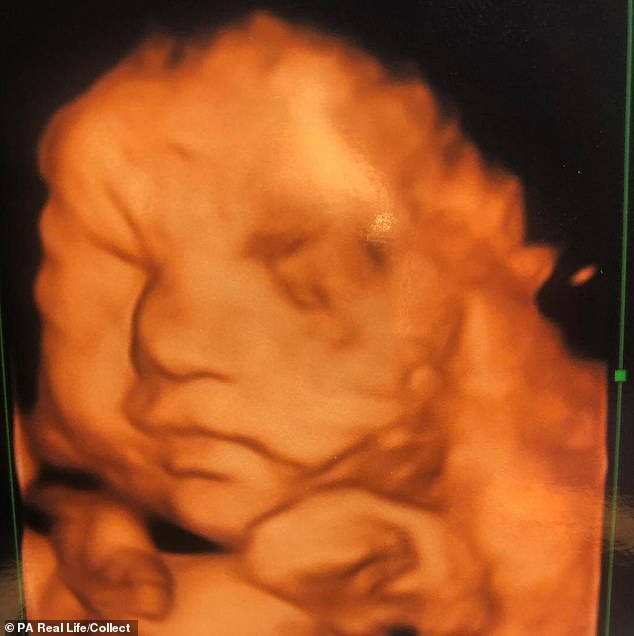 The condition cannot be diagnosed in the womb, with a 4D scan (pictured) coming back clear 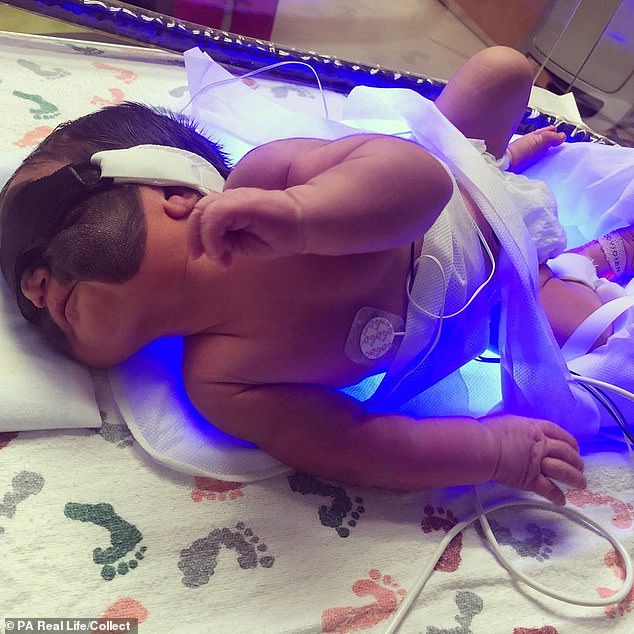 Doctors in the US agreed to perform laser surgery on the blemish, however, they warned the youngster (pictured) would have to endure around 100 operations 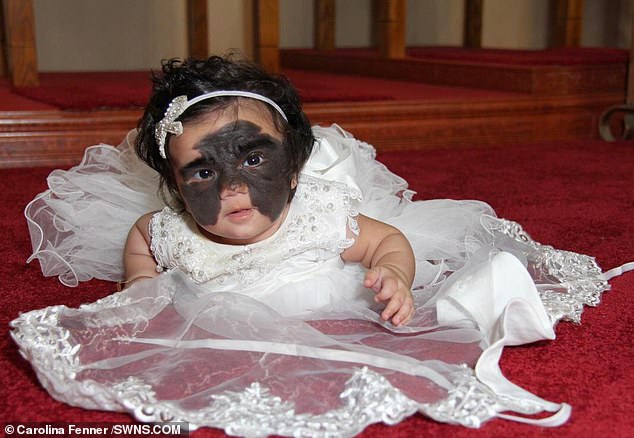