Baby Yoda memes have returned to their full glory after some were temporarily removed from the internet sparking outrage among fans of the cute new Disney character.

The mini-me of Star Wars character Yoda first appeared in the pilot episode of The Mandalorian which debuted on the launch day of Disney+ earlier this month and is known simply as The Child on the series.

But social media users coined their own affectionate nickname for the tiny green creature from the get-go and so were angered to discover that Giphy had removed all clips of the character last week.

Many vented their frustrations in the direction of Disney Studios after Vulture.com shared their own creations had been taken down and replaced with a message explaining it was for ‘copyright reasons’.

‘That was dumb Disney. I was only interested in the show and your service because of that GIF,’ Rev. Liz Bounds tweeted. ‘The fact that you had it removed tells me you care more about your money than the fans. Guess I won’t be subscribing after all.’

Another posted that pulling the viral GIFs was last thing Disney+ needed after the new subscription service experienced some teething problems on the first day, but ended in triumph thanks to Baby Yoda.

‘Really? Memes/Gifs are a huge part of online/social media culture,’ Connie tweeted. ‘With all the hiccups #Disney has experienced with their streaming service, they should be thrilled that #BabyYoda trended & a big part is due to memes.’

But image-hosting website Giphy has since explained that Disney did not demand the removal of the funny frames.

‘Last week, there was some confusion around certain content uploaded to Giphy and we temporarily removed these Gifs while we reviewed the situation,’ Giphy said in a statement on Monday.

As soon as Baby Yoda appeared on screen in the cliff-hanger of an otherwise uneventful first episode of The Mandalorian, fans predicted Disney would be cashing in on products made in the character’s image this holiday season. 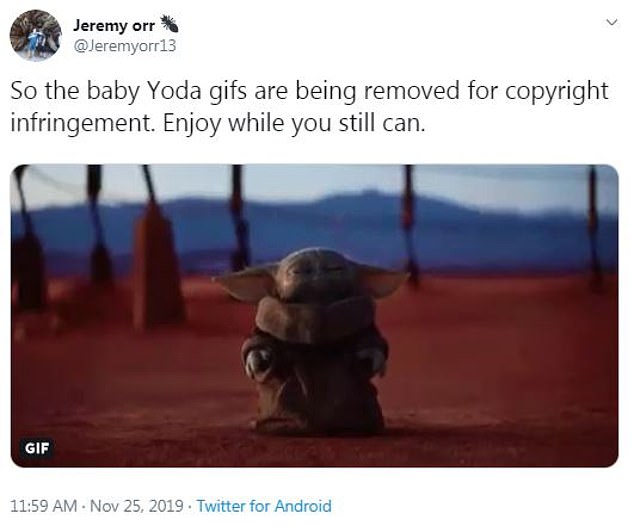 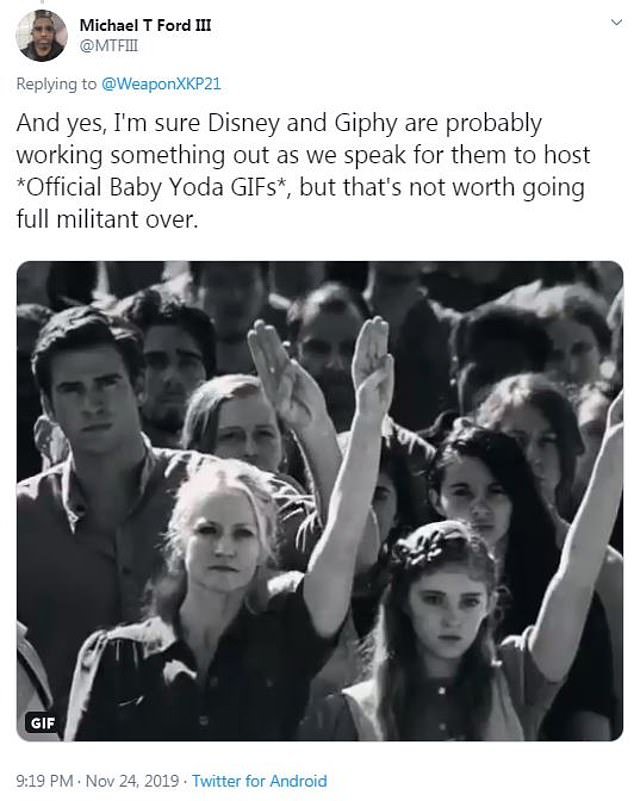 Reports followed claiming that the company was indeed planning to profit from the mania surrounding Baby Yoda and Disney was blasted for killing the joy of those who had let the large-eyed 50-year-old into their hearts.

In the meantime Disney jumped on the viral phenomenon by sharing concept art for chapter two of The Mandalorian.

The image by Christian Alzman featured the title character holding Baby Yoda who peaks over his shoulder.

But on Monday Giphy went as far as apologizing to the studio – which hasn’t even shared Baby Yoda GIFs on its own Giphy channel – as the website explained they caused the inconvenience themselves.

‘We apologize to both Disney and Vulture for any inconvenience, and we are happy to report that the GIFs are once again live on Giphy,’ the statement to BBC News continued.

Last week director Jon Favreau had fun teasing his 2 million followers with the ‘original concept’ art of the cute character in a green suit. 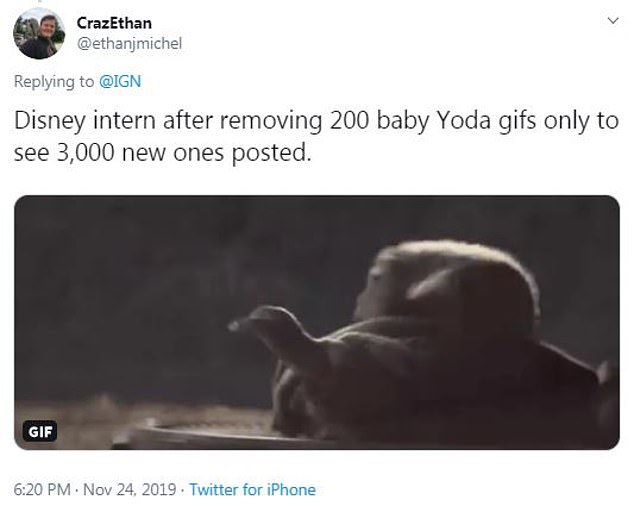 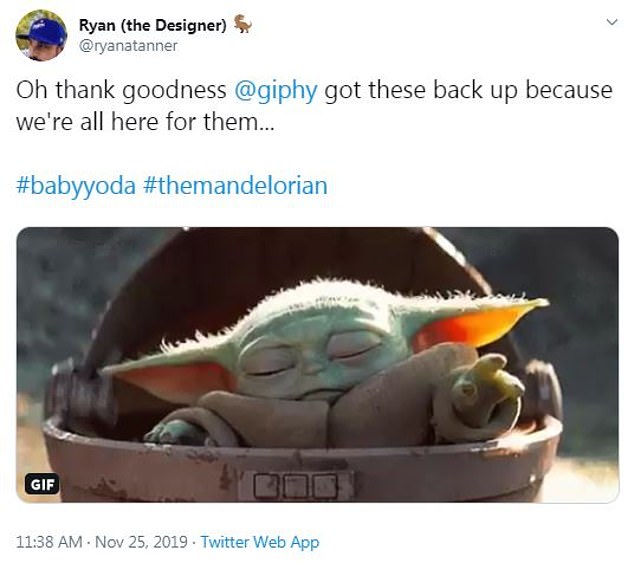 Yoda has always been seen as the old, hunched-over Jedi master in the Star Wars movies.

The petite green man was 900 years old when he died in front of Luke Skywalker in 1983’s Star Wars Episode VI: Return Of The Jedi.

It is not known if this child is related to the late master or not but even those who have laid eyes on Baby Yoda and were not previously fans of the sci-fi series couldn’t care less.

The show takes place just after The Return Of The Jedi when the Empire has fallen.

In the first episode, the Mandalorian is paid to pick up a mystery person.

With the help of IG-11 they discover who they are looking for.

It is baby that is from the same species that Yoda was from. Yoda’s species has never been named and it is not even known which planet he is from.

The only other kind from his species is Yaddle, who appeared on the Jedi Council in the prequel trilogy.

The Empire wants this little baby dead or alive but a scientist demands the child be brought back alive, possibly for experiments because the species is so rare.

It is likely that The Mandalorian will take care of this little green creature because he shoots IG-11 who wanted to harm the creature.

The Mandalorian was an orphan, it is revealed, and may have sympathy for the baby.