A Babylonian retelling of Noah and the Ark on a 3,000-year-old clay tablet could be one of the oldest example of fake news, says a Cambridge academic.

In the engraved scripture, Ea the Babylonian god appears to be mincing his words by using a double-meaning to suggest to Noah that he tell his helpers ‘food will rain from the skies’ if they help build the ark.

Dr Martin Worthington, a leading expert on the Babylonian language, discovered the trickery on the 11th tablet of Gilgamesh, dating back to 700BC and giving the Babylonian account of the flood.

The 11th tablet of Gilgamesh, dating back to 700BC and giving the Babylonian account of the flood in cuneiform

Although Noah has a different name in the scripture, discovered by assyriologist George Smith in 1872, it is largely accepted to be the same story as Noah and the Ark in the bible, Genesis, but with fewer gods.

Translated the cuneiform script ‘ina lilâti ušaznanakkunūši šamūt kibāti’ reads along the lines of at dawn there will be kukku cakes’, but can equally mean ‘at dawn, he will rain down upon you darkness’, reports The Telegraph. 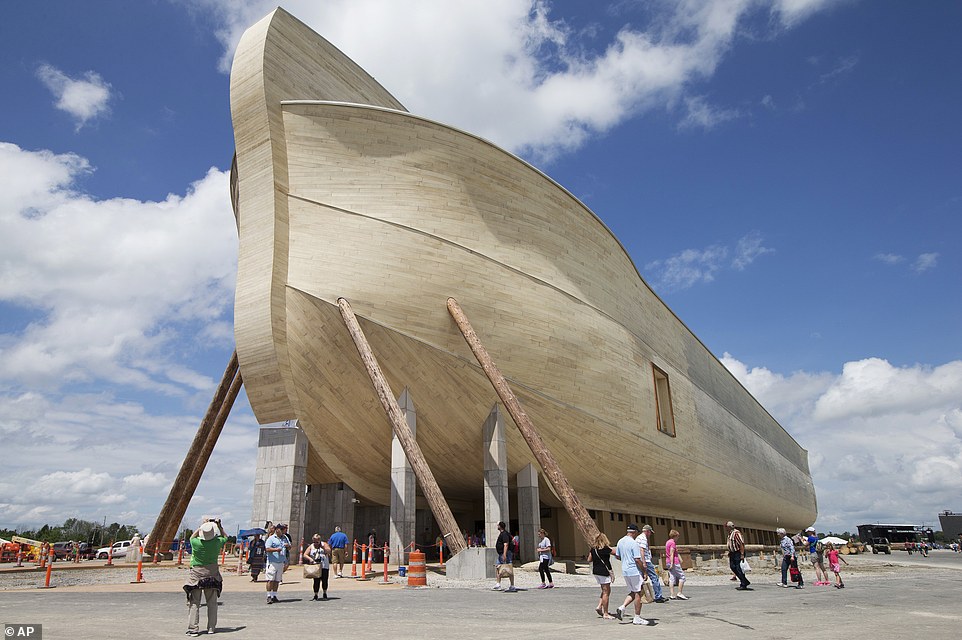 Visitors pass outside the front of a replica Noah’s Ark at the Ark Encounter theme park in Grant County, northern Kentucky, U.S. in July

Dr Worthington told The Telegraph: ‘Ea tricks humanity by spreading fake news. He tells the Babylonian Noah, known as Uta–napishti, to promise his people that food will rain from the sky if they help him build the ark.

Cuneiform: Up to 1000 characters that formed world’s first writing

Although cuneiform is considered by some historians to be the oldest example of a written language, in fact the Cuneiform writing system is not a language and does not have an alphabet or letters.

Instead it relies on 600-1,000 characters to spell words, or part of a work, phonetically on the page.

The languages written in this ancient system were most commonly Sumerian and Akkadian, originating from ancient Iraq – but it was also used for a dozen others.

As a versatile phonetic writing system it could be used effectively to spell Chinese or English today.

Cuneiform is thought to have first been developed in 3400 BC.

Adding: ‘Once the Ark is built, Uta–napishti and his family clamber aboard and survive with a menagerie of animals. Everyone else drowns.

‘With this early episode, set in mythological time, the manipulation of information and language has begun. It may be the earliest ever example of fake news.’

Dr Worthington suggests that Ea, the god’s part in the story, was all about self interest – as Babylonian’s believed gods needed to be fed by humans to survive.

The baked clay tablet is kept at the British Museum and could have been inscribed by scholar of the time Sîn-lēqi-unninni, claims the academic.

It is thought to be the most famous example of cuneiform text and tells of how the gods conspired to send a deadly flood to earth – except one, Ea, who told Utu-napishtim of the plan.

Dr Worthington believes a tale similar to the one widely known now, with animals and birds taken on board until the rain stops then released, was ‘finalised’ in around 1,200 BC, reports The Telegraph.

Babylonia was an ancient state and cultural area based in central-southern Mesopotamia, now present-day Iraq, that spoke Akkadian.

WHAT WAS ANCIENT MESOPOTAMIA?

A historical area of the Middle-East that spans most of what is now known as Iraq but also stretched to include parts of Syria and Turkey.

The term ‘Mesopotamia’ comes from Greek, meaning ‘between two rivers’.

The two rivers that the name refers to are the Tigris river and the Euphrates.

Unlike many other empires (such as the Greeks and the Romans) Mesopotamia consisted of several different cultures and groups.

Mesopotamia should be more properly understood as a region that produced multiple empires and civilisations rather than any single civilisation.

Mesopotamia is an ancient region of the Middle-East that is most of modern-day Iraq and parts of other countries. They invented cities, the wheel and farming and gave women almost equal rights

Thought to be responsible for many early developments, it is also credited with the invention of the wheel.

They also gave the world the first mass domestication of animals, cultivated great swathes of land and invented tools and weaponry.

As well as these practical developments, the region saw the birth of wine, beer and demarcation of time into hours, minutes, and seconds.

It is thought that the fertile land between the two rivers allowed hunter-gathers a a comfortable existence which led to the agricultural revolution.

A common thread throughout the area was the equal treatment of women.

Women enjoyed nearly equal rights and could own land, file for divorce, own their own businesses, and make contracts in trade.