The Bachelor creator Mike Fleiss reached a $10million settlement with his estranged wife Laura Kaeppeler last month, but she has reportedly taken their son out of state and refuses to communicate with him.

In July, Fleiss, 55, awarded Kaeppeler, 31, the financial settlement and they defined custody terms for their four-year-old son, Ben.

As result of Kaeppeler dropped domestic violence claims against Fleiss and a restraining order she was granted against the TV executive was also terminated.

But now, according to TMZ, Kaeppeler has flown to Hawaii with their son and isn’t communicating with Fleiss despite him paying her the $10million on August 4.

Fleiss has reportedly not been able to get in touch with Kaeppeler or his son since she left.

Mike Fleiss reached a $10M settlement with his estranged wife Laura Kaeppeler last month, but she has reportedly taken their son out of state and isn’t communicating with him 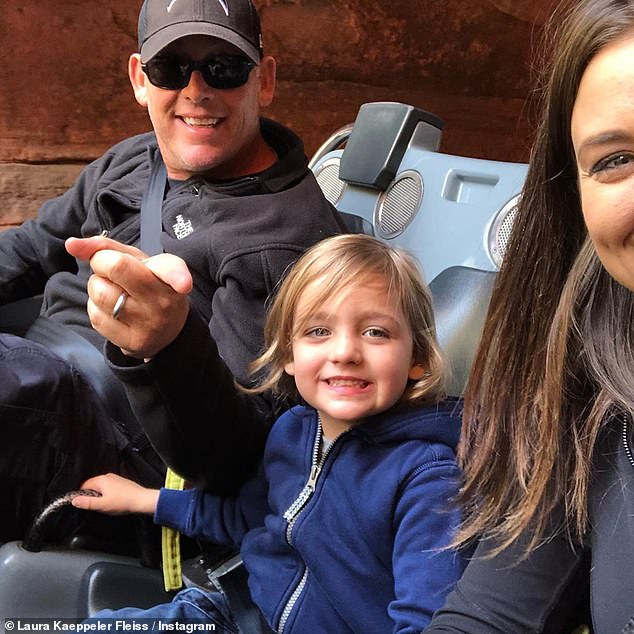 In July, Fleiss, 55, awarded Kaeppeler, 31, the financial settlement and they defined custody terms for their four-year-old son, Ben (pictured). As result of Kaeppeler dropped domestic violence claims against Fleiss and a restraining order was also terminated

Kaeppeler is allowed to live in Hawaii, according to their agreement, but she was supposed to meet with psychologist Stan Katz to figure out effective co-parenting between her and Fleiss.

However, she has not set up that appointment. According to TMZ, Fleiss was supposed to fly to Hawaii on Tuesday to get Ben for custodial time, as per their agreement, but he hasn’t been successful in getting Kaeppeler to communicate with him.

The news site also obtained Kaeppeler’s response, which was filed by her attorney Samantha Spector.

Those documents claim that Fleiss has ‘chipped away at Laura’s self-esteem, telling her that she was fat and lazy and calling her names like “a low rent gold-digger” and a “$50,000 whore.”‘

According to Spector, her client has followed the settlement agreement and has participated in three telephone sessions with Katz.

Insiders told the outlet that the $10million sum exceeded monies Kaeppeler would have gotten in a prenuptial agreement they had hammered out prior to their April 6, 2014, wedding in Malibu that the ABC show’s Chris Harrison presided over.

Fleiss earns an estimated $20million to $30million annually from the romance reality show, the outlet reported, previously estimating his net worth as $100million.

Kaeppeler, who is nearly three months pregnant, told the court that Fleiss had physically attacked her amid an argument over the pregnancy, as he told her to get an abortion, according to the outlet. 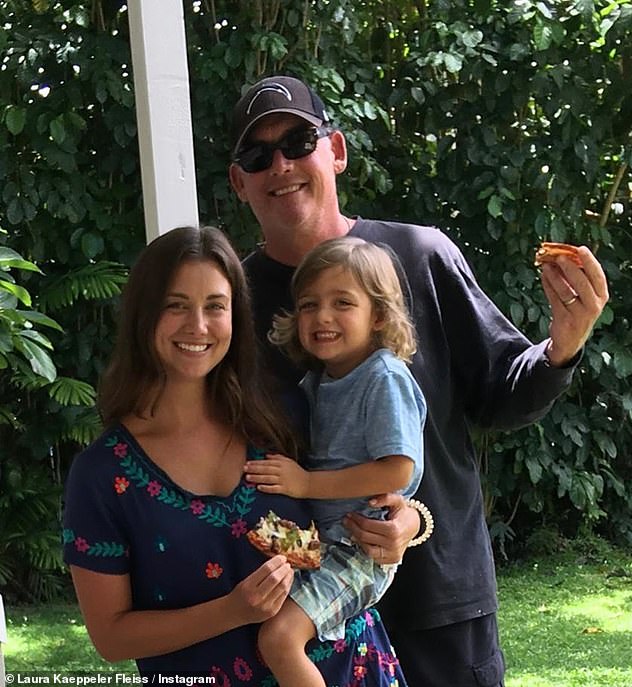 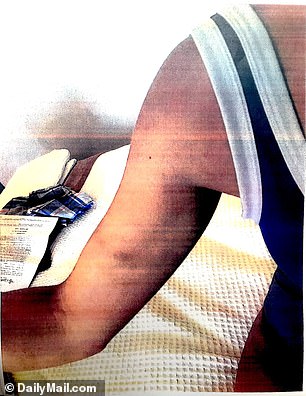 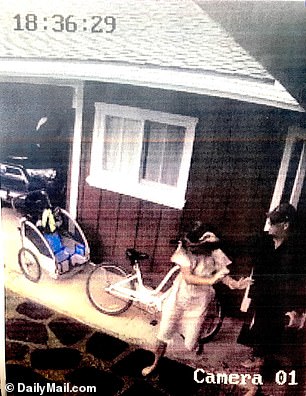 Disturbing: Kaeppeler provided evidence of physical abuse, showing bruises (L) and security footage of the Bachelor creator being physically abusive with her

In legal documents in the case, according to The Blast, Kaeppeler, a one-time Miss Wisconsin who won the 2012 Miss America pageant, said Fleiss’s attack on her took place at a home the couple shared in Hawaii earlier this month.

She said that on July 6, Fleiss physically grabbed her and pinned her up against a wall when with a threat to ‘punch her in the face,’ Variety reported, citing court documents.

‘While we were at our house in Kauai, Mike demanded that I get an abortion,’ Kaeppeler said in her bid for an emergency restraining order.

‘Our son Ben was in the house, seated in another room nearby. Mike told me, “If you have an abortion, then we can just go back to the way we were.”‘

Kaeppeler said in the documents that the latest pregnancy was a significant cause of strife in the marriage.

‘While Mike has frequently been verbally abusive towards me during our marriage, in recent weeks, he has become enraged, due to the fact I am pregnant with our second child,’ she said.

‘Mike told me many times that he did not want us to have a second child.

She continued: ‘He also repeatedly told me throughout our marriage, and prior to our marriage, that he knew he would “have to have” one child with me because I was 26 years old when we got married, did not yet have any children, and he knew I wanted to have a family.

‘Mike, however, being 55 years old, did not want to have more than one child together.’

Fleiss, a native of Fullerton, California, was previously married to Daphne Alexandra Vorbeck from 1987–2012.