They claimed to be feeling remorseful about their antics on The Bachelor, during a tearful interview last month.

But ‘mean girls’ Cat Henesey, 25, and Alisha Aitken-Radburn, 26, appear to be back to their old ways after mocking the show ahead of the finale.

The controversial pair took to the official Bachelor Instagram page on Tuesday and posted a sarcastic comment on a video of Nick ‘The Honey Badger’ Cummins.

They’re back! Bachelor ‘mean girls’ Cat Henesey (centre) and Alisha Aitken-Radburn (left) mock the show ahead of finale after posting a sarcastic comment on video of Nick ‘The Honey Badger’ Cummins

The video caption read: ‘It’s GRAND FINALE WEEK! Who will Nick choose? Get ready for the most heart-stopping end to a series you’ve ever seen – #TheBachelorAU 7.30 Wednesday & Thursday on TEN.’

Cat wasted no time tagging fellow show villains Alisha and Romy Poulier, 30, in the comments section, which prompted a response from Alisha that was dripping with sarcasm.

‘As long as everyone had fun that’s the most important thing,’ Alisha wrote. 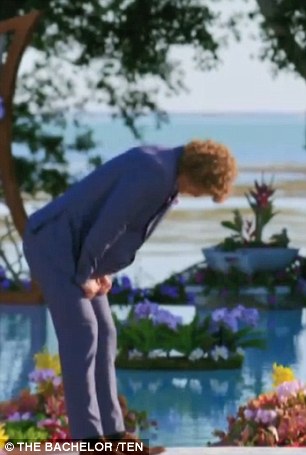 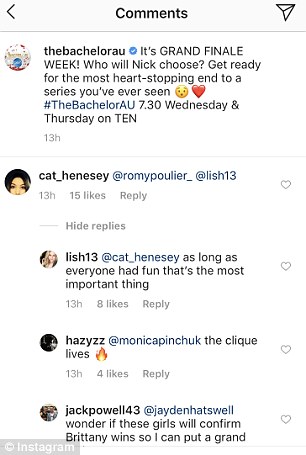 Sarcasm: Cat wasted no time tagging fellow show villains Alisha and Romy Poulier, 30, in the comments section, which prompted a response from Alisha that was dripping with sarcasm. Pictured left: Nick Cummins during the finale

It comes one month after Cat and Romy appeared teary and fragile on The Project, while offering an apology to viewers.

‘We do apologise for offending people and we do regret some of the things we did in there,’ said Cat.

‘We just don’t condone bullying, it’s not in either of our nature,’  Romy added. 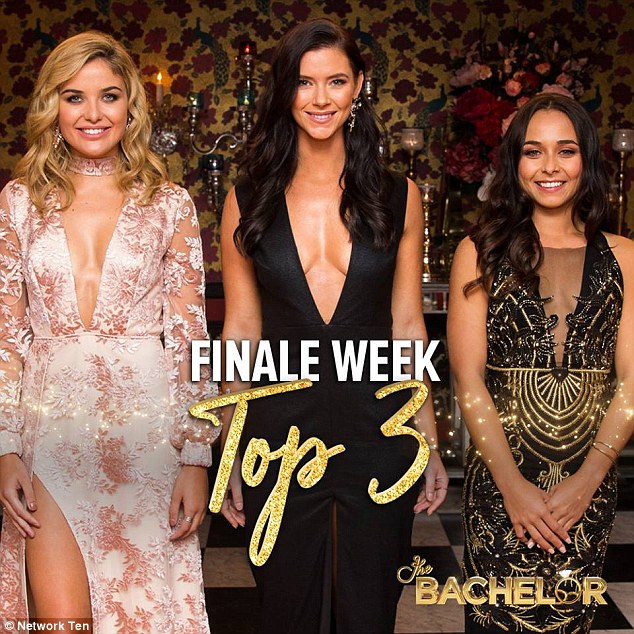 However, it appeared The Project’s audience may not have found the sentiment sincere, with audible laughter heard in the background.

Continuing to appear contrite, Romy then claimed: ‘The last couple of episodes have certainly been quite shocking and questionable and uncomfortable to watch at the best of times, that’s for sure’.

The two both agreed that their behaviour was ‘absolutely’ worse than they realised. 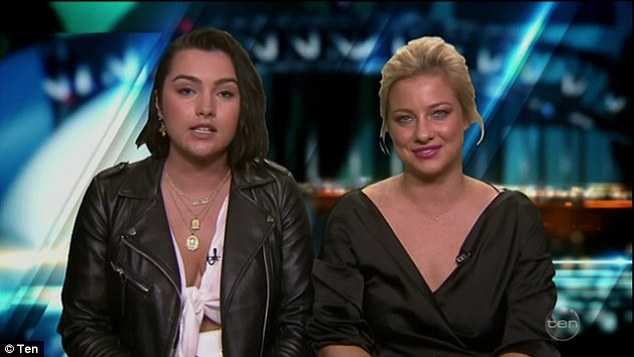 ‘We just don’t condone bullying’: It comes one month after Cat and Romy appeared teary and fragile on The Project, while offering an apology to viewers

An emotional-looking Cat then revealed she’s been attacked by online trolls since the show went to air.

‘I’m getting death threats, I’m getting told to kill myself, all sorts of insults to my appearance but yes, we have got a great support network and we have got each other, so it’s definitely been a challenging week, that’s for sure,’ she stated.

Last month, Cat took a swipe at Nick’s appearance while speaking to The Daily Telegraph.

‘I feel like it is more of a prawn situation,’ she sniped, using a slang term that refers to a person with a good physique but an unattractive face.

The terms derives from the concept of eating the body of a prawn and throwing away the head. 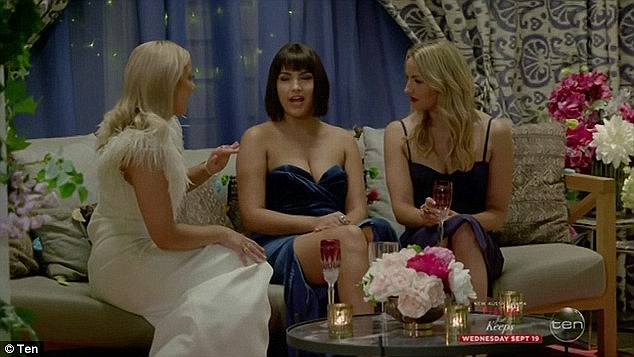 Shocking: The ‘mean girl’ trio badgered Tenille with questions about her date with Nick before blasting her as a ‘hypocrite’