Former Bachelor star Monique Morley is the latest public figure to be hospitalised after getting the Pfizer covid vaccine.

On Friday, the 29-year-old revealed that over the past week she had been dealing with ‘rare side effects’ after getting her first vaccination.

In a series of lengthy Instagram posts, the former lingerie designer told her followers that she experienced ‘pericarditis and unknown uncontrollable fits’ after her first jab.

Her story: Monique Morley revealed to fans on Saturday she’s been ‘dealing with rare side effects’ over the past week after her getting her first dose of the Pfizer Covid vaccine

Pericarditis is an inflammation of the sac-like tissue that surrounds the heart that holds it in place and helps it function.

She made it clear that she was ‘not anti-vax or pro-vax,’ insisting that she is ‘open-minded’ and ‘pro personal choice, whatever that may be.’

‘I’m pro being kind and considerate, and not trolling and bullying on those who… just don’t agree with you.’

The reality TV said of her experience: ‘I was told by some doctors my symptoms weren’t from the vaccine, simply because they weren’t “usual” and not to report it and not to go to hospital. 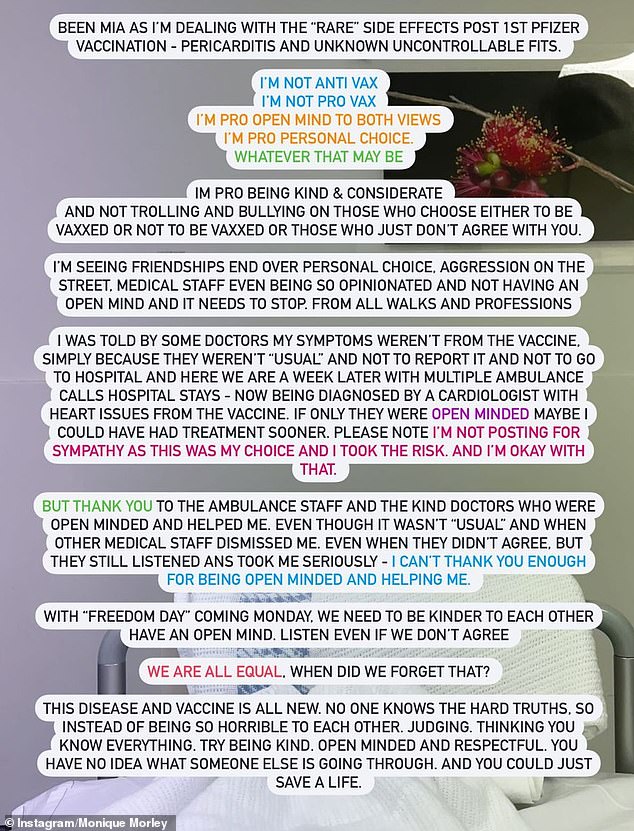 Experience: In a series of lengthy Instagram posts, the former lingerie designer told her followers that she experienced ‘pericarditis and unknown uncontrollable fits’ after her first jab

‘Here we are a week later with multiple ambulance calls, hospital stays – now being diagnosed by a cardiologist with heart issues from the vaccine.

‘If only they were open minded maybe I could have had treatment sooner.’

The former Bachelor star wrote that she wasn’t looking for sympathy and understood that she took a risk by choosing to get the vaccine, and added: ‘I’m okay with that.’ 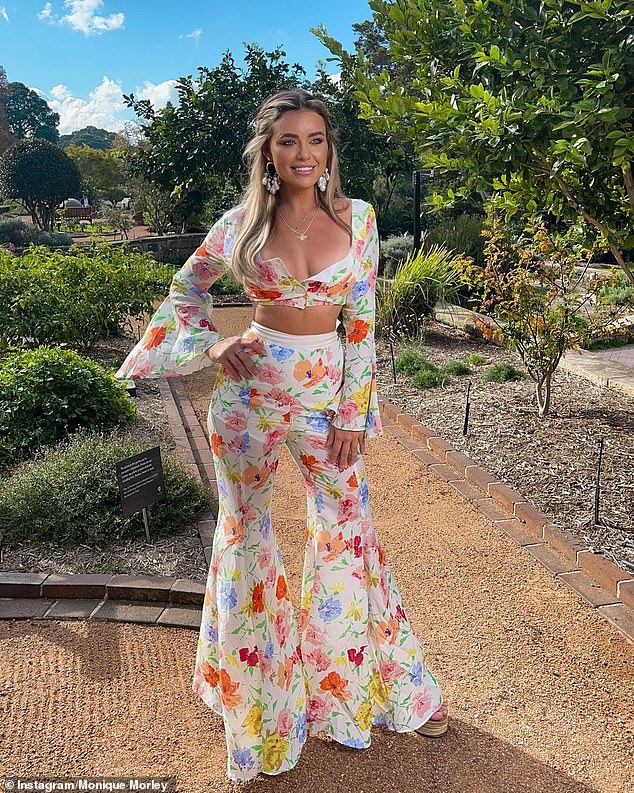 She thanked the ambulance workers and doctors who helped her and took her seriously when she was dismissed by other medical staff.

Monique said that with the coming ‘freedom day’, she hopes to people will treat each other with kindness and have an open mind even with differing opinions.

‘You have no idea what someone else is going through, and you could just save a life,’ she said. 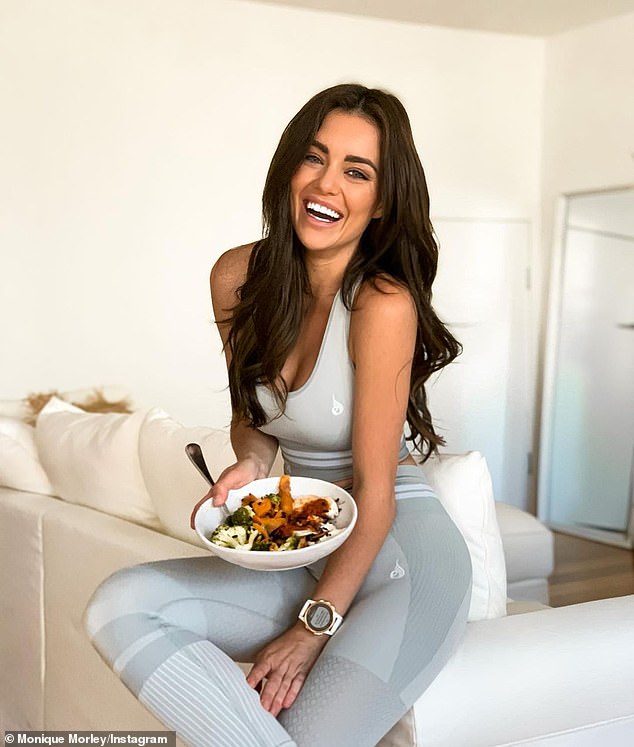 Healthy: Monique, who is known for having a healthy and active lifestyle, encouraged people to make an ‘informed decision’ about getting vaccinated, but insisted side effects are ‘rare’

In a follow up post, Monique thanked fans for their concern and said the adverse reactions she experienced ‘do not happen to the majority’.

The reality TV added that she hopes her story doesn’t frighten others to get vaccinated, but rather raise awareness to help people make an informed decision for them.

Monique shot to fame on the seventh season of The Bachelor, before moving into a new career as a beauty and fitness influencer. 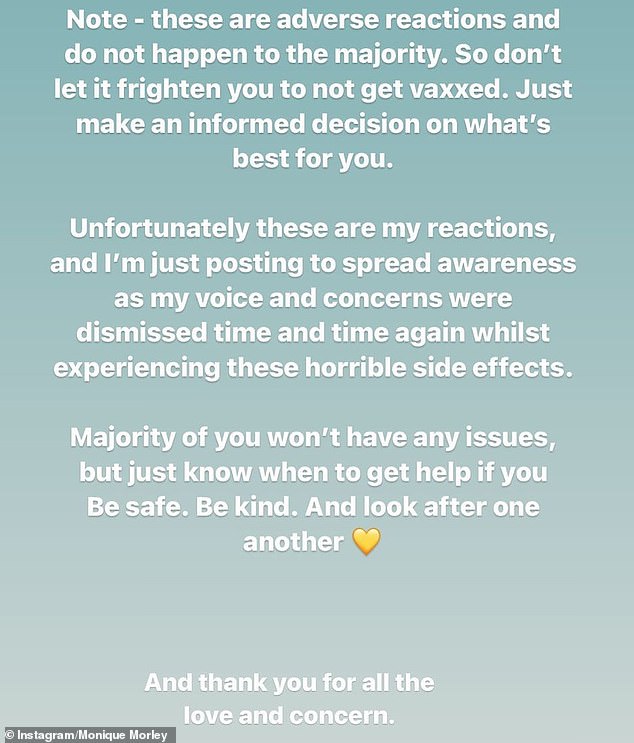 Informed: In a follow up post, Monique thanked fans for their concern and said the adverse reactions she experienced ‘do not happen to the majority’

British data released in August found the rate of pericarditis was 3.8 cases per 1 million doses of the Pfizer shot.

By July 8, the TGA was notified of 50 cases of pericarditis in Australia as a result of 3.2 million Pfizer doses.

Monique isn’t the only public figure to get pericarditis following their first dose of the Pfizer vaccine.

Seven News reporter Denham Hitchcock suffered from the heart condition after getting jabbed back in August. 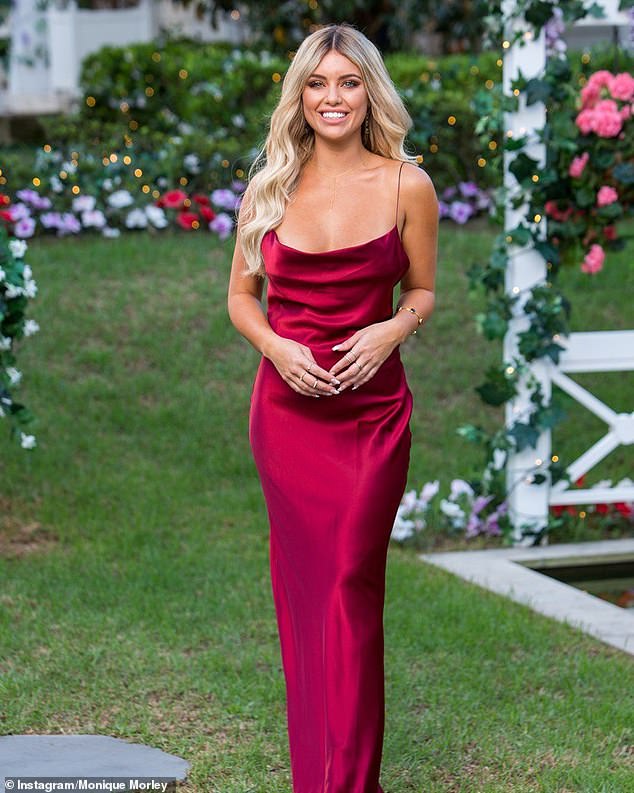 Flashback: Monique shot to fame on the seventh season of The Bachelor, before moving into a new career as a beauty and fitness influencer

In an Instagram post at the time, Hitchcock claimed the condition was caused by his first shot of the Pfizer vaccine, and called on the government to ‘keep your damn promise’ on opening up the world.

‘I’ve battled over whether to send this post from hospital or not. But decided after 27 years of being a journalist who’s primary goal is to discover the truth – it would be hypocritical not to,’ he wrote on Instagram.

‘I’m NOT anti-vax. But I’m really not pro-vax either. I’m pro-choice – and pro-information to make that choice.

‘Probably a little late to hospital – but here I am – diagnosed with pericarditis – or inflammation of the heart due to the Pfizer vaccine.’ 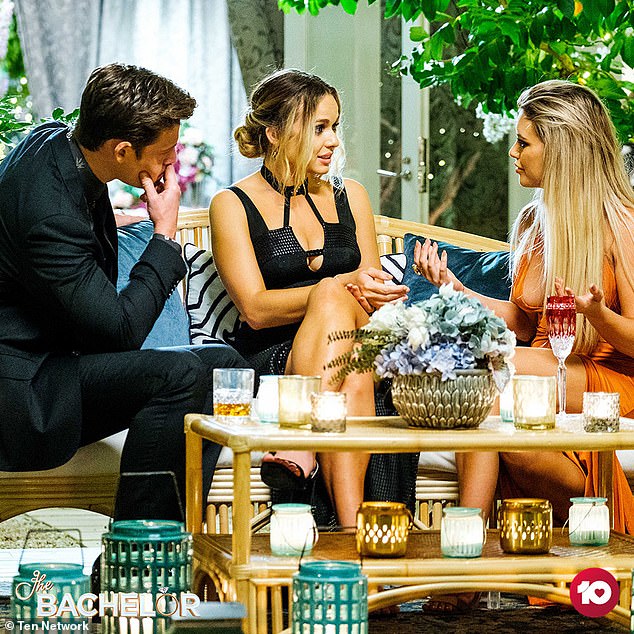 Reality TV: Monique rose to fame on The Bachelor, vying for the heart of astrophysicist Matt Agnew. Pictured left to right is Matt, vaccine advocate Abbie Chatfield and Monique

Hitchcock made the post from his hospital bed in Gold Coast University Hospital on August 26, 25 days after he received the shot.

He said at first he was experiencing a racing heart, pins and needles, and dizziness, but continued on thinking they were normal side effects.

After three weeks he was still suffering from severe symptoms, including sharp chest pain, chills, and the dizziness had become extreme. 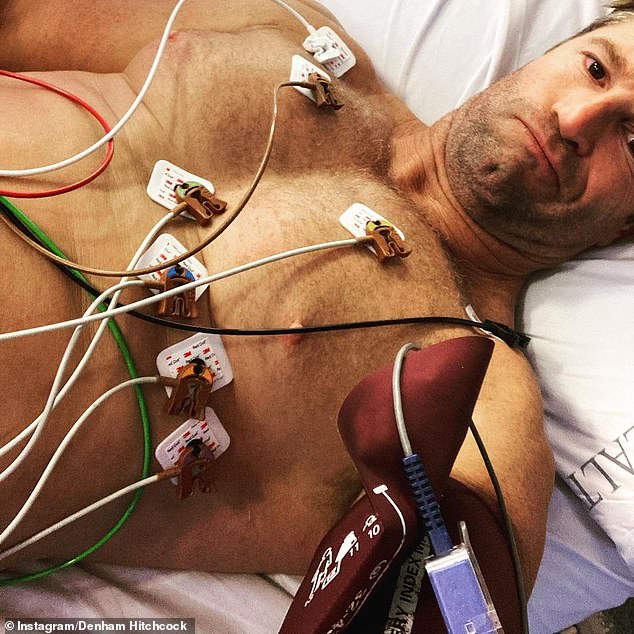 Hospitalised: Seven News reporter Denham Hitchcock also suffered from the heart condition as an extremely rare side effect of the Pfizer coronavirus vaccine

Hitchcock, who’s Instagram is littered with pictures of him being active, participating in extreme sports and showing off his trim figure, said the condition was not being spoken about enough.

‘Since being here I’ve contacted health professionals I know in Sydney and while It’s rare – it’s certainly not isolated,’ he said.

‘One hospital has had well over a dozen cases like me.’

Pericarditis and myocarditis have been observed in an extremely small number of people after they receiving mRNA vaccines, of which Pfizer is one.

The cases were disproportionately men and teenagers under the age of 30 after their second dose of the jab. 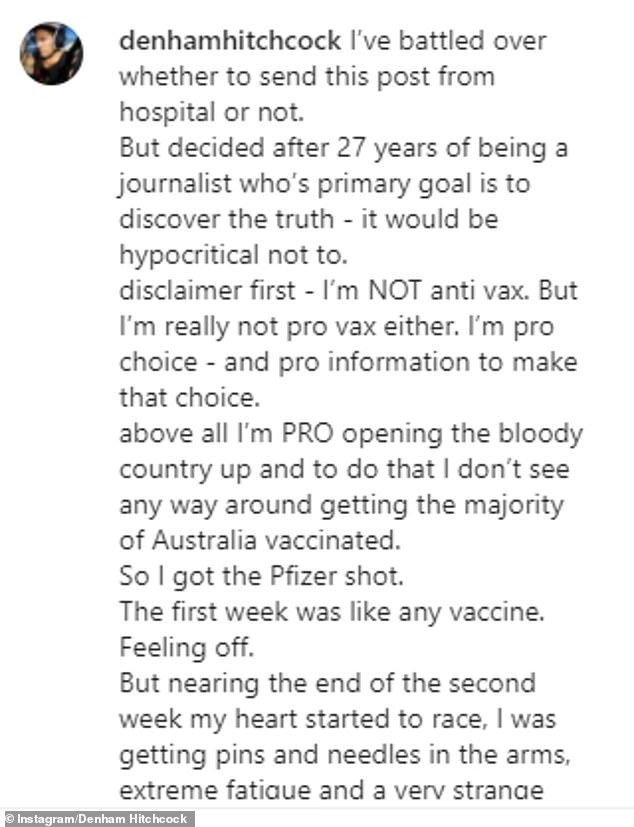 Side effects: Hitchcock claimed the condition was caused by his first shot of the Pfizer vaccine

Lee Henderson, the ex-husband of radio personality Jackie ‘O’ Henderson, was also hospitalised with the rare side effect after his second Pfizer jab.

In September, Jackie, who was married to Lee for 18 years, gave listeners an update on Lee’s condition on The Kyle and Jackie O Show.

‘He’s not good at all, actually,’ Jackie told her co-host Kyle Sandilands on September 14.

Jackie explained that she’d offered to give Lee her full support during his recovery.

‘I said, ‘Listen, whatever you need. I’m here. You know?” Jackie explained. 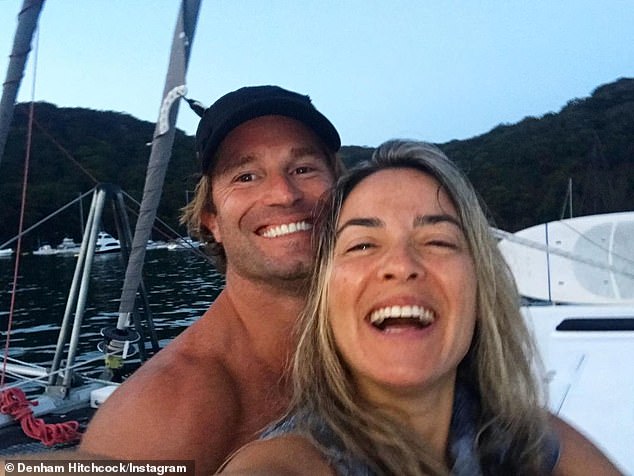 Hitchcock, who’s Instagram is littered with pictures of him being active, participating in extreme sports and showing off his fit figure

Professor Jason Kovacic, the Executive Director of the Victor Change Cardiac Research Institute, told Daily Mail Australia at the time that pericarditis can happen after Covid vaccines but only in ‘very, very rare’ cases.

‘COVID-19 vaccines can cause specific heart problems such as myocarditis and pericarditis, and particularly in males less than 30 years of age – but only very, very rarely,’ Professor Kovacic said.

‘These complications have been reported in just a handful of people around the world and to the best of our knowledge most of them have recovered.’

Professor Kovacic said the risks of getting heart conditions as a result of Covid are much higher, and that the vaccine is the best safeguard to preventing these illnesses.

‘In contrast, the risk of having some form of heart complications if you contract COVID-19 is about 1000 times higher at ~5-10%,’ he said.

‘A very recent observational study has shown that young males infected with the virus are up to six times more likely to develop myocarditis as opposed to those who received the vaccine.

‘COVID-19 vaccines are incredibly safe and incredibly effective at preventing people from getting seriously unwell with COVID-19 infection.

‘The benefits for being vaccinated far outweigh any risk to the heart, especially given the highly infectious nature of the Delta variant which is now affecting an increasing number of young people.’ 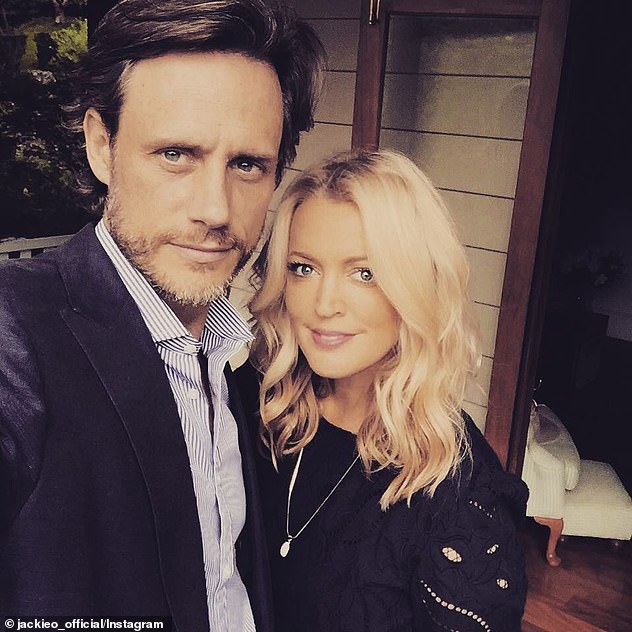 Another one: Jackie ‘O’ Henderson’s ex-husband Lee was also hospitalised with pericarditis after his second dose of the Pfizer vaccine