Back and neck pain are at a five-year high in Britain, with sedentary lifestyles believed to be to blame.

More than two in five people now suffer back and neck pain, which affects 12 per cent more of us than a year ago.

The British Chiropractic Association says 70 per cent of people in the Midlands experience back and neck pain before they are 30.

Back and neck pain are at a five-year high in Britain, with sedentary lifestyles believed to be to blame

The rise across the country is put down to office work, more time spent hunching over smartphones and tablets and staying still for too long without moving.

Catherine Quinn, president of the British Chiropractic Association, said: ‘Our bodies are designed to move, so back and neck pain can emerge when you stay in one position for long periods of time.

‘These days we are using technology more and more throughout the day, accompanied by long periods of sitting in one, often uncomfortable position – glued to our smartphone or tablet, messaging friends or scrolling through social media.

‘This is the modern world, and whilst there really is no “perfect posture”, if we think about how we position that laptop or how often we take a digital break from our mobiles to stretch out, we will be able to combat this modern cause of back pain.’

The latest figures are based on a study of more than 2,000 adults. While just 30 per cent of those questioned in 2016 reported suffering neck and back pain, that rose to 44 per cent this year, up from 32 per cent in 2017. 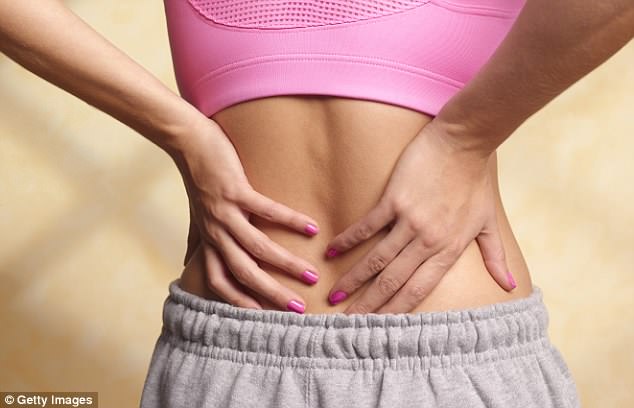 The results show people in Northern Ireland are most likely to complain of neck and back pain, which is most regular in people living in Scotland

The results show people in Northern Ireland are most likely to complain of neck and back pain, which is most regular in people living in Scotland.

People living in the south east of England are least likely to suffer, and those in Yorkshire and Humber are most likely to blame housework or DIY as the trigger for their pain.

Lifting and carrying are cited as being the most common causes of neck and back pain, but these activities can be very safe if people are active and do not try to lift anything too heavy.

Dr Quinn said: ‘Building strength and flexibility through regular movement, stretching and moderate exercise also means that you can prepare your body to deal with more strenuous activities such as lifting and carrying.’