Back in the swing: MG went bust – but it’s been reborn and is thriving

Legendary British sports car marque MG ran a series of eye-catching adverts for their cars in the 1960s and 1970s which today might raise more eyebrows than they did smiles back then.

With a nod to the Swinging Sixties, one set of adverts played on a double-entendre about the compact nature of MG sports cars by teasing that despite being a relatively tight squeeze: ‘You can do it in an MG’.

Another series of adverts targeted the high proportion of women buying for themselves or being driven in the rakishly sporty, but still affordable MGs by warning, in a mock disapproving manner: ‘Your mother wouldn’t like it’.

Bright spark: The new fully electric MG ZS EV which now offers up to 273 miles of electric range (up from 163 miles)

In today’s more sober, prudishly puritanical and judgmental age, such advertising would likely be deemed inappropriate before you could say ‘cancel culture’.

But back then, they captured the spirit of the age — and of their time.

MG was a company that produced fun, affordable sports cars that ordinary people on a tight budget could — and still do —aspire to. Along with the Lotus Elan, they inspired Mazda to produce its best-selling MX-5 two seater.

With tyre pressure lowered and windscreen cut down, an MG was even used by an enterprising Berliner to smuggle his girlfriend (hidden in the boot) out of Communist East Berlin — by accelerating hard and driving under the Berlin Wall checkpoint barrier at speed.

I confess to being a huge fan. As a young trainee reporter working in Coventry in the 1980s I needed practical wheels, but with flair. 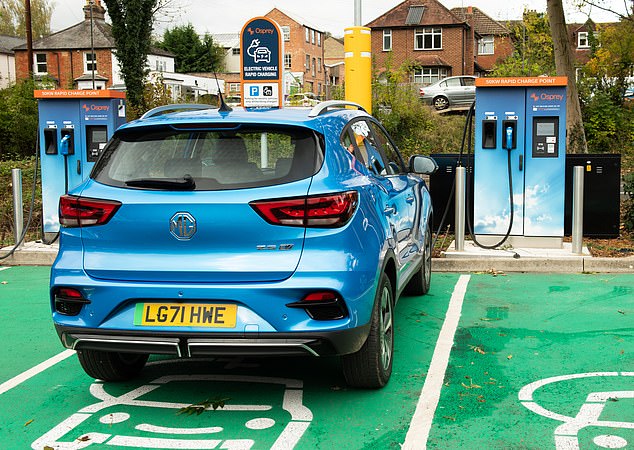 A Morgan (which a wealthy friend drove) was completely out of the question and I couldn’t quite stretch to an Alfa Romeo Spider.

I traversed Continental Europe in it and kept it for decades. But sadly, I let it fall into disrepair.

Today, MG is in Chinese hands, owned by the Shanghai Automotive Industry Corporation (SAIC). Yet in one key sense it has embraced the spirit of the original: it is producing affordable, fun hatchbacks, estates and SUVs — including electric models — that ordinary people on modest budgets can aspire to.

With more than 140 UK dealerships and offering a seven-year warranty, MG says that it is ‘the UK’s fastest growing car brand’, with a six-car line up.

In September this year, MG broke through its 2020 sales record and continued apace, with a record 25,290 cars sold so far this year. 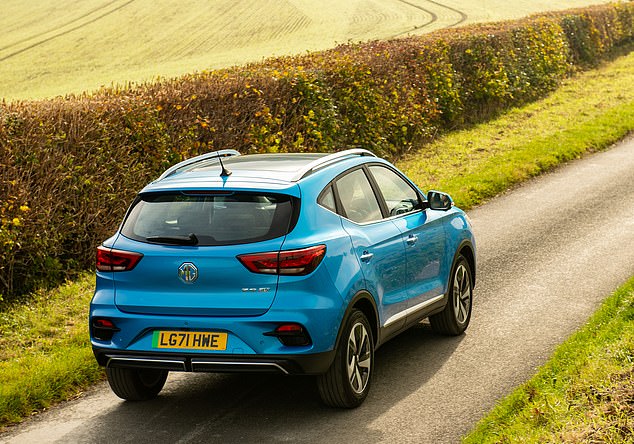 The company has its MG Advanced Design Centre employing about 40 people in Marylebone, but manufacturing is now abroad, including China and Thailand.

The latest launch is the new second generation all-electric MG ZS EV which now offers up to 273 miles of electric range (up from 163 miles).

Six of the best from MG’s history 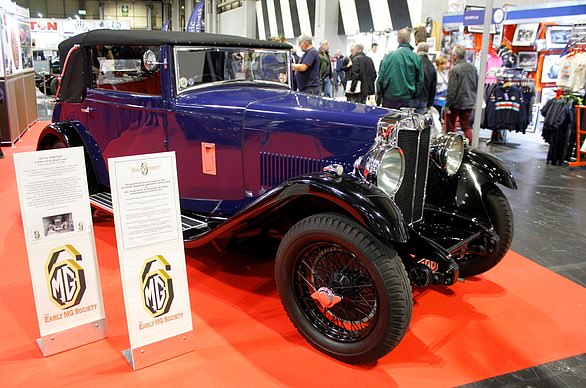 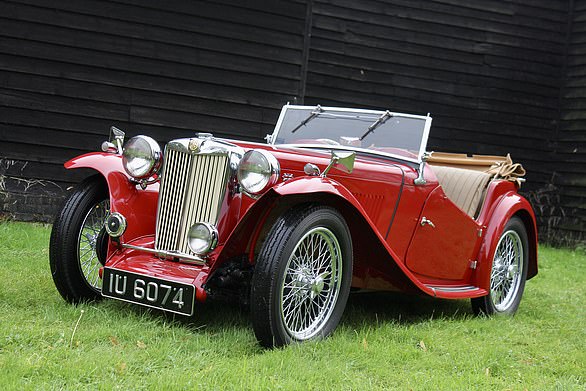 MG TC: Popular with British-based American GIs, the MG TC became the catalyst for an export boom to the U.S. 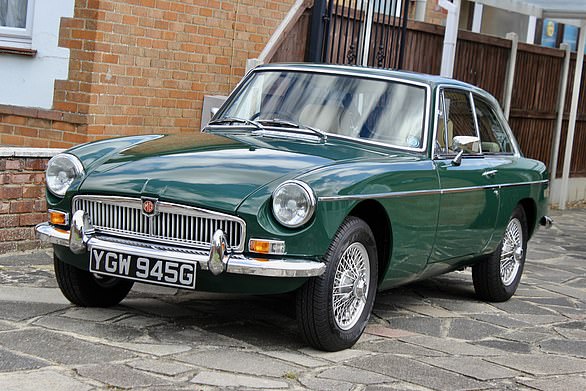 MGB: Launched in 1962 at the start of the Swinging Sixties, the MGB became the brand’s iconic model 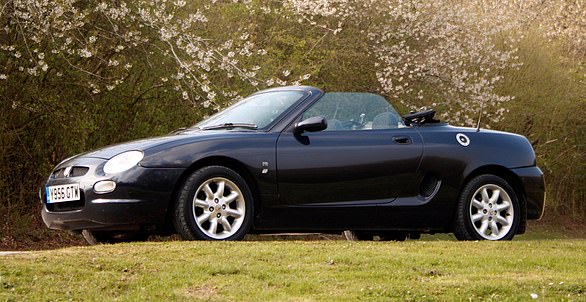 MGF: MG is reborn in 1995 with the mid-engined two-seater MGF which became became the UK’s best-selling sports car 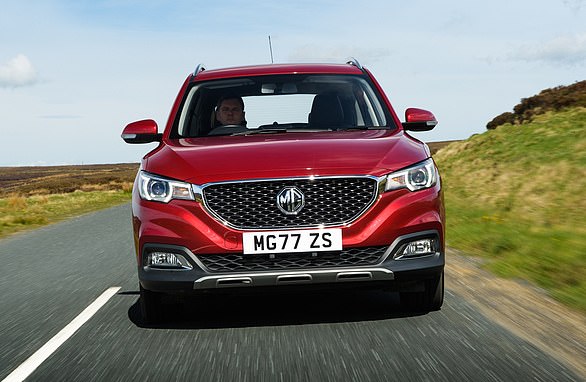 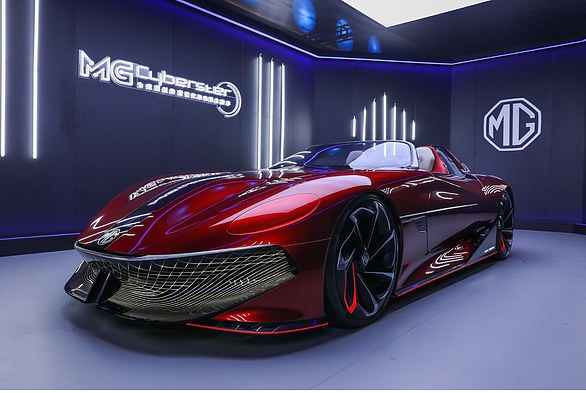 MG Cyberster: Designed in the UK with Union Flag rear lights and unveiled at this year’s Shanghai Motor show, the Cyberster is set to go into production

MG’s roots go back to the 1920s when the business manager of Morris Garages in Oxford, one Cecil Kimber, kicked off a canny promotional side-line, modifying standard production Morris Oxfords and adding MG Super Sports to the plate at the nose of the car.

Later, he registered the familiar badge as a trademark and by 1928 had formed MG Cars Ltd.

The first unique MG was the 18/80 open-top sports saloon, followed by the 1929 M-Type, the first car to wear the famous MG Midget name.

But it was the later T-Type Midgets that put MG on the global map after U.S. servicemen stationed in the UK shipped them over to America after World War II, sparking a massive export drive.

Morris founder William Morris was ennobled as Lord Nuffield and MG became part of part of Nuffield Motors alongside Morris.

In 1952, the Morris and MG brands merged with Austin to become the British Motor Corporation (BMC) with MG as its flagship sports brand. 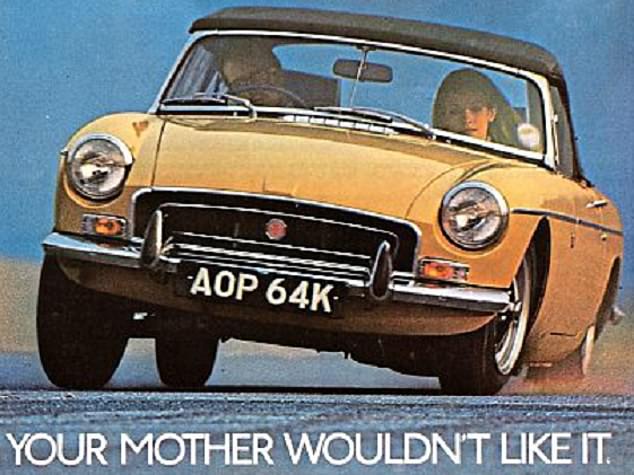 Racey: MG targeted women buying for themselves or being driven in the rakishly sporty MGs by warning, in a mock disapproving manner: ‘Your mother wouldn’t like it’

Later came the MGA achieving astonishing sales across the U.S. and Europe, followed in 1961 by the new Midget derived from the chassis of the Austin-Healey Sprite. There were also sports versions of BMC saloon cars in the form of the MG Y-Series and Magnette.

As Beatlemania sparked the dawn of the Swinging Sixties, 1962 saw the launch of the popular MGB roadster sports car. It continued in production for nearly two decades alongside the hard-top GT grand tourer, until MG’s Abingdon factory near Oxford finally closed in 1980.

The MG name was kept alive through ‘badge-engineering’ as its logo was used on sportier Austin Rover cars such as the Metro and Maestro hot hatches and the MG Montego saloon.

It was reborn again in 1992 with the powerful MGB-based MG RV8, which in turn paved the way for the all-new rear-engined MGF, launched in 1995, which became the UK’s best-selling sports car and evolved into the MG TF until 2005.

After being bought in 1994 by BMW, MG’s parent Rover Group — dubbed the ‘English Patient’ by its German bosses because of accelerating losses — was sold just six years later in 2000 for only £10 to the controversial Phoenix Consortium of supposed saviours who scandalously asset-stripped the firm, now named MG Rover, before it went bust in 2005.

The Phoenix Four directors were castigated in an official government report.

The firm was then picked up for a song by China’s Nanjing Automotive, which quickly merged with the bigger Shanghai Automotive Industry Corporation, which retains control to this day of the renamed MG Motor UK.

There are still plenty of enthusiasts for MGs old and new, many belonging to clubs such as The MG Owners’ Club (mgownersclub.co.uk), the MG Car Club (mgcc.co.uk), MG Octagon Club (for pre-1956 MGs) and the Midget and Sprite Club.

It just goes to show that you still can do ‘it’ in an MG. But unlike in the 1960s and 1970s, this is for now a range of family cars that mothers of today really would like. 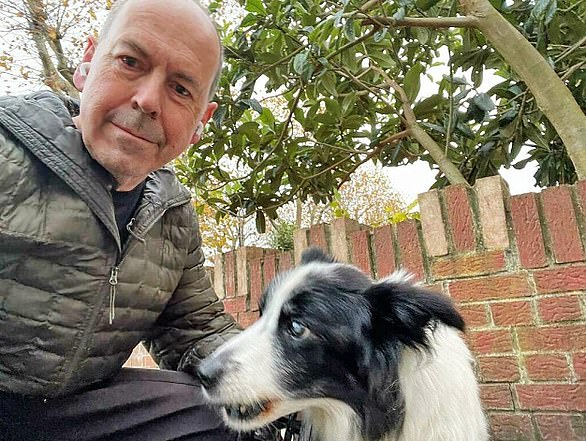 Reunited: Rory and his dog Cabbage, who was one of six dogs taken when a dog walker’s Ford van was stolen in London this week

Hardly had veteran BBC newsman Rory Cellan-Jones left the corporation after decades of sterling service than his long-standing specialism — technology — came to his rescue.

The broadcaster’s beloved pet collie, Cabbage, was one of six dogs taken when a dog walker’s Ford van was stolen in London this week.

And a nifty bit of smartphone kit from car giant Ford was the key to getting all six dogs back safely — along with the van. The clever FordPass app was used to track the location of the black Transit after it was stolen while parked in the London suburb of East Acton.

Mr Cellan-Jones took to Twitter and social media armed with details including the registration number and appealed for the public to help find the missing animals and the van. But the deciding factor in the successful conclusion was that van-owner Brett Holte-Smith had linked his vehicle to the free FordPass security and service app when he bought it new last year. Significantly, it can protect owners’ vans from thieves who often target them for the contents such as tools.

Once activated, the FordPass system located the Transit at Park Royal, near Ealing. By the time the search team arrived, the vehicle had gone, but the dogs were later found roaming and recovered, as was the van.

Relieved, Rory said afterwards on his Always On blog: ‘So this is a tale of smartphone and social media technology helping to bring these lovely pets home to their owners? Well, imagine this had happened 20 years ago — getting the word out would have been a much slower process.’