A pub that has been in the same family for 250 years is named the best in the country today.

The Bell Inn in the picturesque village of Aldworth in Berkshire has won CAMRA’s Pub of the Year award.

The only pub in Berkshire with a Grade-II listed interior, it last won the coveted Pub of the Year title nearly 30 years ago to the day.

Ben Wilkinson, Camra’s Pub of the Year organiser, said: ‘The judges were impressed with how a stranger entering the pub was treated like a regular straight away.

The name of the Grade-II listed building refers to bells which were part of the coat of arms of the traditional landowners in the area, with the pub believed to be a manor when it was first built in the 15th Century 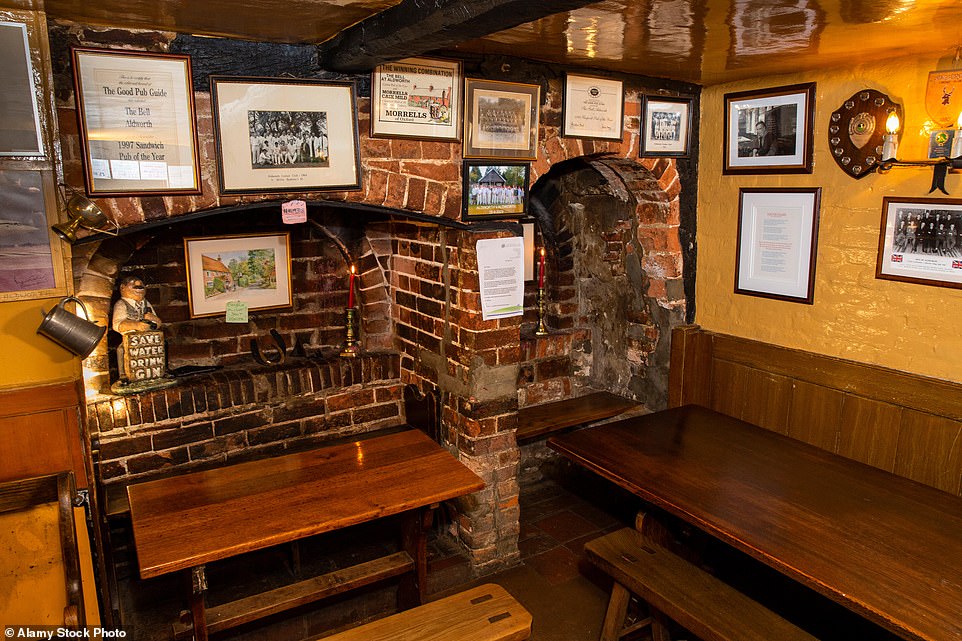 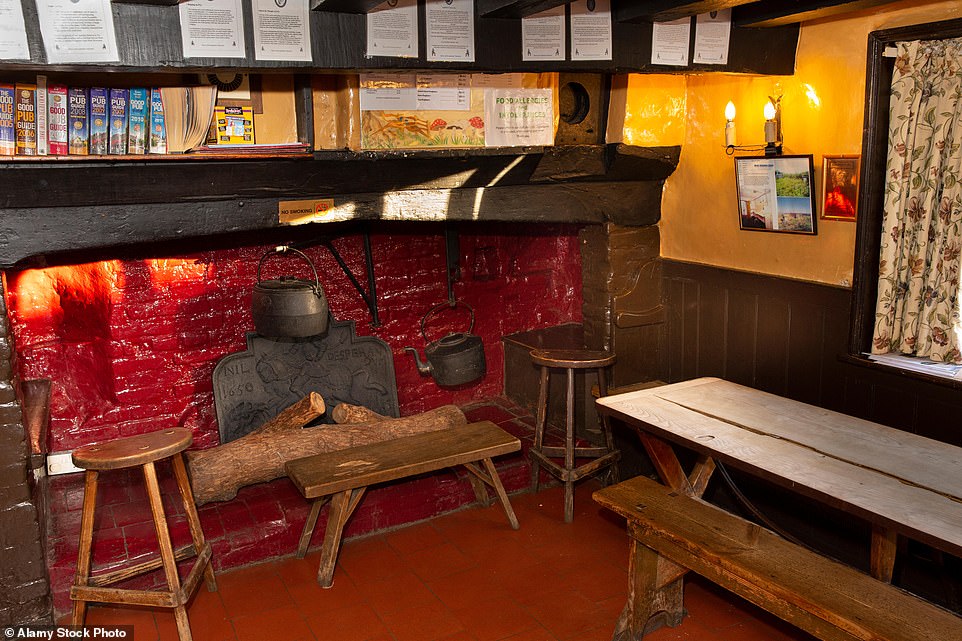 Ben Wilkinson, Camra’s Pub of the Year organiser, said: ‘The judges were impressed with how a stranger entering the pub was treated like a regular straight away’. Pictured: interior of the pub

‘It’s clear that the local customers use the pub as a community centre as well as a place to drink, and the warm welcome and knowledgeable staff made us feel right at home.

‘Nothing can beat the combination of good beer, great food and warm heritage pub.’

The Bell Inn last scooped the award three decades ago, when it was run by the current owner’s parents, Heather and Ian Macaulay.

Her son, Hugh Macaulay, was delighted to see the award come home again after so many years.

He said: ‘The Bell Inn has been in my family for 250 years and my mother and father were running it when we last won the award. It’s a wonderful thing to be recognised for driving quality year after year.

‘Not much has changed because we have kept our interior unspoilt all this time, and intend to keep it that way for years to come.’

Pubs in the competition are selected by Camra volunteers and judged on their atmosphere, decor, welcome, service, community focus and the quality of the beer.

Runners-up in the competition include the Swan With Two Necks in Pendleton, Lancashire, the George & Dragon in Hudswell, North Yorkshire, and the Red Lion in Preston, Hertfordshire.

The runners-up and regional winners who just missed out… 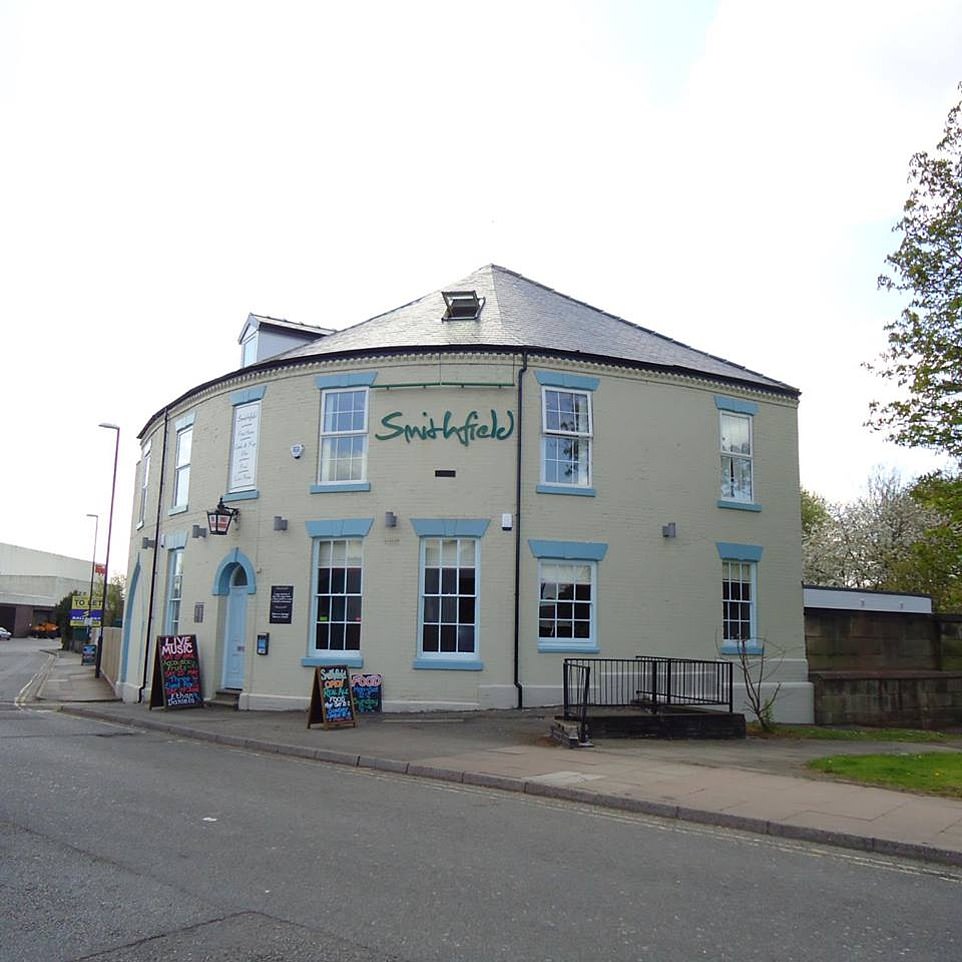 The Smithfield Pub in Derby, pictured, won the award for best pub in the East Midlands partly down to its large outdoor terrace overlooking the River Derwent. It is also the second year in a row that The Smithfield has won the East Midlands award. CAMRA praised its beer range as varied with a ‘strong emphasis on new breweries’ and a ‘good selection of craft keg beer’. Built in 1840, the pub is family and dog-friendly with wifi, live music and traditional pub games on offer. 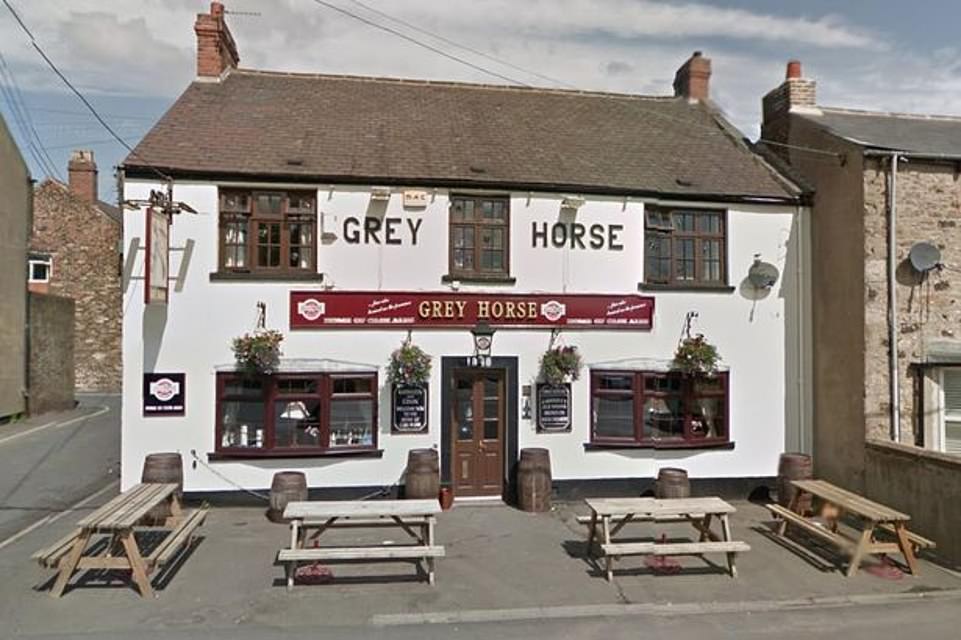 The Grey Horse in Consett, pictured, is another pub with plenty of history and has been in the area since 1848. It picked up the North East award and was lauded for its interior, which comprises of a lounge and L-shaped bar as well as a traditional wood-beamed ceiling. The pub also houses Consett Ale Works Brewery at the rear and beer festivals are held twice a year on the premises. It is also very popular with cyclists due to a coast-to-coast route being nearby, while it also brings in punters with live entertainment and a quiz night 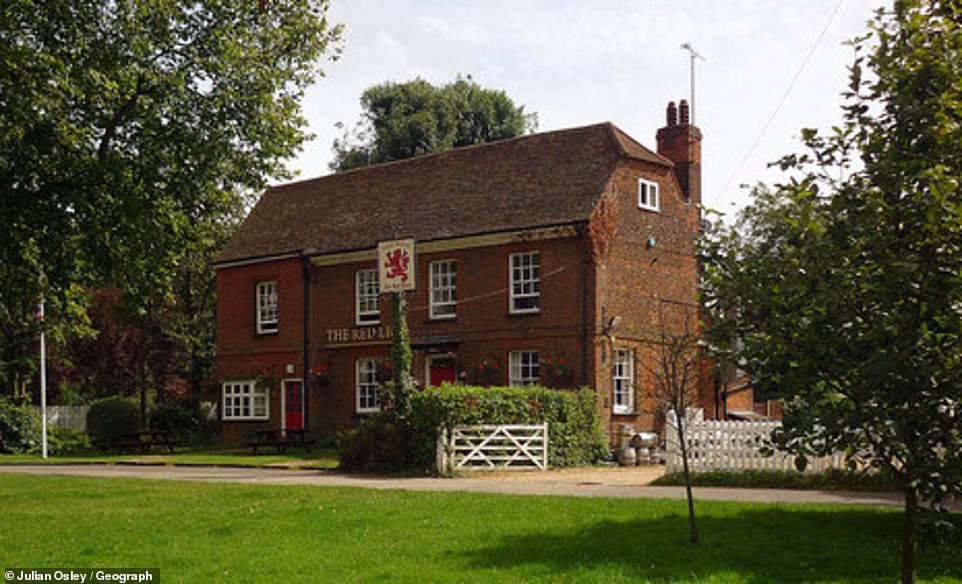 The Red Lion in Preston, Hertfordshire, pictured, is the first community-owned pub in Britain and is very popular due to its location next to a village green. It won for the East Anglia region and CAMRA said one of the reasons for its success is an ‘ever-changing list of beers’ including many from small breweries. The pub, which frequently stages events for charity and is a popular haunt for local cricket teams, was also praised for offering fresh home-made food using locally-sourced ingredients 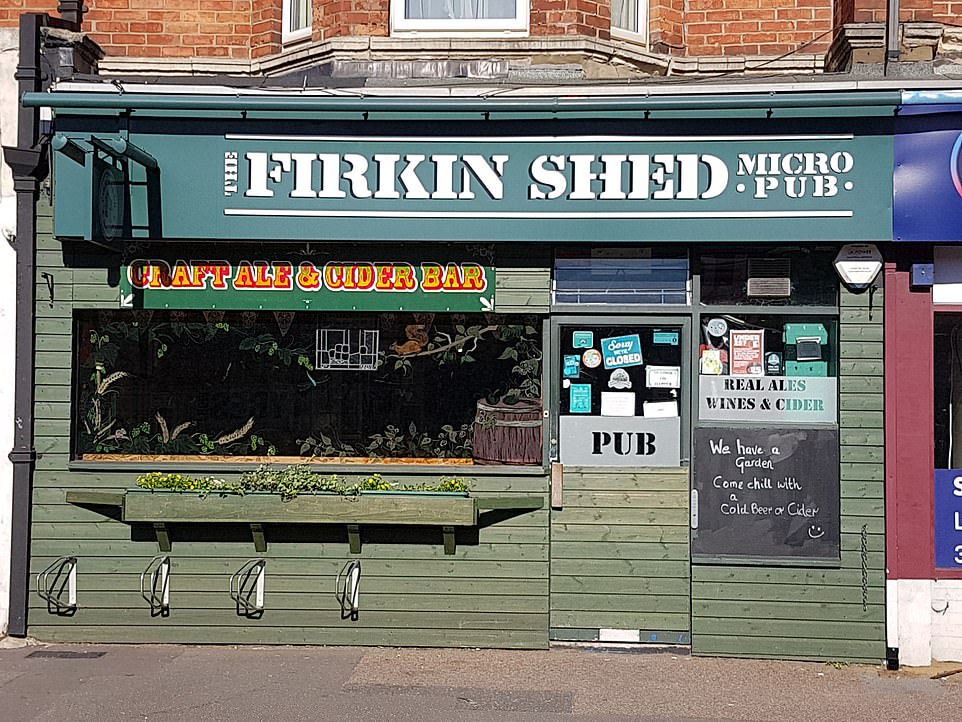 The winner for the Wessex region was The Firkin Shed in Bournemouth, pictured, which is already the reigning CAMRA National Cider Pub of the Year. The Shed is known as a ‘quirky, friendly, family-run micropub’ and special mention was made of its interior, which is decorated with flags, musical instruments, puppets and skulls. Fittingly, a shed is used as the bar with ten constantly changing ales, and fourteen plus ciders sourced from around the country. Beers are served straight from the cellar viewable through the window in the corridor 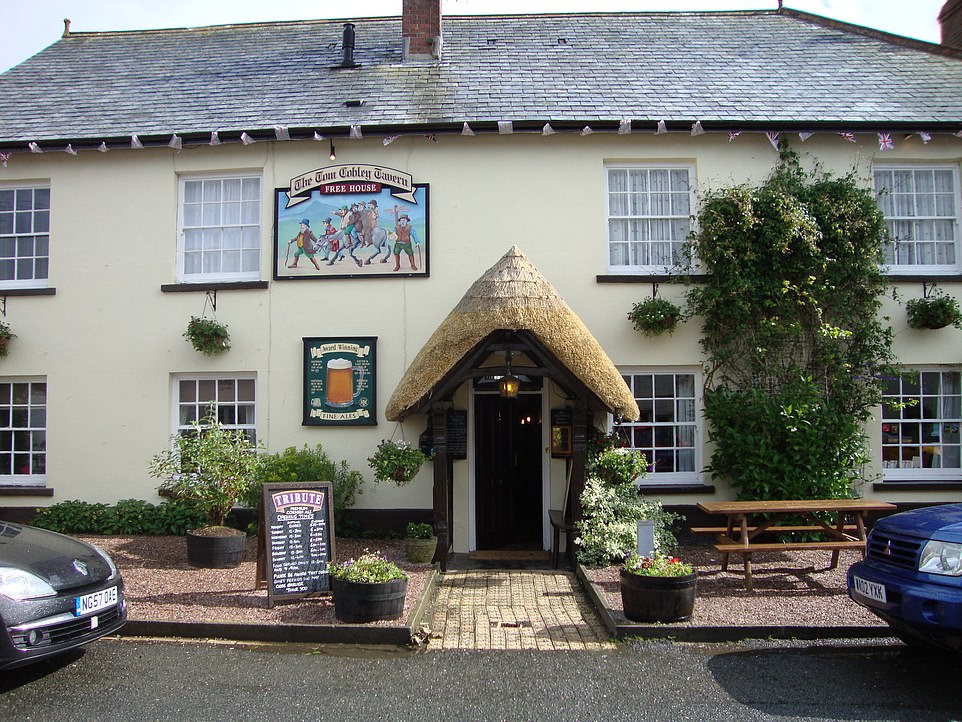 Another former CAMRA Pub of the Year, the Tom Cobley Tavern in Spreyton, Devon, won the South West regional prize and could well take the top award once again. The 16th Century watering hole has won a multitude of CAMRA awards previously and features up to 10 West Country ales, some straight from the cask, plus 12 real ciders and perries. The pub also doubles as an inn, with five en suite guest rooms on offer, and hosts regular darts and quiz nights 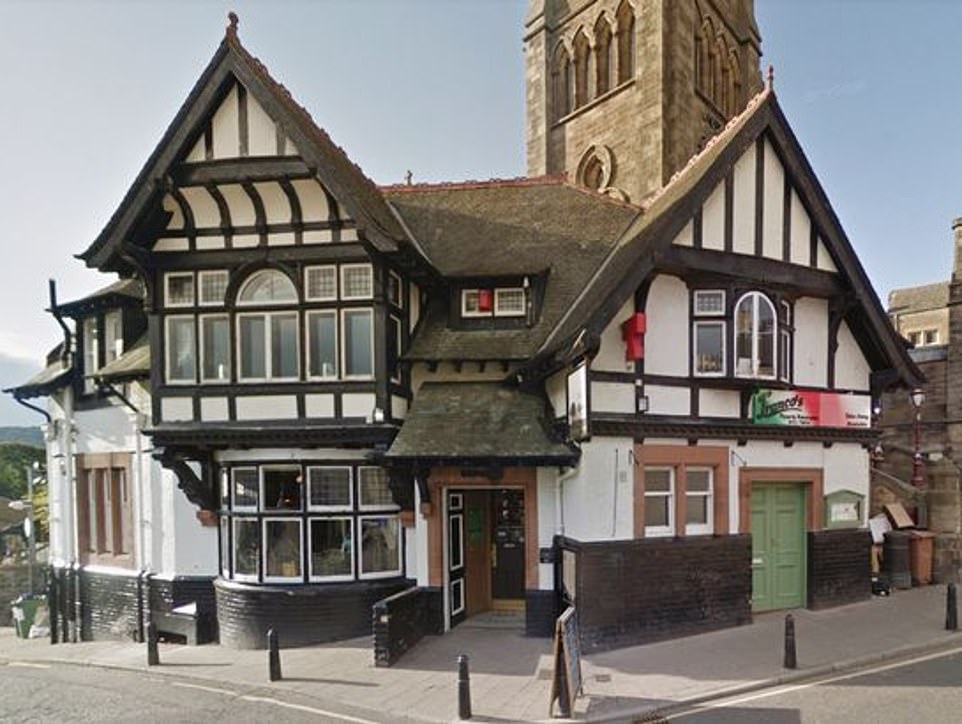 The Bridge Inn in Peebles won the regional award for Scotland & Northern Ireland with its eye-catching exterior one of the reasons for its success. CAMRA describes it as a ‘cheerful and welcoming, town-centre local which is also known as ‘the Trust’ among locals due to its slogan ‘In Bridge we Trust’. The building also boasts a mosaic entrance floor which reveals its previous life as the Tweedside Inn. It is decorated with jugs, bottles, pictures of old Peebles and displays relating to outdoor activities. The pub also does not admit children because they are viewed as a ‘distraction’ to drinking 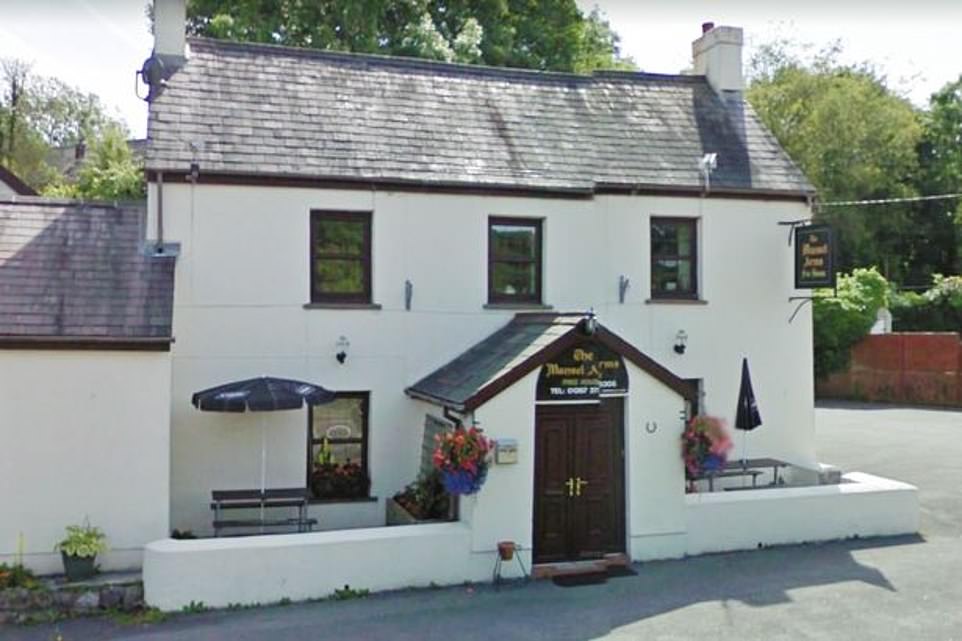 The 18th Century former coaching inn The Mansel Arms in Porthyrhyd, Carmarthenshire, pictured, scooped the prize for Wales. It was praised for its ‘friendly and welcoming atmosphere’ which is helped by wood fires in both of its bars. CAMRA also highlighted its efforts to promote real ales, including tasting boards with 1/3 pints of each beer. The Mansel Arms also has an in-house cask ale members’ club encouraging beer-lovers to go on regular brewery visits and attend brewers’ speaker/taster events 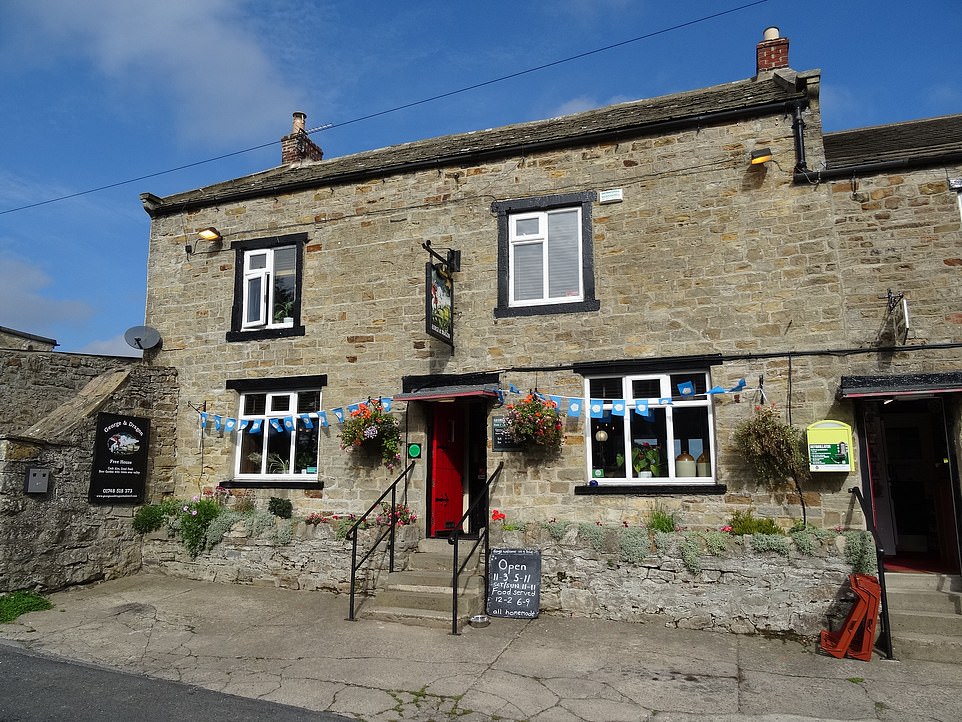 The George & Dragon in Hudswell, pictured, won the regional award for Yorkshire and is found at the heart of the village. It is another frontrunner for the overall prize having been named CAMRA Pub of the Year in 2016 while it has won the regional prize on several occasions. CAMRA said one of its best features is a large beer terrace that offers panoramic views of the Swale valley. The pub was saved from closure by the Hudswell community in 2010 and was refurbished, now boasting allotments and a library as part of its services 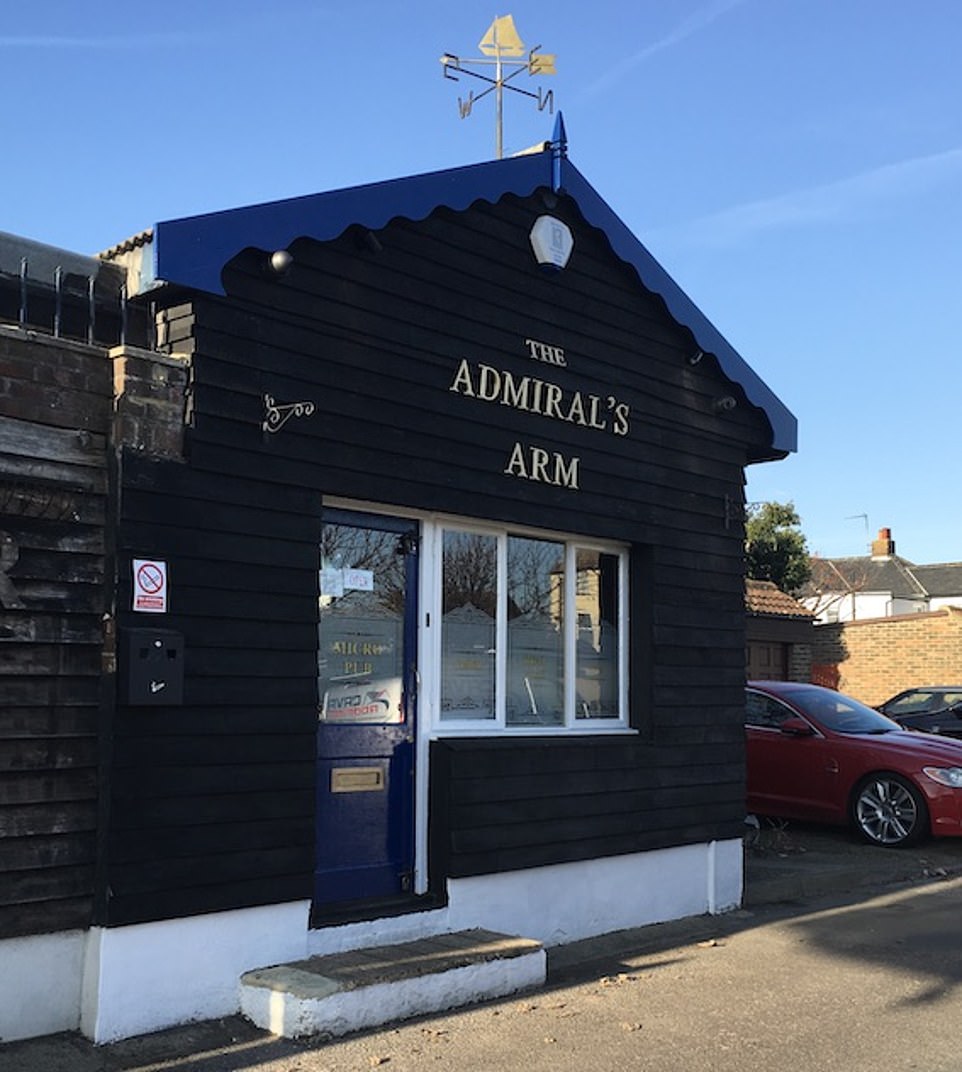 It may not look much from the outside, but micropub The Admiral’s Arm in Queenborough, pictured, did enough to impress judges to be named the best pub in Kent. It has just two rooms and serves only four real ales, but is very popular for its large range of ciders, perries and gins. CAMRA also lauded its snack menu which includes beer-infused pork pies and scotch eggs. Aptly for its name, the decor is a nautical theme, featuring hand-crafted wooden benches and tables 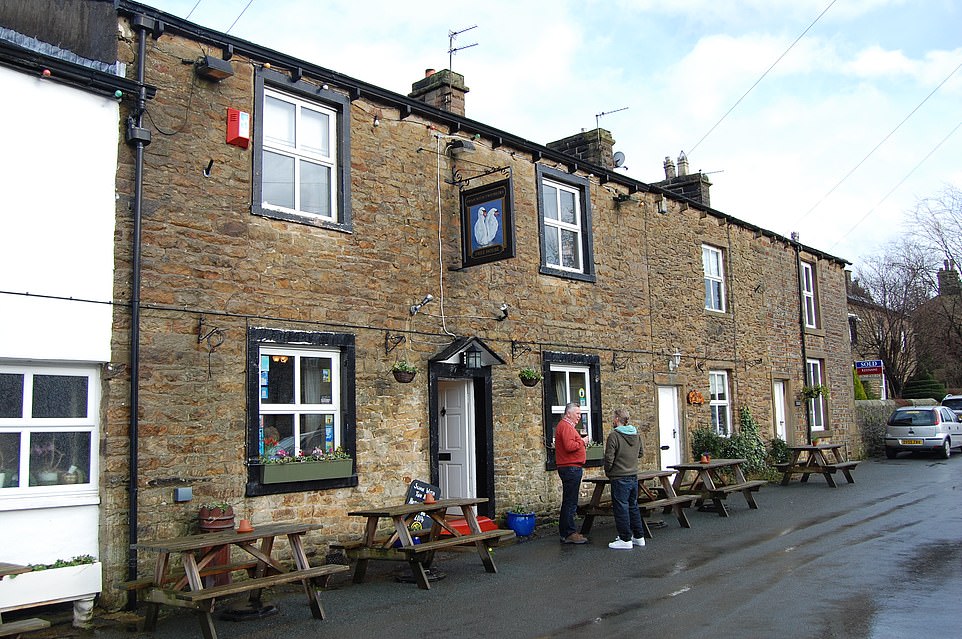 The Swan with Two Necks in Pendleton, Lancashire, pictured, was CAMRA’s National Pub of the Year in 2014 and has scooped another regional award for the West Pennines area. CAMRA called it an ‘outstanding traditional pub’ that has recently been renovated and is ‘popular with locals and visitors alike’. Five constantly changing ales and one real cider are served and discounts are available for CAMRA members. Home-cooked food is also served while there is plenty of outdoor seating for the summer and open fires indoors when the weather gets colder 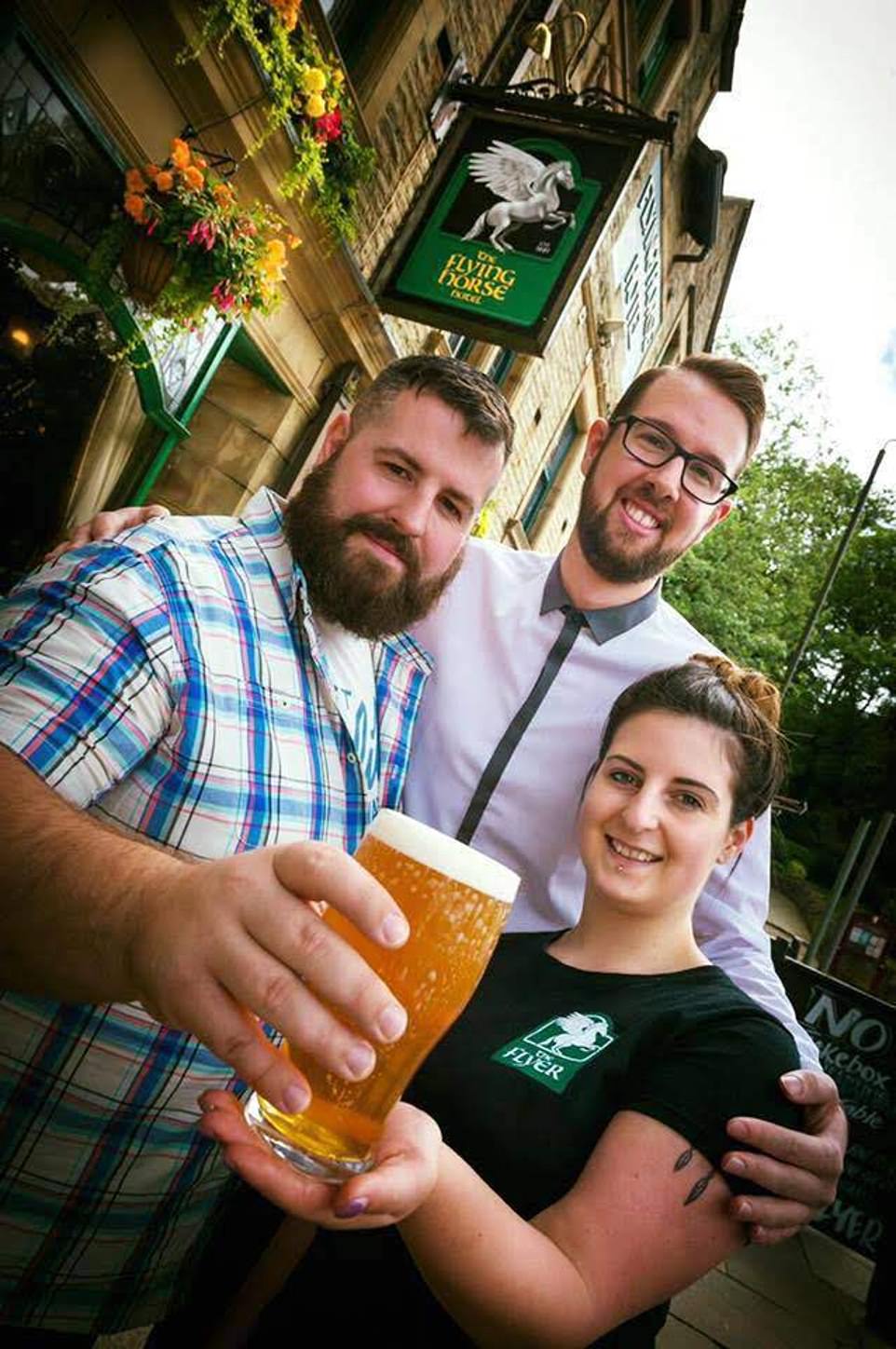 The Flying Horse in Rochdale is one of the quirkiest pubs on the list. It won the prize for the Greater Manchester area and offers plenty of history, having been built in 1691 and then rebuilt in 1926, keeping many of its original architectural features. But despite the history there are plenty of modern touches and it made the news in 2016 after landlord Ben Boothman,pictured left with his staff, renamed items on the menu after the death of musical icon Prince. The hotel offers 10  cask ales and two traditional ciders alongside live sports and music 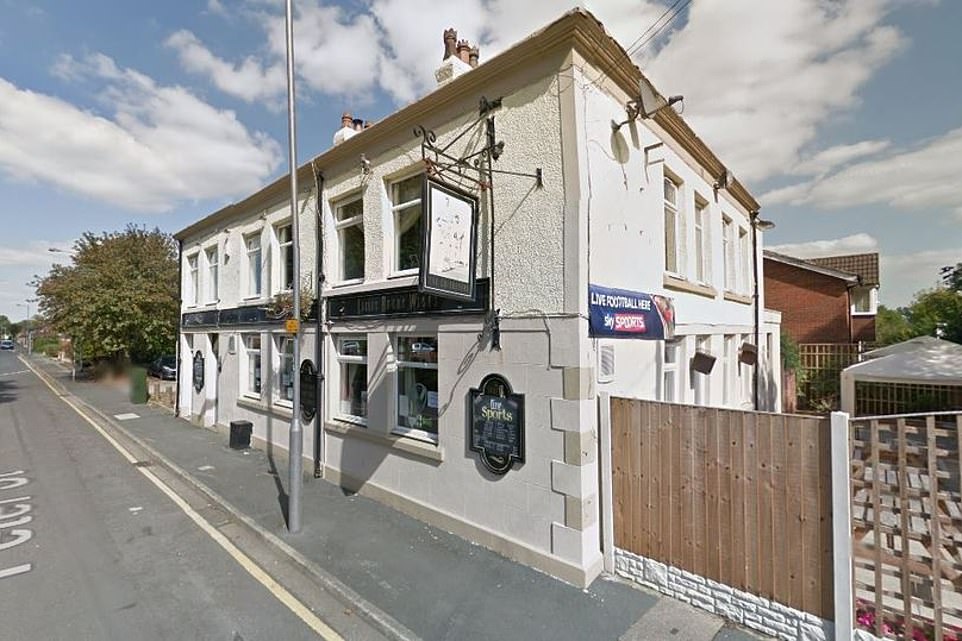 Another former CAMRA Pub of the Year in the running for the top prize this year is The Cricketers Arms in St Helens, pictured, which won the Merseyside regional honour. Described as a ‘friendly, family-run community pub’, it boasts 13 ever-changing hand pulls, 10 ciders and more than 100 gins. It has also just undergone a refurbishment and has two beer gardens and an outside bar for regular beer festivals, private events, darts and pool leagues, quiz nights and regular fundraising events for local charities. An on-site micro-brewery is also planned to be installed later this year 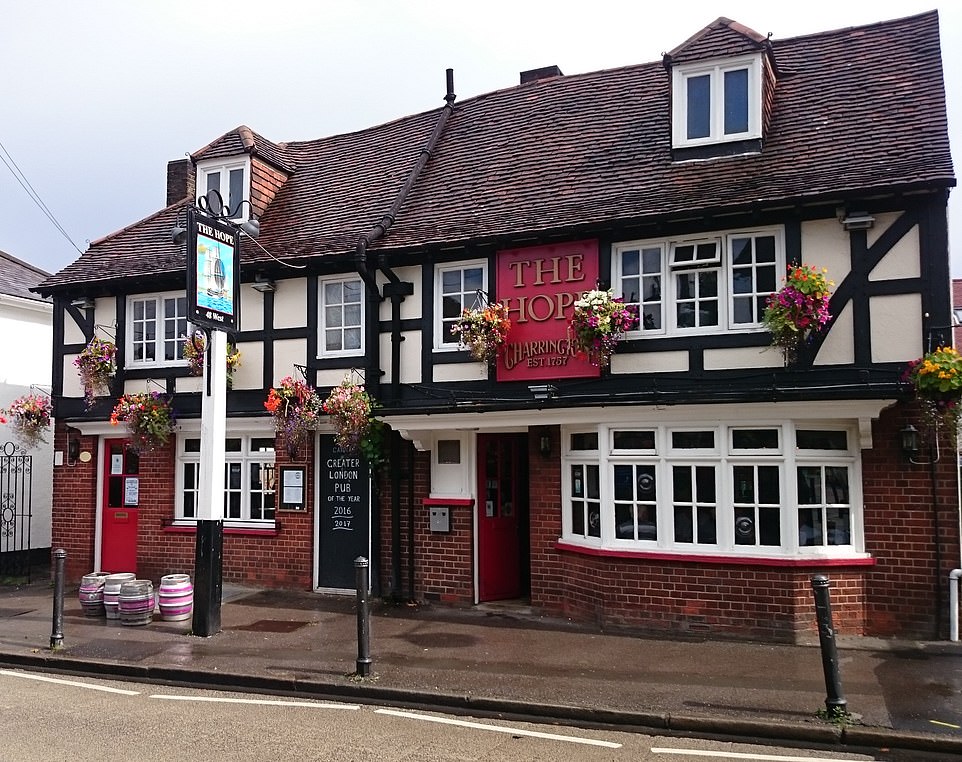 London’s regional prize was won by The Hope in Carshalton, pictured, built in 1757. CAMRA said it recognised the pub because it is ‘run by beer enthusiasts, for beer enthusiasts’, and is owned by 46 of the customers. There are no fruit machines, TV or ‘muzak’, but there are five regularly changing guest beers supplemented by three regular cask ales. It also has a popular Twitter account named after the pub’s cat, a stray animal that was adopted several years ago and has since become a huge attraction 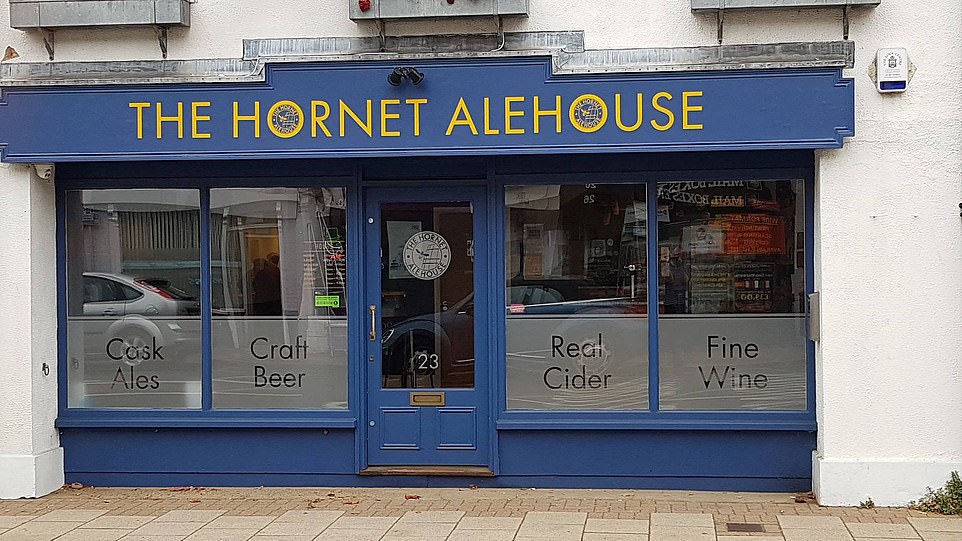 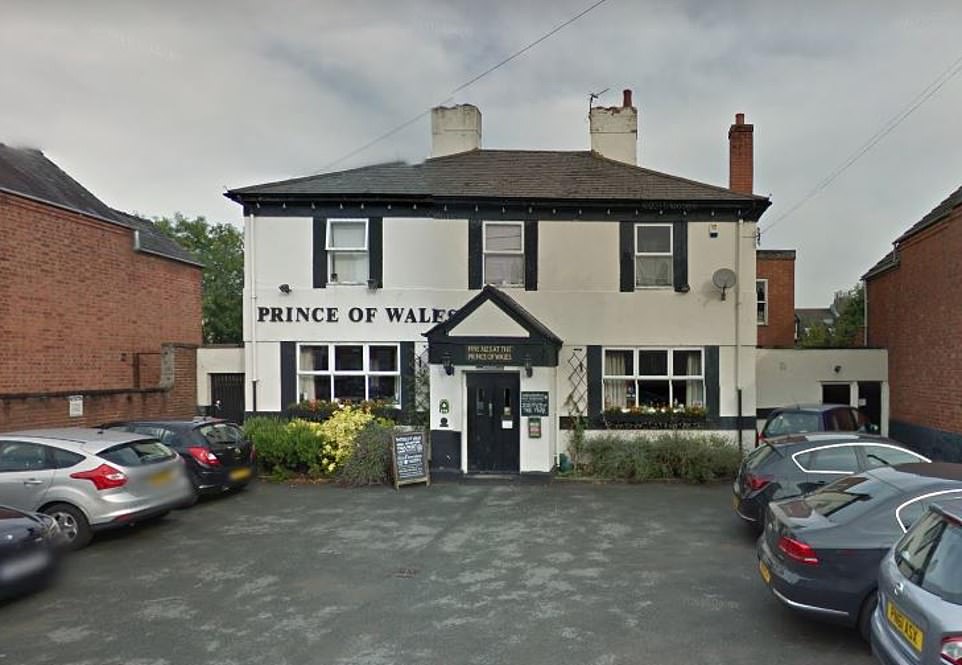 The winner for the West Midlands region is The Prince of Wales in Shrewsbury, pictured, a ‘welcoming two-roomed back street local’ facing out over the bowling green. The pub is popular with darts, dominoes and bowls teams and hosts two beer festivals each year, while it also pays tribute to nearby Shrewsbury Town Football Club with memorabilia adorning the building inside and out. Some of the seating from the club’s former ground Gay Meadow is even dotted about the green