More business leaders – including a prominent Brexiteer – lined up to support Theresa May’s Brexit deal yesterday, urging MPs to put ‘the good of the country’ before politics.

Bosses from chemicals giant Ineos and aerospace group Airbus said the deal would give the UK time to decide future trade arrangements while avoiding the chaos of a ‘no deal’ scenario.

Jim Ratcliffe, the boss of Ineos and Britain’s richest man, called on MPs to rally behind the Prime Minister and warned leaving without a deal posed ‘significant risks’. The billionaire backed Brexit during the EU referendum campaign.

Jim Ratcliffe, the boss of Ineos and Britain’s richest man, called on MPs to rally behind the Prime Minister and warned leaving without a deal posed ‘significant risks’. He is pictured receiving a knighthood at Buckingham Palace on October 31

An Ineos company statement added: ‘We would hope that our parliamentarians would now put the good of the country ahead of political considerations and ensure a safe passage for the deal through Parliament.’

And Katherine Bennett, the UK head of Airbus, came out in support of the deal during a hearing of the business committee in the Commons.

She told MPs Mrs May’s deal would allow the company to emerge from a ‘holding pattern’ that has seen it hold back from big investment decisions due to uncertainty.

Executives from the pharmaceuticals industry also welcomed a transition period secured by Mrs May and told MPs it would keep vital medicines flowing into the country after Brexit day. 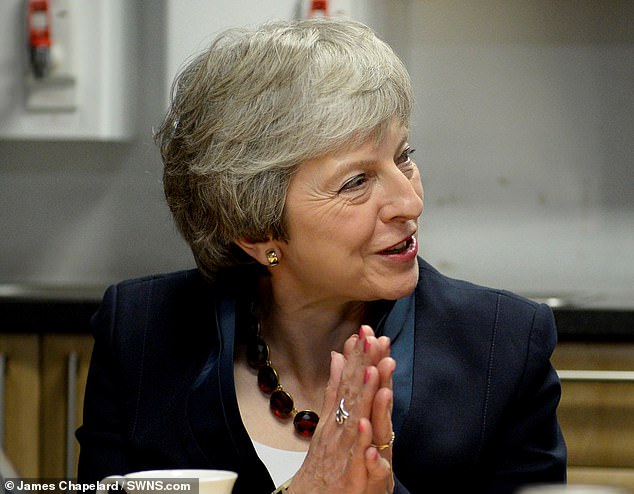 The group included the boss of Novo Nordisk, the UK’s biggest insulin supplier – a drug the Prime Minister relies on personally as a type 1 diabetic.

Their interventions came as a welcome boost to her as she fights for support for the exit deal in Parliament, ahead of a vote on December 11.

Later, Mike Thompson, chief executive of the Association of the British Pharmaceutical Industry, also said Mrs May’s agreement would be vital to keeping the supply of medicines flowing.