Back to work day: Commuters pack onto Tube and trains

London Mayor Sadiq Khan was today urged to get a grip and increase levels of trains and buses urgently as stomach-churning video and photographs showed commuters crammed in like sardines this morning.

Boris Johnson has said that anyone who cannot work from home should attempt to return to their workplace – but social media videos make it crystal clear that public transport has not been ramped up enough to help them travel safely.

Reacting to the chaos Transport Secretary Grant Shapps told Sky News today: ‘We do not want to see crushes on public transport and are urging people to make alternative arrangements’.

In London services commuters faced waits of up to 20 minutes on Tube lines when the gaps between services during rush hour should be three to five minutes as unions threatened to shut down the network if it is overwhelmed today.

Traffic was also very heavy on the approach to the Blackwall Tunnel – the main route across the Thames between south and east London – as more people, especially construction workers and tradesmen, headed back to work to pay the bills.

Blogger Jay Bits took to Twitter this morning to share footage of crowds of people getting off a bus in east London this morning and told MailOnline he capital’s mayor and Boris Johnson had to ‘sort this’ because lives are at risk.

He said: ‘You lot claim to care about the public I just watched and 86 bus at Stratford bus station pull in and not one person Is social distancing because there’s to many people on buses either put out more buses at peak times or just go back to lockdown’.

Good Morning Britain showed footage of a packed Central Line platform this morning where social distancing had gone out of the window in a familiar picture mirrored at many of the capital’s stations.

There is growing anger that those being asked to work and help the economy recover are being put in danger. Sadiq Khan’s Transport for London has also asked passengers to wear some form of face mask when using public transport in the capital but there were very few in sight this morning as people as PPE remains scarce and expensive.

The Prime Minister is trying to get people back to work on the day it was revealed that the UK economy contracted by 2 per cent in the first quarter of 2020 after plunging 5.8% in March as the coronavirus crisis took hold, the Office for National Statistics has said. 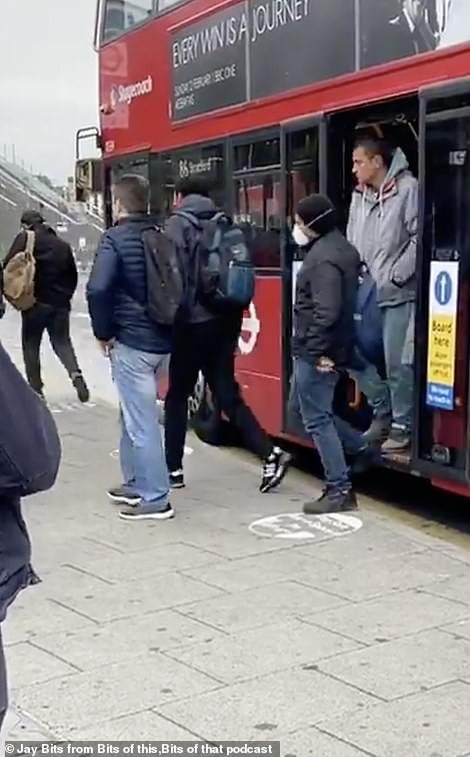 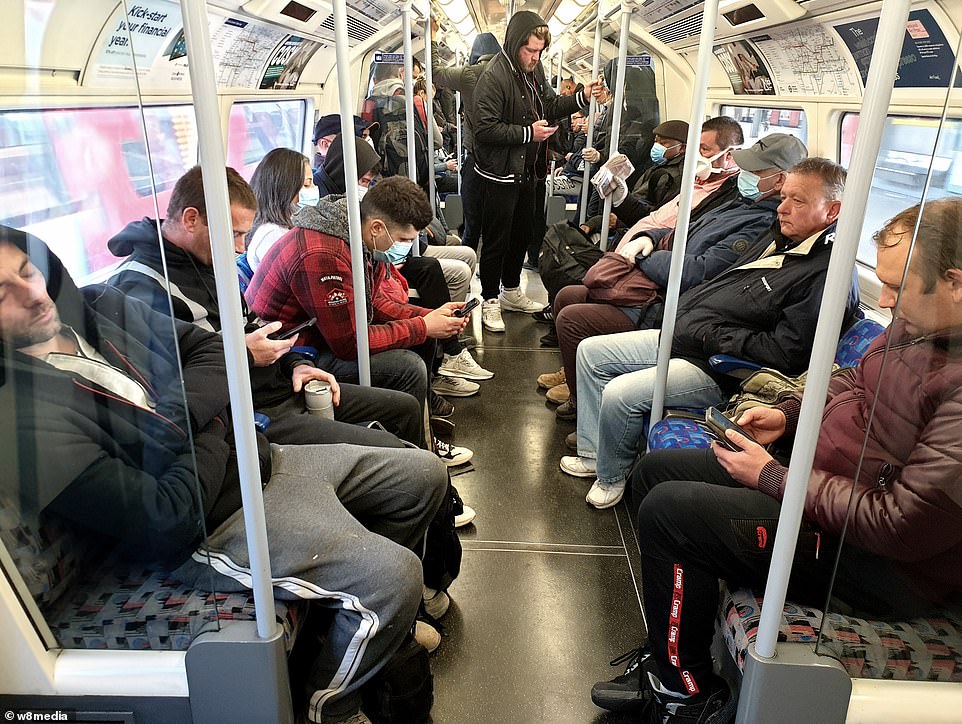 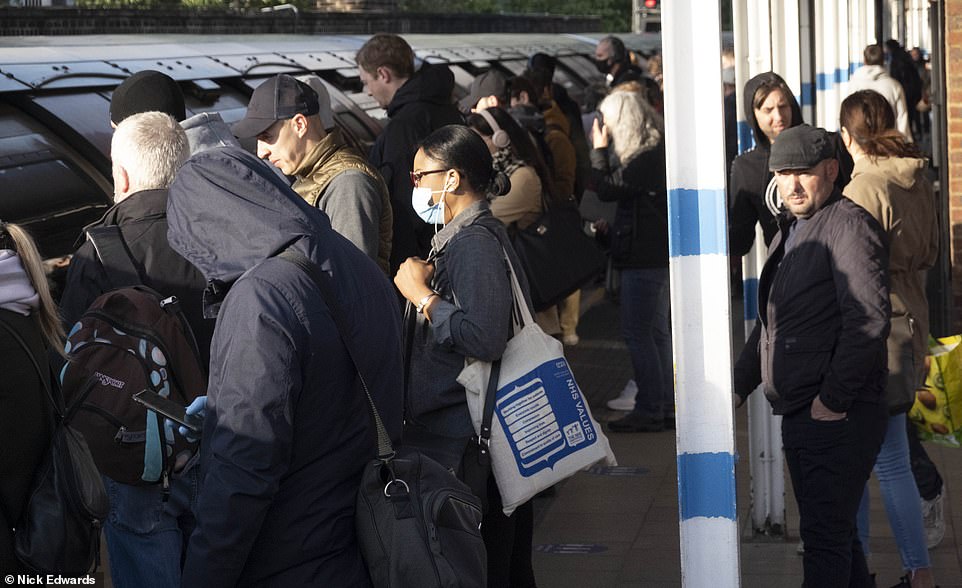 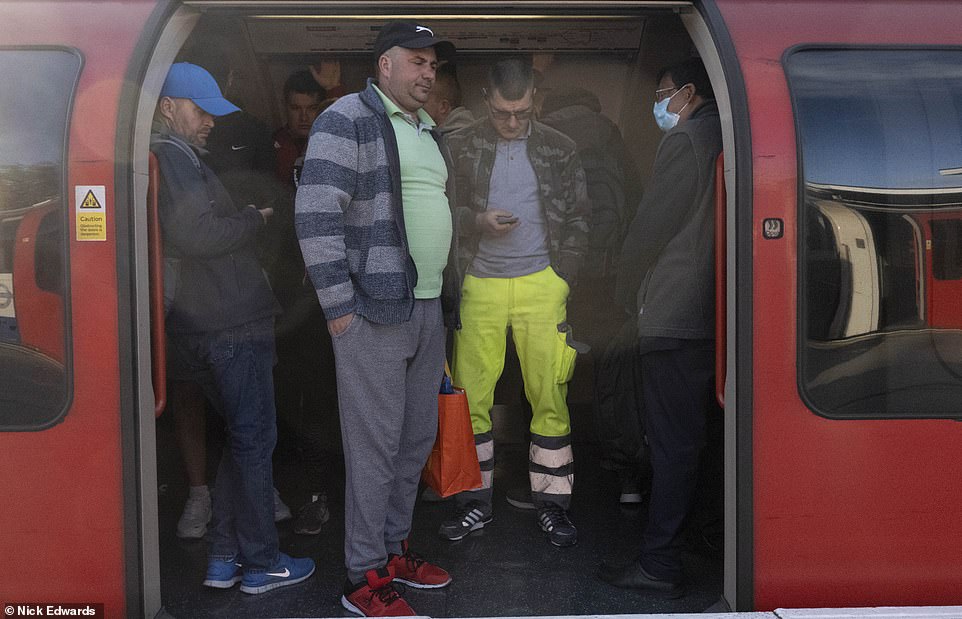 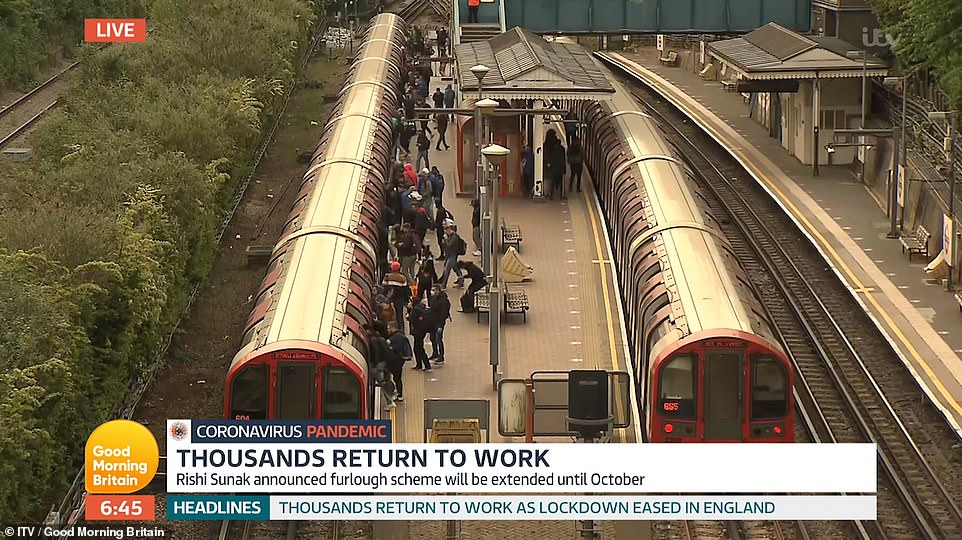 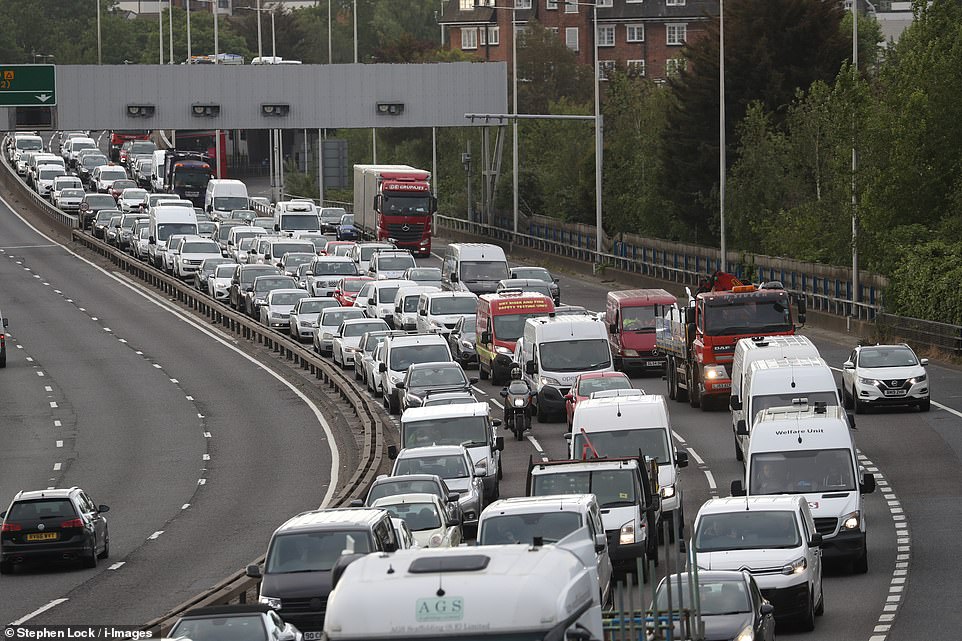 Traffic was also very heavy on the approach to the Blackwall Tunnel – the main route across the Thames between south and east London – as more people, especially construction workers and tradesmen, headed back to work to pay the bills.

As people returned to work today, it also emerged: 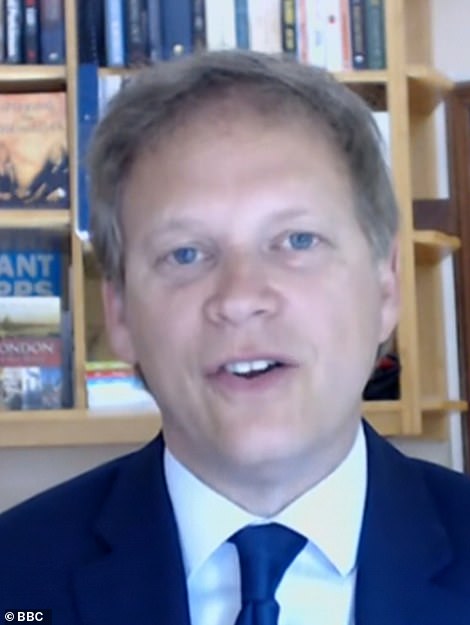 Gemma Collins was left lost for words after she received a video of a people flouting social distancing rules in a busy London tube station yesterday,.

The TOWIE star, 39, shared a clip of Holborn station on Twitter and expressed her confusion by writing: ‘Huh. Just been sent this of holborn station today.’

The clip shows Londoners during rush hour ignoring Prime Minister Boris Johnson’s advice to keep a two metre distance from each other.

Britons face pay freezes and tax rises to cover £300bn bill for coronavirus, leaked Treasury plans reveal as it emerges that one in three firms may NEVER reopen

England has eased the coronavirus lockdown and its people are now able to return to work, sunbathe, move home and meet one friend or family member in social bubbles.

Boris Johnson announced changes to the guidelines on Sunday, seven weeks after imposing the draconian measures on March 23.

The alterations to the rules has caused considerable confusion and anger with ministers’ scrambling to clarify the guidelines early this week.

Transport Secretary Grant Shapps has urged London Mayor Sadiq Khan to boost the number of train services ‘as quickly as they can’ amid fears of chaos on the railways today.

In London, ministers are concerned the reduced Tube service will be rapidly overwhelmed as figures showed the network will only be able to take 15 per cent of usual commuter levels if full social distancing is to be maintained – even if 100 per cent of services are running.

Nationally, this figure falls to just 10 per cent of normal passenger levels with full social distancing in play. 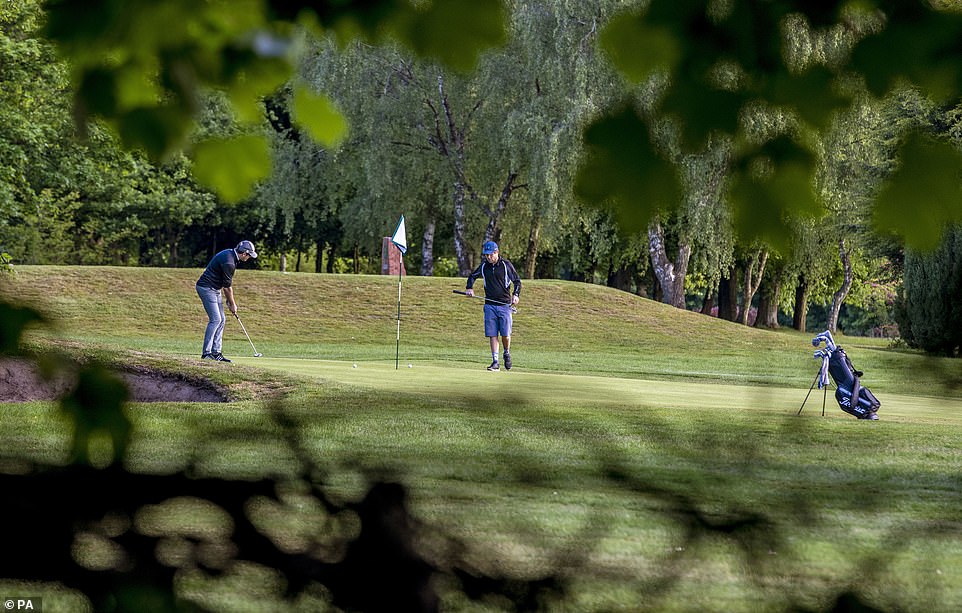 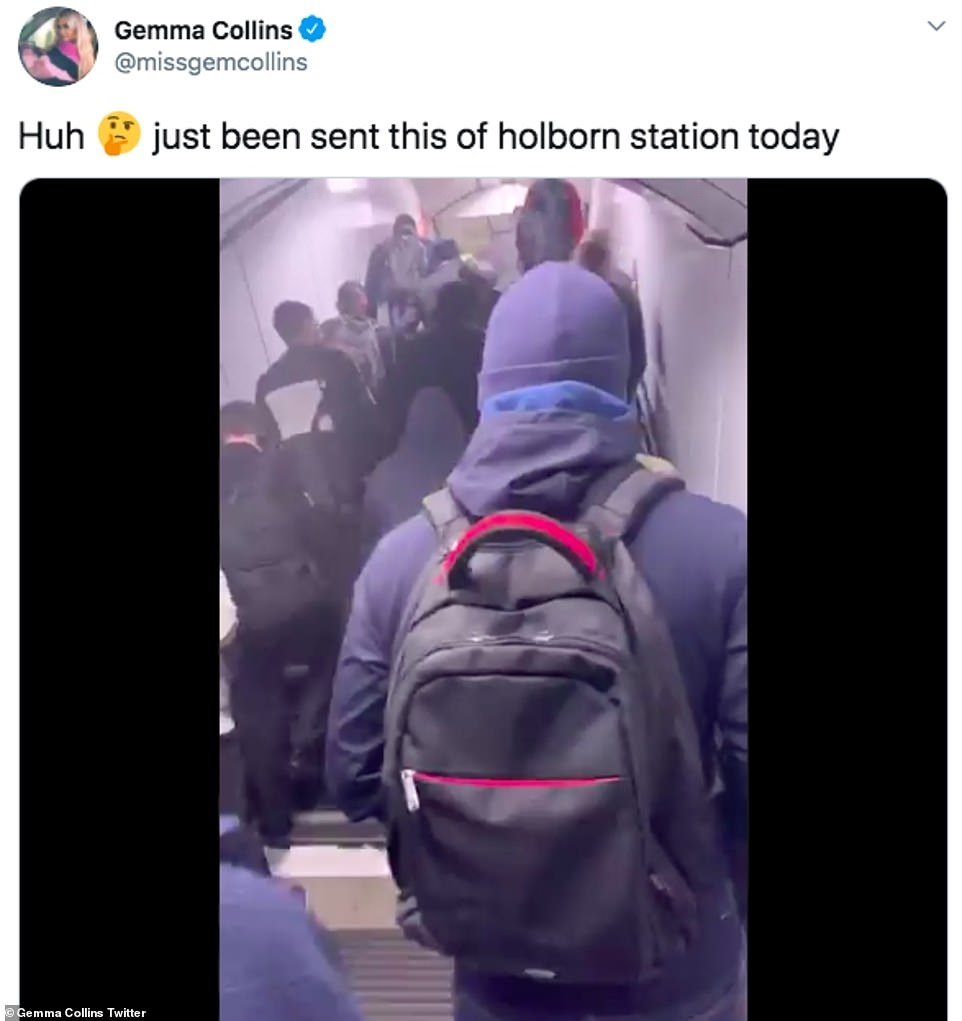 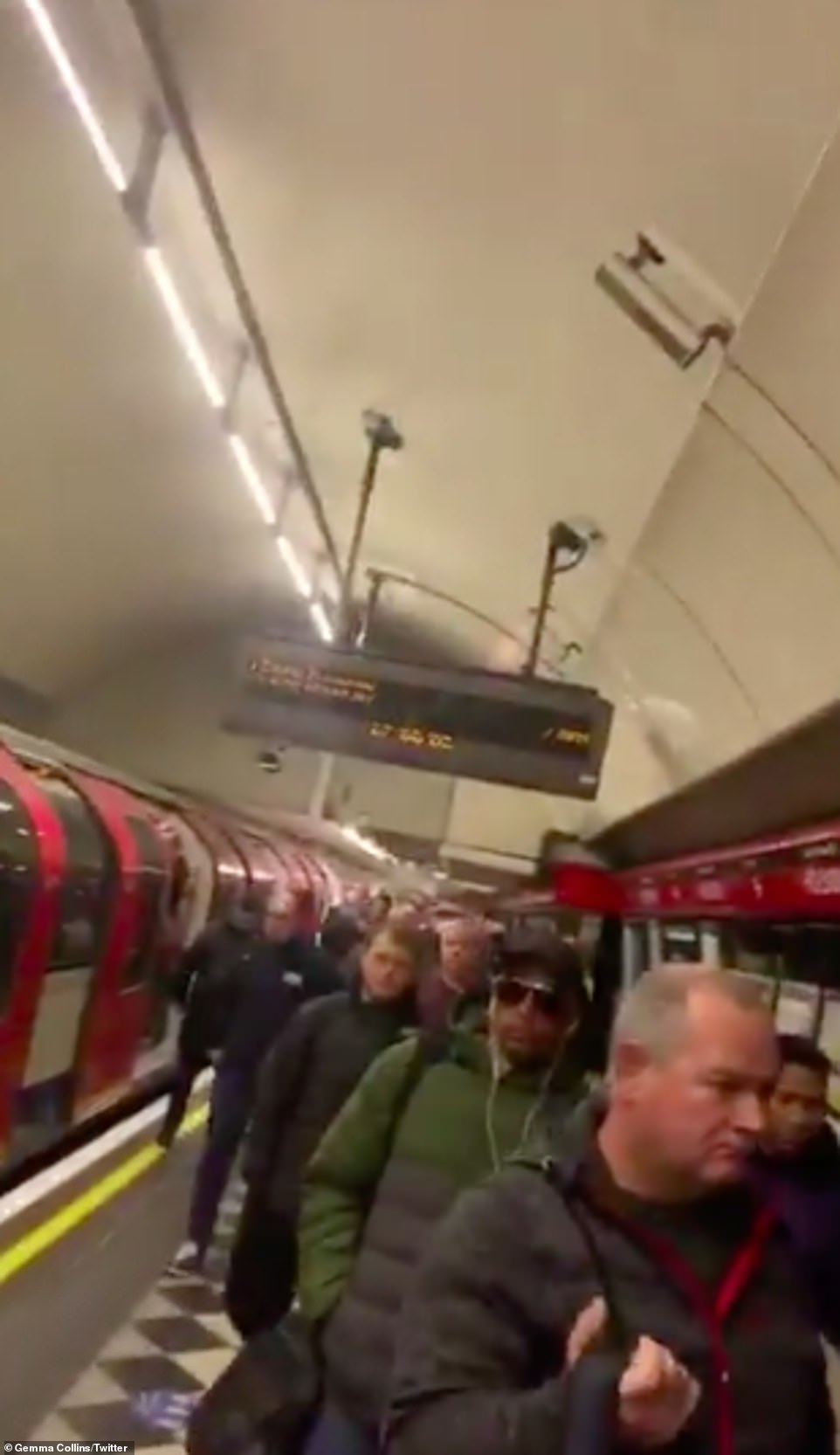 Bustling: The TOWIE star, 39, shared a clip of Holborn station on Twitter and expressed her confusion by writing: ‘Huh. Just been sent this of holborn station today’

Passenger numbers in the capital were already up eight per cent on Monday and are likely to rise significantly over the coming days as Britain slowly emerges out of the lockdown.

However, bosses at Transport for London (TfL), which has lost £4billion during the pandemic, have warned that increases in services will only be gradual, with 70 per cent of services eventually restored – but not until May 18.

Speaking in the Commons, Mr Shapps said: ‘I have spoken to, communicated with the mayor and his deputy mayor over the weekend. I am encouraging them and working very closely with TfL to boost those services just as quickly as they can and there’s more to go there.

‘It is worth reiterating, even if those services ran at 100 per cent of pre-Covid levels, we would still only be able to take perhaps on the TfL 15 per cent of existing, usual commuter levels – so it is important that everybody looks for alternative means of transport.’

It marks the latest row between the Government and Mr Khan, who has been accused of a series of failings throughout the crisis – from scenes of packed Tube trains early on in the lockdown to a row over a lack of personal protective equipment for bus drivers. Some 42 TfL workers have died of coronavirus, though not all necessarily because of the jobs.

Yesterday Mr Shapps also confirmed he is working with tech firms to integrate ‘crush data’ into transport apps so travellers can avoid using the busiest services in the coming months.

Under the new rules you can take unlimited exercise, sunbathing and meeting one person from another household in a public space will also be permitted in England from Wednesday, as long as the two-metre rule is respected.

While golf clubs, tennis courts and angling have been given the green light, but clubhouses will remain closed.

Restrictions on how far people can travel to get to the countryside, national parks and beaches in England have also been lifted – but people have been warned to respect local communities, keep their distance from others and avoid hotspots or busy areas.

Advice on avoiding public transport aside from essential journeys remains in place, and staying overnight at a holiday or second home is also not allowed.

Fines for those who break the rules will now start at £100 in England, and will double on each further repeat offence up to £3,200. Stricter rules remain in place in the rest of the UK.

Meanwhile, The Daily Telegraph said a Treasury document estimated the UK’s deficit could reach £337 billion this year because of the pandemic, compared to the forecast £55 billion in the Budget announced in March.

It said the assessment, drawn up for the Chancellor Rishi Sunak and dated May 5, warned that filling such a gap through tax rises would be ‘very challenging without breaking the tax lock’.

The paper said measures including income tax hikes, a two-year public sector pay freeze and the end of the triple lock on pensions may be required to fund the debt.

It comes after Mr Sunak announced the furlough scheme, currently supporting 7.5 million jobs, will be extended until the end of October, although employers will be expected to pick up a share of the bill from August as the economy reopens.

And the human toll of the Covid-19 pandemic was laid bare in official figures indicating a toll of more than 40,000 coronavirus-related deaths in the UK.

The analysis by the PA news agency includes deaths from Covid-19 and where it has been mentioned on the death certificate as a factor.

The move to unlock the housing market will enable buyers and renters to complete purchases and view properties in person, while visiting estate agents, developer sales offices or show homes will also be allowed.

The Government estimates more than 450,000 buyers and renters have been unable to progress their plans to move house since lockdown measures were introduced in March.

Millions of self-employed workers will be able to apply for grants of up to £7,500 from Wednesday, with payments due to land within six days, the Government has said.

A new report by the Institute for Public Policy Research said financial measures brought in to deal with the lockdown were protecting landlords and banks more than families.

Office for National Statistics data showed care home deaths accounted for some 40% of coronavirus-related fatalities registered in England and Wales in the week ending May 1.

Communities Secretary Robert Jenrick added: ‘Spending time outdoors, exercising or just enjoying the countryside is essential for our physical health and wellbeing. The restrictions have impacted everyone, but particularly those without much living space or a garden.

‘We want to make life as healthy, bearable and social as possible, whilst controlling the virus and saving lives. That is why we have worked to find safe ways to enable more people to spend more time outdoors.’