Back to work day TWO: 90%of firms say they are ready to start in three weeks

Nine out of ten firms shut down because of coronavirus believe they can restart again within three weeks as millions returned to work for a second day today.

There were more grim scenes on the Tube and buses this morning as the British Chambers of Commerce (BCC) said its survey of 600 firms found that 70% had furloughed staff, showing how the job retention scheme had prevented redundancies.

Nine out of 10 of those questioned said they would need three weeks or less to reopen, as and when the Government eased restrictions, while three out of four firms have said they could implement social distancing measures and almost as many were confident of making provisions for remote working.

But there is increasing concerns about the lack of safe social distancing on public transport, especially in London where passenger numbers are up 7 per cent in a week.

London Bridge station has seen a spike of 25 percent more people commuting in the past week while Waterloo is up 20 per cent, MailOnline understands. 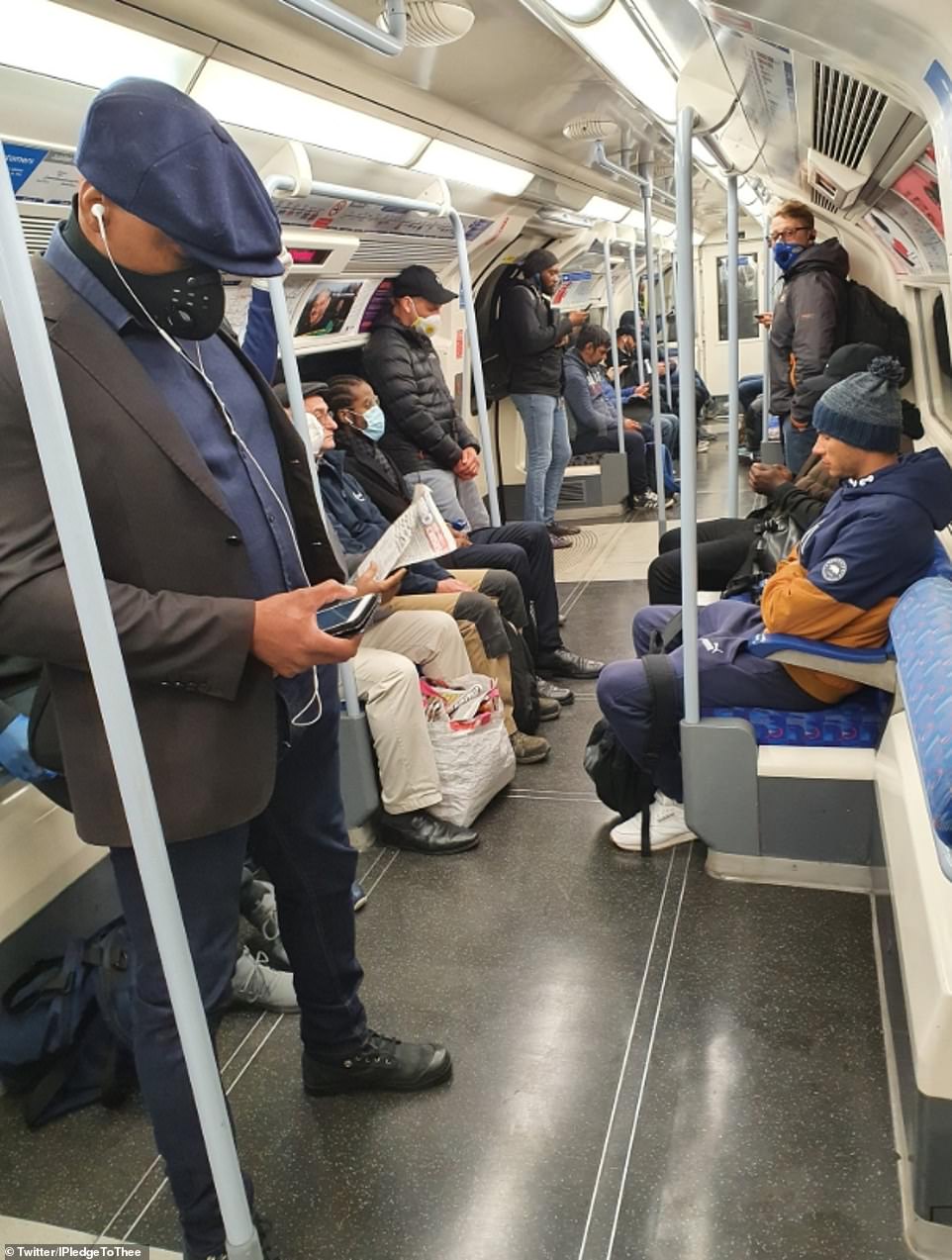 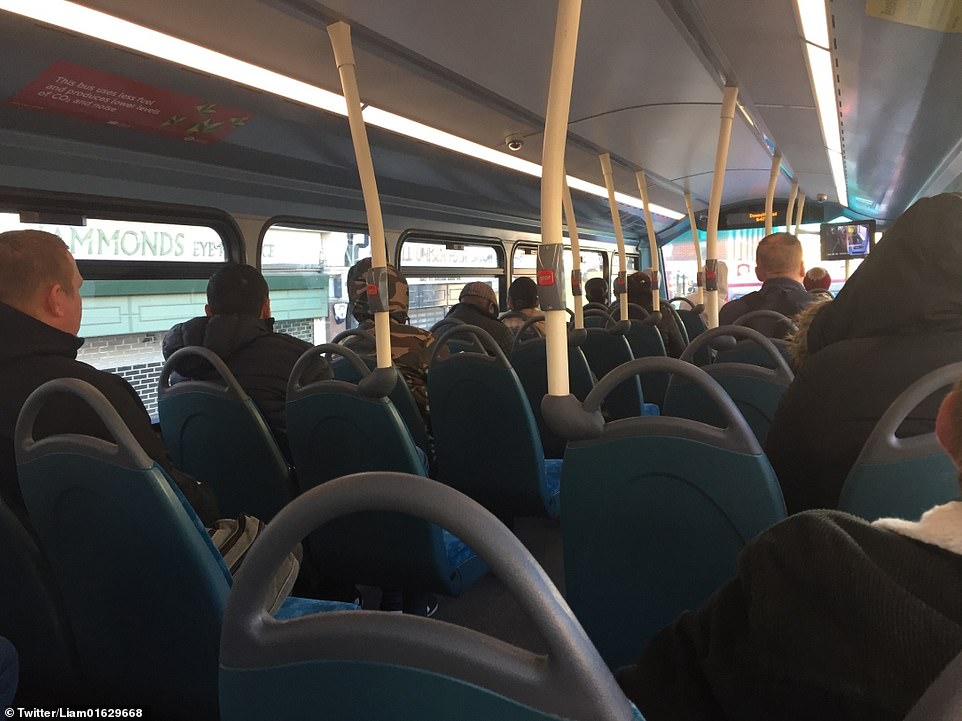 Most firms can restart their business with up to three weeks’ notice and are confident of implementing social distancing measures or remote working, new research by the British Chambers of Commerce suggests

Transport for London (TfL) said the number of passengers using the Tube between 4am and 10am on Wednesday was up by 7.3% compared with the same period last week. 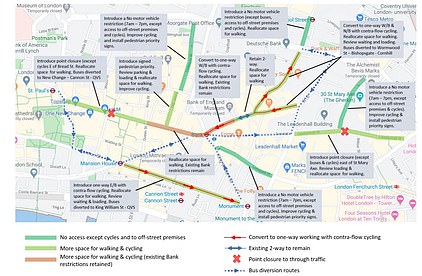 Cars and taxis are set to be banned from some of the capital’s busiest roads to make way for cyclists and pedestrians despite increasing traffic and social distancing becoming a ‘joke’ on public transport.

The City of London Corporation claims closing major routes through the financial district will be ‘pivotal’ to keeping people safe during the pandemic despite the Government’s advice being clear that: ‘You are very unlikely to be infected if you walk past another person in the street’.

Transport chiefs want to impose 12 or 24-hour closures for cars and divert buses off its main routes including Cannon Street, Poultry, Lombard Street, Old Broad Street and Threadneedle Street, home to the Bank of England.

Without the vehicles, pavements will be widened, new cycle lanes created and extra space for queuing outside shops and cafés, with the plan expected to be approved by the Square Mile’s planning committee tomorrow as the City of London’s 550,000 workers start returning to offices as the lockdown eases.

But critics have slammed the proposals saying the closures will make things worse for commuters who must travel to work in London, especially when Boris Johnson has suggested that people drive as well as walk or cycle to work. Traffic in the capital is up two per cent compared to a week ago, according to TomTom, and increasing with each week as the nationwide travel ban ends.

But defending the plan Catherine McGuinness, policy chief for the Corporation of London, said: ‘Even a small increase in the number of people using cars, taxis and private hire vehicles to commute is likely to lead to an unacceptable level of congestion on central London’s street network’.

Mayor of London Sadiq Khan has been urged to get a grip and increase services immediately to ease the severe overcrowding, which has happened without a massive surge in passengers.

Around 230,000 journeys are expected on the Tube today – compared with 4million pre-lockdown – but there are not enough services to carry them safely, with waits of up to 20 minutes per train causing packed platforms and rammed carriages.

But businesses have said they will soon be ready to start up again.

BCC director general Dr Adam Marshall said: ‘The job retention scheme has been successful in its aim to protect livelihoods and its extension will come as a huge help and a huge relief for businesses across the UK.

‘The Government should continue to listen to business and evolve the scheme in line with what’s happening on the ground. Further, phased support may yet be needed for companies who are unable to operate for an extended period, or those who face reduced capacity or demand due to ongoing restrictions.

‘Government guidance signals big changes for the way that many businesses operate, and some firms will now need time to plan and speak to their employees so that they can return to work safely.

‘Alongside this guidance, businesses urgently need clarity on the future of Government support schemes, which must be adapted to help those firms who need to remain closed for an extended period or face reduced capacity or demand.’

A Government spokesman said: ‘It is fantastic to see so many firms ready to get back to work and fire up the engines of the economy.

‘To ensure this happens safely we have published comprehensive guidance for a variety of different workplaces and welcome businesses supporting their staff to work at home.

‘This remains a challenging period for businesses and so we have extended our Job Retention Scheme, which already supports more than 7.5 million jobs and almost a million businesses.

‘Firms can also continue to draw upon the Government’s business loan schemes, as well as the various grants and tax deferrals we have introduced.’

Initial data published on Wednesday indicated small increases in road traffic across the country, but concerns were raised about crowding on public transport in London.

There appeared to be no initial reports of an influx of visitors in beauty spots like the Lake District, with people now permitted to travel to the countryside alone or with members of their households.

Transport for London (TfL) said the number of passengers using the Tube between 4am and 10am on Wednesday was up by 7.3% compared with the same period last week – a rise equating to nearly 5,700 journeys.

An official spokesman for Prime Minister Boris Johnson said there had been no ‘significant’ increase in travel on the capital’s network. 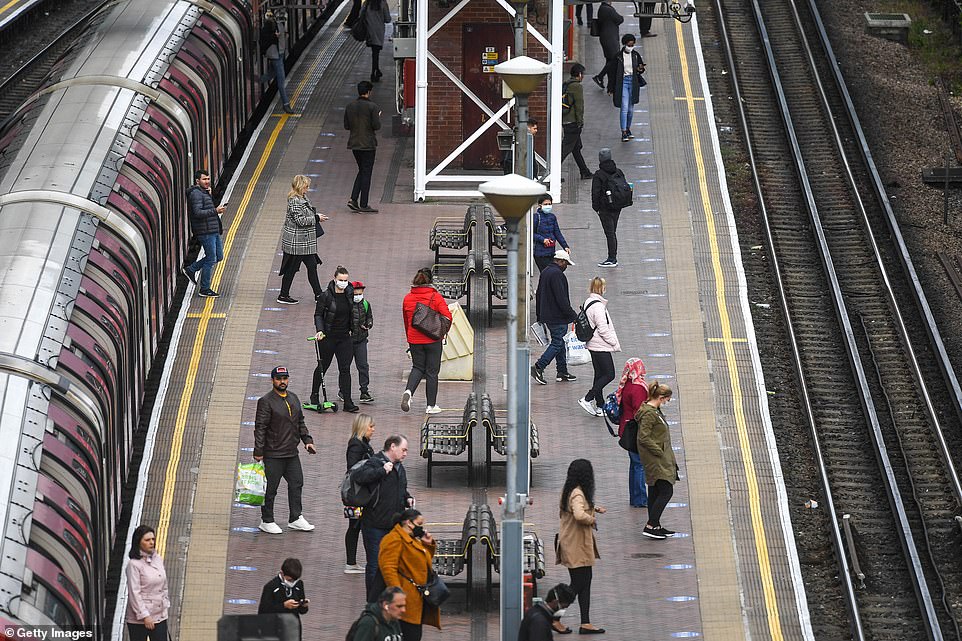 Commuters are seen waiting to board a tube train at North Acton station, many were without the recommended face masks or face coverings 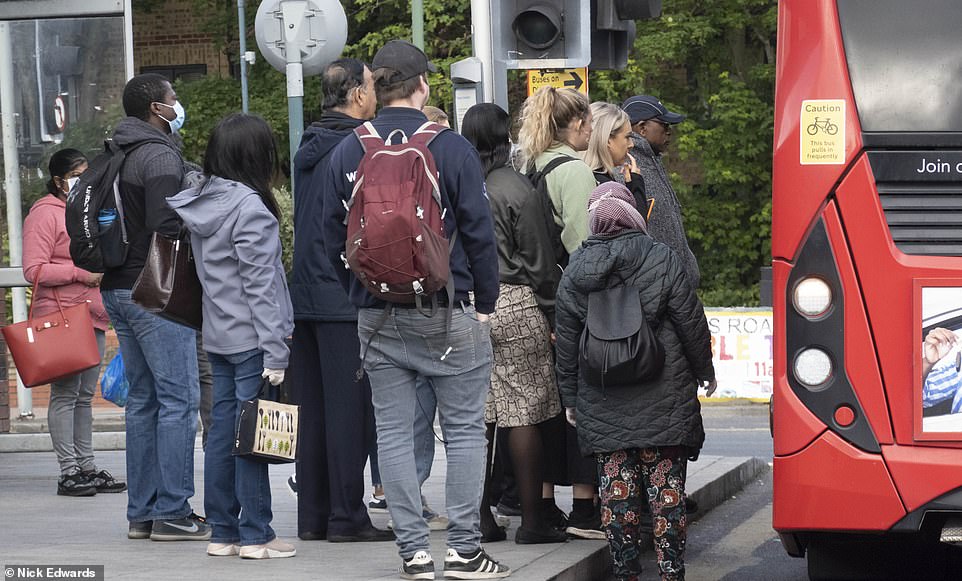 Earlier in the day Transport Secretary Grant Shapps urged people not to ‘flood back’ on to public transport, but the Rail, Maritime and Transport (RMT) union warned that the Government’s back to work message was ‘fraught with danger’ amid reports of packed carriages.

A new ‘game-changing’ and 100 per cent accurate coronavirus antibody test that can tell whether someone has had the bug has been approved for public use in the UK, public health bosses declared last night.

The test will identity everyone who has had Covid-19 with experts hopeful these people could be immune from catching it again for up to three years.

The Government is in talks with Roche, the Swiss pharmaceutical giant behind the test, to buy millions of the kits that could end the lockdown early.

Public Health England (PHE) announced scientific experts had carried out an independent evaluation of the antibody blood test at its top secret Porton Down facility, and found its results to be ‘highly specific’, identifying every sample from someone who had previously tested positive for coronavirus.

The findings have been hailed as a ‘very positive development’ in combating the coronavirus outbreak.

Scientists hope that those whose body developed antibodies after recovering from the virus could develop immunity for two or three years, making them safe to return to work. But the World Health Organisation has repeatedly cast doubt on whether people can become immune at all.

Professor John Newton, national coordinator of the UK Coronavirus Testing Programme, said: ‘We were confident that good quality antibody tests would become available when they were needed.

‘This is a very positive development because such a highly specific antibody test is a very reliable marker of past infection. This in turn may indicate some immunity to future infection although the extent to which the presence of anti-bodies indicates immunity remains unclear.’

Under the latest guidance, people who cannot work from home are encouraged to return to workplaces if it is safe to do so.

A manager at the quiet Waterloo station said that footfall throughout the coronavirus crisis had been around 5% of normal, and had risen to around 10% on Wednesday morning.

He said some 50,000 people per hour usually pass through the station during peak times in normal circumstances.

Out on the roads, data published by location technology firm TomTom showed that the level of congestion in the capital at 8am on Wednesday was 19%, up from 17% a week earlier.

England’s national parks had already urged caution for visitors planning to return from Wednesday – with some still telling people to stay away.

Visitors were warned that many facilities such as car parks, visitor centres and public toilets, as well as cafes and pubs, are not yet open.

A Local Government Association (LGA) spokesman also said on Wednesday that local councils were reviewing car parking provision, but would ‘balance this against avoiding the gathering of large crowds where social distancing will be difficult to maintain’.

Spokesmen for the Lake District, Peak District and Yorkshire Dales national parks suggested on Wednesday afternoon that it was too early to tell, or they were waiting to speak to rangers to see if visitor numbers had changed as lockdown measures eased.

But in the Lake District it appeared the ‘stay away’ request from local politicians and public officials was being heeded.

In Windermere, Bowness, Grassmere and Keswick, there was no influx of visitors to places popular with tourists, with shops, bars and restaurants all shuttered.

Locals suggested the situation may change at the weekend and as the days and weeks progress.

Tim Farron, MP for Westmorland and Lonsdale, has written to Mr Johnson calling for there to be a maximum limit on the number of miles people can drive for exercise to help stop a surge in people travelling to the Lake District from outside of Cumbria.

On Wednesday Mr Farron said: It’s good to hear that today so many people are heeding the advice from Cumbria Police, Cumbria Tourism and local health officials to not travel to Cumbria.

‘Of course, our main concern is what happens at the weekend.’

Colin Cox, Cumbria’s Director of Public Health, said: ‘I’d urge people to really consider whether a visit to the Lake District is the right thing to do at the current time.’

Malcolm Bell, chief executive of tourism body Visit Cornwall, said he had seen ‘no noticeable surge’ in visitors to the region on Wednesday.

‘I think we’ve got to wait for the first sunny day,’ he added, noting that conditions on Wednesday were ‘not the greatest’.

Looking ahead to the weekend, he encouraged people to not travel more than an hour from their local area to enjoy the outdoors and avoid tourist ‘hotspots’.

Meanwhile, the Canal and River Trust, which looks after 2,000 miles of UK waterways, announced it was lifting restrictions on boat owners visiting their boats.

But the charity said ‘general navigation’ was still not permitted, with only minimal travel for essential repairs or services allowed and those visiting boats should expect to return home the same day.

Highways England said people should continue to stay at home as much as possible, but urged those deciding to get in their cars for the first time in several weeks to do thorough checks to ensure they were roadworthy and safe.