Backlash erupts after Muslim ALFW player refuses to wear team’s LGBTQ jumper: ‘I wonder if they would let a Christian do this?’

A Muslim footy player’s decision not to wear a pride jumper has sparked backlash with many questioning why her club simply accepted it.

Haneen Zreika will not play for the Greater Western Sydney Giants in the pride round of the AFLW competition on Friday because she doesn’t want to wear the rainbow jumpers that all players are wearing.

The round celebrates and honours the LGBTQI community but Zreika, the first Muslim woman to play AFLW, won’t pull on the guernsey citing religious objections.

Haneen Zreika will not play for the Greater Western Sydney Giants in the pride round of the AFLW competition on Friday because she doesn’t want to wear the rainbow jumpers that all players are wearing (pictured Ms Zreika, left) 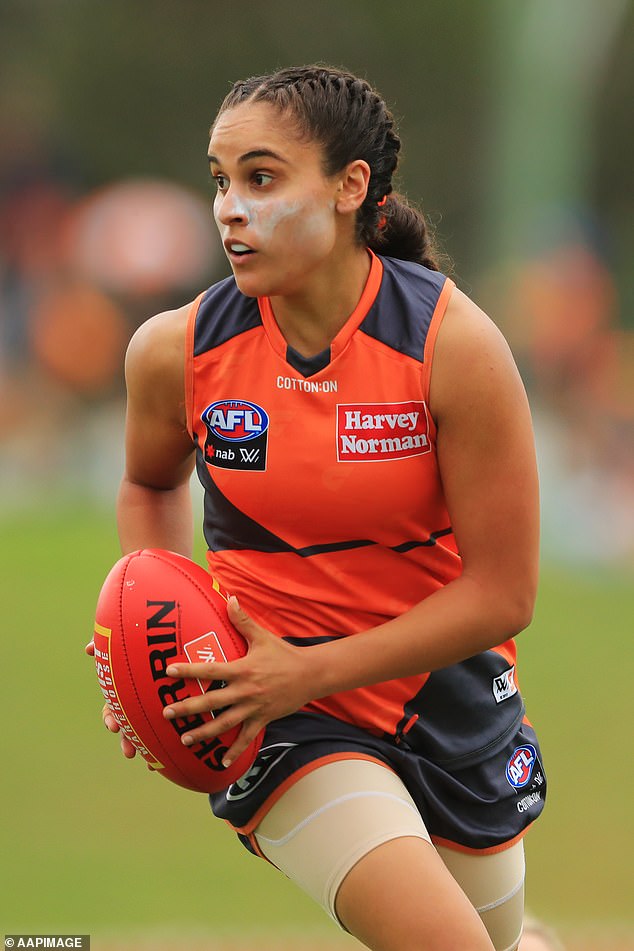 Zreika played in the annual Pride round last year, which celebrates the diversity of the game’s supporter base, but the team were not wearing themed jerseys during the 2021 season.

She even appeared in a promotional photoshoot for the round in previous seasons, but will not feature in the 2022 edition.

Several commentators have drawn comparisons with the Israel Folau affair, where the superstar was sacked from rugby union for making disparaging public remarks about same sex relationships. 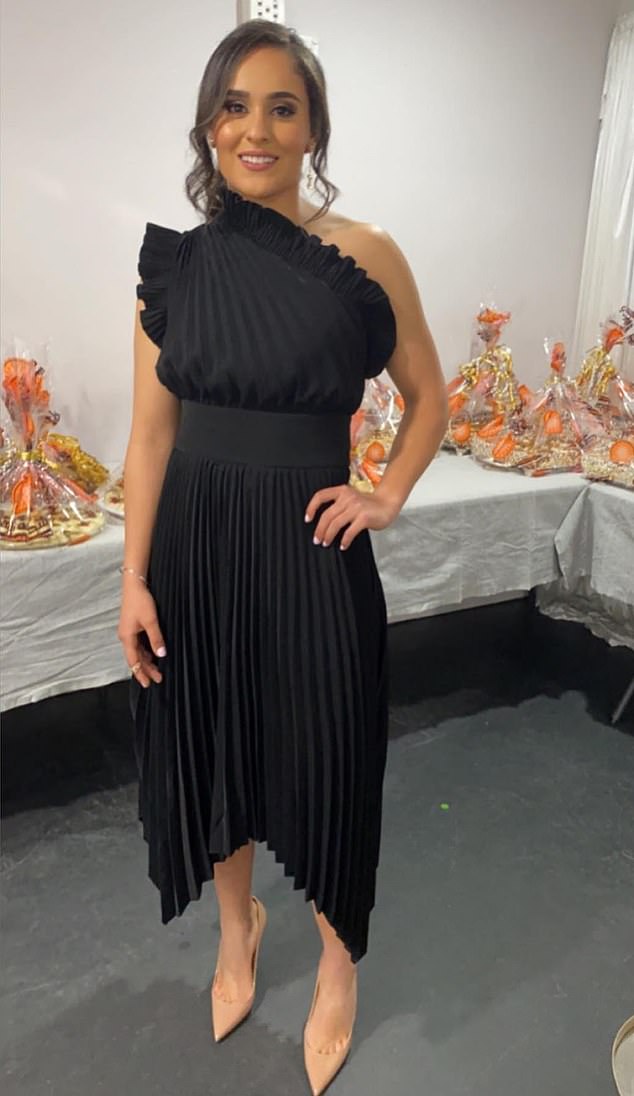 The round celebrates and honours the LGBTQI community but Zreika, the first Muslim woman to play AFLW, won’t pull on the guernsey citing religious objections 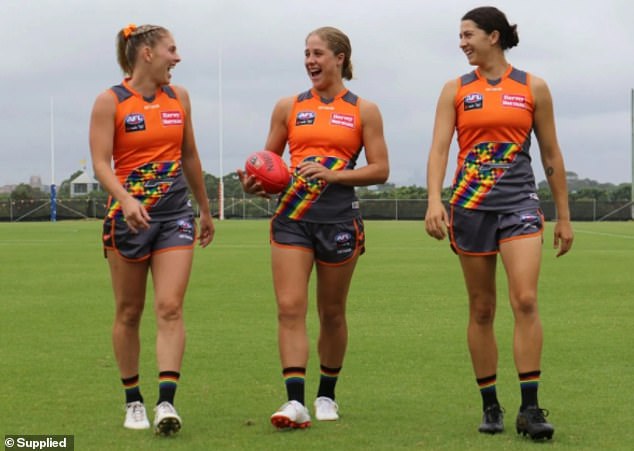 ‘I wonder if they would let a Christian do this?’ asked author Warren Mundine, referring to Zreika’s stance.

Zreika received a mixed response on social media over her stance – arguably slightly opposed to her stand.

‘So wait… you are allowed to show discriminatory behaviour based on religious beliefs towards someone’s sexuality? How does she even look at the players in the eyes after this?’

While it has been estimated that between 75 and 80 per cent of the AFLW competition identify as being LGBTQI, it is understood Zreika’s teammates support her decision.

‘Eject her from the team,’ one woman wrote on Facebook.

‘I respect all people of religion, and expect the same respect in return. Hiding behind religion because of discrimination is cowardly and abhorrent.’

‘So you’re progressive enough to be a woman playing in a male-dominated sport and fight for the Invasion Day cause, but you’re so against LGBTQ+ rights that you can’t even stand wearing a rainbow guernsey for 90 minutes? Pick a side,’ one follower said. 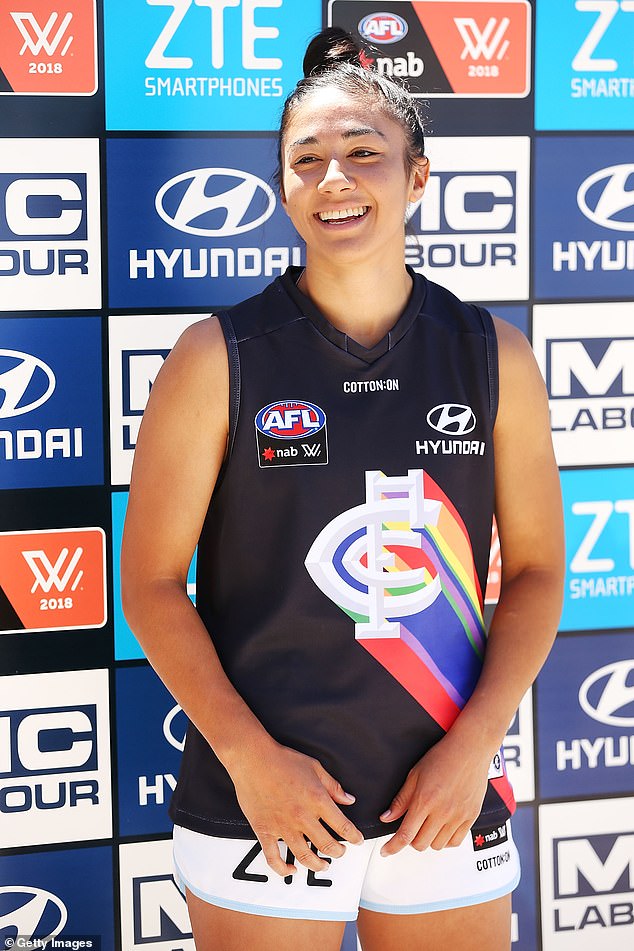 Carlton AFLW forward Darcy Vescio speaks to media while wearing the Pride guernsey. An estimated 75 per cent of AFLW players identify with the LGBTQI community 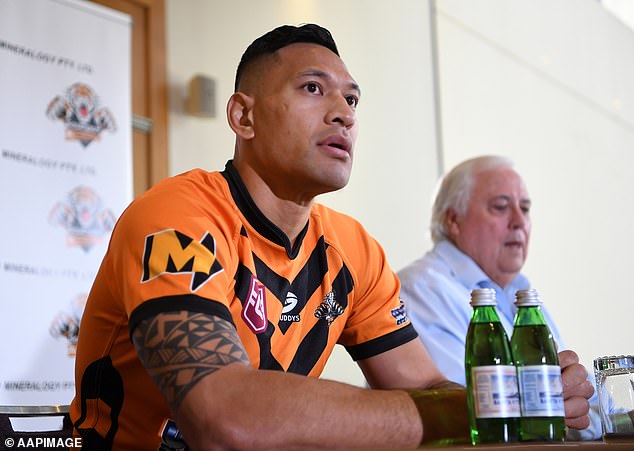 ‘Good on her,’ wrote one woman. ‘But I bet she won’t be demonised like Israel was!’

‘Proud of her for standing up for her beliefs,’ said one man.

‘We support your freedom of choice and freedom to express your opinion….and anyone who cannot do the same, I say- back off,’ wrote a Muslim woman on Facebook.

The most notable difference between Zreika and Folau is that she has quietly opted out of the game and not made public statements about sexual preference.

She is officially listed by the club as being unavailable for the match for ‘personal reasons’.

Folau’s fortunes took a nosedive after he made a series of controversial statements about homosexuality and same sex marriage including an infamous Instagram post where he said gay people were destined for hell.

He also delivered a church sermon in which he called homosexuality ‘a sin’ and was called ‘appallingly insensitive’ by Australian Prime Minister Scott Morrison.

Folau was found to have breached Rugby Australia’s code of conduct, lost sponsorship contracts and saw his Rugby Australia contract torn up in 2019, ending his career with the Wallabies.

In late 2019 he took legal action and a confidential settlement was reached with Rugby Australia.

But Folau’s personal brand was damaged during the controversies.