Bacteria-fueled jets? Scientists harvest a molecule that could one day power rockets to space

Bacteria-fueled jets? Scientists find a way to power planes by harvesting a molecule called Jawsamycin that’s made from bacteria found in soil

One of the long-term problems with air travel is its dependence on petroleum, which is a finite resource that contributes to climate change.

Researchers have figured out a way to create an alternative jet fuel by harvesting a unique carbon molecule that’s produced from a basic bacteria found in soil.

‘In chemistry, everything that requires energy to make will release energy when it’s broken,’ lead author Pablo Cruz-Morales, a microbiologist at DTU Biosustain, part of the Technical University of Denmark, says.

Knowing that the ignition of petroleum jet fuel creates a tremendous amount of energy when it’s ignited, scientists wondered if there was a way to replicate the process without relying on fossil fuels.

Researchers explained that the fuel they created would work in a similar way as biodiesel. Pictured above is the extract that contains Jawsamycin

Cruz-Morales was approached by Jay Keasling, a chemical engineer at University of California who was a postdoc in his lab at that time, who had the idea of recreating Jawsamycin – a molecule that is created by the common bacteria known as streptomyces.

The molecule is named after the film Jaws, due to its bite-like indentations.

‘The recipe already exists in nature,’ Cruz-Morales, who notes that the jagged molecule is made by the bacteria metabolizing glucose, says in a statement.

‘As they eat sugar or amino acids, they break them down and convert them into building blocks for carbon-to-carbon bonds.

‘You make fat in your body in the same way, with the same chemistry, but this bacterial process has some very interesting twists.’ 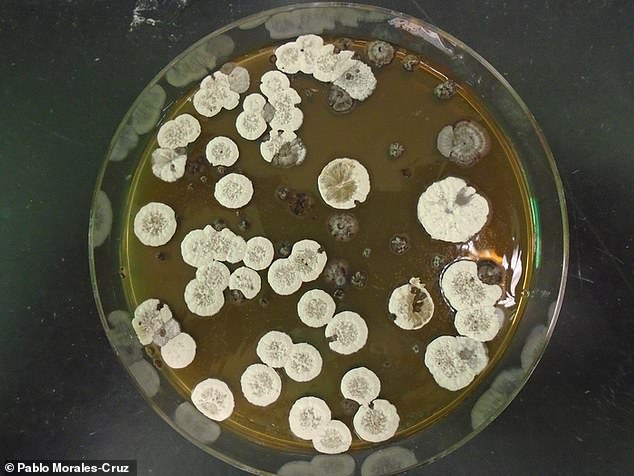 ‘The recipe already exists in nature,’ Cruz-Morales says. Pictured above is the common bacteria streptomyces that was used by researchers to make the alternative fuel

It’s those twists that give the molecules the ability to create explosive energy.

Cruz-Morales explains that the fuel produced by the bacteria would work a lot like biodiesel.

It would need to be treated so that it could ignite at a lower temperature than the temperature needed to burn a fatty acid, but when ignited, it would be powerful enough to send a rocket into space.

‘If we can make this fuel with biology there’s no excuses to make it with oil,’ says Cruz-Morales. ‘It opens the possibility of making it sustainable.’

The researchers, who published their findings on June 30 in the journal Joule, hope to scale up the process in the future so that the alternative fuel might have a chance of actually being used in jets.

‘The problem right now is that fossil fuels are subsidized,’ Cruz-Morales explained.

‘This is something that is not only related to the technology, but the geopolitical and socio-political constitution of the of the planet right now.

‘You can see this as a preparation for the moment because we are going to run out of fossil fuels, and there’s going to be a point, not far from now, when we will need alternative solutions.’