Bacteria that live on EVERYONE’S skin are becoming resistant to antibiotics, scientists warn

Bacteria living on everyone’s skin are mutating to defend themselves against medicine and could trigger a rise infections caught after surgery, scientists warn.

The bacteria are similar to the hospital superbug MRSA, which is already resistant to antibiotics.

Staphylococcus epidermis lives – usually harmlessly – on everyone’s skin but can get into wounds after surgery and cause serious infections.

One researcher has called it ‘a deadly pathogen in plain sight’ and warned experts to take it more seriously and find the most vulnerable people.

A common skin bacteria which is thought to cause infections after surgery is mutating and becoming resistant to antibiotics, scientists warn (pictured, a 3D illustration of staphylococcus bacteria on human skin)

Scientists at the University of Bath have identified more deadly forms of the bacteria which were found on the skin of people who got infections after surgery.

They say working out which patients are carrying this more deadly type could help doctors prevent or quickly treat post-operative infections.

And because new bacteria are constantly finding their way onto people’s skin, the drug-resistant, dangerous strains could spread easily.

‘It’s always been ignored clinically because it’s frequently been assumed that it was a contaminant in lab samples or it was simply accepted as a known risk of surgery.

‘Post-surgical infections can be incredibly serious and can be fatal.

‘Infection accounts for almost a third of deaths in the UK so I believe we should be doing more to reduce the risk if we possibly can.

‘If we can identify who is most at risk of infection, we can target those patients with extra hygiene precautions before they undergo surgery.’

In their research, the scientists found 61 differences between the genes of the bacteria on the skin of patients who had become infected after a hip or knee replacement or bone-fixing operation, and those on healthy patients.

The gene changes make types of staphylococcus epidermidis more likely to cause life-threatening illness, and could potentially be identified using skin swabs.

A small number of healthy patients also carried the more deadly bacteria, suggesting they would be more likely to get infected if operated on.

The deadlier strains of the bacteria are better equipped to spread in the bloodstream and avoid the immune system, meaning they could trigger fatal illness.

The changed genes also make the bacteria’s cell surfaces sticky and enable them to form a protective film, making them resistant to antibiotics.

Professor Sheppard added: ‘Because the bug is so abundant, they can evolve very fast by swapping genes with each other. 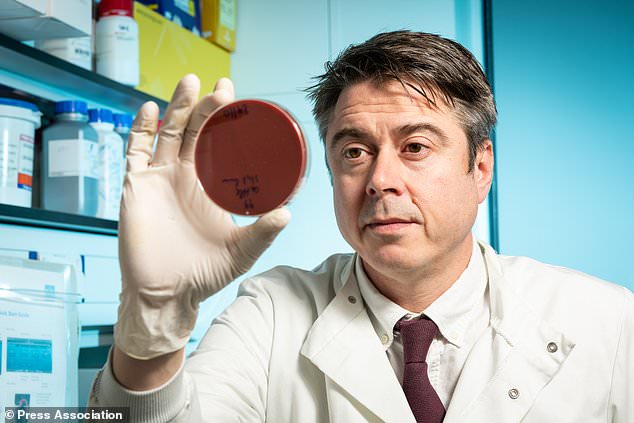 Professor Sam Sheppard, from the University of Bath, said if scientists don’t take the threat of staphylococcus epidermidis seriously the number of people getting infections after routine operations will rise

‘If we do nothing to control this, there’s a risk that these disease-causing genes could spread more widely, meaning post-operative infections that are resistant to antibiotics could become even more common.’

‘These infections are difficult to diagnose and there is hope that disease-associated genes may help to separate harmless skin isolates from disease-causing S. epidermidis strains in the clinical laboratory.

‘This needs to be addressed in future studies.’

The study was published in the journal Nature Communications.

WHAT ARE STAPHYLOCOCCAL INFECTIONS?

Staphylococcal, or ‘staph’, infections are caused by the bacterium Staphylococcus.

These can cause relatively minor skin infections, such as boils, as well as serious ones affecting the blood, lungs and heart.

Most infections are caused by a group of bacteria called Staphylococcus aureus, which includes MRSA. MRSA is resistant to certain antibiotics.

Infections affecting the skin and soft tissue include:

Around one in three people carry Staph bacteria harmlessly on their skin. 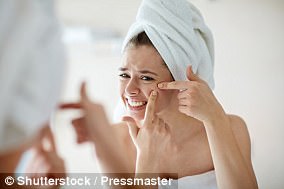 ‘Staph’infections can cause red, painful boils that typically develop on the face

It only causes problems when it enters the body via cuts, grazes or medical equipment.

Although healthy people can be affected, those with weakened immune systems, such as due to a side effect of chemotherapy, are more likely to suffer.

Boils and other more minor forms of infection do not typically require treatment.

Antibiotics may be given or a minor procedure to drain pus from the skin.

People can help to prevent Staph infections by: