A single writer who was inspired to create a blog after a string of bad dates has been bombarded with messages from women detailing their horror experiences with bed-wetters, mummy’s boys and men who clip their toenails on a first date.

The 34-year-old has filtered through some tragic dating faux-pas, and told Daily Mail Australia she’s sometimes doubled as a therapist for her readers and contributors.

Along the way, she’s learned the tell-tale signs of a liar and a narcissist and said her experience means she’s now a pretty good judge of character.

‘A lot of the submissions I get include stories about married men,’ she said, before adding there are often warning signs that can tip women off that the new man in their life is actually married. 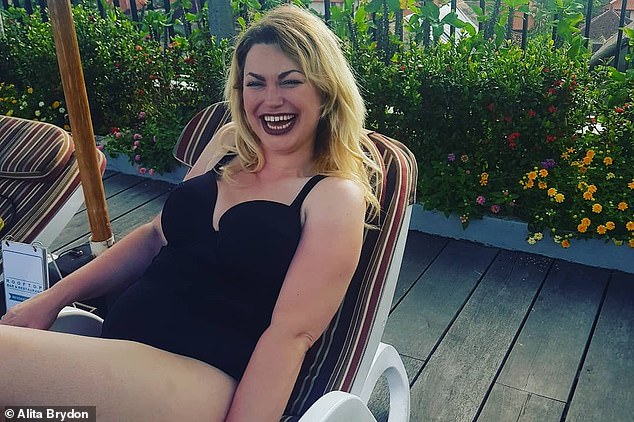 The self confessed ‘dating app addict’ once said she spent 1,460 hours swiping through potential love interests on Tinder

‘The most common story is always the same: he’s from out of town, they communicate on text for a few months and have hours of deep and meaningful chats,’ she said.

‘But he’s ”not on social media”… They finally meet again, at a hotel. One night of passion ensues, and then soon after, it is revealed he has a wife. I call these signs a “WIFE ALERT”.

‘If your romantic narrative is following this pattern, beware. I’ve read it hundreds of time and the clues are always the same.’

But Ms Brydon said sometimes a wife back at home is the least of someone’s concerns when they’re stuck on a truly terrible date.

In one submission she received, a woman said after a months-long dating drought, she found a man who she thought might’ve been a good catch.

But early into the blossoming romance, the woman was visiting his family home – where he still lived with his parents – and was asked to swap seats before dinner.

‘Confused, I obliged… and then he lifts his foot up onto her lap as she said to me – nail clippers in hand: ”Sorry love, you were in the toenail cutting chair”,’ the woman said.

The worst of the worst: BDOM founder shares the most horrific submissions she’s received

‘He lived at home. I was sitting at the table with his family having tea, when his mum asks me to swap chairs. Confused, I obliged… and then he lifts his foot up onto her lap as she said to me – nail clippers in hand: ‘Sorry love, you were in the toenail cutting chair.’

That’s right – he was in his mid-twenties and his mum cut his toenails for him.’

‘You could say it was a cut and run situation.’

‘I broke my leg and couldn’t walk or socialise much. I was starved for human contact and cooped up at home on the couch – so to cure my boredom I downloaded Tinder. I wrote in my bio that I was currently one limb down. Up pops a cute boy with good banter who said he would be my knight in shining armour and come to my rescue. We decide to meet at a nearby bar by the beach – but by the time I arrive he was already a bit drunk.

Honestly, I wasn’t feeling the vibe. He starts throwing a tantrum, saying that I led him on and that he travelled an hour across the city just to see me. He said he didn’t have any transport back to his house at this time of night. So he TAKES the crutches and literally RUNS off with them into the moonlight.

In the morning I get a message from him on Tinder apologising profusely – saying he just wants to come over and kiss me better. UNMATCH! I’ve got zero time for a crutch thief!’

‘I’d been very casually dating a guy for a few weeks. Emphasis on the ‘very’ and the ‘casual’. He was nice enough. One night when he stayed at mine, we had somewhat of an argument.

He leaves early the next morning. I get a knock on my door from my housemate shortly after and she breaks the bad news. There was poo on our bathroom floor.

The silver lining of the situation was the murder mystery style investigation into the poo that ensued among my housemates in the weeks following.’

Another one of the horrible submissions Brydon has received centred around a jilted lover who, after a fight with his new fling, pooped on her bathroom floor and made a run for it.

But bad dates involving poo don’t surprise Brydon anymore. In fact, she said her Bad Dates of Melbourne blog has taught her just how ‘common grown adults sh**ting themselves really is’.

‘I didn’t realise how common it was for people to poo themselves until I started running the page,’ Ms Brydon said.

‘It’s happening all the time but no-one’s talking about it. Stay away from the spicy curries before a romantic night out. Don’t date with diarrhea.’

With more than 500,000 viewers a month, the 34-year-old writer launched a dating workshop for 2020, where she offers advice on meeting people ‘from the trenches’.

She is hosting a series of Good Swipes of Melbourne workshops, where fans of the blog pay $119 to discuss dating habits with her.

The classes are capped at 12 spaces, meaning they’re intimate enough to help work through individual concerns.

‘What makes it different from other dating workshops is that the advice comes from the trenches,’ Ms Brydon told Daily Mail Australia. 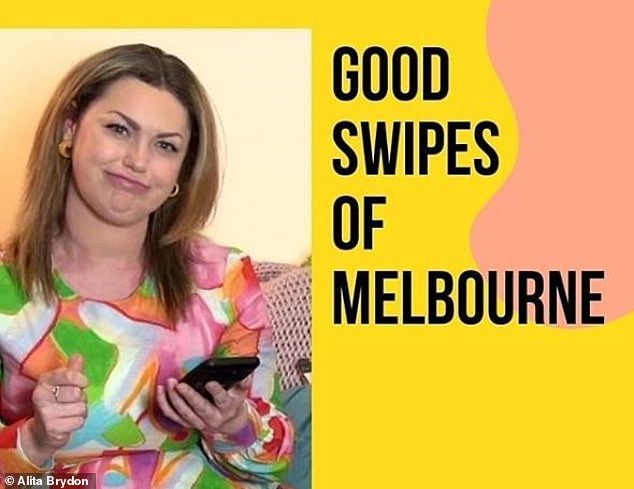 She’s seen it all dating wise and people are increasingly turning to her for advice.

‘You’ll find a lot of love and relationship advice comes from celebrities or people in relationships who haven’t swiped a day in their lives!’ she said.

‘This advice is practical and from someone who has a deep understanding of dating culture.’

HOW TO TELL IF A MAN HAS A WIFE

‘The most common story is always the same: he’s from out of town, they communicate on text for a few months and have hours of deep and meaningful chats.

‘They finally meet again, at a hotel. One night of passion ensues, and then soon after, it is revealed he has a wife.

‘I call these signs a “WIFE ALERT”.

‘If your romantic narrative is following this pattern, beware. I’ve read it hundreds of time and the clues are always the same.’

Ms Brydon spent about 1,460 hours swiping through potential love interests on Tinder in four years before taking a brief hiatus from dating apps.

She said the Tinder matches sometimes led to a first date – which would quite often be the last.

Soon enough, her readers were wanting to contribute and share their own experiences.

During busy periods, she filters through more than 120 submissions a day.

Ms Brydon is still looking for love, and is currently using Tinder and Hinge after a brief hiatus from all dating apps.

But her real dream is to be cast as the next Bachelorette, and thinks she’d make for pretty interesting viewing. 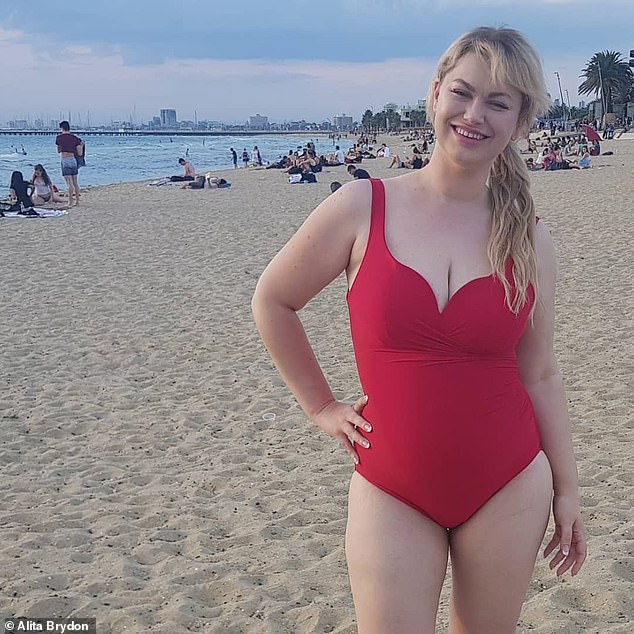 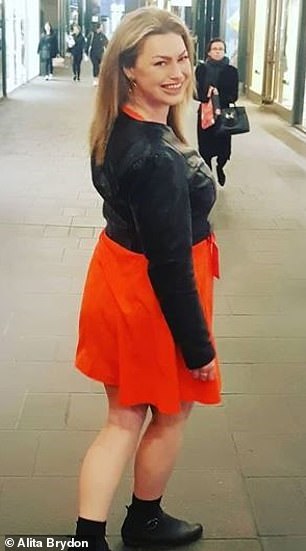 Pictured: Alita Brydon on a night out

‘My love life has always been a bit left of centre, so it kind of makes sense,’ she said.

‘I’m a pretty relaxed, genuine and funny character and I can’t think of anything better than to have a dozen babes compete for my heart. Yes, fellas, you can win my affection with chicken nuggets.’

While Bad Dates of Melbourne has blossomed into a lucrative side business, Ms Brydon said that was never the intention of the page.

She’s gearing up to launch merchandise – at the request of her followers – and runs the workshops, but said she gets the most enjoyment out of sharing people’s stories.

Ms Brydon said while she tries to share light and quirky content, she often finds herself coaching people through heartbreak, and struggles to separate work from pleasure.

‘I hear stories of people who have had their heart torn in two. I can only provide limited help,’ she said.

The most common themes are ‘ghosting’ and cheating.

Ghosting is the action of completely ignoring and going cold on somebody after dating or speaking with them. It normally implies the ‘bad date’ has ignored the other’s texts or calls and disappeared without an explanation.

She said hearing the worst of the stories still breaks her heart, but she knows she has to take the bad with the good. 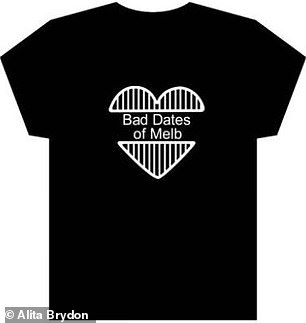 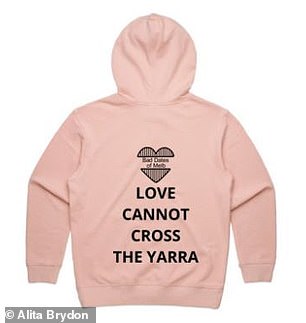