Bad news for dads: Babies ‘should share mother’s bed until age three’ because it’s good for their hearts

Babies should sleep in their mother’s bed until they are at least three years old, it was claimed last night.

The controversial advice comes from a paediatrician who found that two-day-old babies who were placed in cots slept less well than those who dozed on their mother’s chest.

Their hearts were also under more stress, it was claimed.

Sleeping alone makes it harder for mother and child to bond – and damages the development of the brain, leading to bad behaviour as the child grows up, researchers fear.

Dr Nils Bergman, of the University of Cape Town, South Africa, says that for optimal development, healthy newborns should sleep on their mother’s chest for the first few weeks

After that, they should stay in the mother’s bed until they are three or even four years old.

However, studies linking bed-sharing with an increased risk of cot death and fears that a mother will roll over and smother her child means that women are generally advised against this.

In a recent British study of sudden infant deaths, almost two-thirds of those that were unexplained occurred when the bed was being shared.

But Dr Bergman said: ‘When babies are smothered and suffer cot deaths, it is not because their mother is present. It is because of other things: toxic fumes, cigarettes, alcohol, big pillows and dangerous toys.’

Sixteen infants were studied while they slept on their mother’s chest and in a cot by her bed. Monitoring revealed the baby’s heart to be under three times as much stress when he or she slept alone. 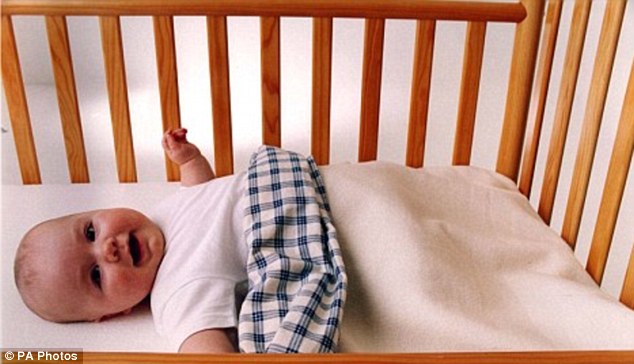 Better with mum: The study found the quality of sleep the babies had in a cot was far worse

Being in a cot also disrupted sleep, with the babies’ brains less likely to ‘cycle’ or make the transition between two types of sleep called active and quiet.

In the cots, only six out of the 16 had any quiet sleep and its quality was far worse.

Making this transition is thought to be key to the normal development of the brain.

Animal studies have linked the combination of stress and lack of sleep to behavioural problems in teenage years.

Dr Bergman said that changes to the brain brought on by stress hormones may make it more difficult to form relationships later on, leading to problems such as promiscuity.

The National Childbirth Trust is in favour of bed-sharing, as long as the parents have not been smoking, drinking or using drugs and are not obese, ill or excessively tired.

Professor George Haycock of the Foundation for the Study of Infant Deaths, said: ‘Our position as a foundation is that we owe it to the public to recommend that the safest place is in a cot in the parents’ room.’