Baddie Winkle embarks on a trip around the world

A great-grandmother who has won over millions of Instagram fans thanks to her unique, fluo-powered, at times revealing and always colorful style, has embarked on a trip around the world to fulfill her bucket list.

Baddie Winkle, 89, rose to social media fame in April 2014 after her granddaughter posted a photo of her in a rainbow-colored shirt, fringed denim jeans, and socks with pink cannabis leaves on them.

Since then, Baddie, a native of Hazard, Kentucky who grew up on a farm and worked at a machine parts factory for 28 years, has become a style icon with 3.2 million Instagram followers. Her fans include Miley Cyrus, Rihanna and Nicole Richie.

Off she goes! Instagram superstar and great-grandmother Baddie Winkle, 89, has embarked on a trip around the world to fulfill her bucket list 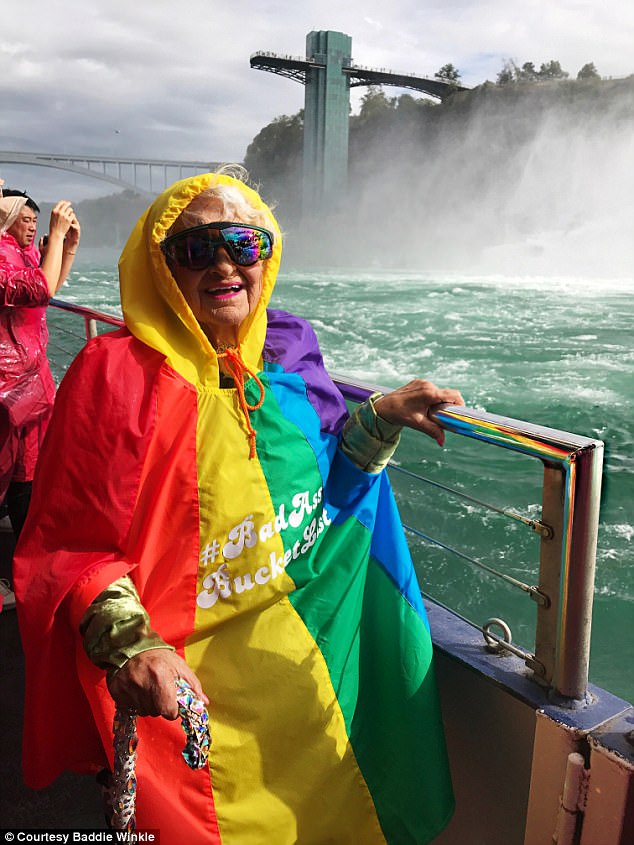 It begins: For her first stop, Baddie visited the Niagara Falls in Canada with Kennedy, her 21-year-old great-granddaughter, who is tagging along for the trip 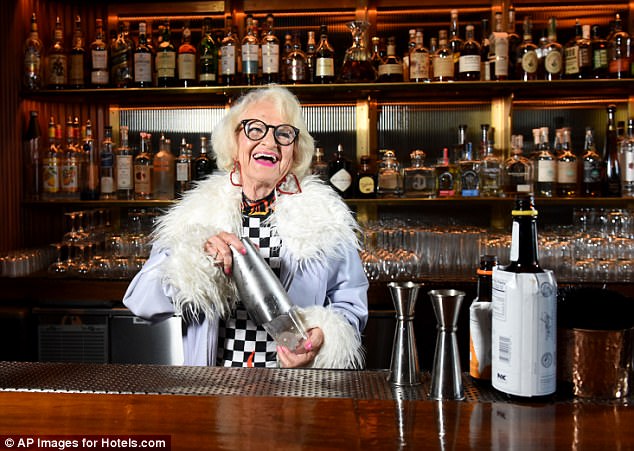 Cheers! Baddie, a native of Hazard, Kentucky, crossed off her second list item in New York City, where she learned how to mix cocktails at The Roof, a rooftop bar at the Viceroy hotel 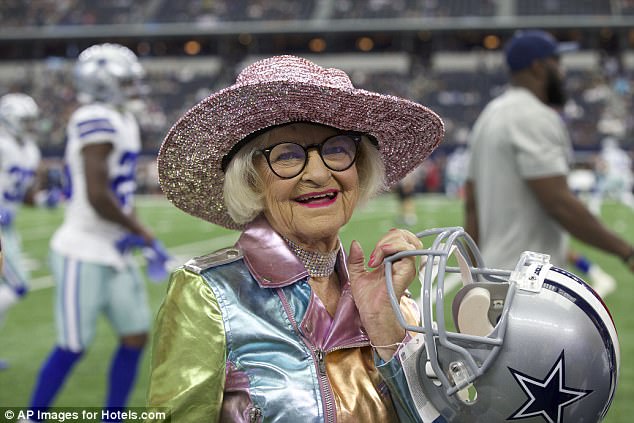 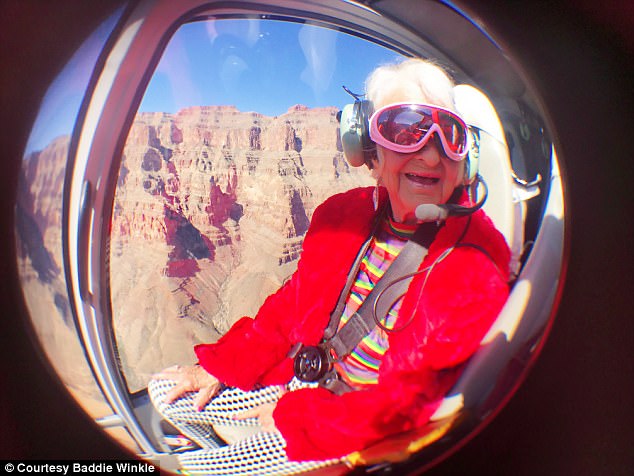 Flying high: As part of her incredible journey, Baddie also took a helicopter above the Grand Canyon. The style icon wore a fluffy red jacket on the occasion 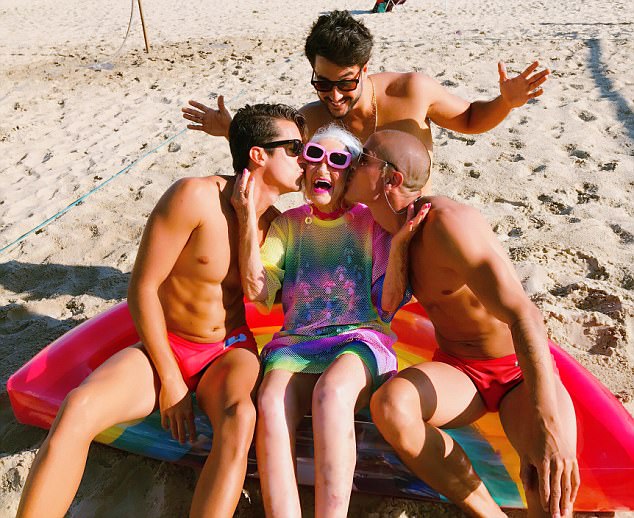 Making friends: After her Grand Canyon adventure, Baddie headed to Rio De Janeiro in Brazil, where volleyball players posed for photos with her on Ipanema Beach 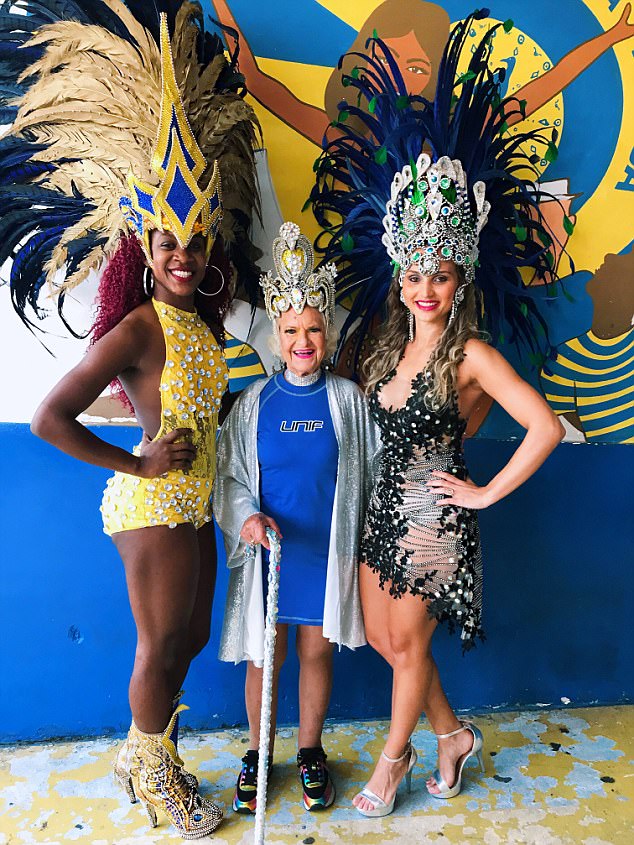 Now we dance: In Brazil, Baddie also took a samba class. She is pictured in the festive outfit she wore on that day

After conquering the world of social media, Baddie, born Helen Ruth Elam Van Winkle, is now traveling around the planet with her first great-granddaughter Kennedy, 21. Their itinerary spans the US, Canada, Brazil, the UK, Ireland and France, and they are due to tick off one bucket list item in each spot.

The pair began their adventure earlier this month and headed to the Niagara Falls. Baddie, who has traveled internationally, had seen them before, but it was a first for Kennedy, who devised the bucket list with her great-grandmother.

‘It is one of the wonders of the world,’ Baddie told Femail about their Niagara Falls excursion. ‘I was really excited for [Kennedy]. It was more exciting to see her reaction. It was for me too, because I hadn’t been there in years and it had changed a lot.’

For her second stop, Baddie learned to mix cocktail at The Roof, a rooftop bar at the Viceroy hotel in New York City. With the help of a professional mixologist, she learned how to make three drinks, including an Elyx Cup, which combines Absolute Elyx vodka, lime juice, simple syrup, cucumber, mint and prosecco. 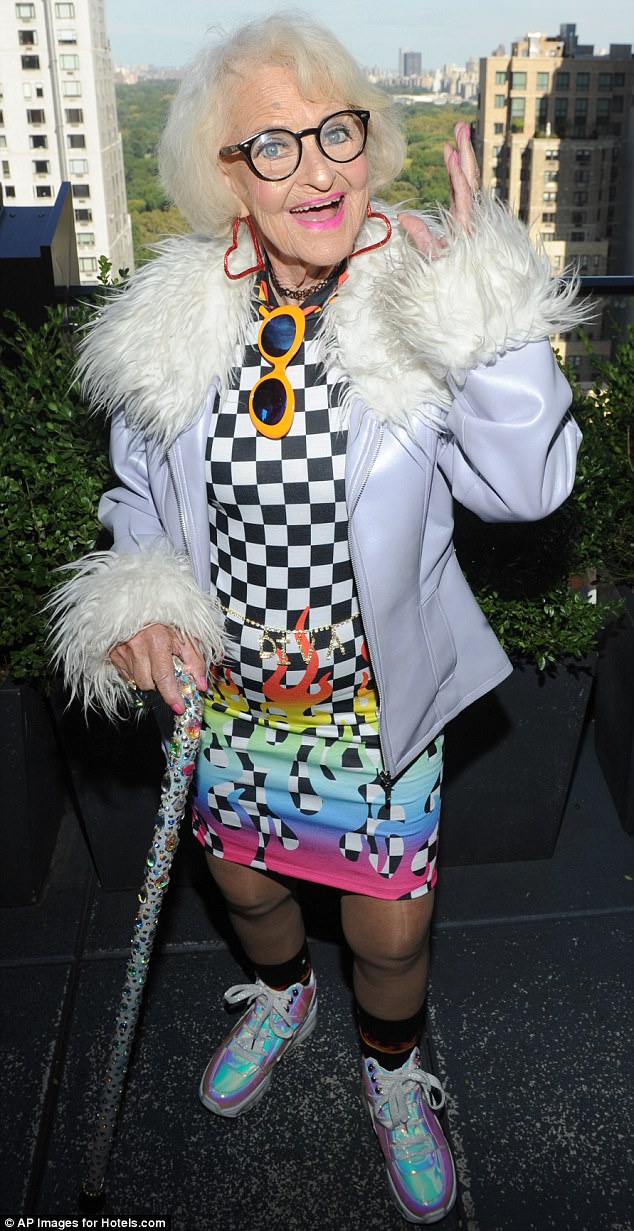 Adventure: Baddie’s itinerary spans the US, Canada, Brazil, the UK, Ireland and France. She is especially looking forward to visiting Paris and Dublin for the first time 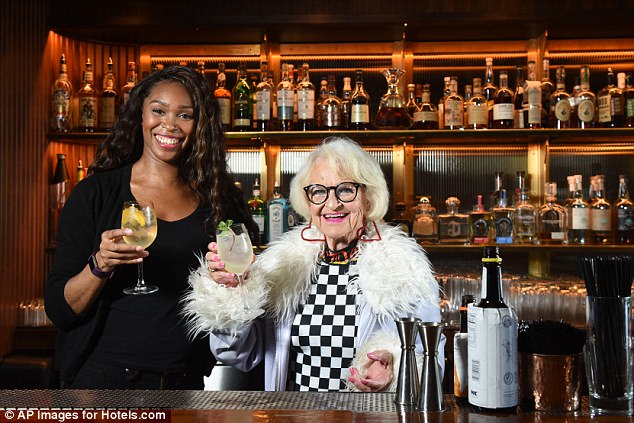 Enjoying herself: The great-grandmother (pictured with the professional mixologist who taught her to mix drinks in New York) seems to be relishing her new life 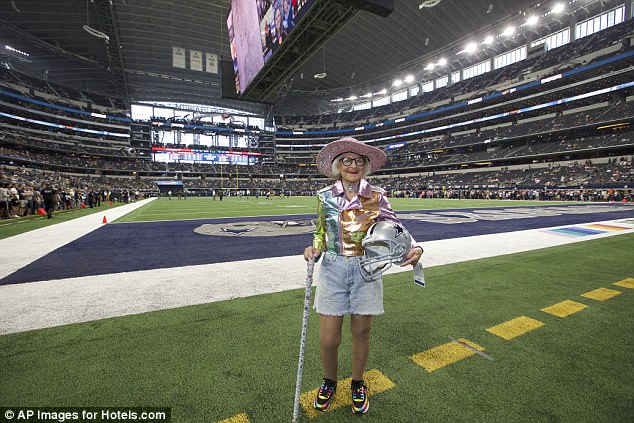 Accessories: Baddie (pictured in Arlington, Texas) has been leaning on a fabulous bedazzled walking stick, covered in sparkly stones from top to bottom, throughout her trip 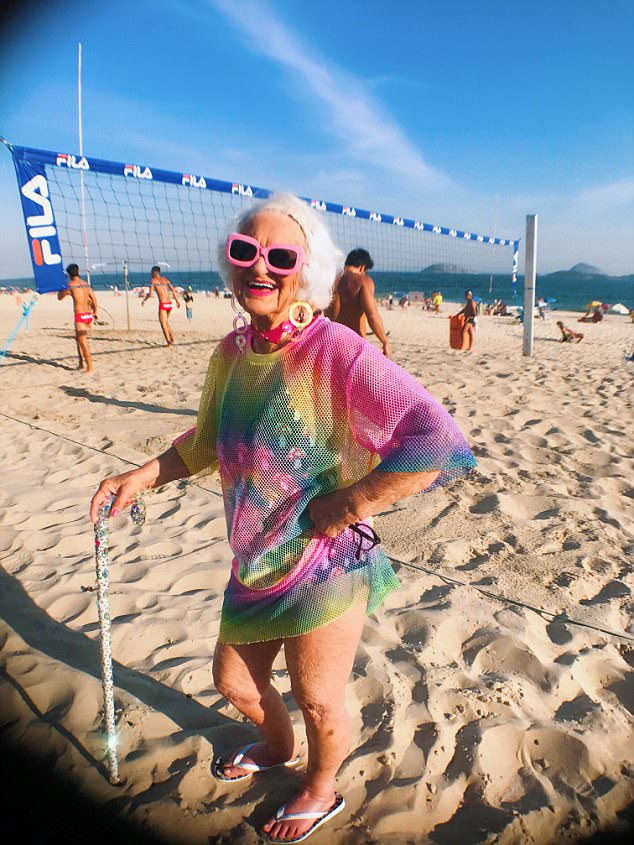 Active: While in Rio, Baddie posed for a beachside snap on Ipanema Beach on the same day she hung out with volleyball players 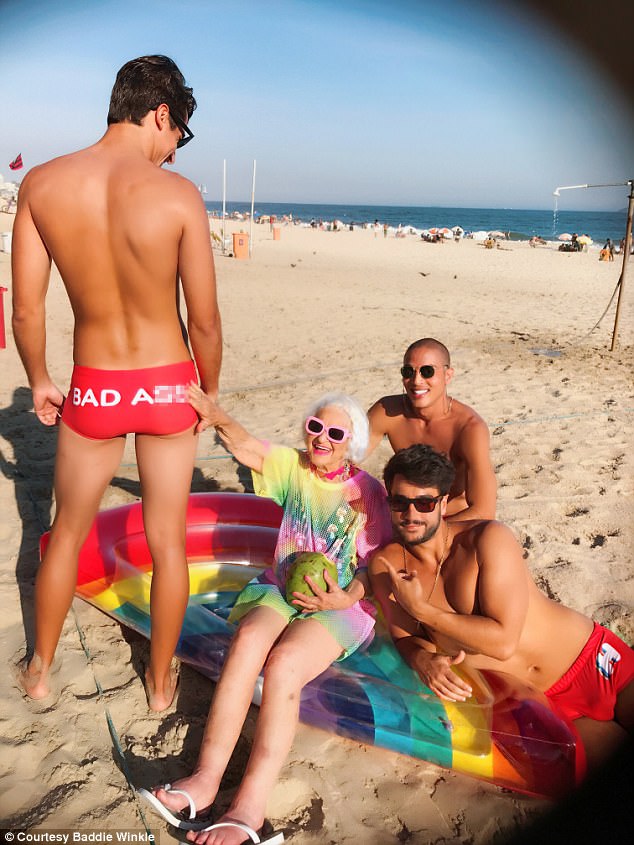 Sunny day: Baddie took time to pose for a few cheeky snaps with the volleyball players on Ipanema Beach, resting on a rainbow pool float

She then visited the Dallas Cowboys at their home stadium in Arlington, Texas and flew in a helicopter across the Grand Canyon.

Baddie later flew to Rio De Janeiro, where she hung out with volley ball players on Ipanema Beach, and also attended a samba class with locals.

3. Score a touchdown with a Dallas Cowboy

4. Ride a helicopter across the Grand Canyon

5. Take a samba class with the locals in Rio de Janeiro

7. Bag herself a prince at Buckingham Palace in London

8. Enjoy an eye-popping performance at the Moulin Rouge in Paris

9. Sing, dance and drink in a traditional Irish pub in Dublin

10. Spend the night reveling at the G-A-Y nightclub London

Then, Baddie ambitions to find herself a prince at Buckingham Palace in London, after which she will be ready for her two most-awaited destinations: Paris and Dublin.

In the French capital, she will enjoy a show at the famous Moulin Rouge cabaret, before singing, dancing and drinking at a traditional pub in the Irish metropolis.

Her trip will end in London, where she’s scheduled to party at the G-A-Y nightclub in London.

There, Baddie will meet up with one fan, who will benefit from a free hotel night as part of the great-grandmother’s partnership with Hotels.com.

During her travels, Baddie, whose social media tagline reads ‘sealing your man since 1928’, has kept her usual colorful style. She rocked a rainbow poncho to shield herself from humidity at the Niagara Falls, a shiny pastel perfecto in Dallas, and a fuzzy red jacket while flying above the Grand Canyon.

The stylish great-grandmother has also been leaning on a bedazzled walking stick, covered in sparkly stones from top to bottom.

Baddie’s trip around the world comes as she enjoys this unexpected second act, which came after what she has described as a ‘tragic’ part of her life. 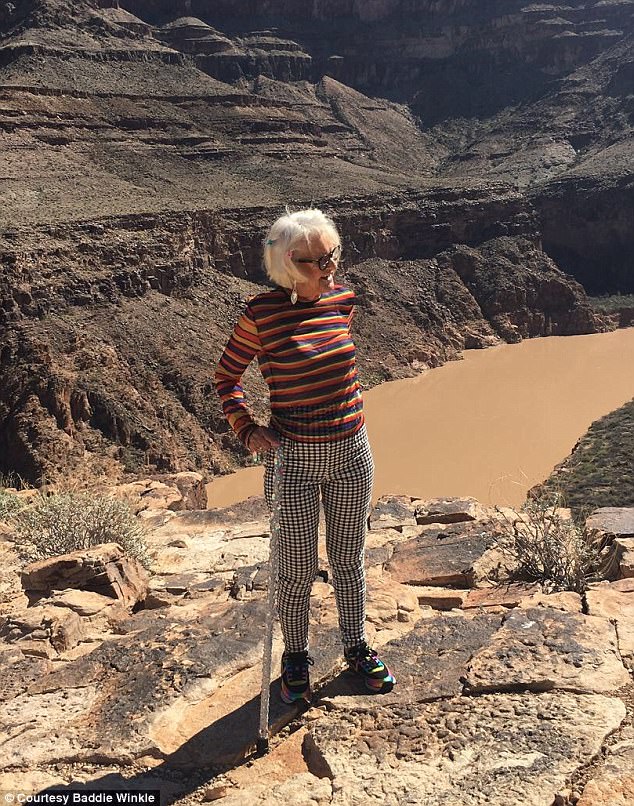 Popular: Baddie’s trip around the world (she is pictured in the Grand Canyon) comes as she enjoys this unexpected second act, which has seen her gather 3.2 million fans Owning it: The grandmother (pictured with former Dallas Cowboys coach Barry Switzer) told Femail she has always been ahead of her time and daring with her style 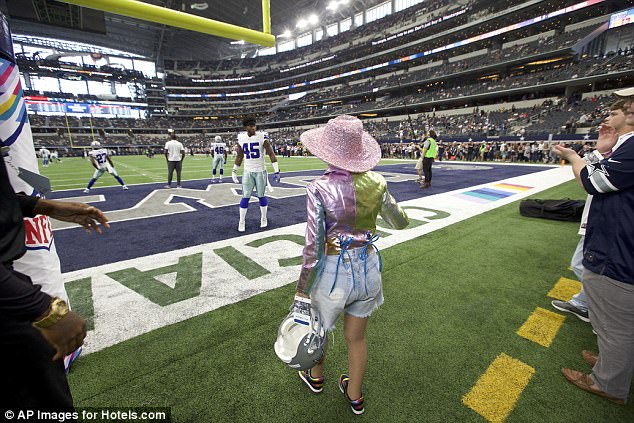 Comments: Her friends, Baddie told Femail, have been very supportive of her online adventure, although they don’t always love her outfits—not that she cares 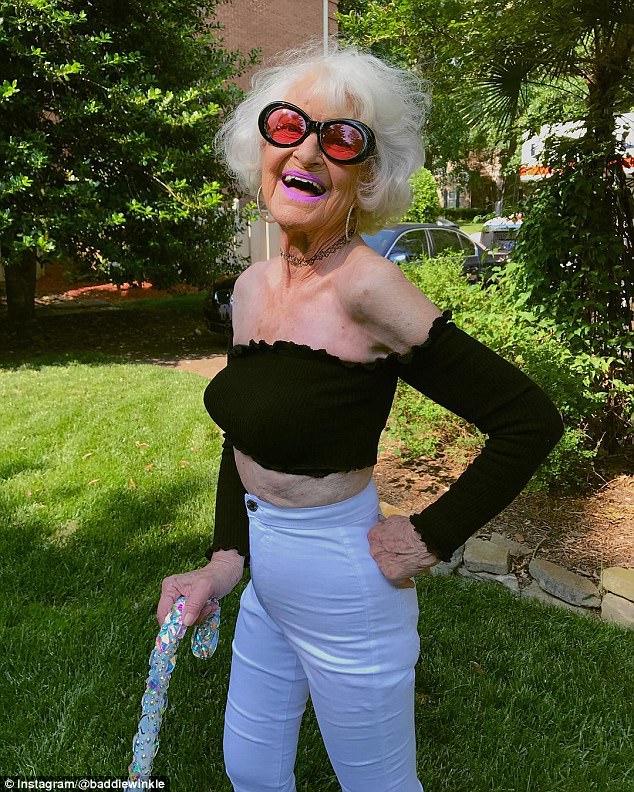 Wisdom: To those who would like to dress like her, Baddie recommends: ‘If you really like something that I’m wearing, go and buy it. Buy something similar and flaunt it, baby!’ 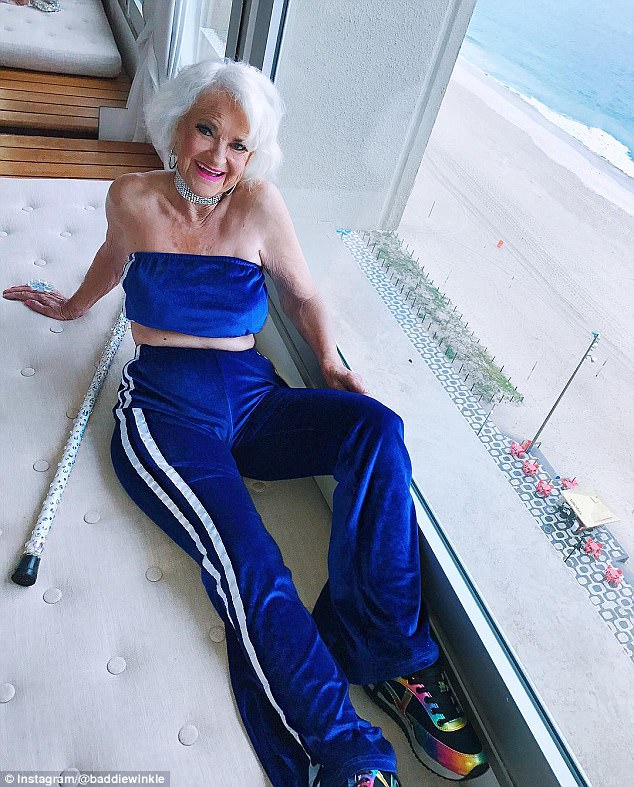 Life: Before she was a social media star, Baddie grew up on a farm and worked at a machine parts factory for 28 years. Her first photo appeared on Instagram in April 2014 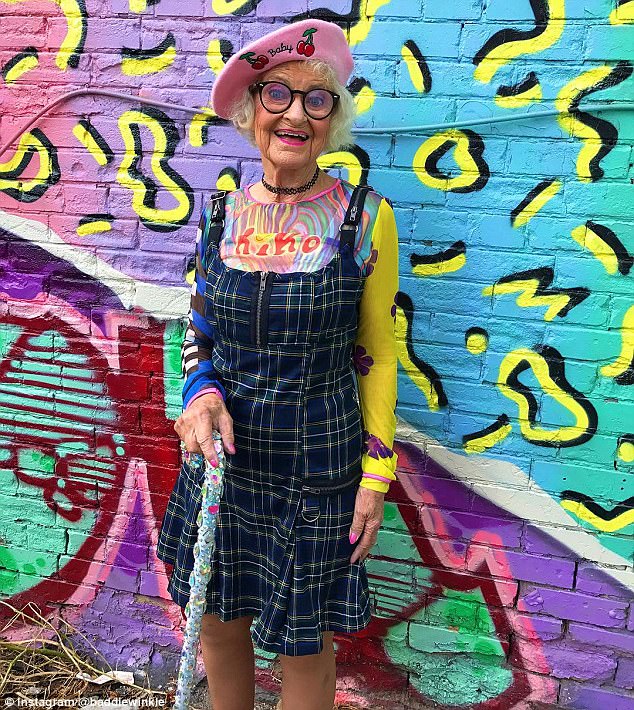 Tips: The grandmother has enjoyed learning the secrets of social media, and has distilled her wisdom into a book, Baddie Winkle’s Guide To Life, which came out earlier this year

On her 35th wedding anniversary, Baddie lost her husband, Earl George Van Winkle, in a car accident. Then, eighteen years ago, her son died of bone cancer aged 46.

‘I lost my husband and my son, and I got tired of grieving so, I reinvented me,’ she told CNN in a previous interview.

When her first photo went viral, Baddie still owned a flip phone and only knew Twitter by name. She has enjoyed learning the secrets of social media, and has distilled her wisdom into a book, Baddie Winkle’s Guide To Life, which came out earlier this year.

Her friends, she told Femail, have been very supportive of her online adventure, although they don’t always love her outfits—not that she cares.

Baddie, who says she has always been ahead of her time, recounted being the first one in her entourage to wear a short dress when they first became trendy.

‘My principal said, “Hela, your dress is a little short.” Okay. I can go home,’ she recounted.

To those who, like her, would like to be a bit more daring with her style, she recommends: ‘Do it. Just do it. If you do it one time, just once, try it out. If you really like something that I’m wearing, go and buy it. Buy something similar and flaunt it, baby! And it’s fun.’