The 2021 British Academy Film Awards saw one of its most diverse list of winners yet, as hosts Edith Bowman and Dermot O’Leary kicked off the virtual ceremony on Sunday.

The star-studded ceremony, filmed at London’s Royal Albert Hall, saw a huge night of success of international talent, with Daniel Kaluuya continuing his clean sweep with a win for Best Supporting Actor.

It came as the BAFTAs also saw a record four female nominees in the coveted Best Director category, after the academy faced backlash for a lack of diversity in its awards.

Accepting his award from Los Angeles and dressed head-to-toe in white, Daniel said: ‘Appreciate you man, thank you, thank you God thank you BAFTAs thank you to all my friend sand family thank you to my mum, thank you Proximity, Warner Bros.

‘Everyone that helped build this project together and bought it to this point, I thank all the cast, this recognition is a reflection of what we all did.’

It was a huge victory for British talent as the Get Out star remains a favourite for the Oscars later this month.

Elsewhere Yuh-Jung Young was awarded Best Supporting Actress for her work in Minari.

Over the moon! Elsewhere Yuh-Jung Young was awarded Best Supporting Actress for her work in Minari 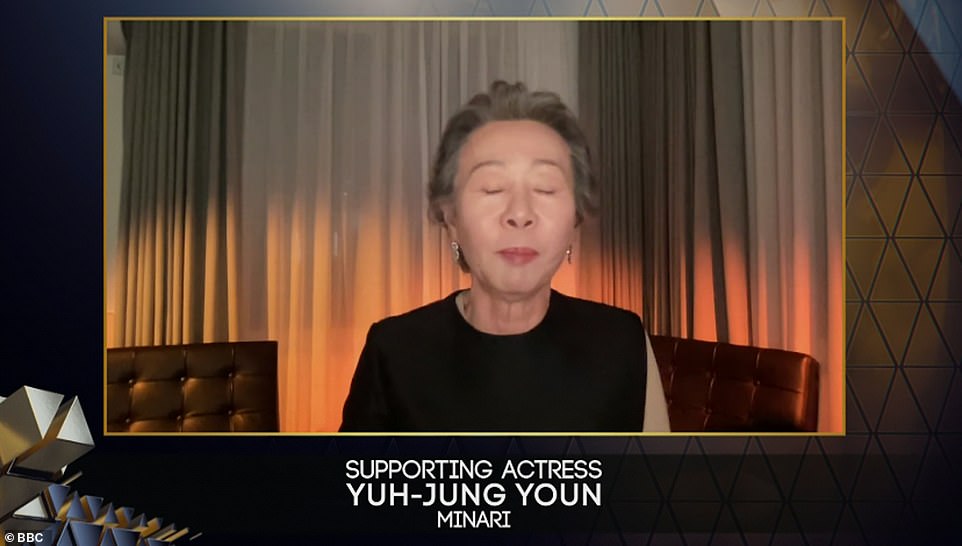 Over the moon! She said: ‘Every award is meaningful especially recognised by British people known as very snobbish people and they approve me as a good actor’

Speaking after the win, she said: ‘Well hello Britain, I am Korean actress and I don’t know how to say I’m very honoured to be nominate.

‘First expressions that I can deep condolence for your Duke of Edinburgh, and thank you so much for this award. Every award is meaningful especially recognised by British people known as very snobbish people and they approve me as a good actor.’

Following her hilarious comments towards the ‘snobbish’ English, Yuh-Jung was asked whether there was an experience behind her words.

She said: ‘My personal experience of course! I think somehow I visited Britain a lot of times and then even I had some kind of fellowship in Cambridge ten years ago. Not in a bad way, you had your history and your pride, as an Asian woman I thought these people are very snobbish.’

Brandishing a chocolate version of her prize, she gushed: ‘I only have this chocolate BAFTA which has melted in my hand because my palms are so sweaty, thank you thank you so much.

‘Focus, film nation and everyone else but most importantly and lucky chap, the amazing cast who just made the script so much better and most particularly Carey Mulligan just the greatest person the greatest actress, and huge thanks to my family for being so patient and kind, this is just a dream come true. I’m sorry I’m so shocked. I thought I’d do a better speech than this.’

Liam Payne kicked off the ceremony with jaw-dropping virtual performance that saw him duet with a wholly animated version of himself.

Hosts Edith and Dermot also began the show with a tribute to His Royal Highness Prince Philip The Duke of Edinburgh, following his death on Friday at the age of 99.

They said: ‘Before we start tonight we want to say that on behalf of BAFTA, we are extremely saddened by the passing of his royal highness Prince Philip, Duke of Edinburgh, on Friday.

‘The Duke was BAFTA’s very first president over 60 years ago and was the first of a line of royal patronage all the way through to BAFTA’s current president, his grandson the Duke of Cambridge.

‘It was Prince Philip and her Majesty the Queen’s support throughout these years that in many ways allowed BAFTA, a leading charity in the arts, to continue in difficult times and to be here today in 2021 celebrating another outstanding year of achievement in film. 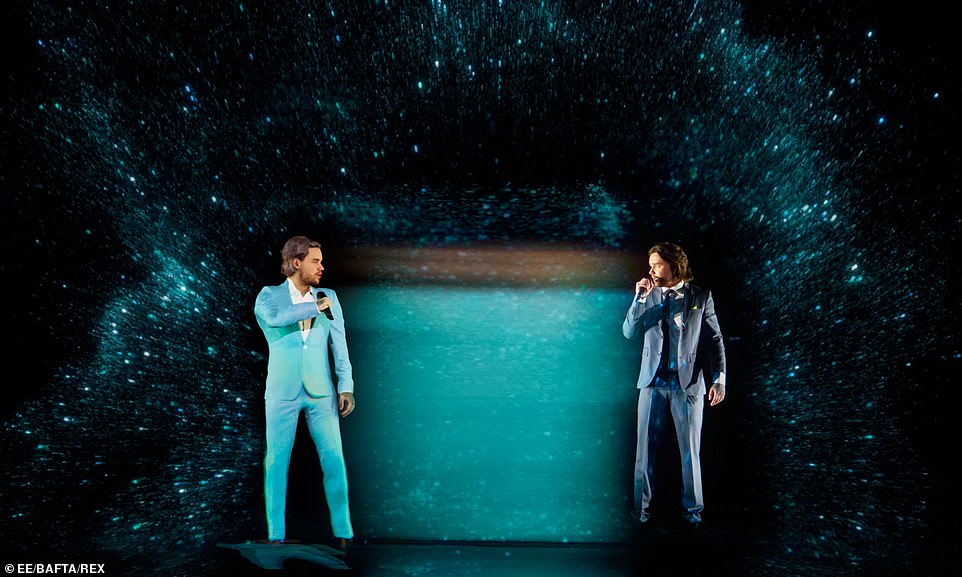 Epic: Liam Payne began the show with AR pre-show that saw the hitmaker perform with a specially-made version of himself

‘The Duke of Edinburgh occupies a very special place in BAFTA history and he will be missed. Our thoughts are with the royal family.’

Up first was the award for Animation, presented by Priyanka Chopra, which was given to Disney Pixar’s Soul, which like many films saw its release moved to streaming due to the Covid pandemic.

Best Adapted Screenplay, presented by Anna Kendrick, was presented to Florian Zeller for his work penning The Father, and following the victory, the French writer praised the land of Great Britain where he worked on the film.

He told MailOnline: ‘It was the most joyful experience of my whole life and mainly because and thanks to the crew and the people, David Parfitt our producer was the nicest man in the world and around him I have to say the crew was really nice and wonderful, so it was a joyful process.’

Best Film Not In The English Language was given to the dark Danish film Another Round, which offered a stark glimpse of the effects of binge drinking, while Nomadland scooped the award for Cinematography. 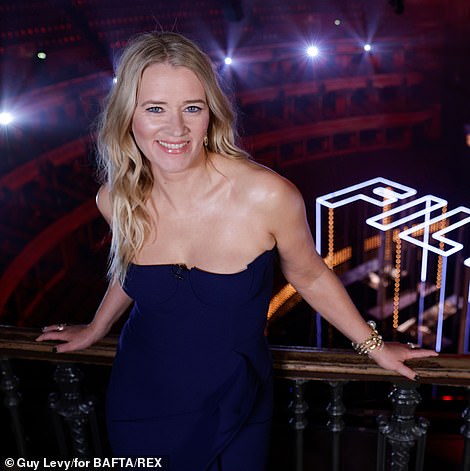 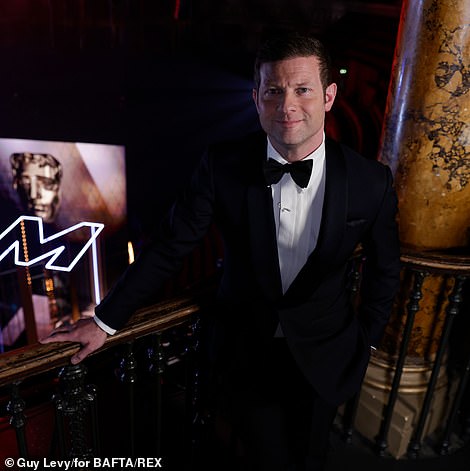 Dynamic duo: Edith Bowman and Dermot O’Leary kicked off the virtual ceremony, which was without an audience due to Covid restrictions 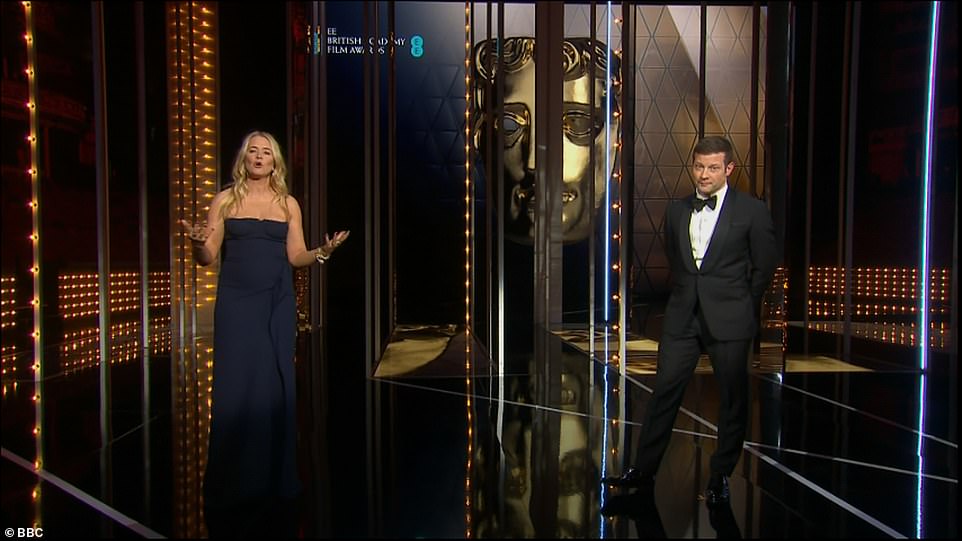 Moving: The ceremony also began with a tribute to His Royal Highness Prince Philip The Duke of Edinburgh, following his death on Friday at the age of 99

The BAFTA and EE British Academy Film Awards 2021 is the first of the Academy’s film ceremonies to be held virtually.

The TV version of the awards show took place online during summer 2020, but last year’s film ceremony managed to go ahead a month before the Covid pandemic forced the UK into lockdown.

With the pandemic still raging, another change will take place this year: the BAFTAs will happen in two parts. Both shows, recognising the very best in film of the past year, will be broadcast virtually from London’s Royal Albert Hall.

The first show celebrates the craft of film while the second main show will feature the mainstream awards. 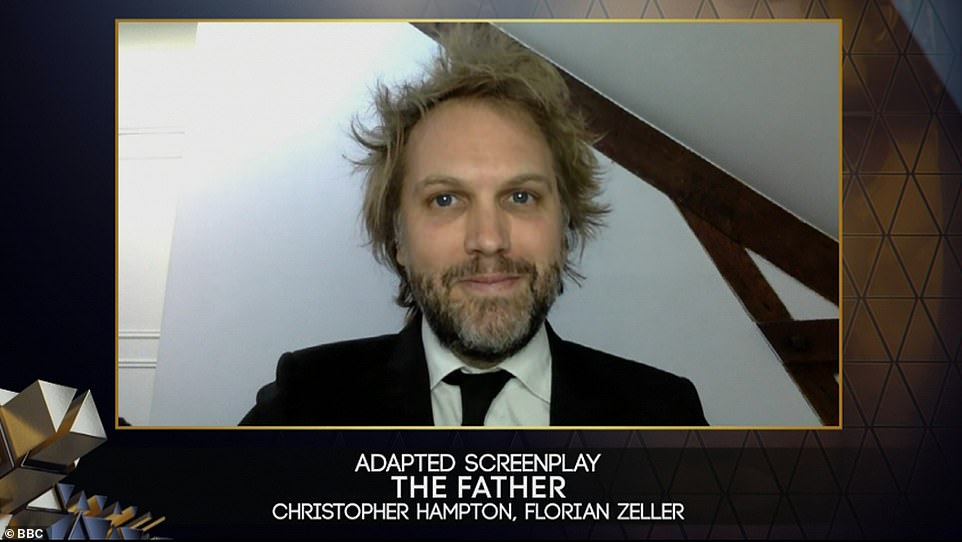 Praised: Best Adapted Screenplay, presented by Anna Kendrick, was presented to Florian Zeller for his work penning The Father, and following the victory, the French writer praised the land of Great Britain where he worked on the film

Show one was hosted by Clara Amfo on Saturday night and saw eight of the 17 gongs awarded.

During the broadcast it was revealed that Ma Rainey’s Black Bottom won two awards: Costume Design and Make Up & Hair.

Show two was fronted by Dermot O’Leary and Edith Bowman from London’s Royal Albert Hall where the acting prizes will be given out, and no audience was present.

Both programmes were being broadcast in all major territories around the world and a total of 50 feature films received nominations this year.

Presenters appeared during the ceremony from both London and Los Angeles, but all nominees will accept their prizes virtually in front of a virtual audience watching from home.

Prince William , who is president of BAFTA, was due to feature on Saturday in a pre-recorded conversation with costume designer Jenny Beavan and make-up and hair designer Sharon Martin, but pulled out following the death of his grandfather the Duke of Edinburgh.

On Sunday, he was to deliver a speech via video, celebrating the resilience of the film industry over the past year – but BAFTA has confirmed he will no longer be taking part in the ceremony.

The Duke of Edinburgh, who died yesterday at Windsor Castle at the age of 99, was BAFTA’s first president, serving from 1959 to 1965, and continued to support the organisation throughout his life.

Among the prizes announced on Sunday will be the public-voted EE Rising Star Award and the Fellowship, BAFTA’s highest honour.

BAFTA had also announced their most diverse list of nominees in the awards’ 74-year history.

In a first, four women have been nominated in the Director category. Three of the nominated directors are also nominated for Film Not in the English Language.

As part of BAFTA’s pledge to support fresh talent, four of the five nominated films in Outstanding Debut are also nominated across other categories, with first-time nominees accounting for four of the six nominated Directors and 21 of the 24 nominees in the performance categories.

In the past year, BAFTA undertook a wide-ranging Review, signalling the beginning of a significant cultural shift within the organisation.

The changes introduced for the Film Awards are the first phase in an ongoing process of levelling the playing field for all entered films.

Krishnendu Majumdar, Chair of BAFTA, said of this: ‘This year’s nominations showcase and celebrate the remarkable range of performances and nominees behind the camera from 50 films and we’re delighted to recognise such high-quality work.

‘We are also delighted to see the strength of British film shine through in all categories.

‘After last year’s nominations, we started the BAFTA Review process with the intention of levelling the playing field and introduced​ a range of measures to ensure that all entered films were seen by our members and judged on merit.

‘We hope today you can see some of those changes reflected in the breadth and depth of those nominated and we congratulate all our nominees.’

Marc Samuelson, Chair of the BAFTA Film Committee, said: ‘It has been an extremely tough year for everyone, including for cinemas and for the film industry, so we are looking forward to some fun, and a celebration of great talent across the weekend.

‘The industry and film lovers are coming together to shine a spotlight on the creativity and craft behind the 50 nominated films, and to recognise and celebrate the efforts of the industry to keep going during this particularly challenging time.’

VANESSA KIRBY Pieces of a Woman

MADS MIKKELSEN Another Round

THE TRIAL OF THE CHICAGO 7 Stuart Besser, Marc Platt

OUTSTANDING DEBUT BY A BRITISH WRITER, DIRECTOR OR PRODUCER

FILM NOT IN THE ENGLISH LANGUAGE

ANOTHER ROUND Thomas Vinterberg

THE TRIAL OF THE CHICAGO 7 Alan Baumgarten

THE OWL AND THE PUSSYCAT Mole Hill, Laura Duncalf – WINNER

ANOTHER ROUND Tobias Lindholm, Thomas Vinterberg

THE TRIAL OF THE CHICAGO 7 Aaron Sorkin

NEWS OF THE WORLD Dariusz Wolski

THE ONE AND ONLY IVAN Santiago Colomo Martinez, Nick Davis, Greg Fisher