Bagpiper, 37, is left stunned after receiving an anonymous letter branding him a ‘public nuisance’

Award-winning bagpiper, 37, is left stunned after receiving an anonymous letter branding him a ‘public nuisance’ for making a ‘horrendous racket’ and a ‘disgraceful disturbance’

An award-winning bagpiper was left stunned when he received an anonymous complaint in the post referring to him as a ‘public nuisance’ and calling his music ‘horrendous racket’.

Alan Jamieson, 37, who has played the bagpipes since he was 10 years old and won a series of competitions, has recently started practising outside his home in Sunderland twice a week, after moving there from Wishaw in Scotland in 2015

He says he tries to play ‘something for everyone’ mindful that neighbours can hear, but not everyone is a fan.

The father of two was hurt and angry because of the missive from an anonymous critic, purportedly writing on behalf of several neighbours, complaining about the ‘disgraceful disturbance’ he is ‘causing to (his) neighbours’.

Scottish bagpiper Alan Jamieson, 37, who now lives in Sunderland, was left stunned when he received a letter of complaint about him practising at home calling his music a ‘racket’ 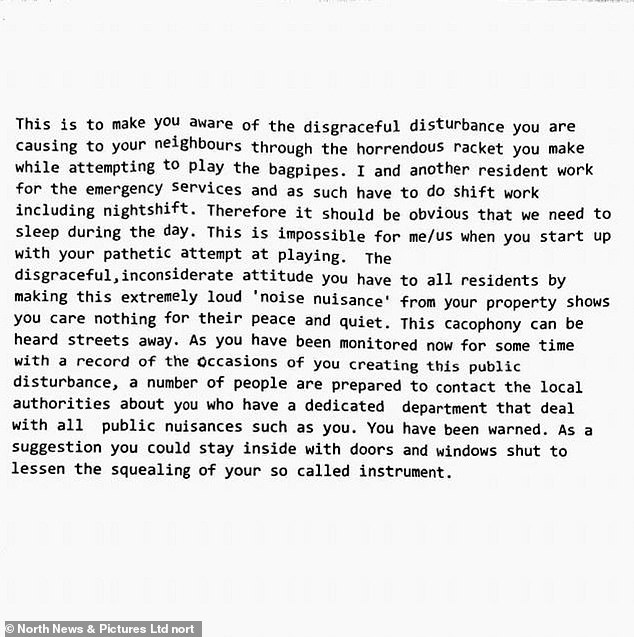 It makes reference to the ‘horrendous racket you make while attempting to play the bagpipes’, his ‘pathetic attempt at playing’ and his ‘so-called instrument’.

It also says: ‘This cacophony can be heard streets away.’

It adds: ‘As you have been monitored now for some time with a record of the occasions of you creating this public disturbance, a number of people are prepared to contact the local authorities about you who have a dedicated department that deal with all public nuisances such as you.’

The anonymous writer, who typed the letter and sent it by second-class post, tells him: ‘You have been warned.’

Alan, an IT manager with the Ministry of Justice who lives with his wife Georgia and their sons Harry, three and month-old Benjamin, plays with the City of Newcastle Pipe Band.

Over the years he has won a number of trophies for his piping and has performed in Moscow’s Red Square and on Russian national television.

He said he only practises outside twice a week for 30 minutes at around 4.30pm. 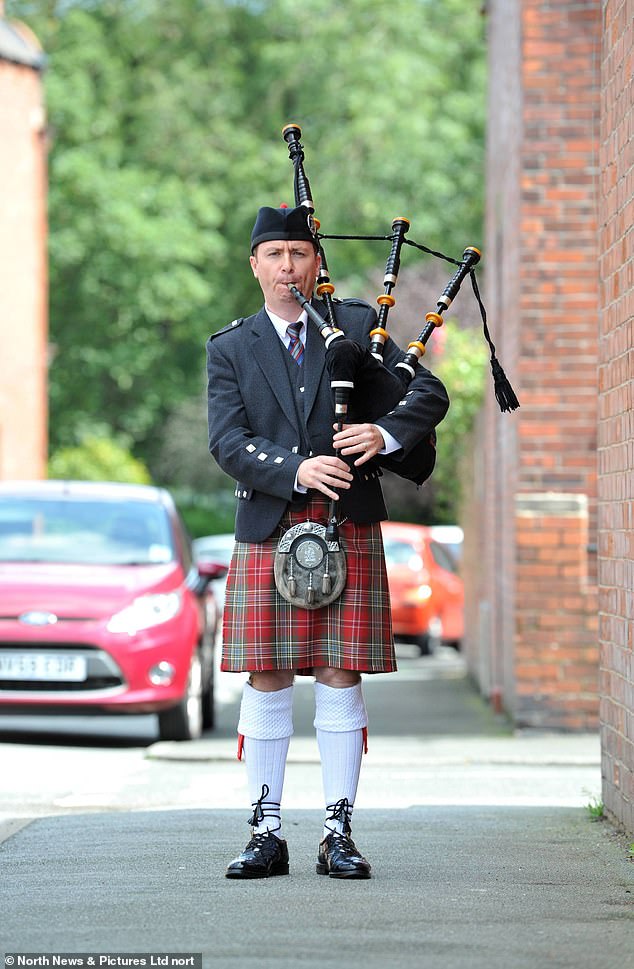 Several neighbors told Alan they liked his playing, which he keeps up to avoid the bagpipes falling out of tune

Alan said: ‘I was more hurt than angry, it’s disappointing that someone would send a letter filled with insults than come and knock at my door and have a reasonable conversation.

‘The fact that this person knows where I live suggests it’s someone who lives nearby and perhaps and can see into my home when I’m practicing outside.

‘The letter was very insulting, I’m an accomplished player and I’ve won a lot of competitions but there were references to it sounding like the squealing of cats, which it certainly was not.

‘I play a range of tunes, some traditional and some contemporary. I was very aware that my neighbours would be able to hear so I tried to play something that would suit everyone.

‘The letter arrived on August 7th, not long after I’d started to play my pipes outside and was genuinely shocked by the content.

‘If they really are emergency workers then they could have come to speak to me and I would have accommodated them, but the tone was vindictive and they obviously wanted to do things that way, even the envelope was type-written. 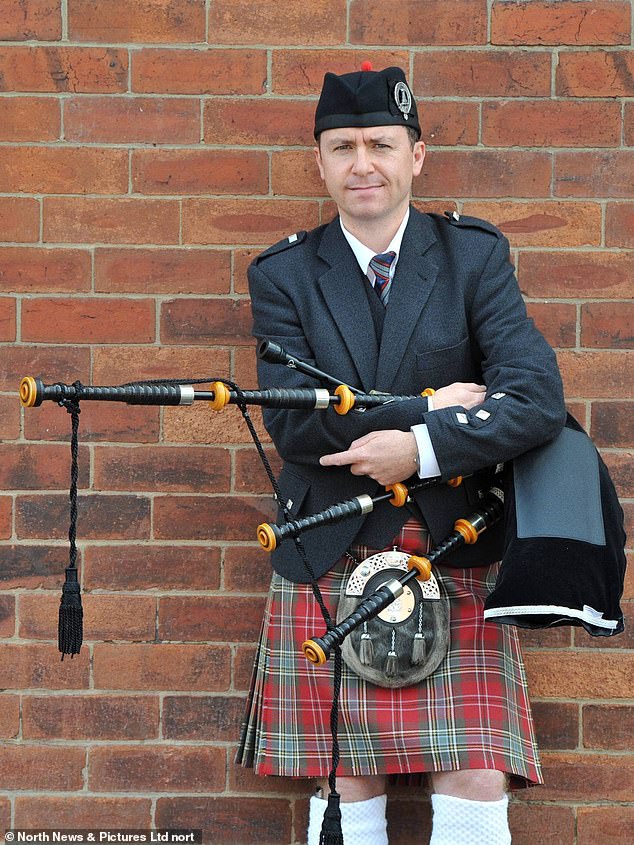 Alan said he was more hurt than angry because of the letter, which referred to his ‘so called instrument’

‘I only started playing outside because my close neighbours suggested it, they liked what I was playing and that felt quite good. Whoever these people are who hate my playing appear to be in the minority, I certainly hope so.’

He added: ‘It was a really disparaging and horrible letter to send. I doubt they’ve ever met me.

‘It’s a loud instrument. There’s no doubt about it. I’m very mindful of that and that’s why I was quite reluctant for some time to practise at home.’

Several neighbours complimented Alan’s playing and said they had no problem with it.